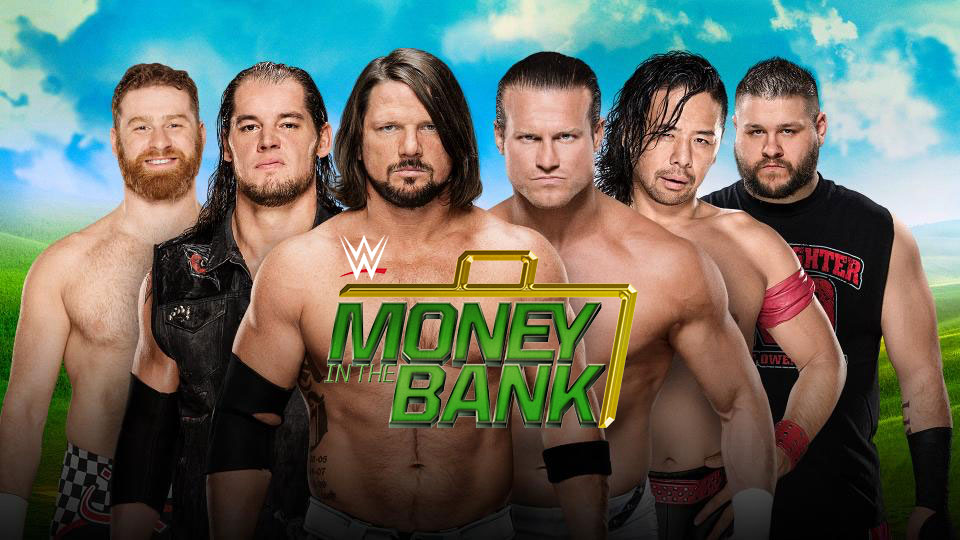 Kickoff Show Match
The Colons vs. The Hype Bros

The Hype Bros got a pretty decent pop. After early domination by the Hype Bros, the Colons attacked and worked on Zack Ryder’s surgically repaired knee and took control of the match. Zack Ryder finally tagged in a hyped up Mojo Rawley and he came in and cleaned house. The Hype Bros hit their “Hype Ryder” tag team finisher for the win.

There were several spots where the women climbed up and got close, but were stopped. Charlotte hit a twisting flip from the top rope to the outside onto Natalya and Tamina. Becky Lynch took out Carmella in the ring and got her hand on the briefcase, but James Ellsworth ran in and pushed the ladder down. Ellsworth tried to revive Carmella, but couldn’t. He looked up at the briefcase and the crowd chanted “Yes! Yes! Yes!” Ellsworth climbed up and grabbed the briefcase and threw it down to Carmella. She grabbed it and the bell rang!

Three referees were on the outside arguing and Ellsworth grabbed a mic and said, “Your winner and first ever Miss Money in the Bank, Carmella!” Carmella’s theme hit and I guess she’s the winner. Carmella celebrated with Ellsworth and the briefcase. 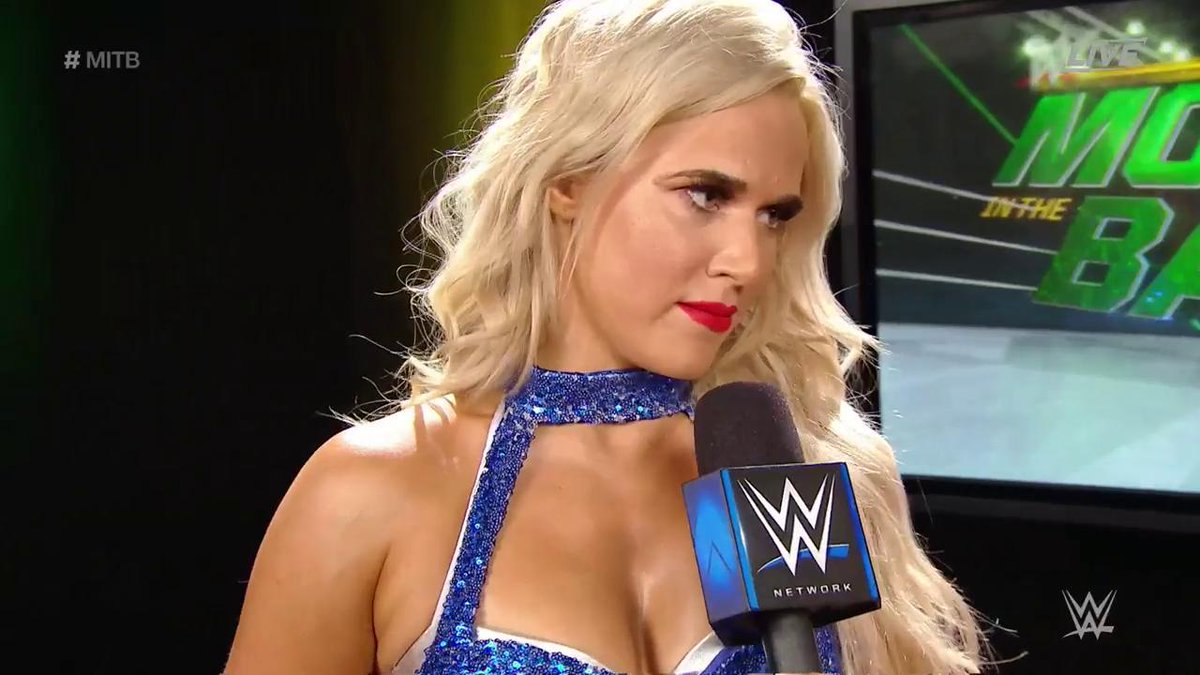 Lana said that the women were very lucky that she wasn’t in the ladder match and she was going to silence all her doubters tonight.

The New Day cut a promo as they entered, calling The Usos “The Boo-sos” and doing their usual schtick. The Usos controlled Kofi Kingston for like 8 minutes until he finally tagged in Big E, who hit a belly to belly on Jimmy Uso. Big E then tagged in Kofi again for some reason and hit a spear on Jimmy as he stood on the apron, sending both of them outside. In the ring, Kofi and and Jey battled for a while. Jey jumped down off the middle rope but was caught by Big E, who hit a Big Ending, but the pin was broken up at the last second. Kofi dived backwards from the top rope onto both Usos on the outside. New Day then hit their “Midnight Hour” finisher, but one of the Usos dragged the other one out of the ring to break up the pin. The Usos grabbed their tag team titles and started walking away from the ring and the referee counted them out. Oh God.

Winners by Count Out: The New Day 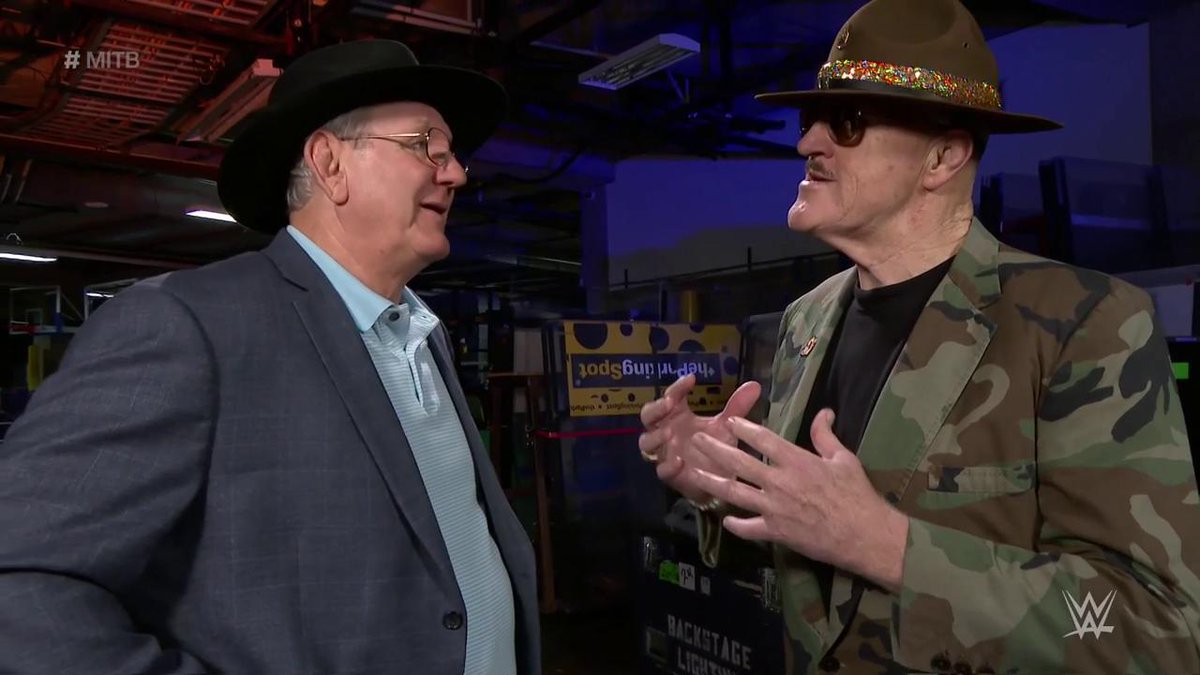 Backstage, Cowboy Bob Orton and Sgt. Slaughter were shown talking to each other.

Lana’s outfit looked good… The bell rang and Naomi furiously started attacking Lana in the corner. Naomi dominated for a couple of minutes until Lana grabbed her leg and slammed it on the top rope. Lots of heel-like screaming and angry facial expressions by Lana. Lana hit a couple of snap suplexes, causing Naomi’s legs to land on the ropes. Lana continued to work on Naomi’s legs for a few minutes until Naomi nailed her with a couple of high kicks. Naomi then hit the “Rear View” but Lana kicked out and rolled out of the ring, then kicked Naomi in the head as she chased her. Lana then hit a sit-out Spinebuster and went for a pin, but Naomi kicked out.

Suddenly, Carmella’s theme hit and she came out with the Money in the Bank briefcase (and James Ellsworth) in the middle of the match. She went to cash it in to the time keeper, but then decided not to and instead taunted and waived at Lana and Naomi.

In the ring after the distraction, Lana went for the sit-out Spinebuster again, but Naomi reversed and suddenly locked on a submission and Lana tapped…

Fandango and Tyler Breeze were in a Miami Vice parody called “Fashion Vice.” Fandango said he was still working on finding the dirtbags that attacked Tyler Breeze. They got a fax that said “ANSWER THE DOOR.” At the door was a VHS tape that said “WATCH ME.” They put the tape in and two shadowy figures with disguised voices said, “We’re the ones who attacked you. You want to know who we are? Meet us in the ring tonight.”

Mike Bennett and Maria Kanellis came out on the entrance ramp, wearing headset microphones, introducing themselves as “Maria Kanellis and Mike Kanellis.” Maria said that the first lady of WWE was back and for the past seven years, she’s been searching for the perfect partner, and she found Mike. She said she was there to educate everyone on SmackDown about the power of love. Their theme music hit and they kissed and smiled at each other lovingly… Nice. Very good gimmick.

Greg Gagne, Larry Hennig, Baron Von Raschke, Sgt. Slaughter, Bob Orton, and Ric Flair were introduced in the front row. The Singh Brothers came out and introduced Jinder Mahal, who looked very angry and cool. The crowd was very into this match at the start and it had a “big fight” feel.

Orton dominated the match for about five minutes until Jinder tossed him to the outside of the ring, causing Orton to land awkwardly on his leg. Mahal started attacking his leg and they wrestled on the outside until Orton tossed Mahal onto the ringside barricade in front of the old school wrestlers. However, Mahal then tossed Orton knee-first onto the announce table and continued working on his leg. Orton went for an RKO out of nowhere, but Mahal escaped and continued to work on Orton’s knee. Mahal locked on a Figure Four Leglock and gave a “woooo” in front of Ric Flair, but Orton reversed it and broke it up. Mahal worked on his leg for like another 5 minutes and went for a superplex, but Orton blocked it and hit Mahal with a superplex off the top of his own and followed it up with some offense finally.

Orton hit a DDT then did his RKO taunt… Jinder got up and Orton hit the RKO. 1-2… one of the Singh Brothers put Jinder’s foot on the rope. Orton argued with the referee and the ref ejected the Singh Brothers. As they were walking out, they got into an argument with the old school wrestlers in the front row, then grabbed Bob Orton, but Randy Orton ran out and attacked them both. He tossed one of them into the time keeper’s area, then dropped the other dangerously on his neck again on the announce table. He then hit him with an RKO and grabbed the other Singh Brother and hit him with an RKO through the announce table.

Orton finally went back into the ring but Mahal immediately hit him with the Khallas for the win.

Breezango vs. The Ascension

Breezango came out first and then The Ascension’s music hit. I guess they are the mystery team who attacked Tyler Breeze. No crowd reaction… The Ascension basically dominated this match for like 5 minutes until Fandango suddenly rolled up Konnor in a small package for the win…

During Shinsuke’s entrance, Baron Corbin suddenly ran up from behind and attacked him, then nailed him with a cameraman’s camera. Nakamura was laid out as medical staff and referees checked on him. Corbin went into the ring and the match officially started. Good heel move by Corbin…

Corbin and Ziggler teamed up briefly to nail AJ Styles with a ladder, but Ziggler then nailed Corbin with a superkick. A couple of minutes later, Corbin paid him back with a Deep Six on the outside. Owens climbed to the top rope, but Zayn ran in and tossed Owens down right onto a ladder. Ziggler tried to hit a superkick on Zayn, but Zayn blocked it and hit a Blue Thunder Bomb. Corbin came in and took out Zayn. Styles, Corbin and eventually Ziggler fought over the ladder and each got close to the briefcase until Ziggler hit Corbin with a Zig Zag. Ziggler climbed the ladder, but Zayn joined him. They both climbed up and Zayn hit a huge sunset flip powerbomb off the top of the ladder. Crazy.

Zayn then hit a Dragon suplex on Owens on the apron. Damn. Zayn climbed the ladder but AJ Styles hit him with a Phenomenal Forearm out of nowhere. On the outside, Baron Corbin set up a ladder on the steps and the announce table and chokeslammed AJ Styles on top of it. Corbin went into the ring but was hit with a Helluva Kick. Zayn climbed the ladder but Owens stopped him and kicked him in the balls. Owens climbed and got his hands on the briefcase, but Styles stopped him and eventually hit him with an Attitude Adjustment off the apron onto the ladder on the outside that was set up on the stairs/announce table. AJ Styles climbed the rope and grabbed the briefcase, but Ziggler moved the ladder away and Styles was left hanging from the briefcase, then fell down.

Corbin attacked Ziggler and set up the ladder, but Shinsuke Nakamura’s theme hit again. Nakamura ran out and the crowd sang his theme music as he nailed Corbin with kicks. Kinshasa off the top rope and another regular Kinshasa. Zayn ran in but was hit with an Exploder and Kinshasa. Nakamura went to the outside to grab a ladder, but Kevin Owens was hanging onto it and wouldn’t let him bring it in. Nakamura hit Owens with a Kinshasa and set the ladder up in the ring, but as he began to climb, was immediately met by AJ Styles on the opposite side. They stared at each other for a few seconds and both moved the ladder aside, then faced off in the middle of the ring. They exchanged blows until Nakamura hit Styles with an Exploder, then called for the Kinshasa but AJ Styles nailed him with a big flying punch. Styles climbed the ladder, but Nakamura got up and climbed on the other side and they fought on top of the ladder. Dueling “AJ Styles” and “Nakamura” chants. Baron Corbin then ran in and pushed the ladder down, taking both men out. Corbin then climbed up and grabbed the briefcase! Corbin celebrated in the ring with the briefcase as the show came to an end. 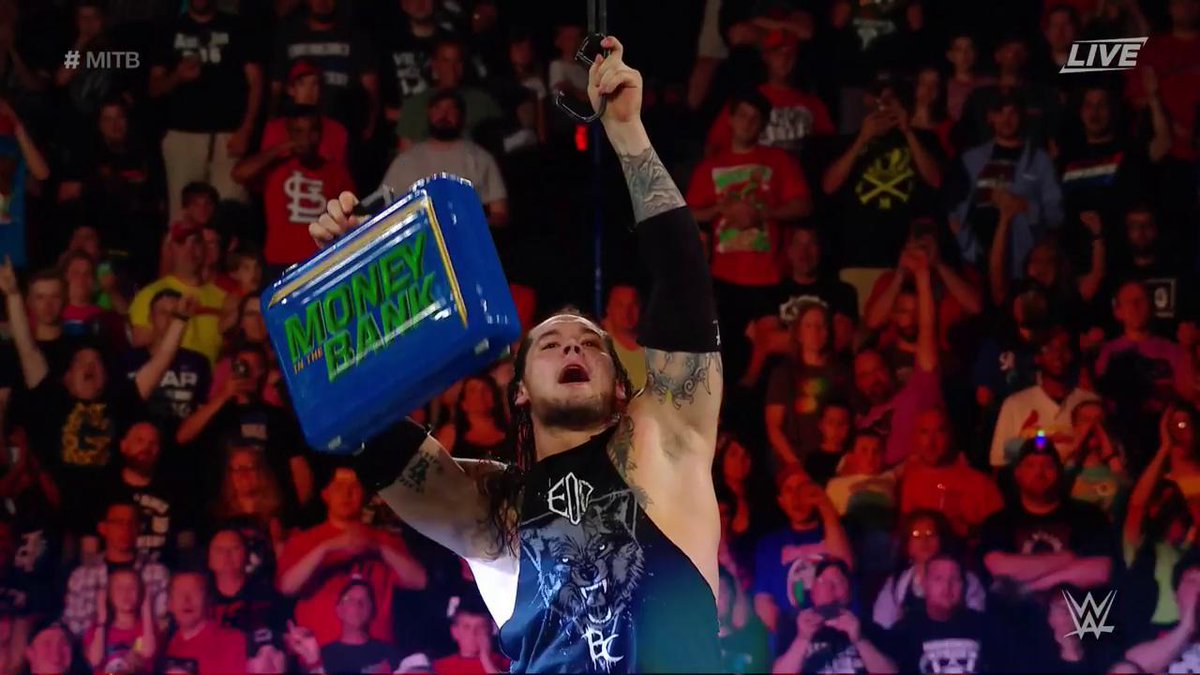