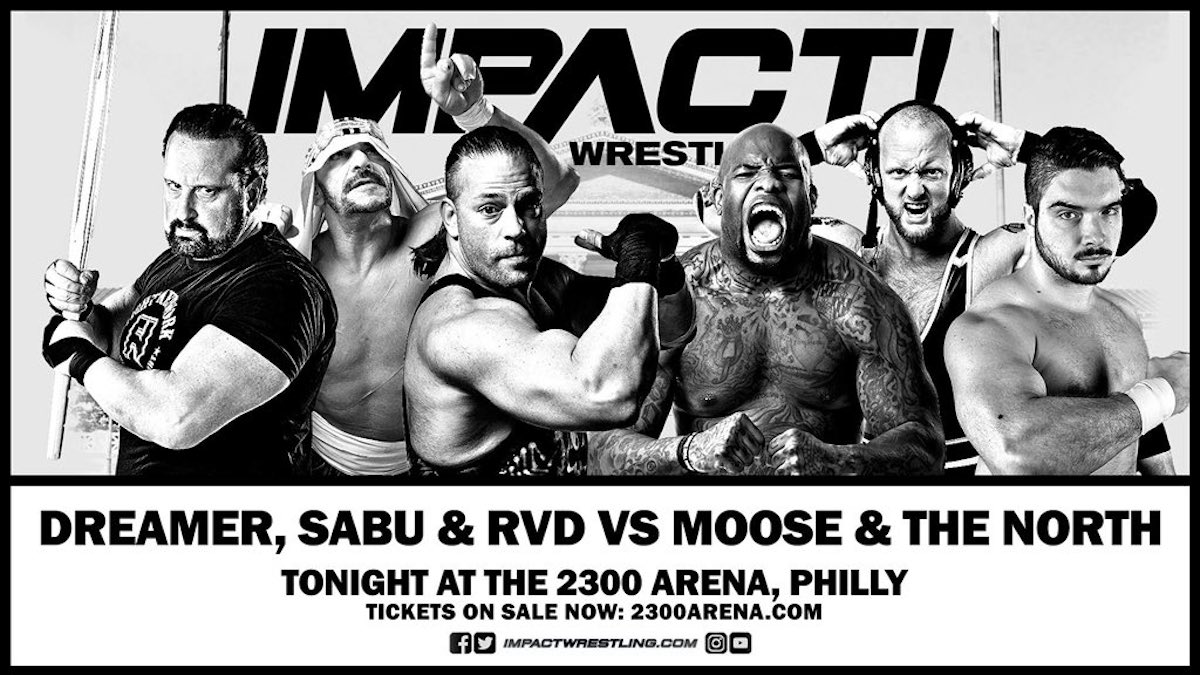 Tessa Blanchard defeated Glenn Gilbertti in about 30 seconds. Tessa got a huge ovation. Before the match, Disco says “tonight, I’ll be your daddy.”

In-Ring: Moose, Ethan Page, Josh Alexander – They cut a promo in the ring. Moose and Don Callis get into a bit of a argument after The North run down ECW.

Scoop 9: Moose, Ethan Page, and Josh Alexander are in the ring for a promo. #ImpactWrestling pic.twitter.com/zNdfFqiSMi

No DQ Match: Eddie Edwards defeated Killer Kross – You know it’s a no DQ match cause Eddie is in jeans. Sandman runs in and helps Eddie Edwards get the win. After the match, they play Enter Sandman and drink beers in the crowd. Sandman gave Eddie Edwards his own Singapore cane to replace the one Kross broke last night.

Willie Mack & Rich Swann defeated Mike Elgin & Johnny Impact – Swann pins Johnny Impact for the the win. Before the end, Elgin and Impact bumped into each other and Elgin left him and went to the back.

Rosemary vs. Taya Valkyrie – Su Yung still on a chain at ringside. Jessicka Havok w/ James Mitchell is here and takes out Rosemary AND Taya! She leaves with Su Yung too.

OVE defeated Fallah Bahh & Scarlett Bordeaux – Scarlett just hit the Doomsday Device on Dave Crist! Only got a 2 count. OVE win after Dave Crist hits Fallah Bahh with a roll of quarters. After the match, OVE attack Scarlett but Tessa Blanchard makes the save.

Xplosion: Su Yung defeated Alisha Edwards – Su just damn near killed Alisha with a sidewalk slam on the ring apron. One of the nastiest looking bumps I’ve seen in a while. Got a holy shit chant from crowd. Su wins via Purge submission.

Ace Austin defeated Cousin Jake – Desi Hit Squad come out to distract Cody Deaner, which allows Ace Austin to get the win. Ace had nothing to do with the interference but didn’t help the Deaners either.

Tommy Dreamer, Rob Van Dam & Sabu defeated Moose, Ethan Page & Josh Alexander – Ethan Page gets put thru a table then RVD hits a 5 star frog splash for the win. Dreamer says the ECW Arena is the house that Sabu built. Dreamer said RVD has had over 100 concussions and is still flying higher than ever. Dreamer says IMPACT is like ECW as it’s a bunch of misfits and castoffs. He ends the speech plugging House of Hardcore’s next show in June.