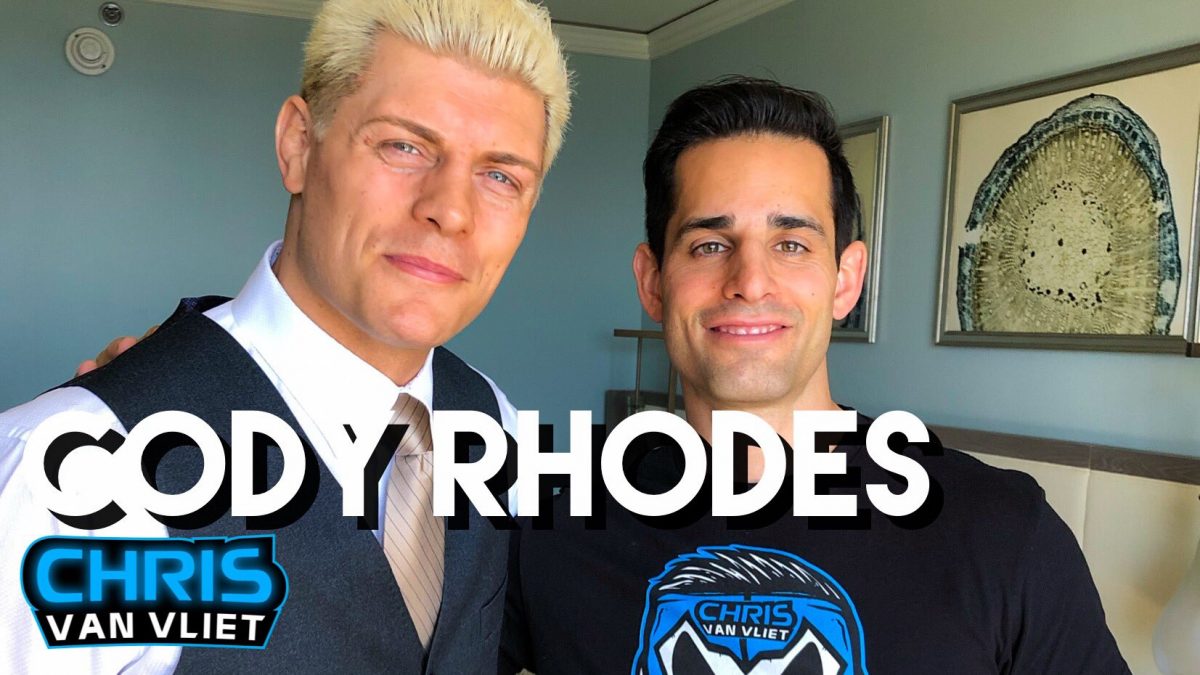 Cody was interviewed by Chris Van Vliet yesterday in Miami.

He covered several different topics and gave a lot of insight into what we can expect from Double or Nothing and AEW as a whole.

AEW on TNT will be a 2 hour live show that travels to different cities each week:
“It’s really likely the show is going to be 2 hours. That’s the sweet spot. In terms of the schedule we’ll find out probably within the next few months for sure and it will be in a great spot to be in prime time on TNT, they’ve really set us up. Now you’ve got to go deliver the bell to bells and the sports centric. Another thing that is really cool is you’ll be able to find out per market where we’re going to be all around, this isn’t going to be be something that is just stationed in one spot. This is a touring brand. We’re really, no pun intended, going all in on the concept of it and it’s so special because we aren’t doing a live event system so when we come we’re bringing our absolute best from match quality to star quality. I feel like I’m giving away a lot here. Did Tony already say it? It’s 2 hours, live.”

The AEW World Heavyweight Championship will be unveiled at Double or Nothing and the Battle Royale winner will get a title shot:
“I’ve said title and I’ve said championship in our little circle now and everyone is really adamant that we say “belt”. On Saturday there is the chance that you might see the greatest World Championship Title that has ever been created and there’s also a chance that I might have showed Chris a picture of it before this interview. He might have got a sneak peek. It’s really great. Every day the progress shots have been cool and I’ll be able to see it. I’m not guaranteeing it will be there on Saturday, (Cody winks to the camera) but that was a wink, and I’m excited about it. But actually the stakes of the Battle Royale and getting that opportunity to potentially wrestle for the World Championship and to wrestle for the World Championship, every match has high stakes placed on it.”

Is he still on good terms with WWE?
“I would think I do but it’s dawning on me that I likely don’t if that makes any sense. I would think that we are still. I learned a lot there, I had a great time, I met my wife and I also got to wrestle some of the best. The Undertaker was still pretty active, I got to be in there with Taker. Shawn Michaels was active, I got to be in there with Shawn and Hunter himself. But I don’t know maybe I’m not too well received. We were kind of always the enemy, me and my family. We were like the bastard family of wrestling. Dusty was always an individual, he never really fit into the corporate structure. He did great there and they really took care of him but I think we were always kind of the enemy.”

How far ahead have they planned out storylines?
“I’d say we have a pretty good bearing on 6 months to a year. Exactly that. Long form storytelling is great in every medium whether it is film or TV or whatever it may be to know and work backwards. We’ve got a good, what would I call it, like a syllabus? There’s a syllabus to what we’re going to do but one thing that Matt Jackson is really good about pointing out is some things just catch fire and one thing that we want to do differently than any other wrestling that’s out there is you can’t deny something when it catches. So if something catches, we’re going to push that, we’re going to promote that. If an individual catches, we’re going to push that, we’re going to promote that. And that all starts at Double or Nothing.”

Will there be pyro at Double or Nothing?
“Yeah there is. But you say that and I don’t run a pyro company so I haven’t seen the rehearsals. Honestly, it’s got to be big pyro. Because if you do like sparklers, which are cool, if you do those it’s like meh. You want rockets, you want like the big mortar bang that scares you to death. You want the big stuff.”

There are some surprises in store at Double or Nothing:
“I think what we have ready to go is the best wrestling show ever. I really do. It’s a wrestling show, by wrestlers, for the fans. It’s 100% fan service. It wouldn’t be that if there weren’t surprises.”