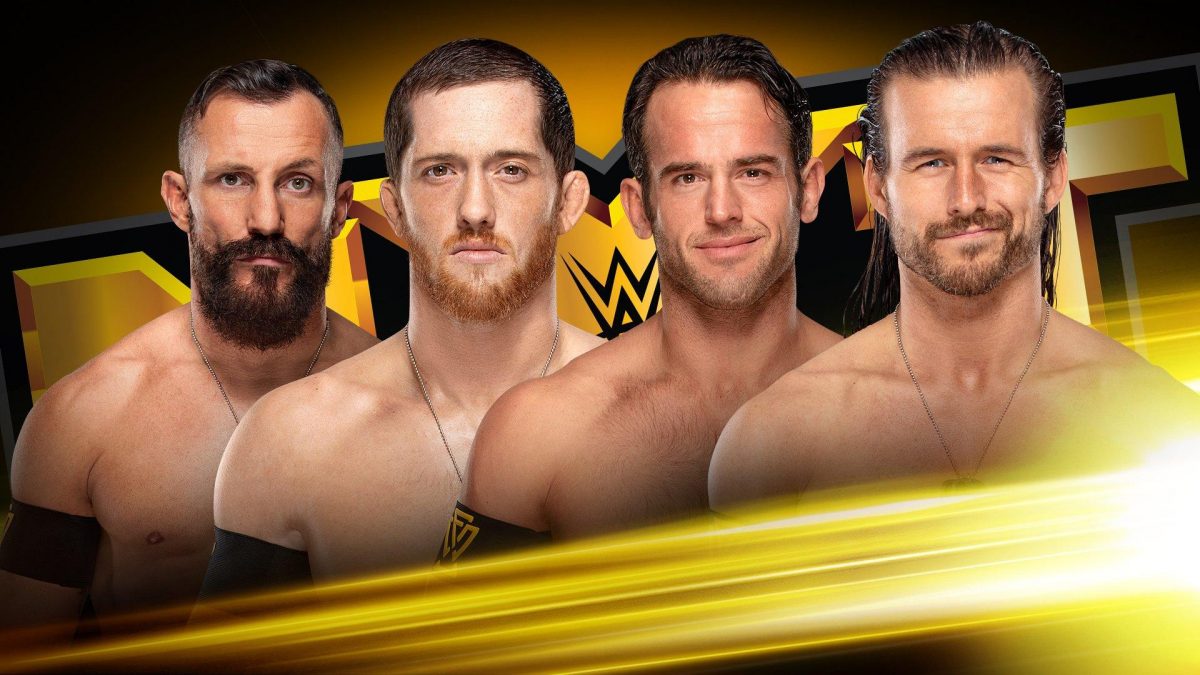 William Regal welcomes everyone to NXT. He mentions last week’s Tag Title Match and he says there are no tag team champions. The Street Profits pinned the Viking Raiders, but it was not a legitimate victory. At Takeover, the Street Profits will face the Forgotten Sons, Oney Lorcan and Danny Burch, and Kyle O’Reilly and Bobby Fish in a Ladder Match.

Adam Cole says they have heard the whispers in the locker room. All of you morons are probably wondering if the rumors are true. The Undisputed Era is going nowhere. They are stronger than they have ever been and they are on the same page. This is a message to everyone in the locker room. Your contract may say NXT Superstar, but we own you. We will not stop until we run this place. We will continue to take what we want, when we want. We will soon be draped in championship gold. That begins in just two weeks at Takeover. Kyle O’Reilly and Bobby Fish will regain the Tag titles. Adam says he will take the NXT Championship from Johnny Gargano.

NXT Men’s Champion Johnny Gargano interrupts and makes his way to the stage. Johnny says he will save Adam some time. If you want him to put his title on the line, then he will do it. Johnny wants Adam to tell the truth. He wants Adam to admit that he cannot beat Johnny on his own.

Adam wants a time out and he asks what kind of an idiot is Johnny. Adam reminds Johnny he won the first fall.

Adam tells Johnny to shut up. He says you can be as condescending as you want, but it eats you alive that he pinned Johnny by himself in New York. In two weeks, Adam Cole is going to do it again. As far as tonight is concerned, they are celebrating…

Matt Riddle comes from behind and he goes after The Undisputed Era. They work over Riddle but Gargano makes his way to the ring and Riddle kicks Strong to the floor and Gargano takes care of Cole.

They lock up and Maluta with a wrist lock and Mansoor tries for a reversal but Maluta holds on and takes Mansoor to the mat. Mansoor escapes and hits a head scissors take down followed by a drop kick. Maluta with a back heel kick and boot to the head and Samoan drop. Maluta with a boot into the corner and he goes to the turnbuckles. Maluta with a Codebreaker for a near fall. Maluta works on the neck.

Mansoor gets out of the hold but Maluta with a forearm. Mansoor with a back elbow and boot followed by a German suplex. Mansoor with a running kick in the corner and he goes to the apron and hits a forearm and follows with a slingshot neck breaker. Mansoor with a swinging reverse suplex for the three count.

Cathy Kelley is outside William Regal’s office and we hear screaming. They leave the office and Cathy knocks on the door. Regal is asked about what happened earlier. Regal says that he told the Undisputed Era that the way they conducted themselves the last two weeks, Matt Riddle will face Roderick Strong at Takeover. Tonight, Matt Riddle and Johnny Gargano will face Kyle O’Reilly and Bobby Fish.

Dream is interrupted by Tyler Breeze who makes his way to the ring. Tyler says Prince Pretty is home. He says much like Dream, when he was in NXT, he had everybody talking him. Ever since the Fashion left NXT, it feels a little lifeless and dull. There’s wannabe impersonators and cheap knockoffs and as flattering as it is, and it is flattering, there can be only one Prince Pretty . . . Tyler Breeze.

Dream says to allow the North American Champion to welcome Tyler back to the Dream’s NXT. The spotlight of the NXT Universe wants a real man, not a boy, especially a boy who plays cops and robbers. Just because you can’t cut it on Monday or Tuesday does not mean you can call for a spotlight here.

Breeze says not to confuse couldn’t hack it or couldn’t cut it and go with uninspired. Dream, you inspire him. That North American Championship inspires him. An inspired Tyler Breeze is too much and too big for you to handle.

Dream tells the Dollar Store Detective that maybe he forgot in catering that they do things different in his NXT. He says the line starts outside so that is where you should go. The Dream does not want to leave a bad taste in your mouth so how about a selfie with the champ.

Tyler asks if he should take a selfie with the champ? Tyler says it is a monumental moment. It is the first time they have been in the ring together. Dream tells Tyler to make up his mind quick because he doesn’t have all day.

Tyler agrees to do it and he has one last piece of advice. When you put your phone number on your trunks and no one calls, it is because no one is interested. Tyler punches Dream and leaves the ring.

Later backstage, Tyler Breeze is asked why did he attack Velveteen Dream. Tyler says he is an NXT OG. He wanted to introduce Velveteen Dream to an inspired Prince Pretty.

They lock up and LeRae goes for a rollup but Gonzalez stays on her feet. Gonzalez misses a clothesline but hits a Northern Lariat. Gonzalez with kicks in the corner. Reina with a spinning power slam on Candice for a near fall. Reina with a top wrist lock. Candice is sent into the turnbuckles but Candice with a kick and an arm breaker. Candice sends Gonzalez to the floor to counter a spinning power slam. Candice with a baseball slide and then she hits a springboard cross body but Gonzalez catches Candice. Candice gets to her feet and she sends Reina into the ring steps.

After the match, NXT Women’s Champion Shayna Baszler, Jessamyn Duke, and Marina Shafir make their way to the ring. Candice goes after Marina first but the numbers are too much. Io Shirai comes to the ring and she has a kendo stick and she goes after Jessamyn, Marina, and Shayna. Io hits Shayna some more before the champion can get out of the ring. 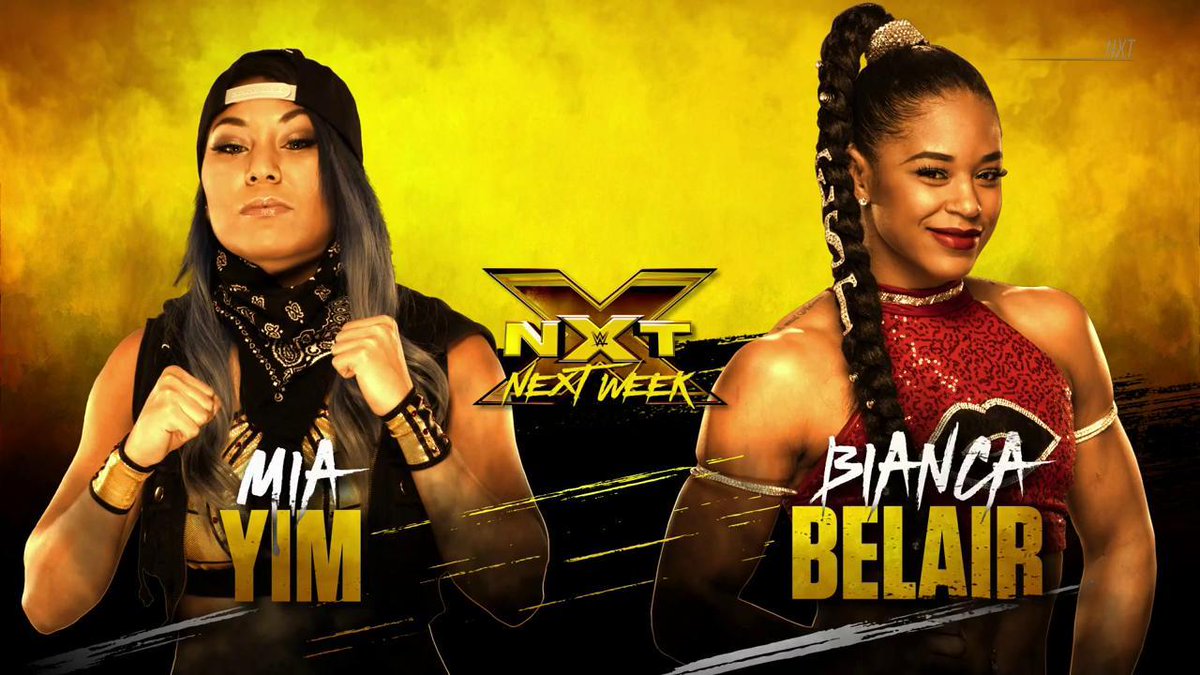 Velveteen Dream will defend the North American Championship against Tyler Breeze at TakeOver.

Kyle and Johnny start things off. They lock up and Gargano with a wrist lock. Kyle with a drop toe hold but Johnny with a front face lock and he gets a cover but Kyle keeps his shoulders off the mat. Bobby has some words for Kyle. They go for a test of strength and Kyle with a body scissors and then he applies a triangle but Gargano escapes and goes for the GargaNo Escape. Kyle is able to escape the hold. Gargano with arm drags but Kyle with a kick and front face lock. Fish tags in and he snap mares Johnny and applies a reverse chin lock. Fish with a punch and he sends Gargano to the mat but Riddle avoids a punch from Fish.

Adam Cole makes his way to the ring and Gargano with a suicide dive and he punches Cole. Strong with a jumping knee to Riddle while the referee deals with Cole and Gargano. Strong with a release suplex onto the apron and then Kyle and Bobby with a high low combination for the three count.

After the match, the Undisputed Era attack Riddle and Gargano. Cole with Last Shot to Gargano while Strong and Kyle hold Johnny.