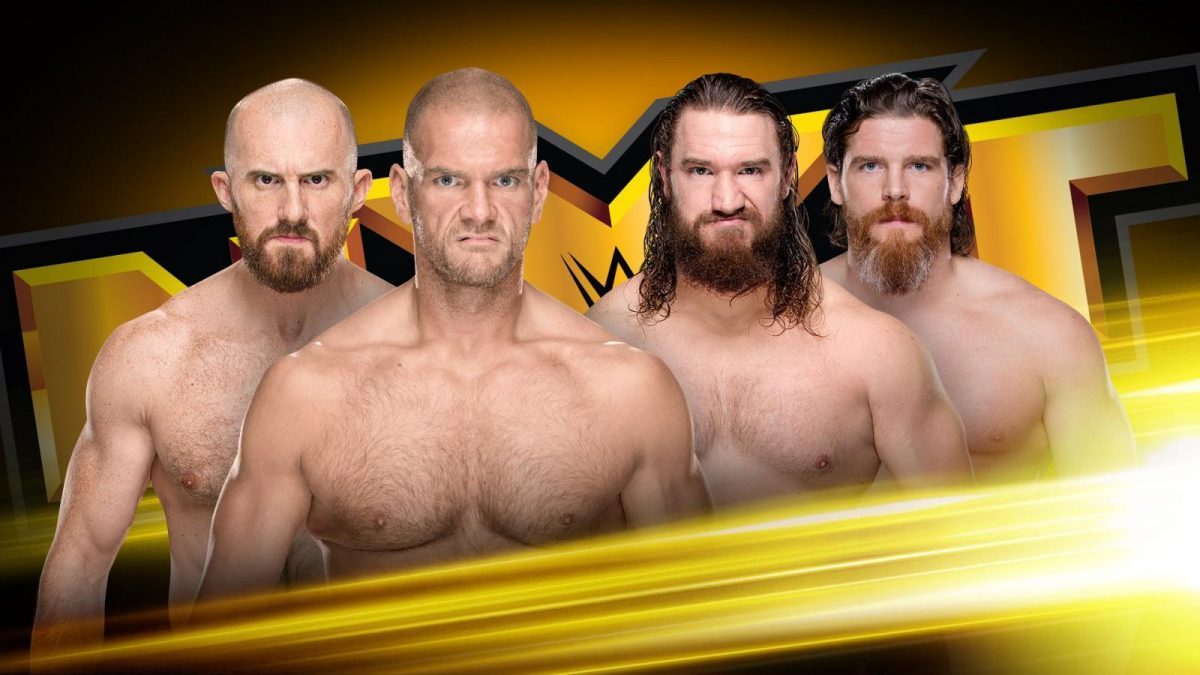 They have some words before Yim hits a drop kick that sends Belair to the apron. Belair drops Mia on the top rope and Belair with a near fall. Belair pie faces Yim and gets her up for a slam but Mia gets to her feet and she sends Belair to the mat. Belair with a double leg take down and he punches Mia but Mia turns Belair over and connects with punches. Mia with a shoulder to the knee and she kicks Bianca. Mia with a cannonball into the corner and she gets a near fall. Mia with kicks to the chest but Bianca blocks a kick and she sends Mia to the mat and connects with a boot to the head for a near fall. Bianca with forearms to the back and she gets a near fall. Bianca with a double overhook of the arms.

Belair with an Irish whip but Belair misses a shoulder when Mia moves and Belair goes into the ring post. Mia with Sole Food but Belair rolls to the floor before Mia can get her set up for a pinfall. Mia chases Belair when Bianca heads up the ramp. Mia with chops and Belair drops Mia face first onto the apron. Belair returns to the ring and Mia struggles to get back to her feet but she is able to get back into the ring before the ten count. Belair with forearms to the back and then Belair biels Mia by her hair. Belair with a second biel across the ring. Belair with a back body drop.

Mia grabs Belair by the hair and hits Protect Your Neck for the three count.

We take a look at the North American Title Match between Velveteen Dream and Tyler Breeze.

Dream pulls out a selfie stick for his promo. He says he remembers Tyler Breeze. Dream asks Tyler if he can remember the night he was going to Raw or Smackdown? That was the last night you got a standing ovation. Do you remember what the spotlight feels like? They say that Tyler Breeze was the man. Now you are standing in the spotlight but it is a little too hot for you. The NXT Universe has upgraded their cellular plan and that upgrade is the Velveteen Dream. Sold out arenas.

Tyler says he remembers Tyler Breeze. He wasn’t just a pretty face, he was a staple in NXT.

Dream says Tyler had a great career, but not a career worthy of a North American title match. He says that Tyler is a phony.

Tyler says it is time that he pushed Dream out of his spotlight.

Is @QoSBaszler worried about facing @shirai_io THIS SATURDAY at #NXTTakeOver: XXV??? … Not exactly. pic.twitter.com/vv1rmvjmHE

We are back with a look at what happened last week when Candice LeRae was attacked by Shayna Baszler, Marina Shafir, and Jessamyn Duke, but was saved by Io Shirai with her kendo stick.

Gulak with a slam and KUSHIDA kicks Drew away. Drew blocks a hip toss and then KUSHIDA does the same. KUSHIDA goes to the apron and he drops Drew’s arm onto the top rpoe. Drew with a gutbuster out of a fireman’s carry. Drew with a modified Koji Clutch and wrist lock but KUSHIDA escapes. KUSHIDA with a Stretch Plum but Drew escapes. Drew avoids a take down and Gulak floats over and KUSHIDA with a hip toss into a cross arm breaker but Gulak is able to lock the hands for a moment but KUSHIDA locks in the hold. Gulak with an ankle lock but KUSHIDA returns to the cross arm breaker. Gulak returns to the ankle lock.

KUSHIDA escapes and he avoids a charge into the corner by Gulak. KUSHIDA with an enzuigiri but Gulak blocks Back to the Future. KUSHIDA goes for the Hoverboard Lock but Gulak locks his hands. They scream back and forth. Gulak with a forearm but KUSHIDA with a flatliner into a rollup for the three count.

After the match, Drew has some words for KUSHIDA, but KUSHIDA does not back down from Gulak. Drew calls KUSHIDA a coward before leaving the ring. 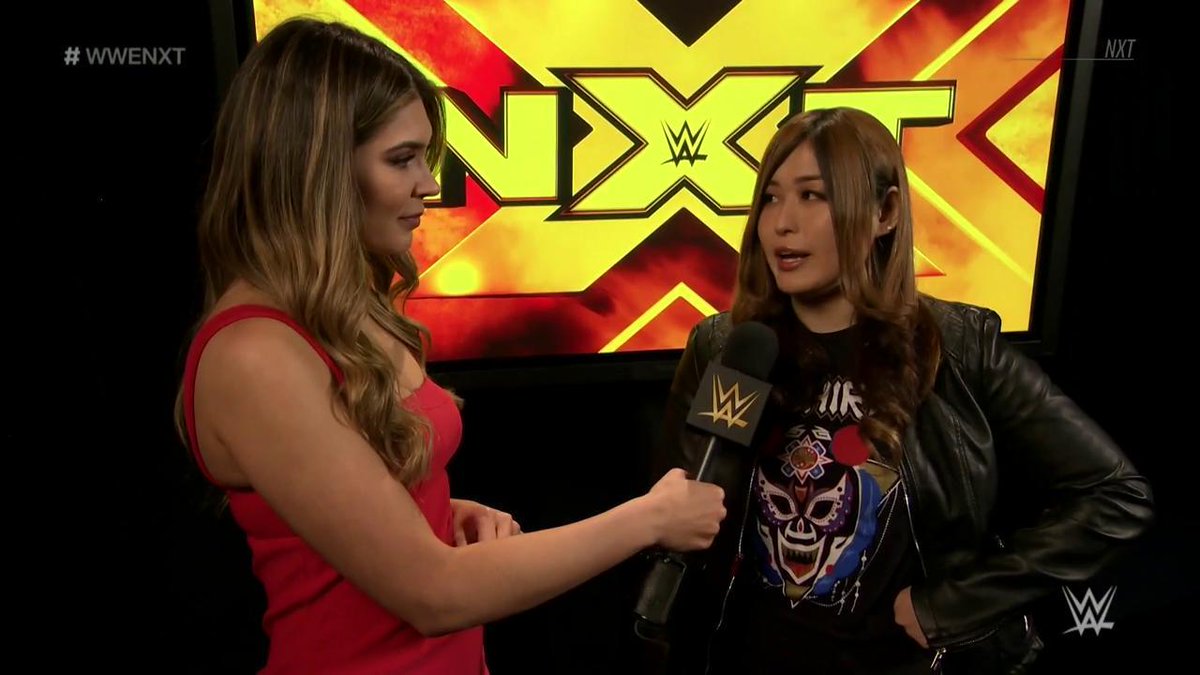 Io Shirai is in the back and she is asked about Shayna’s comments from earlier tonight. Io says she is not afraid of Shayna or her friends. She can bring them all to Takeover. Io says she does not need a kendo stick to beat Shayna.

Candice LeRae interrupts and thanks Io for helping her and she has her back at Takeover.

Adam Cole says he cannot stop thinking about Takeover New York because it makes him sick. If it was any other match, he would be the NXT Champion. He talks about watching Johnny as the champion. Johnny says he knows he was never meant to be the champion.

Gargano says he poured his heart out in the ring because he loves this. If Adam Cole wins, he does not know what happens to NXT.

Adam says he has taken NXT to new heights with the Undisputed Era. This is nothing that will stop him.

Johnny says he is fighting for the world.

Adam says the world is crumbling under the weight of Johnny’s shoulders.

Cole says this is a message for everybody. Johnny says he will not stop. Adam says it is not over until he is the champion.

Blake and Burch start things off and Burch with a drop kick and wrist lock. Burch with a leg sweep and kick to the arm. Burch with an arm bar. Cutler tags in and they hit a double back elbow. Cutler with kicks and punches in the corner. Blake tags in and they hit a double back breaker for a near fall. Cutler tags back in and Lorcan tags in. Lorcan wit hchops and European uppercuts. Ryker trips Lorcan and Blake with a Northern Lariat. Ryker is sent to the back by the referee.

The Street Profits attack Ryker on the stage and send him into the wall.

Lorcan and Burch go after Blake and Cutler but The Street Profits make their way into the ring and the referee calls for the bell.

The Street Profits stand across the ring from Lorcan and Burch. They start with punches but Cutler and Blake hit everyone with chairs.

Roderick Strong and Adam Cole hit Ryker from behind and send Ryker off the stage. Kyle O’Reilly and Bobby Fish attack Cutler and Blake as they go out of the ring after Cole and Strong. Cole with a super kick and Strong with a knee to Blake while Kyle and Bobby go high and low on Cutler. Adam Cole pulls a ladder from under the ring and the Undisputed Era pick it up and hit Ryker with it. They drop the ladder on Ryker’s back and then they set it up over Ryker while Cole climbs the ladder. Adam Cole tells William Regal and Gargano at Takeover, that is Undisputed.