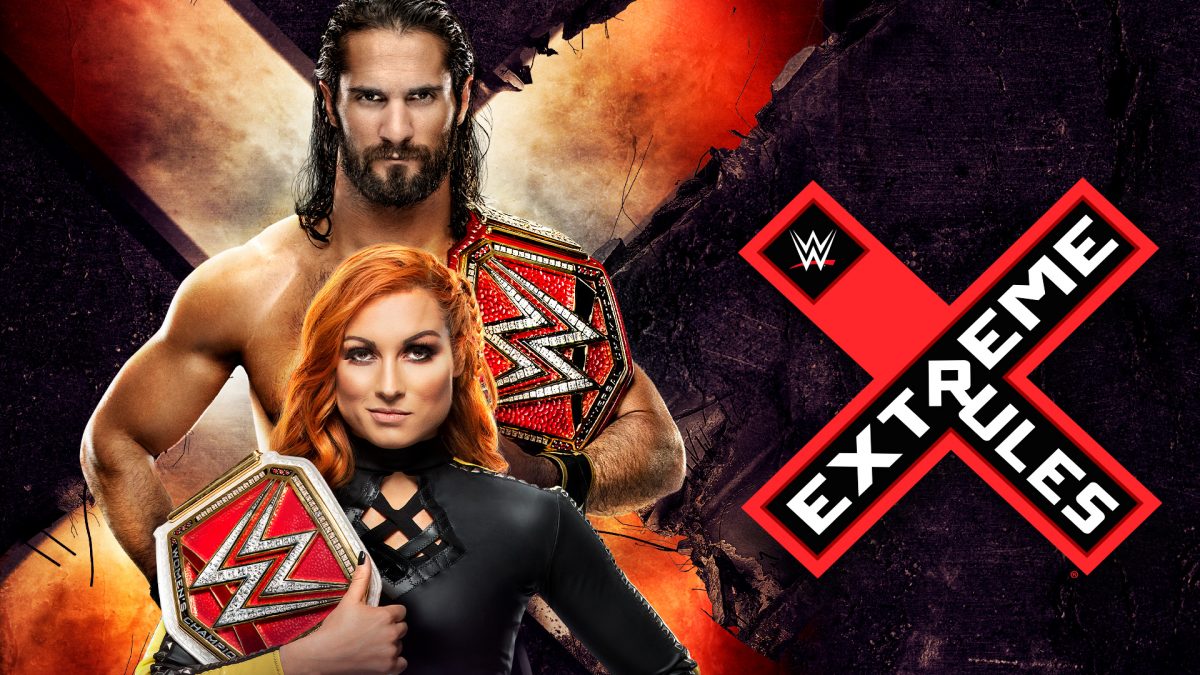 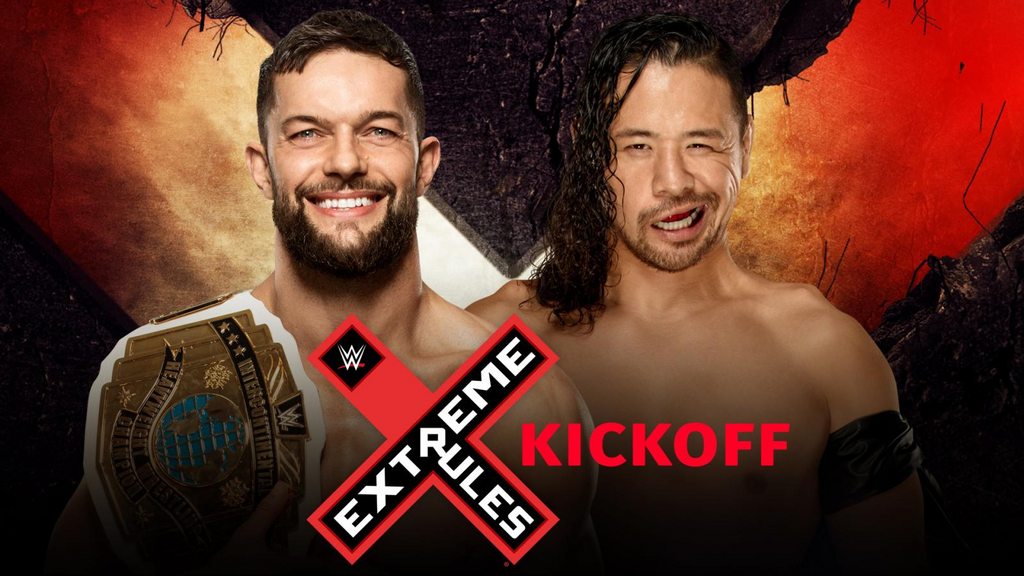 Towards the end, Nakamura ran at Balor in the corner but Balor moved and Nakamura smashed into the turnbuckles. Balor went to the top for the Coup de Grace, but Nakamura knocked him down.

Nakamura set him up for the Kinshasa and ran at him, but Balor jumped up and hit him with a double foot stomp. Dropkick into the corner by Balor, then he went back to the top for another Coup de Grace attempt… but Nakamura moved. Knee to the back of the head by Nakamura, then a Kinshasa! 1-2-3. New champ. 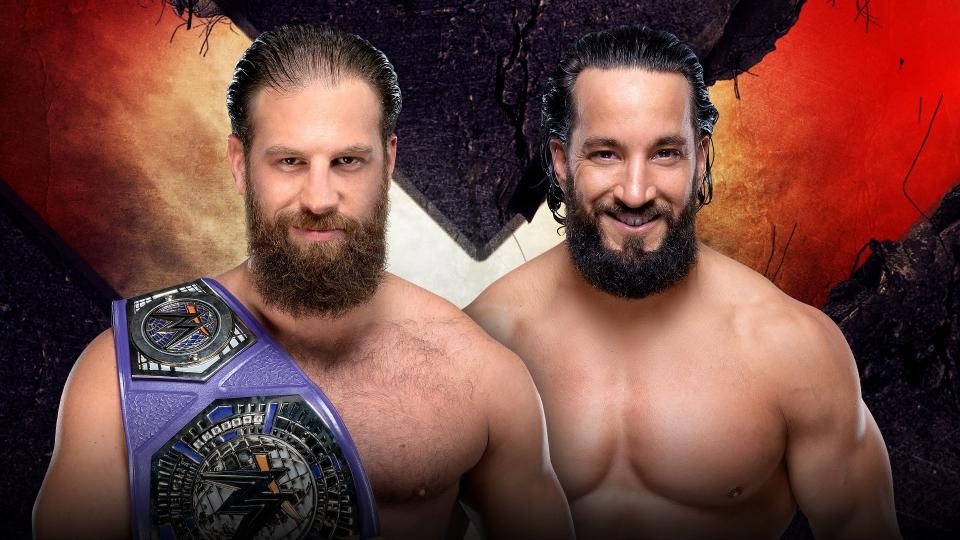 Towards the end, Nese went for a sunset driver, but Gulak countered into a powerbomb for a near fall. Gulak then hit a lariat for another near fall, then finally hit his “Cyclone Crash” (twisting neck breaker) finisher for the win. Pretty good match that got a decent reaction from the crowd. 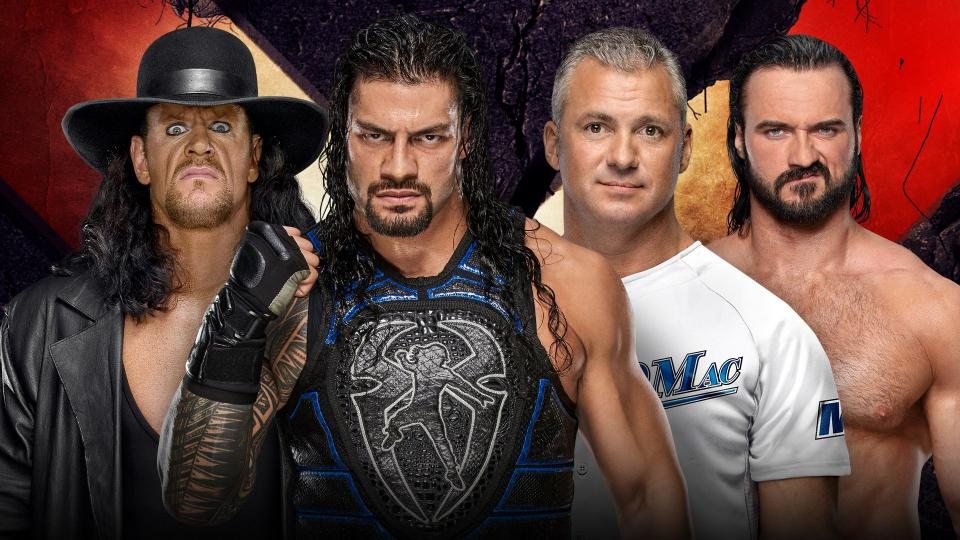 After all of the entrances, the bell finally rang for the first match at 7:18 ET, 18 minutes into the show…

A few minutes in, Undertaker nailed Shane with snake eyes, then a big boot, then he knocked him out of the ring. Undertaker cleared off the announce table and prepared to give Shane the Last Ride, but Elias ran in and smashed a guitar on Taker’s back.

McIntyre and Elias set Undertaker up on the announce table, Shane went to the top rope and hit a flying elbow drop on Undertaker through the table.

Reigns finally came back into the match and fought with McIntyre and Elias on the outside.

In the ring, Shane dragged Undertaker’s body into the middle of the ring but Undertaker suddenly sat up, vintage Undertaker. He grabbed Shane by the throat and chokeslammed him.

McIntyre entered and prepared to hit the Claymore on Undertaker but Roman Reigns ran in and speared McIntyre.

Reigns grabbed Shane and tossed him to Undertaker, who picked him up and hit him with a tombstone. 1-2-3.

Undertaker and Roman Reigns faced off in the ring in a show of respect after the match. 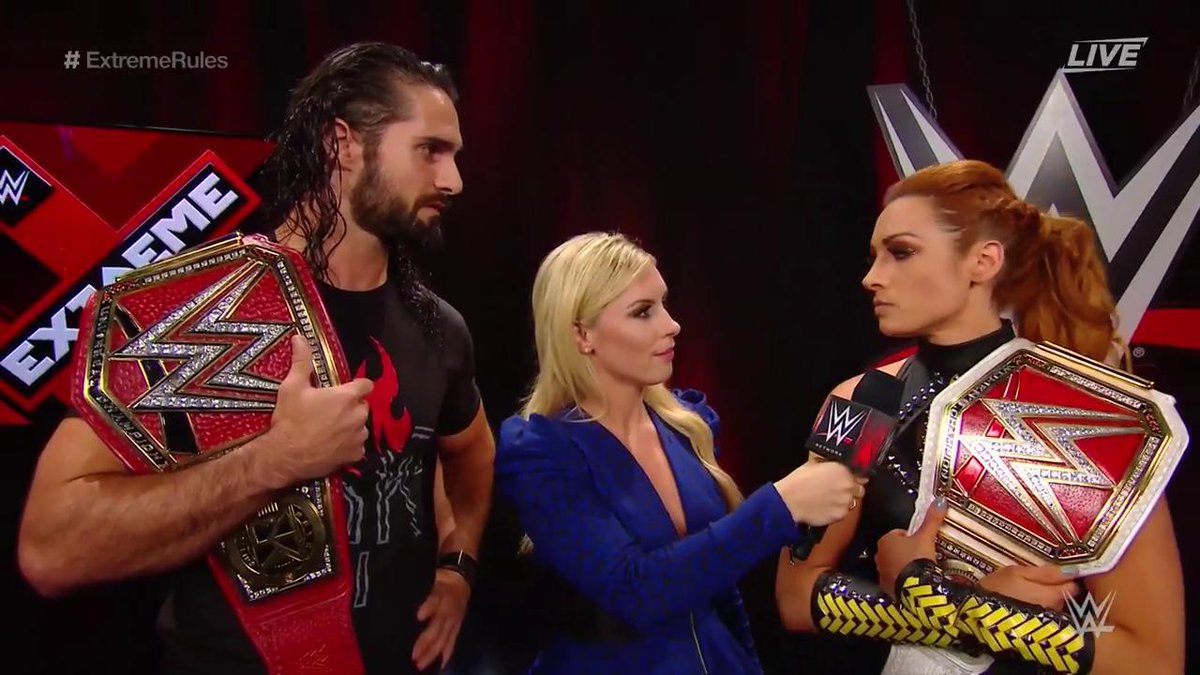 Rollins and Lynch were interviewed backstage. They said that they took a stroll through Philadelphia earlier, then cut a promo on Corbin and Evans. Rollins said that the liberty bell has a crack in it, just like Corbin’s head will have after Rollins stomps him tonight. They are not good on camera together.

Raw Tag Team Championship
The Revival (c) vs. The Usos 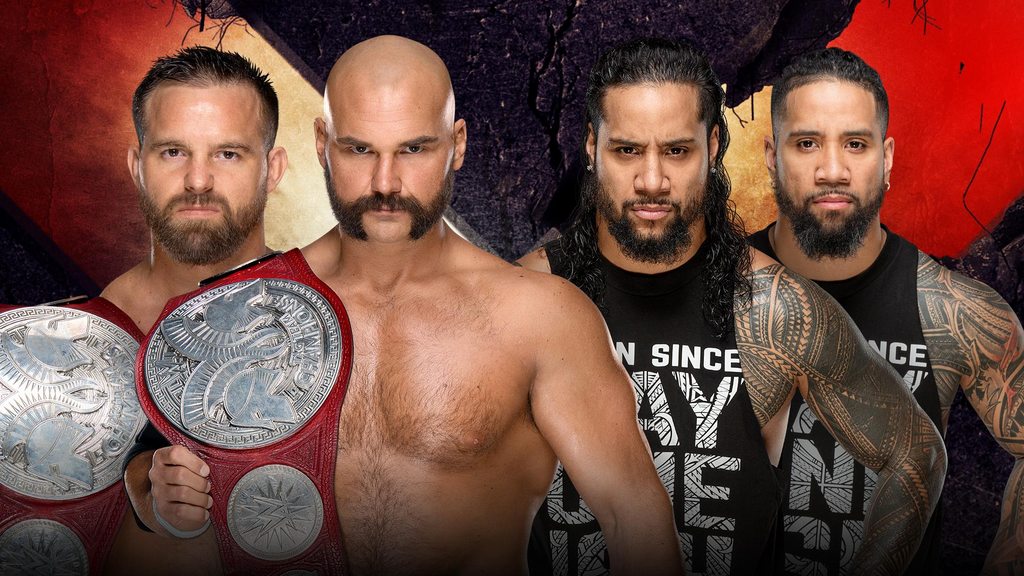 This was a pretty standard match for the first 10 minutes. In the end, Jey Uso nailed both members of the Revival with superkicks. He tagged in Jimmy and they prepared to do a dive to the outside, but Dawson grabbed Jey and tripped him up and dragged him out of the ring.

The Revival then nailed Jimmy with the Shatter Machine for the win. Not a very good match and the crowd didn’t seem too interested. 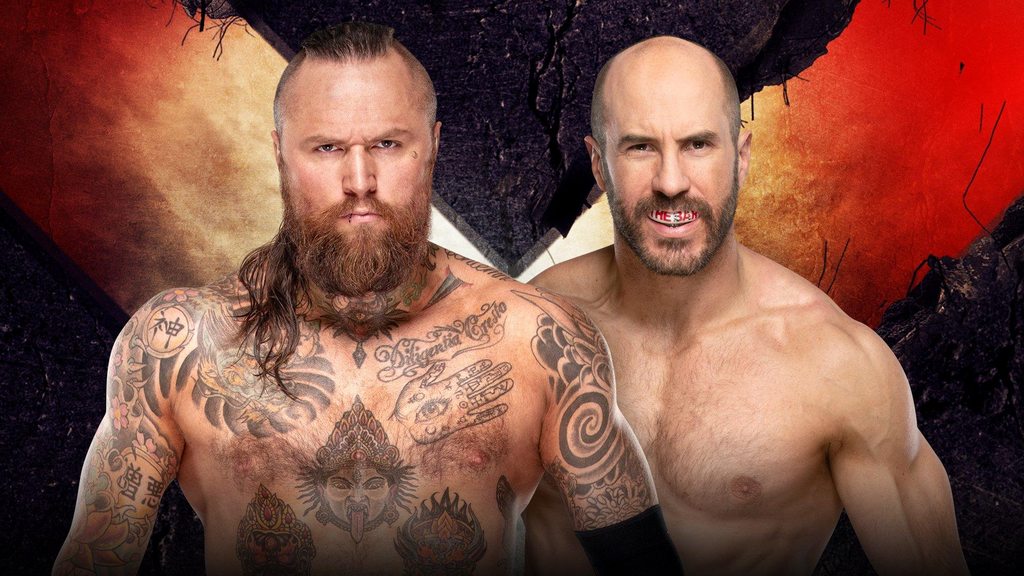 Black went for a Black Mass immediately, but Cesaro moved. Cesaro went for the Neutralizer, but Black escaped, and Cesaro sat down in the ring like Black does, taunting him.

A few minutes in, Black went for a meteora but Cesaro caught him, tossed him in the air and hit him with an uppercut.

Black hit a lot of kicks to Cesaro’s left leg and Cesaro sold like he was hurt.

They exchanged blows, then Cesaro went for the Neutralizer, but his leg gave out. Black hit him with a couple of kicks then smashed him in the face with a Black Mass… 1-2-3.

This was a really good match. 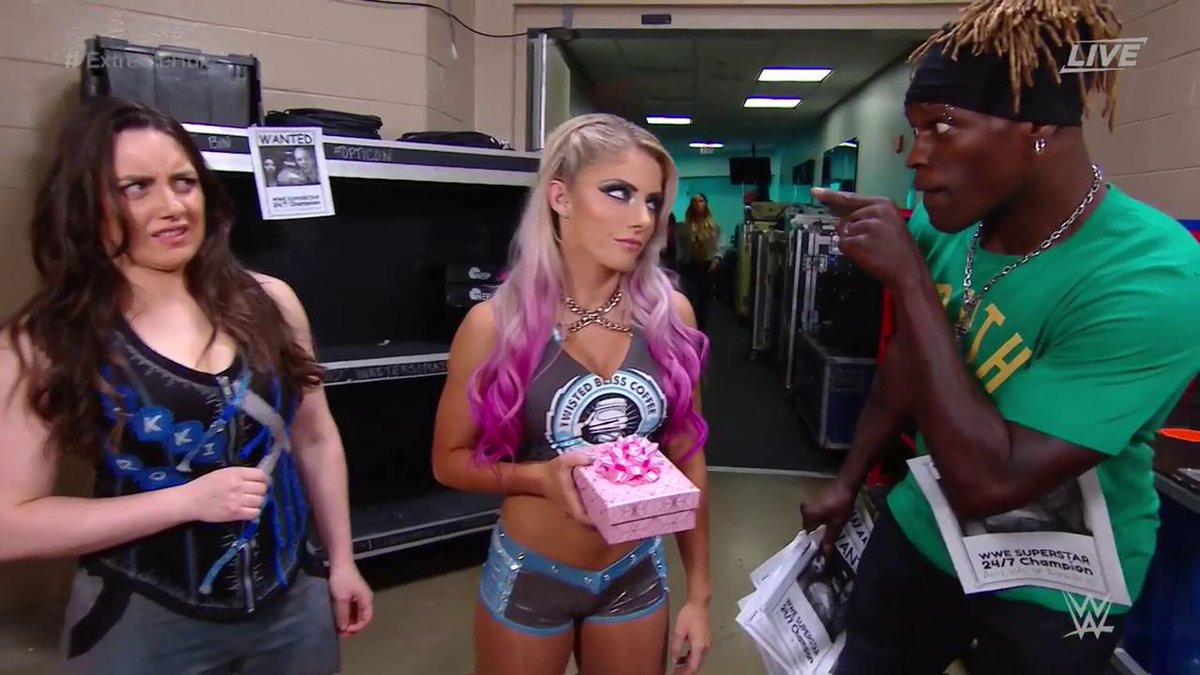 Backstage, R-Truth was putting up signs looking for “Hornswoggle” (Drake Maverick). Alexa Bliss and Nikki Cross walked in. Truth asked Bliss if she’s seen Hornswoggle, but Carmella grabbed him and told him that they had to go.

Alexa handed Nikki Cross an Alexa Bliss t-shirt and Nikki said that she loved it.

The Street Profits walked in and said that that was really cute, then asked Alexa “where the party at” when she wins the SmackDown title tonight. Alexa said that they’ll be co-SmackDown champions, and the Street Profits laughed at them. Nikki said that she’ll prove them wrong tonight and she and Alexa walked off. 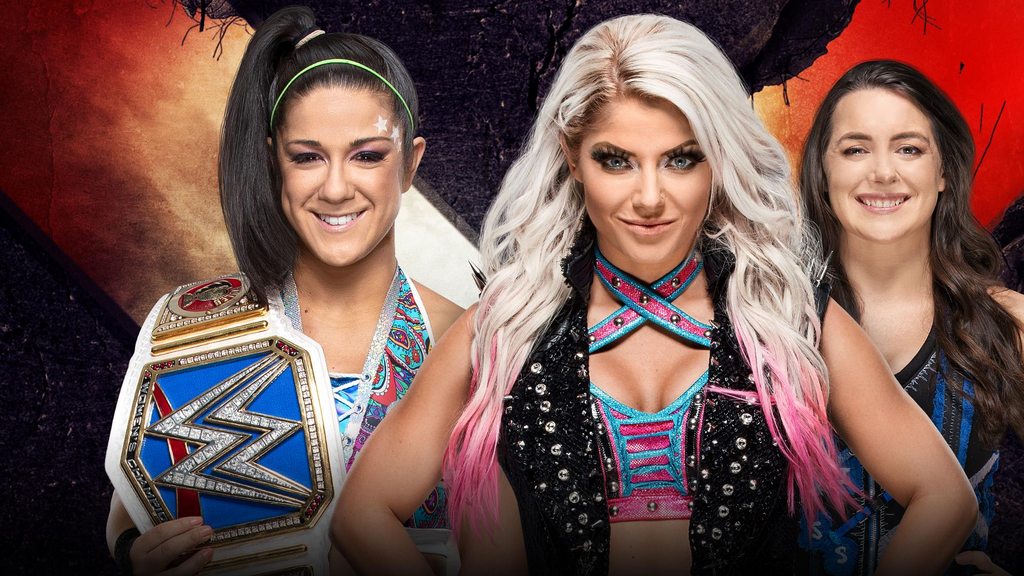 Bayley and Bliss had to tag each other in, so only one of them was in the match at a time.

Bliss and Cross controlled the match for the first few minutes, but Bayley finally fought back with a flurry of offense. Bayley locked on a leg lock on Nikki, but Alexa broke it up.

Later, after a distraction by Alexa, Nikki hit a tornado DDT on Bayley, then tagged in Alexa, who went for Twisted Bliss, but Bayley got her knees up. Alexa crawled over and tagged Nikki, who jumped off the top but Bayley nailed her with a flying knee. Bayley went to the top herself and hit an elbow drop on Cross… 1-2-3.

Alexa and Nikki comforted each other in the ring as Bayley celebrated. 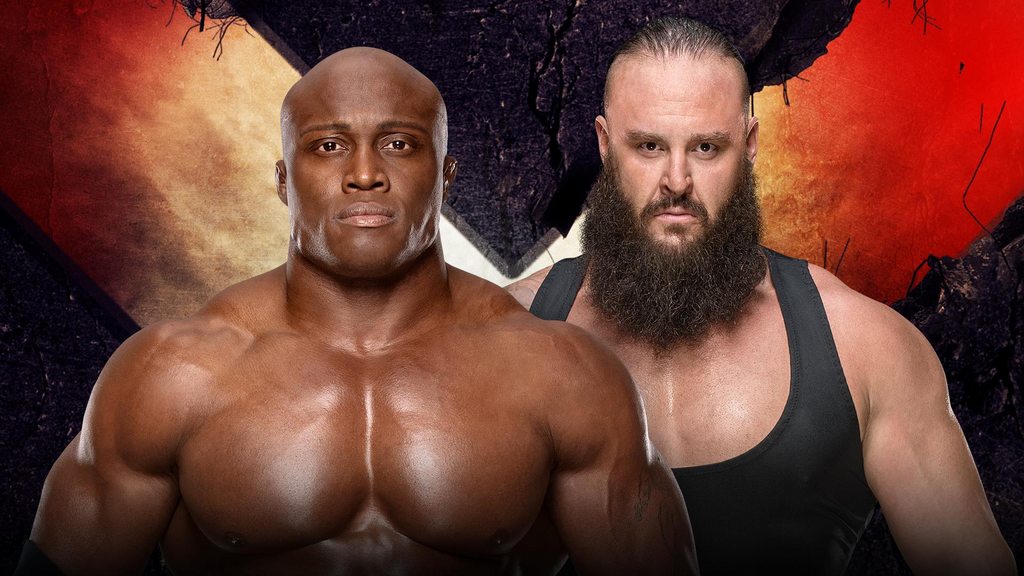 Lashley tackled Strowman through the barricade, back to ringside. He shoulder blocked him over the German announce table, then pushed the table over on top of Strowman. The ref began a 10 count, but Strowman dragged himself out and up at 9. Lashley ran at Strowman again but Strowman lifted him up and tossed him into the international announce table area.

They fought through the crowd again near an elevated section of the seats. Strowman picked Lashley up and powerslammed him into darkness below… The ref started counting to 10… and at 8, Strowman crashed through a portion of the stage, on his feet. The ref counted to 10 and Lashley was out. 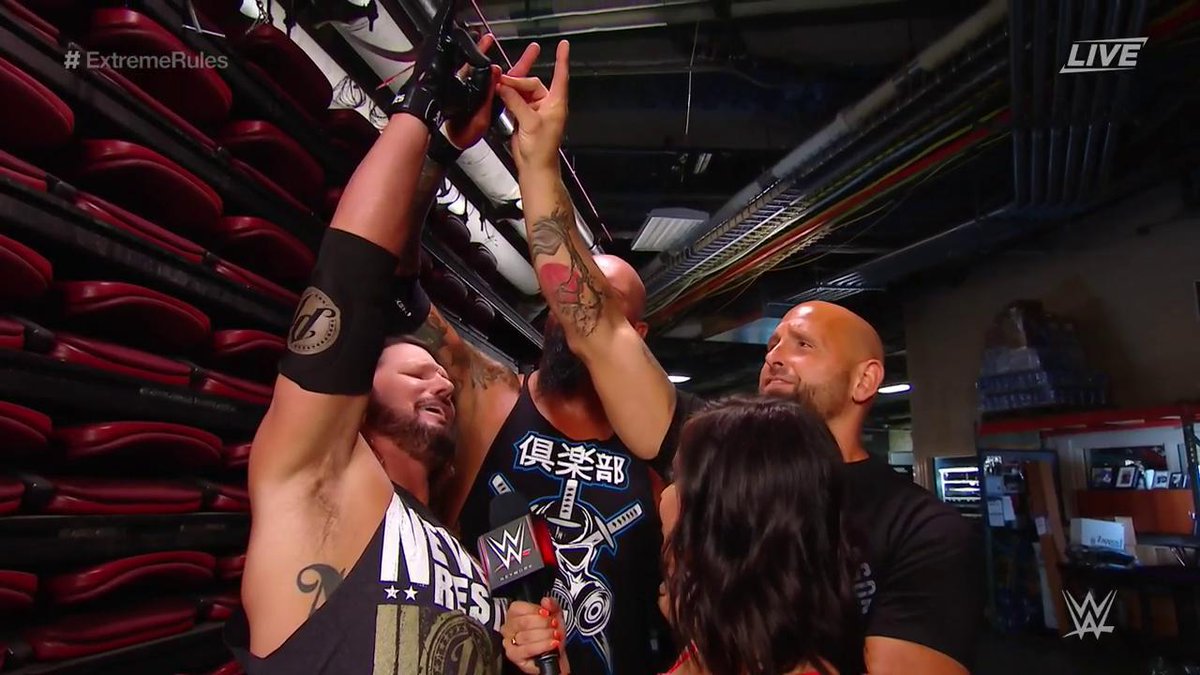 Styles was interviewed backstage, accompanied by Gallows and Anderson. Styles said that he will take Ricochet’s title tonight, and that is too sweet. 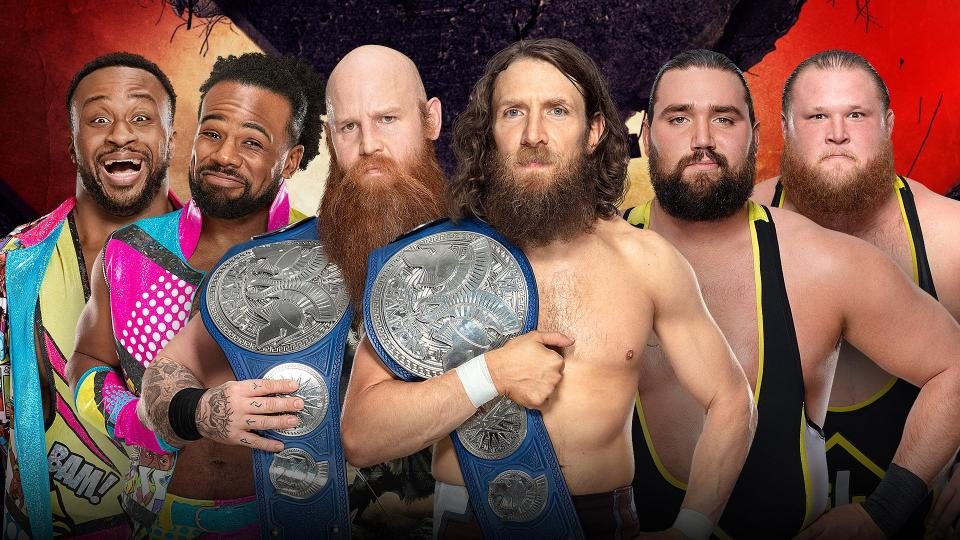 A few minutes in, Otis teased doing a top rope dive onto his four opponents, but stopped, walked out onto the apron, then jumped off instead, getting a big pop.

Heavy Machinery hit the Compactor on Big E, but Woods broke it up. They then hit Woods with a pop up slam.

Rowan tried to do a double claw on Heavy Machinery, but they fought him off and splashed him repeatedly in the corner, then went for a double suplex off the middle rope… but Big E came in and powerbombed Otis and Tucker. Big E then hit a superplex on Rowan, but Daniel Bryan tagged himself in before.

Bryan hit a top rope head butt on Big E, then locked on the LeBell Lock, but Big E reached the ropes. Yes Kicks by Bryan, but Big E got up and told him to hit him again. Bryan slapped him twice, then Big E turned him upside down with a huge clothesline. He tossed Bryan into the corner, but Bryan tried a moonsault, but Big E caught him on his shoulders… Midnight Hour by The New Day… 1-2-3, new champs.

After the match, Kayla Braxton tried to interview the New Day backstage, but Paul Heyman walked up and grabbed the microphone… 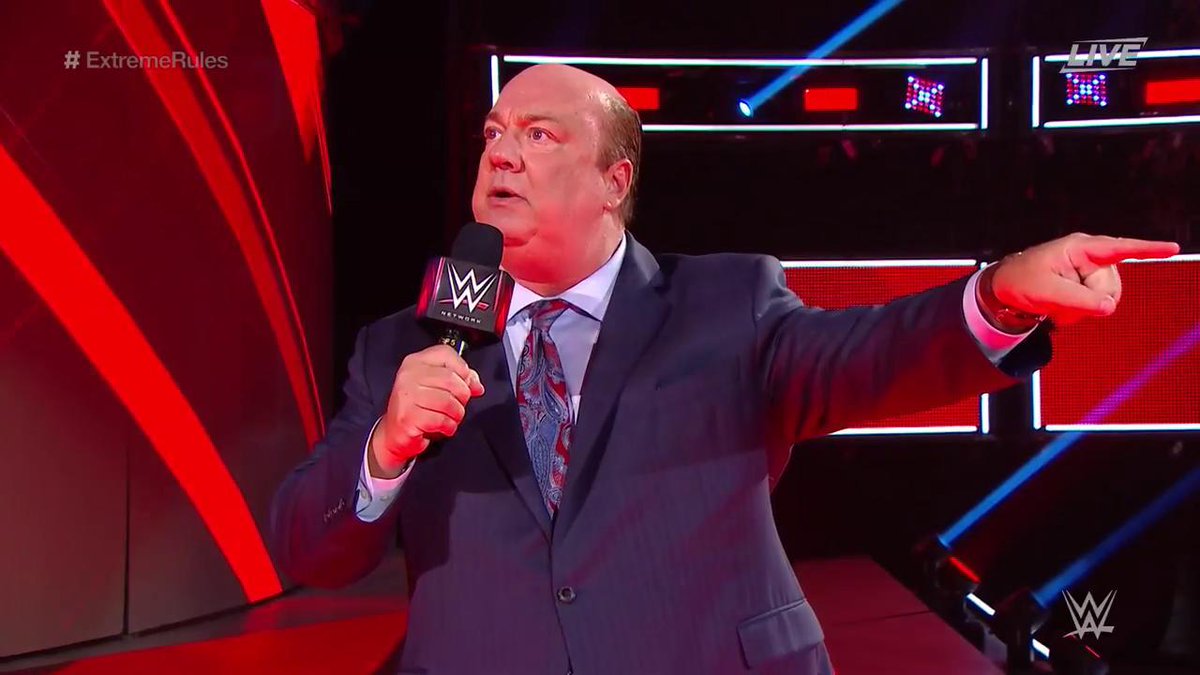 Heyman came out on the stage and said “I am Philadelphia and I am the entire concept of extreme, so I’ll be damned if I leave tonight without being part of history.” He said that tonight, Brock Lesnar will cash in his Money in the Bank contract. But he said that him telling us this would make him a stupid son of a bitch, so you have to ask yourself, “Am I telling the truth or am I Paul Heyman?” 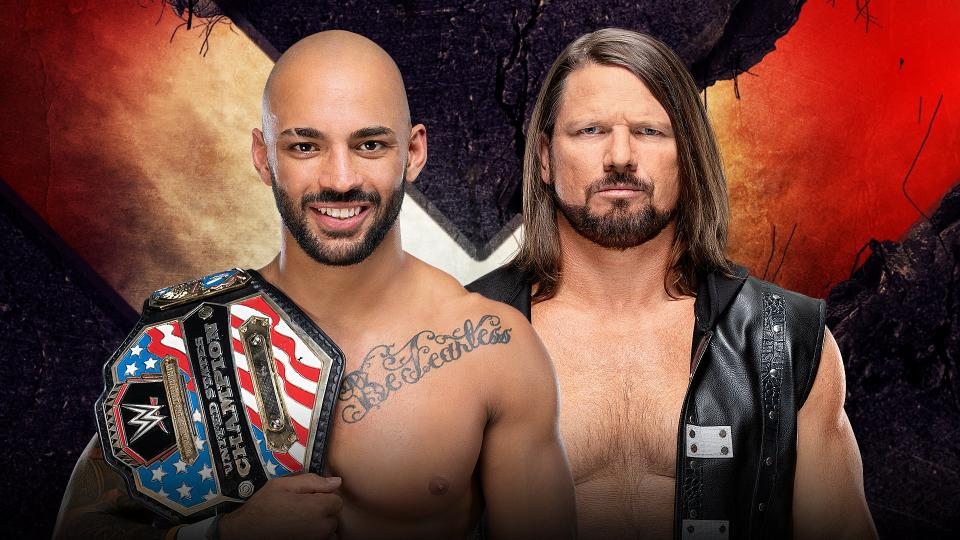 During Ricochet’s entrance, before the bell rang, Gallows and Anderson attacked him. That allowed Styles to control the first few minutes of the match, pounding down on Ricochet. But Ricochet was eventually able to fight back against Styles and dived off the top onto Gallows and Anderson on the outside.

Styles then hit a scary looking Styles Clash off the middle ropes (with Ricochet facing the turnbuckles) for the win. 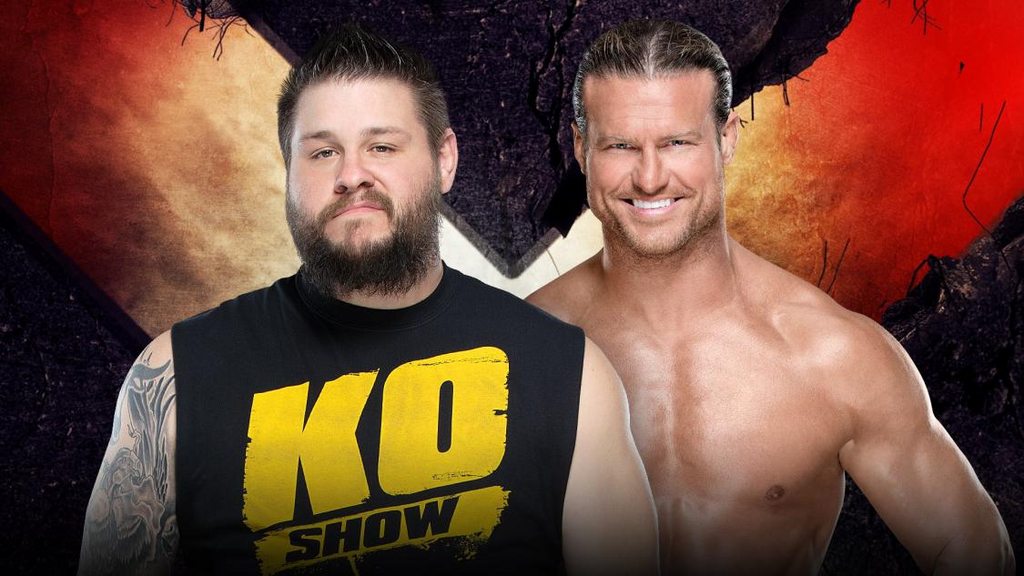 Owens and Ziggler faced off and shouted at each other. Ziggler slapped Owens, then Owens nailed him with a Stunner! 1-2-3 in a few seconds… 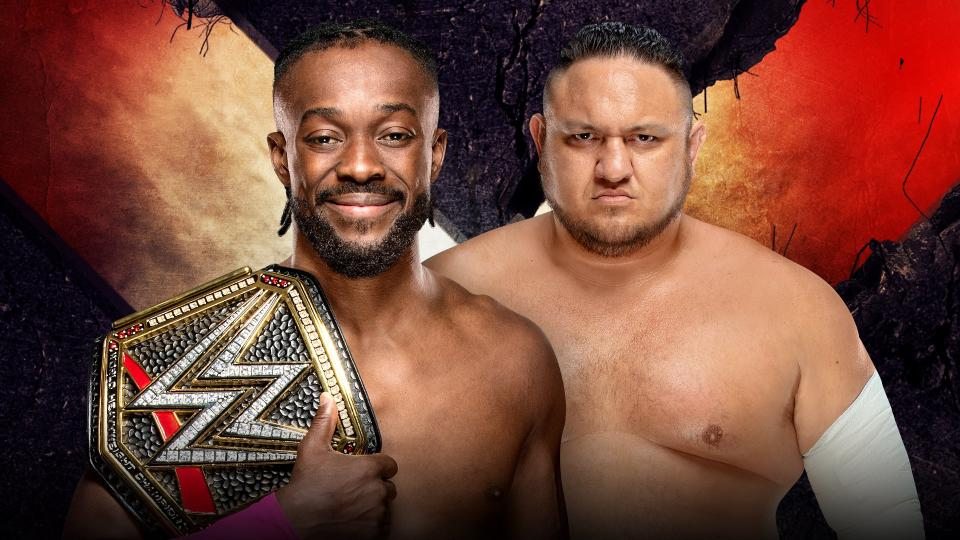 A few minutes in, Joe put Kofi’s fingers between the ring steps and stomped on them. Joe dominated the match for several minutes. He locked on a Coquina Clutch, but Kofi escaped. Joe slammed him down to the mat and hit a senton for a near fall.

Joe set him up for another Coquina Clutch, but Kofi kicked him in the head. Joe ran at Kofi, but Kofi moved, threw him into the ropes then nailed him with Trouble in Paradise for the win… Weird match. Joe dominated about 95% of it. 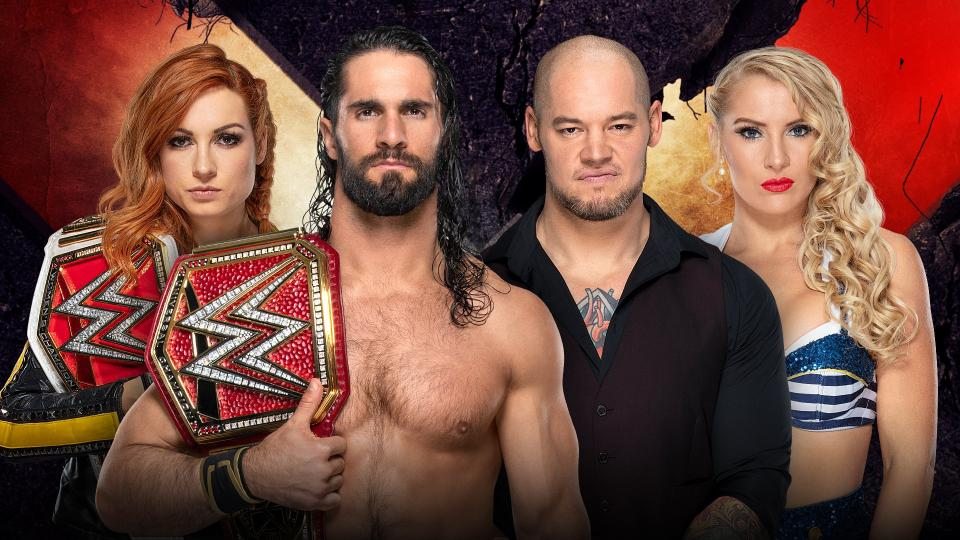 Lacey had “SETH” written on her ring trunks and the camera zoomed in really close on her ass to show it.

Kendo sticks were brought into the match early. Lacey was about to hit Seth with one, but he grabbed her. Lacey seductively touched Seth’s chest and Becky came up from behind and smashed her in the back and head with a kendo stick. Seth and Becky then repeatedly nailed Corbin and Lacey with kendo sticks.

Chairs were then brought out from under the ring, with Becky smashing Lacey in the back a few times. Bexploder on two chairs. Van Daminator by Becky onto Corbin, but Lacey attacked her, then went to the top and hit a sweet springboard moonsault off the top.

Lacey was bleeding from her mouth, with blood on her teeth. She went for the Woman’s Right, but Becky moved and hit her with a DDT.

They tried suplexing Rollins through a table, but Becky got involved and broke it up. Becky set Lacey up on a table on the outside and Rollins set Corbin up on one. Becky jumped off the middle rope and leg dropped Lacey through the table, and Rollins hit a top rope frog splash on Corbin through the other table.

Rollins rolled Corbin in the ring and went for the Stomp, but Corbin picked him up and powerbombed him, then hit Deep Six. He went for the pin, but Becky broke it up.

Lacey ran in, but Becky tossed her out of the ring. Suddenly, Corbin hit Becky Lynch with End of Days! Rollins looked furious and went ballistic on Corbin with a kendo stick, then a steel chair. Stomp by Rollins. And a second Stomp. Lacey looked on and backed up down the aisle… A third Stomp, and it’s over.

Suddenly, Brock Lesnar’s theme music hit! And out he came with Paul Heyman. He entered the ring and hit Rollins with two German suplexes. Heyman gave the Money in the Bank briefcase to the time keeper and Mike Rome announced that he is officially cashing in. The bell rang…

Lesnar and Heyman celebrated the victory as Rollins looked on shocked and deflated. 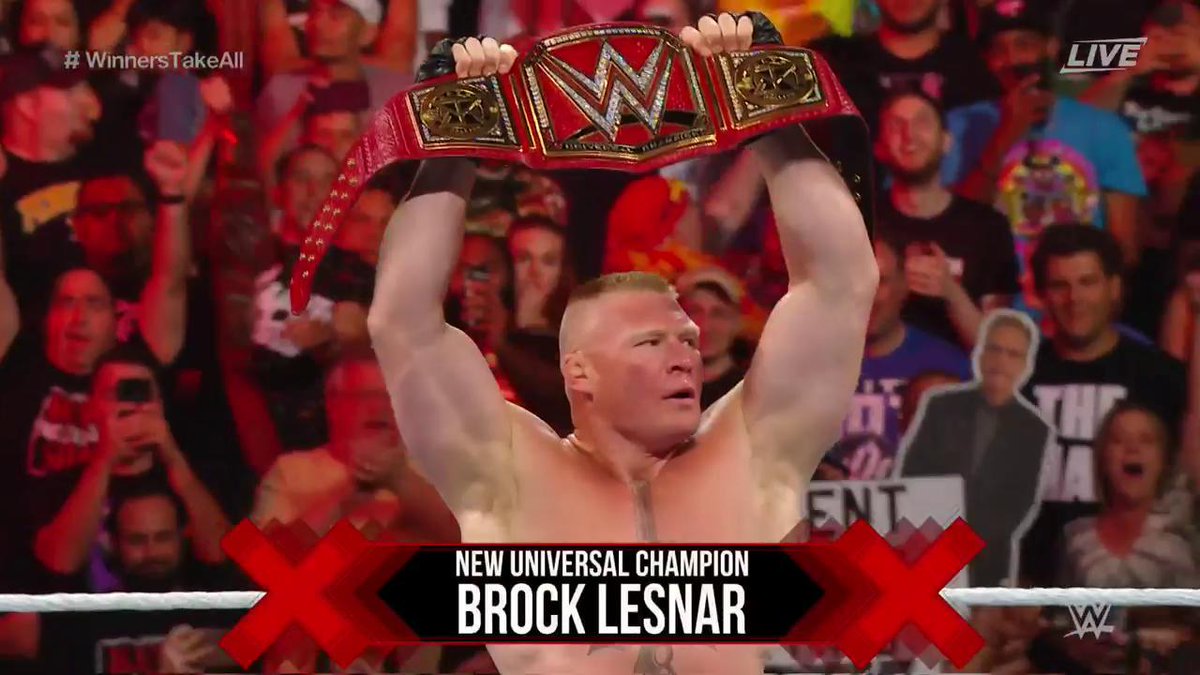