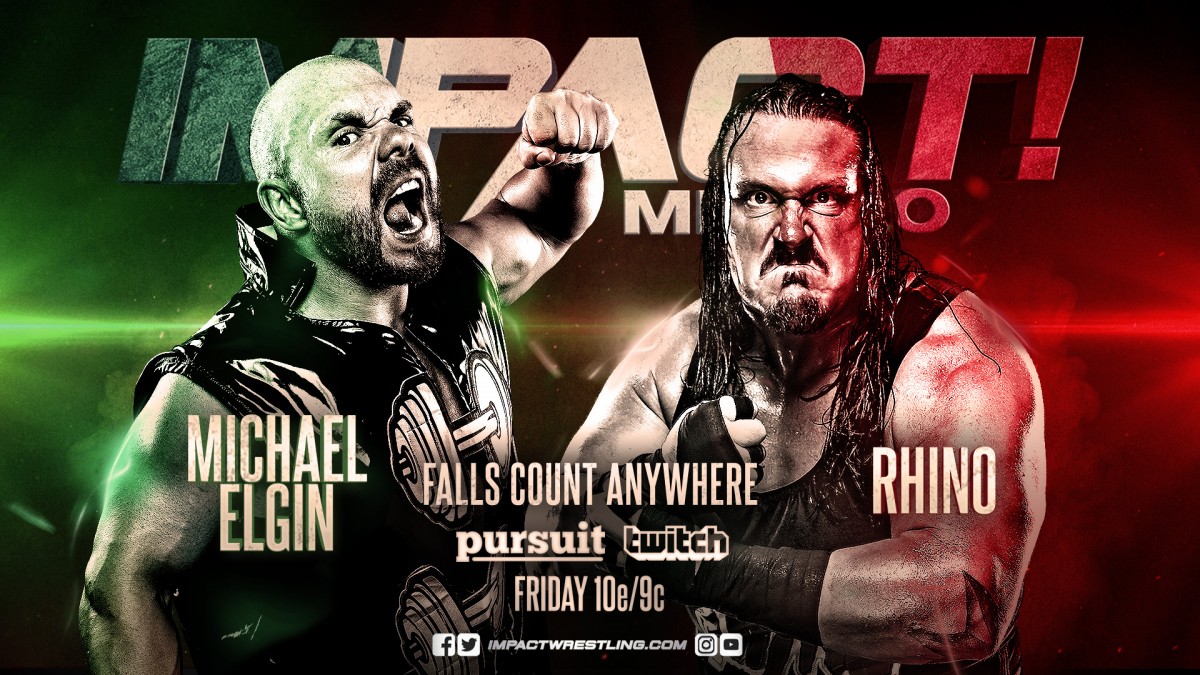 Both teams exchange Hurricanranas in the early going. Willie hits Wentz with a German suplex, followed by a Samoan Drop and standing Moonsault to Dez. Rich jumps off the top and takes out Dez with a modified neckbreaker. Rich takes Dez off the top rope with a Hurricanrana. Willie follows up with the Six-Star Frog Splash to win.

After the match, both teams raise each other’s hands in the middle of the ring.

Ken Shamrock responds to the comments made by Moose on social media. He’s going to confront Moose when IMPACT comes to Las Vegas in September! Backstage, Melissa Santos interviews Moose. He makes it very clear, he’s not afraid of Ken Shamrock. Fallah Bahh interrupts and challenges Moose to a rematch from a few weeks ago.

The Desi Hit Squad continue their punishment as they’re forced to work at the Deaner Farm! Rohit Raju actually seems to be enjoying it.

Sami Callihan sends a message to IMPACT Wrestling management. He wants them to strip an injured Brian Cage of the World Championship and give it to him. They have one week to make a decision or else.

Knockouts Champion Taya Valkyrie is in the ring to name her final challenger before breaking the record. She promised it was going to be big – Big Mami. Taya Valkyrie is dominant in the early stages of the match. Mami turns it around with a Bronco Buster in the corner. Mani attempts a Moonsault but Taya avoids it. Taya follows up with a running knee and locks in a crossface to win.

Taya Valkyrie will now be the longest reigning Knockouts Champion of all time come Monday morning. After the match, Tenille Dashwood makes her IMPACT Wrestling debut and confronts Taya in the ring. Taya insults her, causing Tenille to go on the attack. She takes out Bravo with the Spotlight kick as Taya retreats up the ramp.

This match features talent from IMPACT Wrestling & AAA. Chica connects with a Fisherman’s Suplex on Vanilla. Kiera goes for a superkick but Chica counters and goes for the tag. Madison pulls Jordynne off the apron, preventing her from getting the tag and causing the disqualification.

Kiera, Madison & Vanilla attack Chica and Jordynne. Rosemary comes out to make the save and the match is restarted as a six-woman tag.

Jordynne sends Kiera shoulder first into the steel ring post. Kiera and Jordynne exchange pin attempts. Kiera gets the upper-hand with a Superkick. Chica hits Vanilla with a modified Falcon Arrow. Vanilla connects with a slingshot elbow on Chica. Madison and Kiera abandon Vanilla to fend for herself in the match. Rosemary takes her out for the win.

Ace Austin stages a robbery of Alisha’s purse and looks like a hero when he beats up the thieves and retrieves it for her. Reno Scum are revealed as his partners in crime.

The North confront LAX at the clubhouse. Konnan demands a rematch for the Tag Team Championships now that Santana has recovered from injury. The North agree to the match under one condition – if LAX lose, they must leave IMPACT Wrestling.

Elgin meets Rhino on the ramp and the brawl is on. Elgin sits Rhino down in a chair and jumps off the apron with a clothesline. The fight spills into the crowd as they exchange shots amongst the fans. Rhino attempts a Rhino Driver on the stage but Elgin counters with a clothesline. Rhino connects with a vertical suplex on the ramp. Elgin sends Rhino through a propped-up table in the corner, followed by the Elgin Bomb to win.