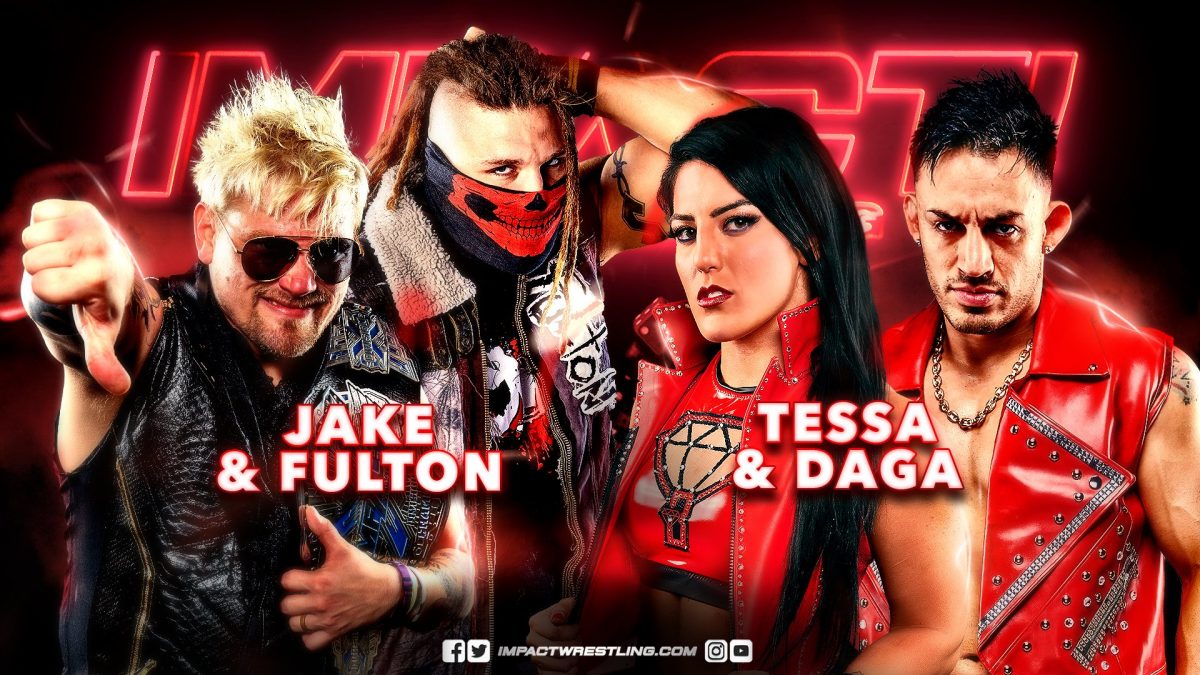 While Ace is making his way to the ring, a female fan leans over the railing and gives him a smooch. They brawl on the outside in the early going, allowing Ace to grab a cup full of ice and throw it in the face of Eddie. Reno Scum comes down to ringside and pulls the referee out of the ring when Eddie has the match won. Eddie takes out Reno Scum with a dive to the floor. Eddie gets Kenny from under the announce table and attacks Reno Scum with it. Ace capitalizes off the distraction, hitting Eddie with The Fold for a near fall. Ace puts a piece of metal in his brace and cracks Eddie over the head to win. Ace Austin is going to Bound for Glory.

After the match, Ace and Reno Scum continue the attack on Eddie.

I think it's safe to say this friendship isn't going anywhere…

Backstage, Taya Valkyrie tries to enlist the help of Rosemary for her Knockouts Championship match against Havok tonight. Rosemary refuses, leaving Taya to fend for herself.

The Desi Hit Squad wear down Trey in the early going. Trey finally turns it around and tags in Dez but the referee doesn’t see it because Rohit is faking an injury. Dez and Wentz attempt dives to the outside but Shera catches them in mid-air. Trey launches himself over the top, crashing into Shera on the floor. Later on, Shera hits Wentz with a vicious powerslam, allowing Raj to score the pin.

Katie Forbes arrives to the arena for her match with Jordynne Grace tonight. Katie tells Jordynne to park her car out front but Jordynne refuses and says she’ll kick her ass instead.

Tenille Dashwood joins Josh Mathews and Don Callis on commentary. Tenille is scheduled to face the Knockouts Champion at Bound for Glory on October 20th. Havok targets the back of Taya with a backbreaker. Taya connects with a double foot stomp off the top. Havok hits a thunderous Chokeslam but Bravo pulls the referee out of the ring and punches him. The referee calls for the bell, awarding the victory but not the title to Havok.

After the match, Havok takes out Bravo with a Chokeslam. Taya takes advantage of the distraction and hits Havok over the head with the Knockouts Title! Tenille gets involved and attacks Taya, sending her retreating up the ramp.

Is this guy still trying to defend what he did to @ThisIsMelSantos?

On the oVe cam, Sami Callihan says they’re going to take care of Tessa Blanchard and Daga while Brian Cage is sitting in a jail cell after attacking a fan last week.

3 teams but only one can leave #BFG with the Tag Team Championships!

Frank Trigg is on commentary to give insight on Moose’s training regimen for his match against Ken Shamrock at Bound for Glory. Moose hits the ropes but Bonnar counters with a roundhouse kick, followed by a belly-to-belly suplex. Bonnar hits a Spinebuster and climbs to the top for an elbow drop. Moose pushes the referee into the ropes, causing Bonnar to lose his footing. The referee calls for the bell.

After the match, Moose is about to attack Bonnar with a steel chair when Shamrock makes the save. Shamrock locks in the ankle lock on Moose, forcing him to tap.

Not so smooth Johnny…

Backstage, Johnny Swinger makes a move on Katie but she turns him down. Grace confronts him and pushes the swing man to the ground.

Daga tells Tessa Blanchard that he can fight his own battles. Tessa says that anything involving oVe is her battle too.

We'll see if @MegaTJP's training is working for @FALLAH1 when he faces @MichaelElgin25 next week!

TJP continues to get Fallah Bahh in shape. Next week, he’s got a chance to prove how far he’s come when he faces Michael Elgin.

Fulton sends Daga back first into the steel ring post, followed by a sick Chokeslam. Daga turns the tide with a cutter and gets the hot tag to Tessa. Daga soars over the top with a corkscrew press. Tessa connects with Magnum off the top and pins the X-Division Champion.

After the match, oVe attacks Tessa and Daga from behind. Sami Callihan joins them in the ring. World Champion Brian Cage arrives but falls victim to oVe’s numbers advantage. They handcuff Cage to the ropes when his wife Melissa tries to stop them. In a sickening act, Sami hits Melissa with a Piledriver in the middle of the ring. IMPACT Wrestling goes off the air.