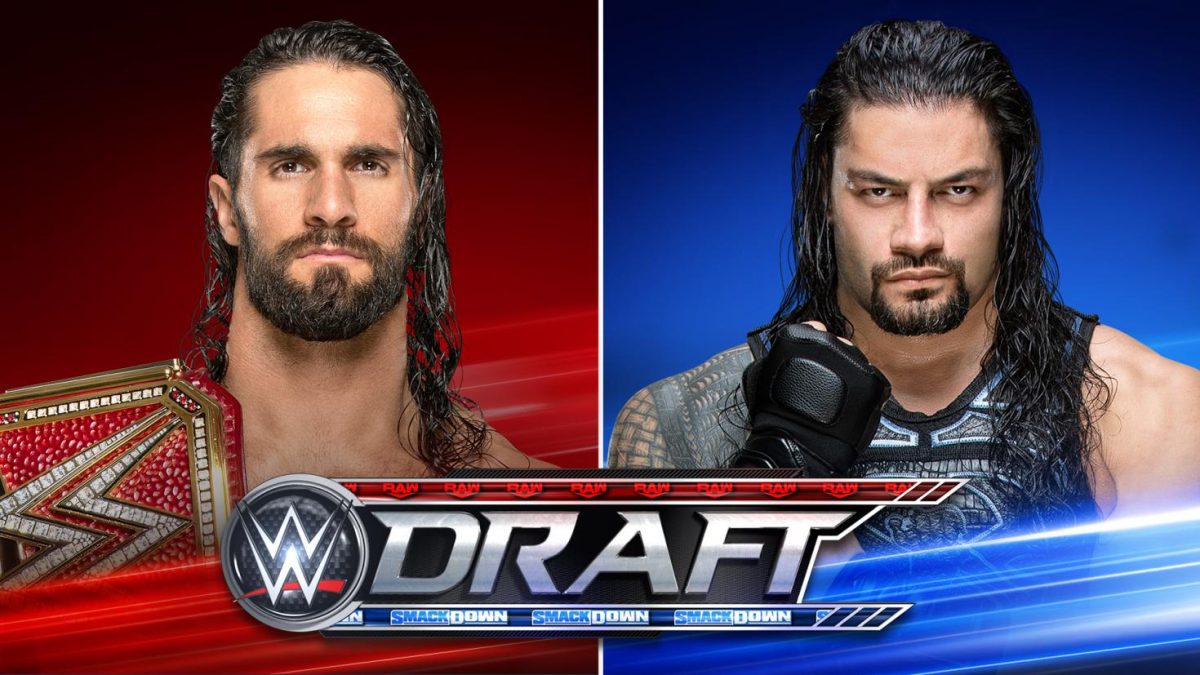 The bell rings and we are under way. A fist pump by both men and the action begins. Rollins to the ropes and a shoulder block by Roman as Seth falls to the mat. Seth back up and a head lock take down by Rollins. Roman reverses it into a cover as Seth kicks out.

Both men lock up and a roll up by Rollins as Roman kicks out. Roman runs towards Seth but Roman is sent to the outside. Seth goes for a suicide dive but Roman with a forearm to the face to stop him. Roman goes for a drive by, Seth out of the way, Seth goes for a flying knee but Roman gets in the ring. Seth gets in the ring and Seth with a right hand. Roman with a right hand of his own. Seth runs to the ropes but a clothesline by Roman who sends Rollins to the outside.

Back from commercial, Seth has Roman in a sleeper hold but Roman starting to get out of it. Roman lifts Seth, goes for a suplex but Seth lands on his feet. He kicks Roman and goes for the Stomp but Roman moves out of the way and lifts Seth up. He lands a powerbomb and goes for the cover but Seth kicks out.

Roman gets ready for the Superman punch but Seth catches him and drops Roman face first into the turnbuckle. A clothesline by Seth sends Roman to the outside. Seth with two suicide dives as he sends Roman back in the ring. Seth on the ring apron, he jumps off the top rope and a knee to the face. Seth climbs the top rope and the frog splash. He goes for the cover but Roman kicks out.

Michael Cole mentions that Raw will get the first draft after Wyatt attacked Seth Rollins, causing a disqualification.

We see inside the Fox Draft War Room as a number of executives are working on their draft. The camera cuts and we see the USA war room.

Stephanie McMahon comes down with a platform setup on stage. She welcomes everyone to the WWE draft. She mentions that executives from Fox and the USA Network will have an influence on the draft. For the first pick of the first round,

They introduced Gable as “Shorty Gable.”

King Baron Corbin comes down to the ring. He says he wants to address everyone as their king. It doesn’t matter if he is drafted to Raw or to SmackDown, he wants them to know what kind of king he will be. He will share all of his riches with everyone. No, not really. He wouldn’t give any of them anything. He will sit in his thrown, up in his castle, as far away from everyone as possible because he can’t stand the smell of filth coming off everyone. All hail king Corbin.

Corbin with a rake to the eyes and a boot to the face by Corbin. He goes for the cover but Gable kicks out. Corbin runs towards Gable but Gable moves out of the way and Corbin rolls to the outside. Gable with a baseball slide. Both men fight on the outside as Corbin catches Gable and chokeslams him onto the announce table.

The panel from Fox’s NFL Sunday talks about the draft.

Stephanie McMahon is at the podium.

Brock Lesnar’s music hits and out comes the new WWE champion with Paul Heyman to the ring. Paul Heyman introduces himself and Brock Lesnar. Heyman says they couldn’t say no to the chance of coming out and enlighten everyone. When a normal human being has a fear and is confronted by that fear, what does a normal human being do? He has nightmares and is scared of his fear when confronted by it. What does Brock Lesnar fear? One thing in life, to relive October 23, 2010 when the butcher of the UFC Cain Velasquez beat, victimized, bloodied and conquered Brock Lesnar. When Cain Velasquez took at will and by force the UFC heavyweight championship away from Brock Lesnar. An unheard of first round TKO at that.

Heyman says you can roll the clip back in a few weeks and you’ll understand that Heyman did not give a prediction. That was and as he’s talking, Rey Mysterio’s music hits and out comes Rey with Cain Velasquez. Mysterio says not so fast, he must have forgotten some footage from Cain. We see images of UFC 121 when Cain defeat Brock Lesnar. Cain says he will beat him again and give him another scar on the other side of his face. Brock Lesnar looks angry in the ring as Paul Heyman stops him.

The New Day are on stage with two pink WWE titles on a podium. We see a clip of two sister cancer survivors talking about how they really wanted to see The New Day one day. They went to a show and went backstage to speak with them. Back in the arena, Kofi says they promote the power of positivity and they are so proud to support the fight against breast cancer. They introduce and welcome both sisters to the stage.

Samantha and Sarah Veilleux come out and Xavier Woods that they have created the Champions for Hope contest which both women won. A year and a half ago, Sara with Samantha by her side, was able to defeat breast cancer. And The New Day had a chance to meet them a few years ago and they got to see their ups and downs. Their highs and lows and they want to say they are two of the strongest people they have ever met.

Woods says they are insanely proud of the both of them. They present both women with two pink WWE women’s championships. Woods says if they’ll excuse them, they have to put a hurting on The OC. They ask why as Big E says because and the fans chant New Day rocks.

Six Man Tag Match
The New Day vs. The OC

Luke Gallows with a big boot onto Xavier Woods. With the referee distracted, Karl Anderson throws Woods into the steel steps.

Back in the ring, AJ goes for the phenomenal forearm but Kofi moves out of the way. Kofi goes for SOS, AJ reverses it into the Styles Clash but Kofi lands on his feet. A dropkick by Kofi, he runs towards AJ but AJ with a roll up cover. Kofi kicks out, both men back up and Kofi with the Trouble in Paradise. He goes for the cover and gets the pin.

Stephanie McMahon is back on stage.

The Revival: Drafted to SmackDown

Stephanie McMahon says that this is the final round tonight.

Bayley comes out and once on stage, her music stops. She takes off her jacket and looks at the crowd. She walks back and grabs a sticck with a sharp edge. She starts hitting and destroying the inflatable Bayley buddies. She throws the stick away and walks down to the ring. She gets in the ring as the bell rings.

Both women exchange fists. A neckbreaker by Charlotte and Bayley goes to the outside. Charlotte follows her and throws Bayley in the security rail. She grabs Bayley and throws her over the barricade into the WWE universe. Charlotte grabs Bayley but a right hand by Bayley as she drops Charlotte onto the mat outside. She slams Charlotte’s head into the ring steps. Bayley gets back in the ring.

Bayley with a back suplex. Charlotte is in the corner and Bayley hits her with a knee to the face. Bayley climbs the top rope and the elbow drop. She goes for the cover but Charlotte kicks out. Bayley throws a tantrum in the ring and Charlotte hits her with the Natural Selection. Charlotte grabs the legs but Bayley reverses it into a cover and gets the pin.

After the match, Bayley says “Bitches, screw all of you” as she drops the microphone.