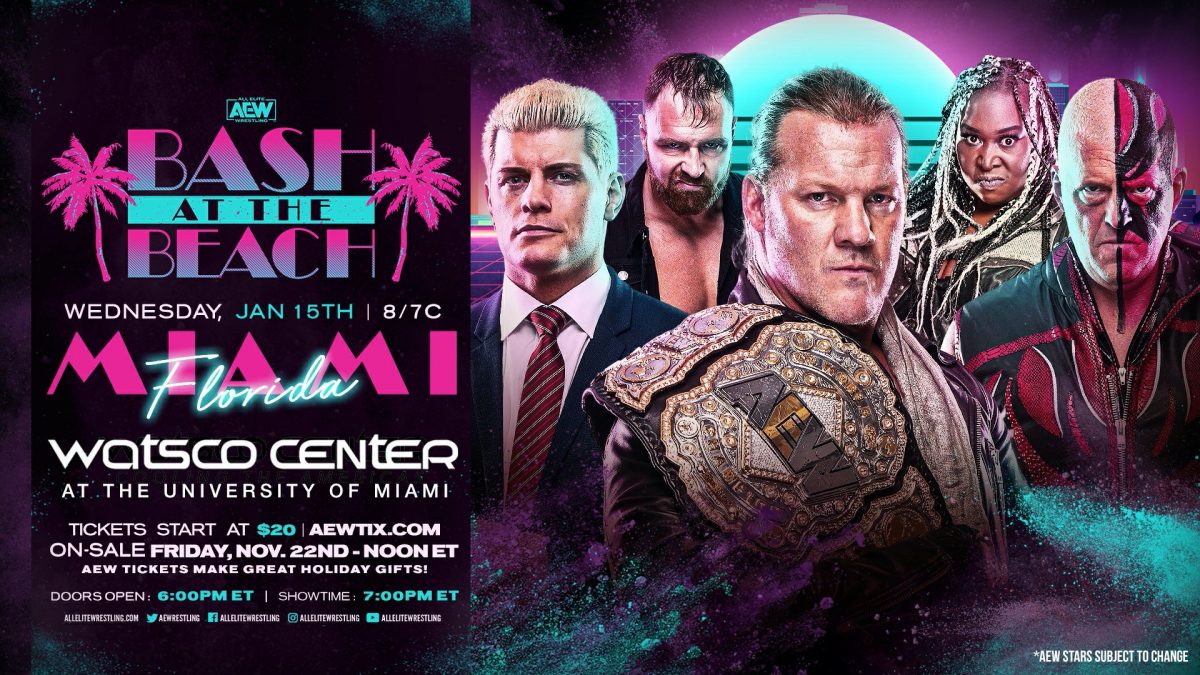 AEW announced that two episodes of Dynamite in January will be “Bash at the Beach”-themed, with one episode taking place on Chris Jericho’s Rock ‘N’ Wrestling Rager at Sea cruise.

The January 15 episode of Dynamite will be named “Bash at the Beach” and will take place in Miami, FL at the Watsco Center, which is an indoor arena.

The January 22 episode will take place on Chris Jericho’s cruise, which is sailing from Miami to Nassau, Bahamas and back from January 20-24. It’s not clear if the episode will be live or taped.

Cody Rhodes registered to trademark “Bash at the Beach” in March of 2019.

The #AEWDynamite scheduled for Wednesday, January 15th in Miami, Florida has gotten just a little bit bigger now as the event will be Officially Titled: BASH AT THE BEACH

The adventure begins on Wednesday, Jan. 15, when AEW Dynamite takes over the Watsco Center at the University of Miami for a Bash at the Beach themed episode, and continues with Chris Jericho’s Rock ‘N’ Wrestling Rager at Sea, sailing round-trip from Miami to Nassau, Bahamas, on Jan. 20-24.

High-octane bouts with the biggest names from AEW will be filmed from Jericho’s sold-out Norwegian Pearl ship, including the Jan. 22 episode of Dynamite on TNT. The history-making event will be bubbling with exclusive opportunities to meet AEW’s star-studded roster, as well as non-stop wrestling, rock ‘n’ roll, live podcasts, paranormal explorations, talent-hosted activities, autograph sessions, parties and more.

“AEW’s Bash at the Beach events will deliver nine unforgettable days of wrestling and much more from the hottest company in the business today,” said Chris Jericho. “Thousands of the Friends Of Jericho onboard the SOLD OUT ‘Rock N Wrestling Rager At Sea’ will have the experience of their lives, and now millions more will be able to watch AEW Dynamite along with us, as we break out the bubbly together from Miami to the Bahamas.”

Tickets for the Jan. 15 Bash at the Beach show in Miami go on sale this Friday, Nov. 22, at noon ET. Tickets for the show will be available for purchase exclusively at www.AEWTIX.com. For your chance to join the party at sea, sign up for the waitlist at www.chrisjerichocruise.com.