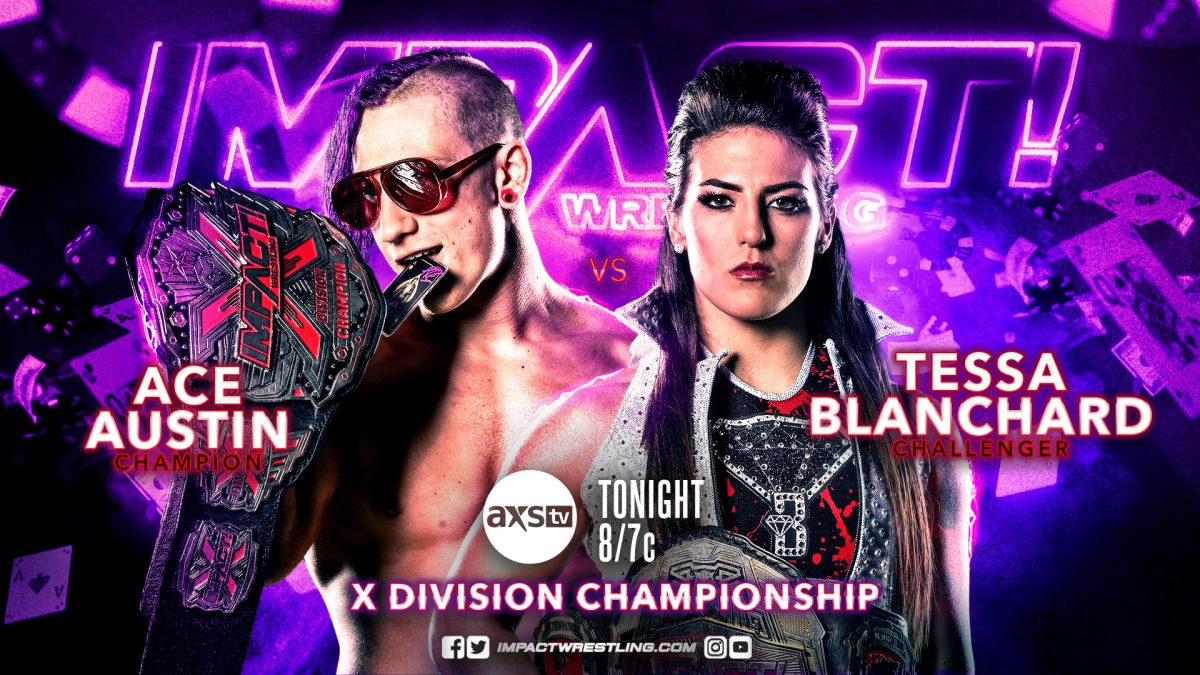 Daga hits a slingshot crossbody to the outside. RVD sends Daga into the apron, followed by a powerslam on the floor to gain control. RVD hangs up Daga on the ropes, then connects with a kick off the top rope. Katie is furious at ringside as people continue to say rude things to her on the internet. RVD tries to persuade her not to care what they say. Katie heads to the back. RVD attempts the monkey flip but Daga cuts him off with a dropkick. RVD leaves to go find Katie, getting counted out in the process.

Winner: Daga (via count out)

RVD finds Katie in the back. Katie says the fans don’t deserve to see them if they are going to talk trash on social media. Joey Ryan interrupts and says he too is the target of criticism on social media because of his super penis. Joey says that Katie has the super ass and RVD is a super star. Joey suggests this could potentially bring them together.

Gabby Loren interviews Knockouts Champion Jordynne Grace. She reflects on her victory over Havok at Sacrifice this past weekend. Jordynne lays out an open challenge, saying she will take on anyone. Madison Rayne confronts her and says the open challenge is her thing. Madison ensures that she won’t be the one to challenge Jordynne but she will find someone suitable by the end of the night.

Rohit Raju explains why he cost the Rascalz the Tag Team Championships at Sacrifice. He says they have had shot after shot and now, it is time for him and Shera to get an opportunity.

.@HakimZane is FED UP with The Rascalz getting title shots that he feels The Desi Hit Squad deserves. #IMPACTonAXSTV pic.twitter.com/yW06AG3uOr

Wentz gains momentum with a release German suplex. Rohit hits a running knee to turn things around. Shera is about to attack Wentz on the outside when his fellow Rascalz come to his aid. Rohit attempts at dive but Wentz cuts him off and hangs him up on the middle rope. Wentz connects with a modified face plant for two. Shera distracts Wentz from ringside, allowing Rohit to hit the Flatliner for a near fall. Shera get on the apron but the Rascalz pull him down to the floor. Rohit avoids a Swanton and hits his signature double foot stomp to win.

There’s another mysterious interruption from the ICU.

We'd like to apologize for these repeated interruptions on IMPACT. #IMPACTonAXSTV pic.twitter.com/MJecYZea4L

Ace Austin previews his X-Division Title defense against Tessa Blanchard tonight. Ace doesn’t think he should have to defend against Tessa, despite losing to her in a non-title match at Sacrifice. Ace say when he defeats Tessa tonight, he will be next in line for a shot at the World Title.

On the oVe cam, Dave Crist says that Sami Callihan is not coming back. Dave says they may need a new leader.

Alize hits a tilt-a-whirl head scissors, followed by a Hurricanrana to take control in the early going. Grace begins to build momentum with a snap suplex, followed by running strikes in the corner. Grace attempts the Grace Driver but Alize fights out of it. Alize connects with a cutter for two. Grace counters a swinging neckbreaker into the Grace Driver to win.

Backstage, Gabby Loren announces that The North will face TJP and Fallah Bahh in a non-title match next week on IMPACT! Ethan Page says that teams around the world are trying to fit the mold of The North due to their success. Josh Alexander notes that they are soon to be the longest-reigning Tag Team Champions in IMPACT Wrestling history.

"Tread lightly – follow in our footsteps long enough and you're going to run into us."@Walking_Weapon and @OfficialEGO seem to see a lot of themselves in @MegaTJP and @FALLAH1. #IMPACTonAXSTV pic.twitter.com/FuBIQcTEOx

Rosemary sneaks up on Havok who is clearly on edge after the re emergence of Su Yung. Rosemary informs Havok that next week, she will face Su in a No Disqualifications Match.

Eddie hits an overhead belly-to-belly suplex. Elgin delivers a strong forearm shot, knocking Eddie down to the mat. Eddie hits a thunderous Superplex from the top rope. Elgin hits a superkick, followed by a German suplex. Eddie comes right back with a German suplex of his own. Eddie connects with a sit-down Tiger Bomb. Elgin avoids a Moonsault attempt, allowing Elgin to capitalize with a discus clothesline. Eddie gets Elgin in a pinning predicament to score the pin and the win.

Gaby Loren interviews former Team Canada members Scott D’amore and Petey Williams. They speak on TNA: There’s No Place Like Home on April 3. Moose interrupts and reminds them that TNA is dead. Petey says that Moose wouldn’t be able to call himself Mr. IMPACT Wrestling without TNA. Petey calls out Moose for never being a champion. These two will face off one-on-one next week.

"The difference between all of those guys you mentioned and you is we were all actually champions."

Glenn Gilbertti interrupts a conversation between Willie Mack and Johnny Swinger. Willie still wants no part of forming a tag team Swinger. Gilbertti forms a bond with Swinger and they decide to form a tag team together.

The Mack and Pack Connection has died so the New York Connection can live again. #IMPACTonAXSTV @TheRealDisco @Willie_Mack pic.twitter.com/z5vxEw7KxK

Scott D’amore and John E Bravo host the return of Gut Check as the search for the next IMPACT Wrestling star begins.

Tessa is on fire in the early going. Tessa hits a Magnum out of the corner for a two count. Ace gains control with a vicious backbreaker. Ace begins to wear down Tessa with a series of moves. Tessa attempts the Buzzsaw but Ace overpowers her into a counter. Ace goes for The Fold but this time it’s Tessa who counters into a tornado DDT. Out of nowhere, Taya Valkyrie attacks Tessa to cause the disqualification.

Taya pummels Tessa and leaves her laying in the middle of the ring as IMPACT! goes off the air.