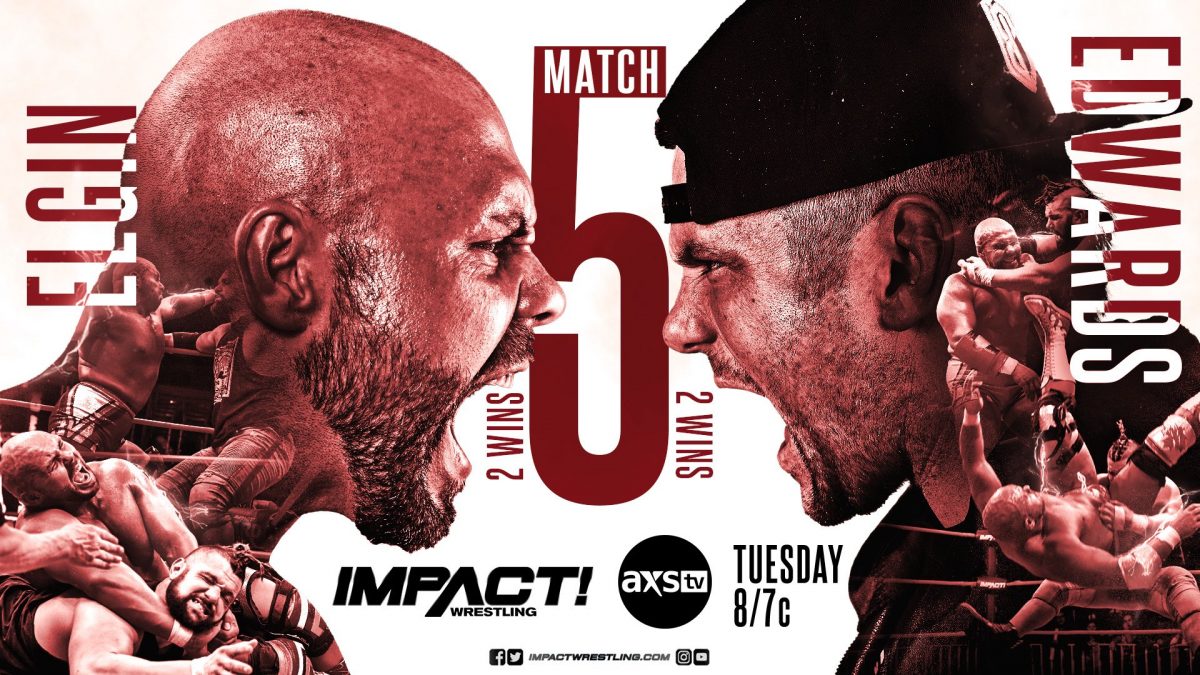 Before the match begins, the referee ejects the Crist brothers from ringside. Fulton chokes Rhino with his boot in the corner. Rhino tries to build momentum with a series of chops but Fulton shuts him down with a back elbow. Fulton charges but Rhino sidesteps, sending Fulton crashing into the turnbuckle. Fulton counters the Gore into a big boot for two. Rhino connects with the Gore to win.

After the match, oVe returns to ringside to attack Rhino. The lights go out and Sabu makes the save. Super Genie tosses him a chair and Sabu drives Fulton head first into it with a DDT.

Gabby Loren interviews World Champion Tessa Blanchard after she retained the World Title over Taya Valkyrie last week. Tonight, she will find out who her challenger will be at Rebellion when Eddie Edwards and Michael Elgin clash in the finale of their Best of 5 Series.

Security has surrounded the IMPACT Wrestling production truck after a series of interruptions from the ICU.

Dez hits a top rope Moonsault on Rohit. Shera and Rohit double team Dez and begin to wear him down. Dez makes the tag to Wentz as he goes on the attack with a flurry of fast-paced offense. Shera puts a halt to their momentum by driving them both to the mat. Shera hits Dez with a Chokeslam, followed by a running knee from Rohit for a near fall. The Rascalz get Shera off his feet with double superkicks. Wentz hits Shera with a Swanton, Dez connects with a corkscrew and the Rascalz score the win.

Katie Forbes makes a hard decision to toss her old attire in the trash. The Deaners let her know that they liked the way she looked in it. Joey Ryan accuses them of objectifying her and challenges them to a match.

Madison Rayne has handpicked Jordynne’s open challenge opponent for tonight. Lacey hits a powerful shoulder tackle in the early going. Jordynne sends Lacey flying off the top to the mat below. Lacey connects with a slingshot elbow for two. Jordynne hits running double knees in the corner, followed by her signature splash. Jordynne connects with the Muscle Buster but Lacey somehow kicks out before the count of three. Lacey soars with a Frog Splash from the top rope for yet another near fall. Jordynne puts Lacey away with the Grace Driver.

Gabby Loren interviews TNA veteran Chris Sabin who announces he will be special referee in the King of the Mountain World Title Match at TNA: There’s No Place Like Home. Moose interrupts and says he will be competing in the match but has a tough time grasping the rules.

Taya Valkyrie mourns her loss to Tessa Blanchard for the World Title last week. Rosemary is also at the bar as she remembers her friend, the bunny. They bond over both having lost everything that was important to them.

Do I have your attention now?

This is my company now.

The referee confiscates Swinger’s brass knuckles before he can use them in the match. Mack quickly falls victim to the numbers game. Swinger distracts the referee, allowing Gilbertti to use a roll of quarters as a weapon.

In a shocking turn of events, X-Division Champion Ace Austin gets up on the apron to even the odds for Mack. Ace gets the tag and goes on the attack. Willie hits Gilbertti with the Samoan Drop, followed by a standing Moonsault. Ace takes out Gilbertti with The Fold. Willie connects with the Six Star Frog Splash to win.

Su Yung attacks Havok in the backstage area as their war continues. Su successfully places her inside the coffin after choking her out.

Glenn Gilbertti and Johnny Swinger get into an argument after their loss to Willie Mack and Ace Austin. Gilbertti quits before storming off.

Gut Check Week 3 commences as Scott D’Amore and John E Bravo continue their search for the next IMPACT Wrestling star.

The winner of this match will advance to Rebellion to challenge Tessa Blanchard for the World Championship. Both men exchange strong shots in the middle of the ring. Eddie gains the upper-hand with a snap belly-to-belly suplex. Elgin is perched on the top but Eddie sends him crashing to the mat with another suplex. Eddie connects with the Backpack Stunner for two. Elgin hits a thunderous top rope Dragon Suplex for a near fall. After numerous attempts at the move, Eddie almost puts Elgin away with the Tiger Driver. Elgin connects with a vicious Lariat. Elgin is in shock after Eddie kicks out of a spinning Elgin Bomb. Elgin inadvertently takes out the referee with a clothesline. Eddie hits the Boston Knee Party but after a second referee comes out to count, Elgin kicks out at two. Elgin locks in a submission while Eddie gets him in a pinning predicament. At the exact same time, Eddie scores the pin while Elgin forces him to tap out.

After the match, World Champion Tessa Blanchard comes out and says she will defend the World Championship against both men at Rebellion. IMPACT! goes off the air.