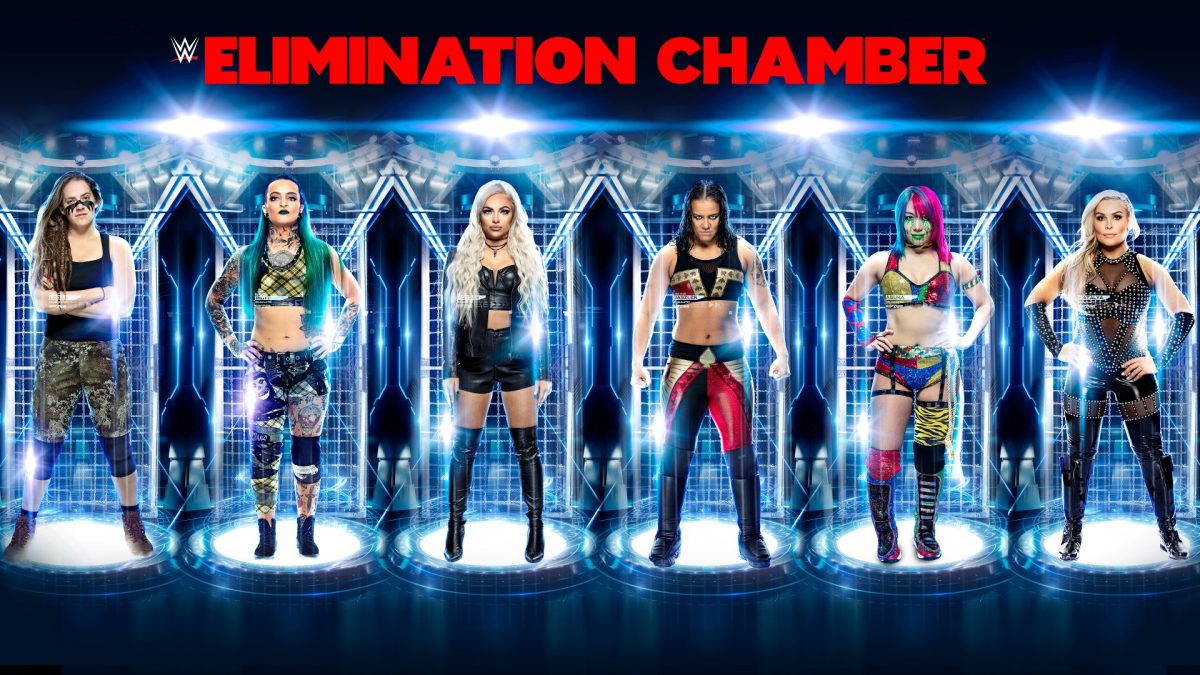 This was what you’d expect it to be. Standard short Kickoff tag match, with the Viking Raiders controlling most of it. In the end, they hit Zack Ryder with the Viking Experience for the win. 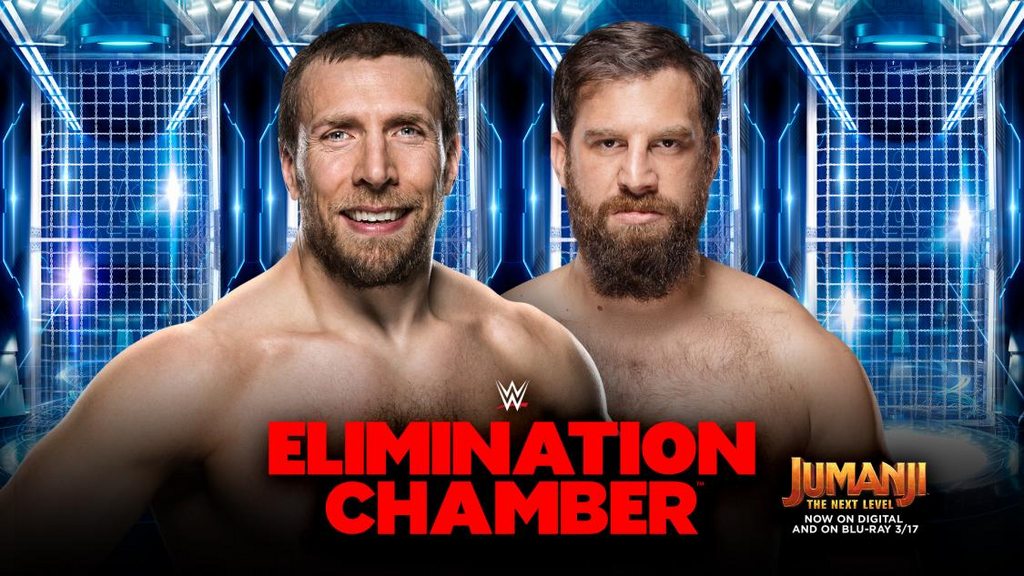 This match had a slow pace early on, with both men trading holds and basically being evenly matched.

Towards the end, Gulak hit a brutal release German suplex, with Bryan landing terribly on the back of his head and neck. Bryan rolled to the outside, but was able to get in at the count of 9.

Gulak hit a top rope inverted superplex, then locked on the Gu-Lock (Dragon Sleeper), but Bryan reversed into a Yes Lock and Gulak “passed out.”

Bryan’s back was very bruised and red. Bryan pointed at Gulak in a show of respect after the match, then led a “Yes” chant. Good match to start the show.

Backstage, Roode said that there’s no doubt that he and Ziggler will be the tag champs after tonight and when that happens, it’s going to be absolutely glorious. There was a “glitch” on the TV in the background. Dolph Ziggler gave a special shout out to Mandy Rose and said he’s going to dedicate their victory to her. 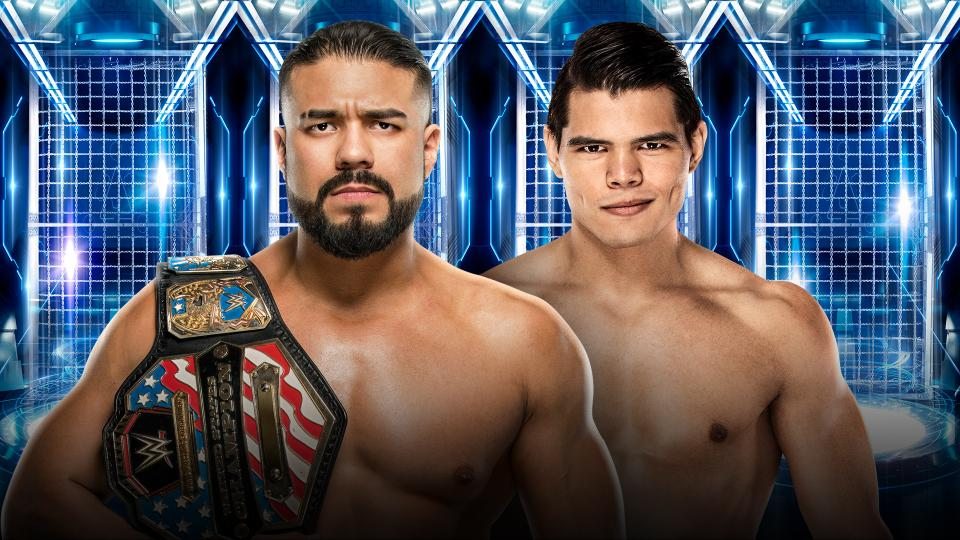 As soon as the bell rang, Andrade ran and nailed Carrillo with a spinning back elbow, but Carrillo kicked out.

A few minutes in, Carrillo hit a nice springboard hurricanrana off the top rope, but Andrade kicked out. Carrillo went to the top for a moonsault, but Andrade moved, but Carrillo was able to land on his feet. Andrade tossed him into the corner and hit him with the running double knees.

On the outside, Zelina Vega pulled off the protective padding, exposing the hard floor. Andrade looked like he was going for a Pedigree, but Carrillo back body dropped him, then flipped from the ring to the outside onto Andrade.

In the ring, they exchanged pins in a quick sequence, with Andrade eventually rolling through and grabbing a handful of tights for the pinfall.

Pretty good match. Would have been better if I didn’t feel like I’ve seen it like 8 times in the past 2 months.

AJ Styles said that he feels sorry for Aleister Black because he has no friends and sits around in a room listening to dark music. AJ said that Gallows and Anderson will be in his corner. 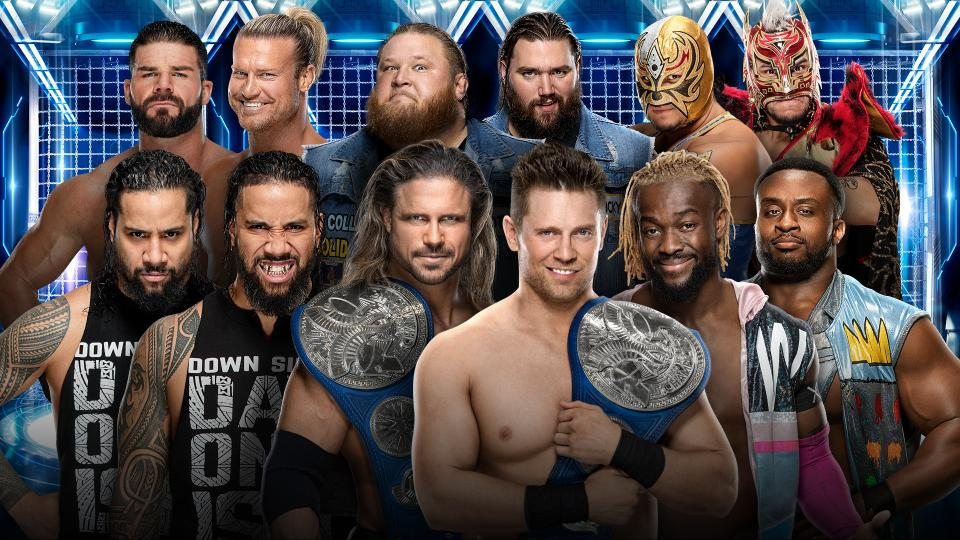 The New Day and The Usos started things off. Not much happened.

Lucha House Party entered and the pace picked up big time. LHP hit a flurry of offense, but the Usos eventually took control. LHP climbed to the top of a pod and Metalik dived off onto the Usos, and Dorado flipped off into the ring onto the Usos.

The Miz & John Morrison entered next and took control of the match. The crowd was almost silent. Pretty boring so far other than Lucha House Party. Metalik went to the top of the pod again, Morrison climbed to the top rope, and Metalik hit him with a sweet hurricanrana off of the top of the pod. Nice.

Heavy Machinery entered next and bulldozed over everyone. Everyone started fighting in the ring. Meanwhile, Lince Dorado climbed to the top of the inside of the cage, then started swinging with his arms and did a shooting star press onto everyone! Holy shit.

Robert Roode & Dolph Ziggler entered next. Miz & Morrison teamed up with them to attack Heavy Machinery. Dolph climbed on top of a pod to escape Otis, but Tucker climbed up after him, then tossed him down to Otis, who caught him and slammed him down. Tucker then flipped off of the pod onto everyone else below.

Otis ran at Ziggler towards the pod, but Ziggler moved and Otis crashed through the pod wall to the outside of the chamber to the floor! Medical officials and refs checked on Otis as Tucker looked on concerned. Tucker angrily ran at both Ziggler and Roode, but they got the best of him and Roode hit him with a Glorious DDT, eliminating Heavy Machinery. Heavy Machinery was eliminated by Ziggler & Roode.

Kofi dived off of the pod onto one of the Usos, but he moved and Kofi crashed down to the mat. Miz & Morrison both pinned him at the same time, eliminating the New Day. The New Day was eliminated by Miz & Morrison.

Miz & Morrison and The Usos were the last two teams. Skull Crushing Finale by The Miz on Jimmy Uso, but he kicked out. Miz locked on a figure four and Morrison hit the Starship Pain on Jimmy, but Jey broke up the pin. Miz suddenly rolled up Jey Uso near the ropes and Morrison flipped over to also pin him. Miz put his feet on the ropes and they picked up the win with the double pin.

Good match, with the highlights by far being Heavy Machinery and Lucha House Party. 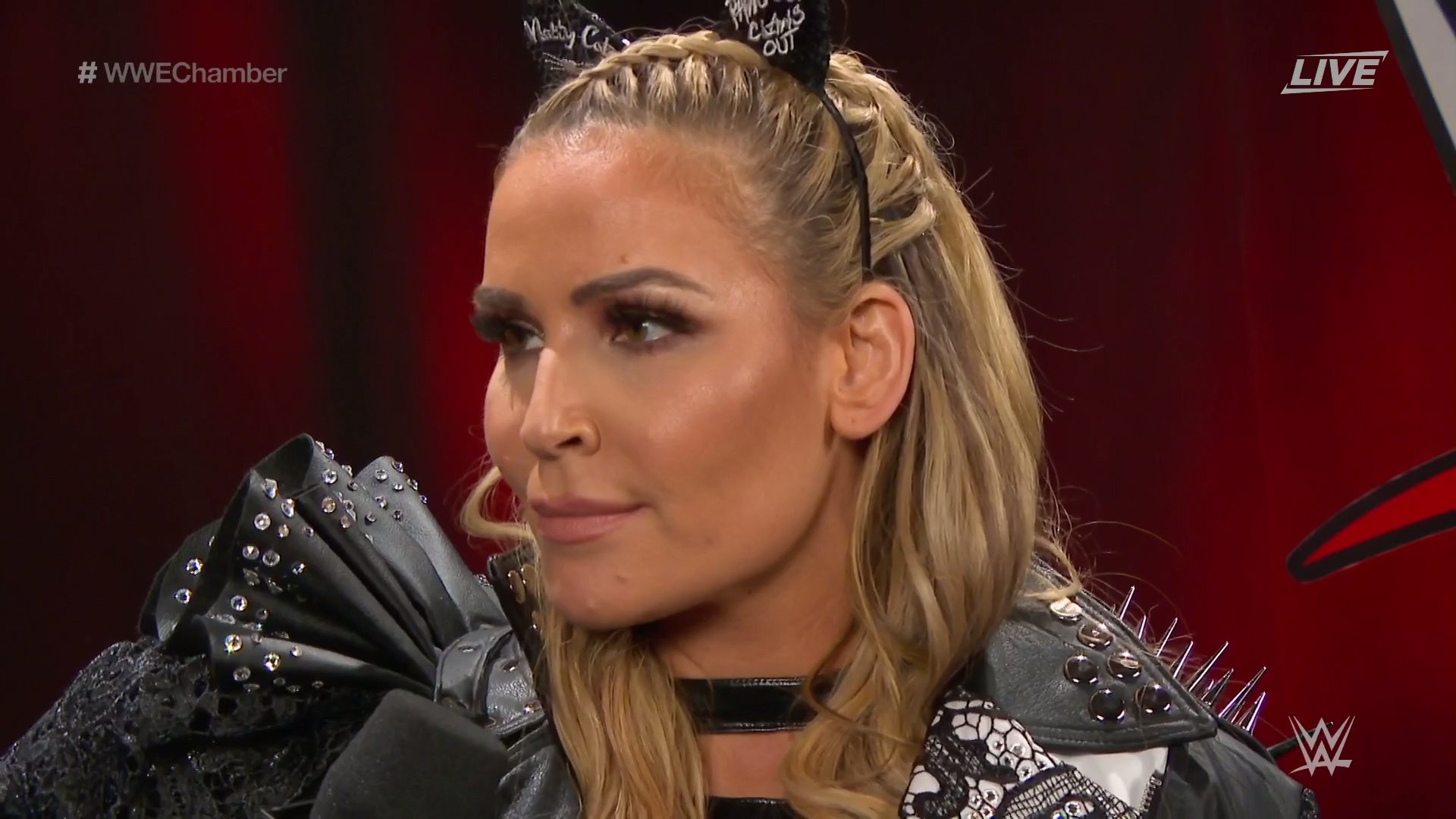 Natalya was asked how her friend Beth Phoenix was doing. She said that Beth is going to “pull through” and be OK, but she can’t say the same for Randy Orton when Edge gets his hands on him. 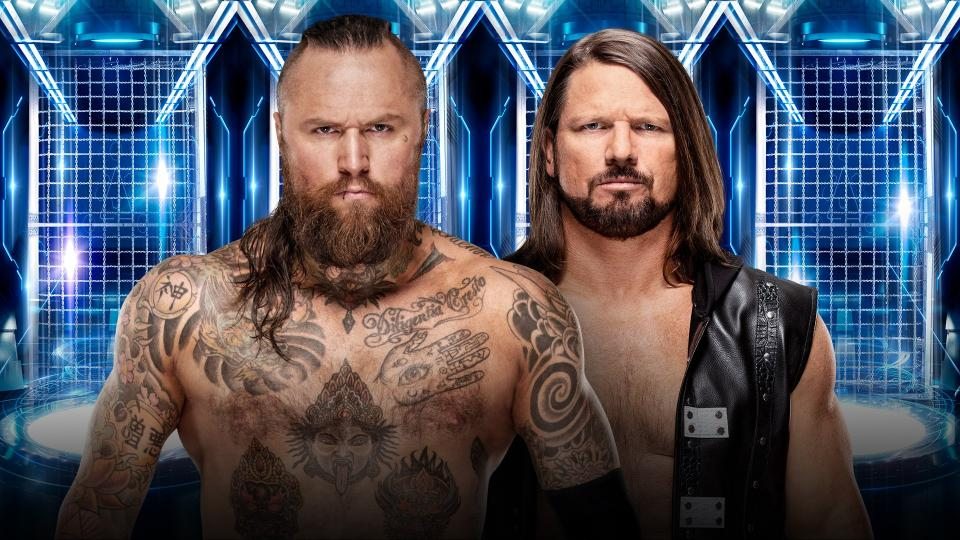 Styles worked on Black’s leg for a few minutes, then grabbed a kendo stick and hit him with it a few times. Later, Black set up a table on the outside, but Styles hit him with a chair on the leg and back. Really slow and boring match so far and the crowd almost sounds silent.

Styles locked on a Calf Crusher, but Black grabbed a kendo stick and choked Styles with it, breaking the hold, then repeatedly hit Styles with it.

They fought on the German announce table, and Black eventually jumped off of the table and drove Styles through a regular table at ringside with a meteora.

Gallows and Anderson suddenly swarmed on Black and hit him with a Magic Killer in the ring. They held Black up as Styles prepared for a Phenomenal Forearm, but the lights suddenly went out and the Undertaker’s bell hit… The lights came back on and Taker took out Gallows and Anderson. Styles jumped at Taker, but he grabbed him by the throat and hit Styles with a chokeslam. The lights went out again and when they came back on, Undertaker was gone. 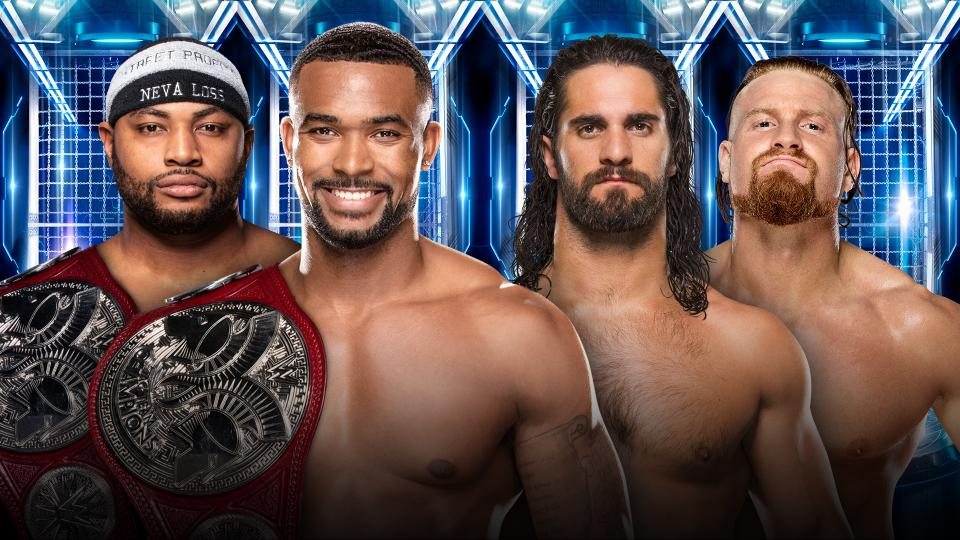 Backstage, The Street Profits cut a promo and said that they won’t be “one and done.”

It is really insane how quiet the crowd has been tonight. Feels like the quietest PPV crowd I have ever heard. It feels like nothing has happened 10 minutes into the match.

A few minutes in, Rollins distracted the referee and AOP attacked Montez Ford on the outside. The Viking Raiders then ran out and fought with AOP down the ramp to the back. Whatever. No crowd reaction.

Rollins went for the Stomp, but Ford got up… but Rollins hit him with a buckle bomb. Top rope double knees by Murphy, but Dawkins broke up the pin. Suicide dive by Rollins on Dawkins, but Dawkins caught him and tossed him to the floor.

Kevin Owens suddenly showed up in the crowd and walked to ringside holding a bag of popcorn, then sat on the Spanish announce table. He threw popcorn at Rollins’ face, then Dawkins nailed Rollins from behind.

Murphy tried a somersault to the outside, but the Profits caught him and powerbombed him into the crowd barricade. In the ring, Ford hit a frog splash for the win. Finally over…

After the match, the Street Profits celebrated. Rollins yelled at Murphy as Owens snuck up from behind him and nailed him with a Stunner, then walked down the ramp and poured some popcorn on Murphy. 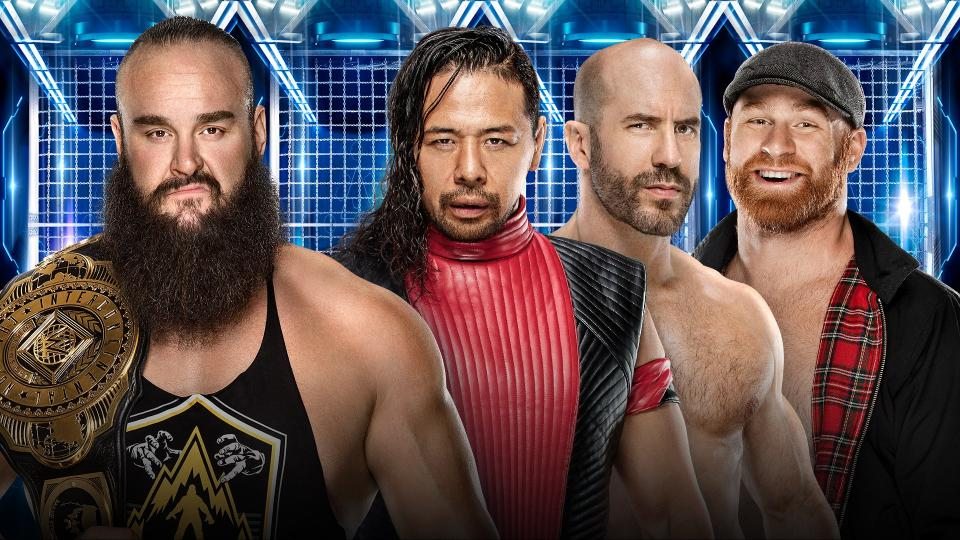 Backstage, Sami Zayn said that he felt very confident tonight and that Braun has not laid a finger on him during their entire feud. But tonight, he’s going to go face to face with Braun. He asked Cesaro and Nakamura to hold their posts on the apron, because he’s going to make sure that the IC title comes back to where it belongs.

In the ring, Nakamura hit Strowman with the Kinshasa. Cesaro went for a Neutralizer, but Strowman broke out of it. Strowman ran at Cesaro but he moved and Strowman went shoulder-first into the ring post. Another Kinshasa by Nakamura. Double suplex by Cesaro and Nakamura as Sami Zayn simultaneously nailed Strowman with a Helluva Kick. 1-2-3! Zayn is the new Intercontinental champ.

The heels celebrated after the match as Strowman screamed that he was going to get Zayn. 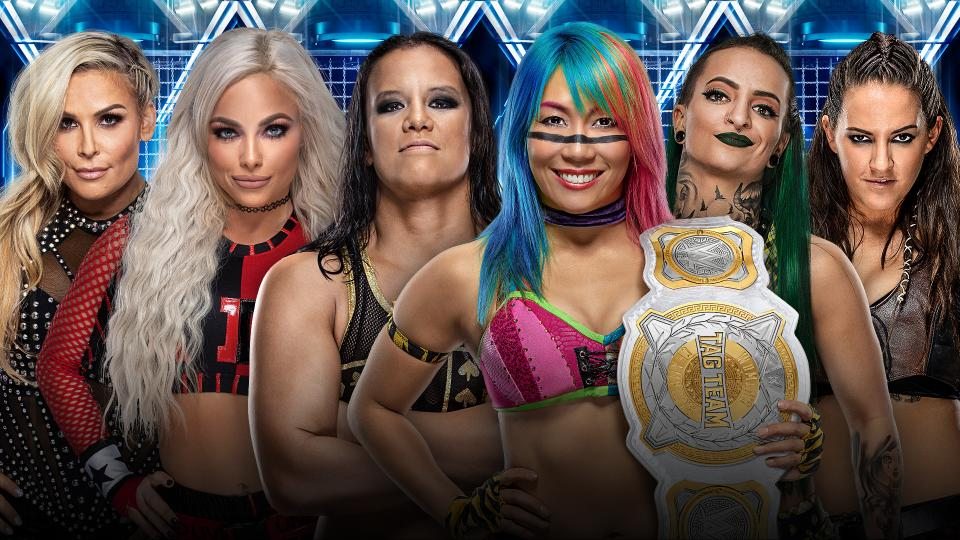 Natalya and Ruby Riott started off and Natalya smashed her into the cage, then locked on the Sharpshooter, but Ruby escaped and tossed her off into Liv Morgan’s pod.

Sarah Logan entered. She went after Ruby, but Ruby climbed onto Liv Morgan’s pod and Sarah followed. Logan knocked Ruby down and Natalya powerbombed her. Logan then dived off of the pod with a crossbody onto Natalya and Ruby.

Shayna Baszler entered and quickly locked on the Kirifuda Clutch on Logan and she tapped. Sarah Logan was eliminated by Shayna Baszler.

Baszler locked on the Kirifuda Clutch on Riott and she tapped. Ruby Riott was eliminated by Shayna Baszler.

Baszler tossed Natalya into a pod and stomped on her then repeatedly slammed the pod door onto her. Kirifuda Clutch… and Natalya tapped. Natalya was eliminated by Shayna Baszler.

Baszler walked around the ring alone for a couple of minutes and taunted Asuka and Liv Morgan as they yelled back at her.

Liv Morgan entered next. She went after Shayna and tried a hurricanrana, but Shayna caught her and slammed her into the cage, then hard into the pod. Becky Lynch was shown watching backstage. Kirifuda Clutch on Morgan in front of Asuka’s pod and she was out. Liv Morgan was eliminated by Shayna Baszler.

Baszler is going to WrestleMania to face Becky Lynch for the Raw Women’s Championship. Becky was shown watching on a TV backstage.