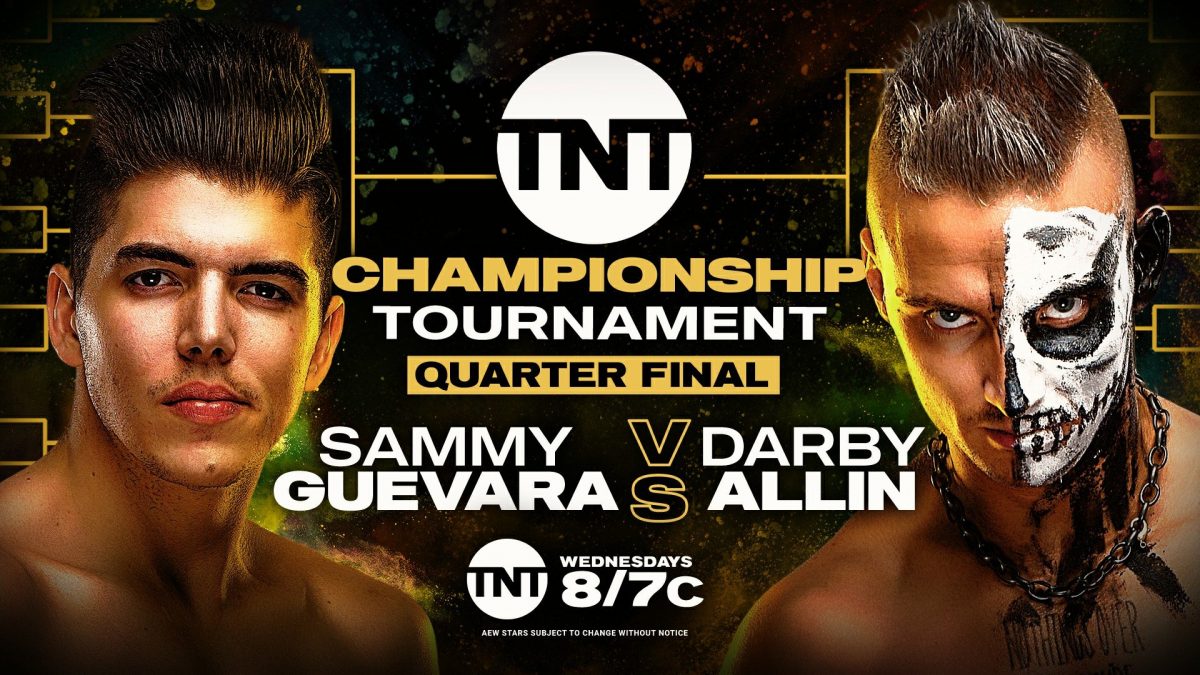 All Empty-arena Wrestling opens up with a vignette from Cody Rhodes discussing the TNT Title Tournament. He talks about all of the competitors in the tournament and how he needs this championship.

This is a rematch from “Revolution” along with being a quarterfinals match. Guevara blindsides Allin on in the entranceway with a Fossbury Flop and tosses him all around ringside. Guevara pulls out a ladder from under the ring and sets it up between the ring and the barricade like a bridge. Guevara lays Allin out on the ladder and then climbs up top and hits a Frog Splash on Allin and the ladder in a sick bump!

Back from the bell, Guevara rolls Allin into the ring and the bell finally rings to start the match. Guevara quickly gets a nearfall and then starts blatantly stomping on his head. Guevara crotches Allin on the top rope and climbs up with him for a Superplex, but Allin cuts him off causing Guevara to fall back and have his knee caught in the turnbuckle.

Allin pulls Guevara’s boot off and puts him in a Hanging Ankle Lock still sitting on the top rope. Allin drops Guevara and then chop blocks at his ankle before headbutting the foot repeatedly. Guevara kicks Allin away with his good foot and then hits a Springboard Cutter but grabs his foot and can’t concentrate when he lands. Guevara finally slides over and gets a nearfall on Allin.

Allin’s nose is busted open but he manages to surprise Guevara by rolling him up and locking in a Heel Hook. Guevara fights to the ropes but Allin pulls him back and starts slapping him. Allin and Guevara swap Forearm Smashes with Guevara capping off the exchange with a Spinning Back Fist for a nearfall.

Back from the break Allin attempts a Tope Suicida to the outside but Guevara dives out of the way causing Allin to crash into the barricade. Guevara rolls Allin back in the ring and then goes up top and hits the 630 Splash! 1…2…NO Allin grabs the bottom rope to break the hold.

Guevara knees Allin in the gut and attempts a Suplex but Allin counters into a Flipping Stunner. Allin attempts a Springboard Coffin Drop but Sammy catches him in midair for the modified GTS. Allin blocks it and counters into the Last Supper for the pin.

It cuts to a normal looking Hardy talking in his normal voice. Hardy calls Jericho a megalomaniac and says that AEW isn’t a platform for Jericho or even him, it’s a platform for the future and he wants to protect that future. He again challenges Guevara to come face him and says that he will keep kicking everyone’s asses in the Inner Circle until he gets to Jericho.

Omega takes Angels down but Angels counters with a Hammerlock. Omega counters into a side headlock. Angels shoves Omega into the rope but eats a Shoulderblock. Omega goes for the Snap Dragon but Angels blocks it only to eat a Roundhouse Kick and a series of chops.

Omega goes for the Snap Dragon again but Angels bites his hand and hits a Basement Dropkick followed by a Backsplash Senton. He goes for a second senton but Omega gets his knees up and then murders him with a Lifting Backbreaker for a nearfall.

Angels comes back with a series of body shots in the corner only to get destroyed with a Lariat. Angels crawls to the apron and grabs a hold of the apron as Omega tries to pull him back in. Angels kicks Omega away and then catches Angels with a Jawbreaker onto the top rope. He then grabs he apron – which Omega was standing on – and pulls it out from under him.

Angels goes to the top for a Frog Splash but Omega moves out of the way and attempts a V-Trigger. Angels sidesteps it and nails Omega with an Enziguri. He attempts a Lariat but Omega ducks and hits the Snap Dragon. Omega murders Angels with the V-Trigger but Angels kicks out at two.

Omega hits a Gutwrench Powerbomb followed by a second V-Trigger for the pin.

A terrific vignette highlights Scorpio Sky’s career. Sky says that a lot of kids growing up wanting to be a police man or even a super hero but he always just wanted to be a wrestler. He says he wanted it as much as he wanted air.

Sky talks about a serious back injury he suffered and the doctor told him he needed surgery that would end his career. He said he woke up one day and his back simply didn’t hurt anymore and called it a miracle. He said that he felt like he simply never got an opportunity and he was about to quit when he decided to give it one more shot. This will continue next week.

Footage of Dustin Rhodes saying that he will retire if he doesn’t win tonight is shown.

Last week Havoc hit a Fisherman’s Buster on OC on the floor leading to this match. Havoc attacks OC as he makes his entrance and actually uses his own jacket as a weapon by choking him with it. Havoc chops OC and chokes him with his own shirt now.

Havoc hits a Ripcord Lariat and then locks him a Cross Armbreaker. OC gets to the ropes to break the hold but then Havoc starts bending his hand back trying to break it before biting the hand. Havoc puts OC’s hand in his own pockets and starts kicking him. OC rolls underneath a Roundhouse Kick attempt and then dropkicks Havoc to the floor.

OC hits a Tope Suicida to Havoc on the floor and then a Flying Cross Body in the ring followed by a Satellite DDT for a nearfall. OC goes for a Brainbuster but Havoc lifts up to the top rope and hits a big uppercut. Havoc climbs up with OC but OC shoves him off and then hits a Lazy Splash for a nearfall.

OC and Havoc exchange strikes that Havoc caps off with a big Forearm Smash. Havoc then goes for a Ripcord Lariat but OC ducks and hits a big Flying Forearm. Penelope Ford gets up on the apron to distract OC. Taylor tries to pull her off but she does a split and then Sabian comes flying out of nowhere with a Somersault Plancha onto the Best Friends. Ford attempts to dive onto OC but he moves and this distracts Havoc long enough for OC to roll him up for the pin.

MJF cuts a promo from his home. He says that we are going through an awful time that this country has never seen because no MJF on Dynamite is a travesty. MJF mocks crying as he says that he suffered a very serious injury while gambling a few weeks ago. He says he suffered a hangnail but he powered through it and continued gambling all night. He says his injury became life threatening but he will fight through it and he will rise like a phoenix and become AEW Champion.

Wardlow tosses Johnson all around to start the match. He hits a crazy Guerrilla Press into a Powerslam and then a series of Release Suplexes. He goes for another suplex but Johnson lands on his feet and hits a series of forearms. Wardlow tosses Johnson into the corner and then lifts up onto the rope rope and pulls him down into a Knee Strike. Wardlow hits an insane Airplane Spin off his shoulders for the pin.

A vignette airs of a guy listening to a voicemail from “Samantha” dumping him and looking at a story about – presumably him – a Heisman hopeful being injured. This person visits the Dark Order website and sends an email to it.

Brodie Lee appears and says that Evil Uno has told him a lot about this person’s past and he gets his frustrations. He asks the person how big he is and if he played college football. Lee says that a lot of people in AEW didn’t work for their success and they were handed it.

Lee attacks Law at the bell and lays into him with some vicious chops and other strikes. Lee hits a Superkick followed by a Vertical Suplex and a Half Nelson Suplex. Lee hits a Black Hole Slam and then a Spinning Lariat for the pin.

Another Bubbly Bunch segment airs. Guevara says he’s been down since Hager lost to Moxley but Ortiz says that had they all been there it would have been a different story and it’s only a matter of a time. Hager says that Sammy is too beautiful to be sad because sadness is for ugly people. Hager says next time he sees Moxley he’s going to kick his ass and he won’t be able to cheat to win.

Santana suggests they do a “Flim Flam” video but I have no idea what that is. Jericho says that the winner wins a bottle of sanitizer. They do a bunch of weird dancing Tik Tok videos. Jericho gets pissed and calls Guevara a showoff when he starts break-dancing.

A great video package highlights Dustin Rhodes’ career. He emphasizes how he could cement his legacy by being the first TNT Champion.

If Rhodes loses he says that he will retire from wrestling. Rhodes offers a handshake before the match but Sabian refuses and locks up with him. Rhodes puts Sabian in a Wristlock but Sabian rolls through only for Rhodes to sit down on his arm and hold onto the wristlock.

Rhodes shoves Sabian into the ropes and Sabian shows off his speed by avoiding Rhodes before finally getting caught with an Uppercut. Rhodes takes Sabian over with an Armdrag and holds onto an Armlock.

TNT’s signal crapped out of me for a few minutes and when it comes back on Sabian is choking Rhodes in the ropes. The signal goes out again – I don’t know if it was a TNT issue or a Dish Network issue – but comes back as Sabian has Rhodes in an Armbar.

Sabian hits the ropes but runs into a Spinebuster. Rhodes hits Sabian with an Uppercut and then an Atomic Drop followed by a Bulldog. Rhodes hits a Snap Powerslam for a nearfall. Sabian sidesteps a charging Rhodes in the corner and then hits a Springboard Tornado DDT for a nearfall.

Sabian gets frustrated and mounts on top of Rhodes and punches him in the face repeatedly until the referee pulls him off. Ford attempts to interfere but Brandi Spears her. That distracts Sabian enough for Rhodes to catch him with a Code Red (Canadian Destroyer) for the pin.