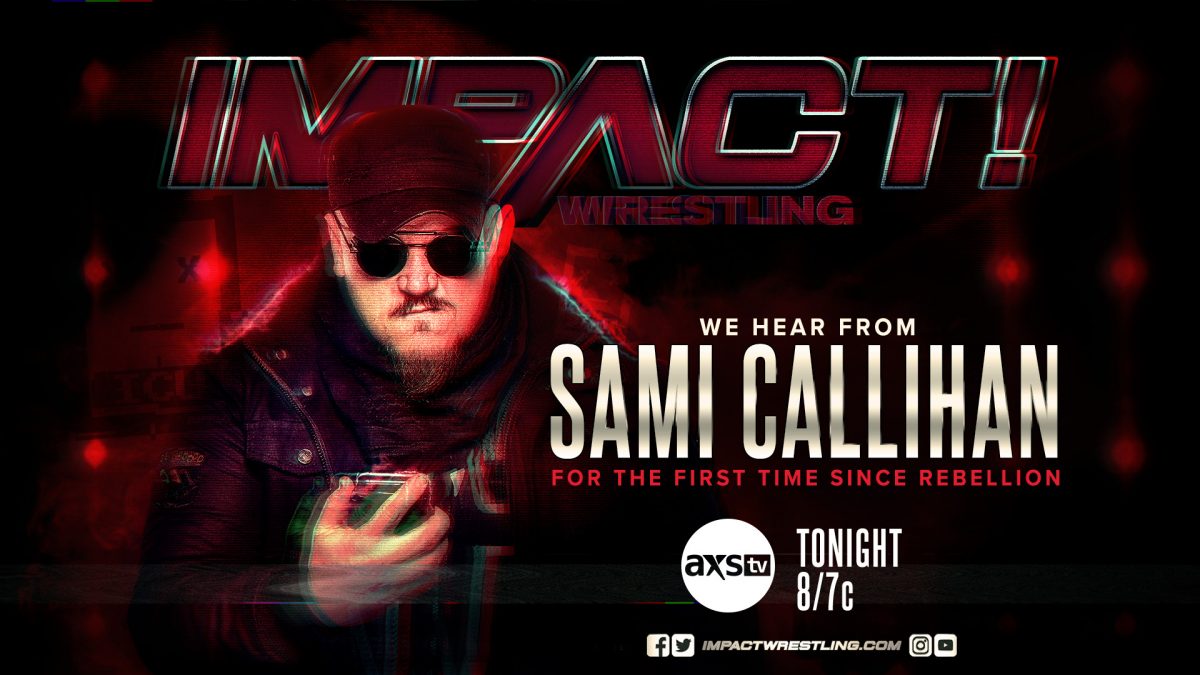 May 5, 2020
Nashville, TN
Results by ImpactWrestling.com

Sami Callihan is in the ring to address his Unsanctioned Match against Ken Shamrock at Rebellion. Callihan says it was wrong of the referee to stop the match after he passed out to the Ankle Lock. Callihan also explains that the reason he attacked his former oVe teammates was because he doesn’t need help from anybody. Callihan calls out Ken Shamrock, prompting the MMA legend to come to the ring. Shamrock praises Callihan for not tapping out – he’s tapped out the likes of Big Show, Bas Rutten, The Rock and others. Shamrock suggests they shake hands and focus on the World Title when Michael Elgin interrupts. Elgin calls himself the rightful number one contender, claiming the line starts behind him. Callihan disrespects Elgin and a brawl erupts. Elgin retreats as Callihan bumps into Shamrock in the middle of the ring. Callihan presses a button, causing the lights to go out. When they come back on, Shamrock is standing alone in the ring.

Backstage, Chris Bey says there is no uncertainty on who the number one contender for the X-Division Title is after winning the four-way match last week at Rebellion. Bey says he only needs one shot to make it the Finesse Division.

.@DashingChrisBey considers himself the number one contender in the X-Division. #IMPACTonAXSTV pic.twitter.com/1xHcu7Fg5L

X-Division Champion Willie Mack responds to Chris Bey by saying the only thing he is finessing is a foot up his rear end – but he’ll give him a title shot later tonight.

Larry lifts Fulton over his shoulders and hits a powerslam. Larry does the same to Jake, the follows up with a running leg drop. Fulton drives Acey into the steel ring steps, gaining control for oVe. They exchange big shots in the middle of the ring. Acey builds momentum with a back body drop, followed by a Spinebuster. Larry dives through the ropes, colliding with Jake on the outside. oVe hits Larry with a double-team neckbreaker off the top but Acey breaks up the pin. Dave attempts to get involved on the apron but Larry knocks him to the floor with a right hand. Larry catches Jake with The Best Hand in the House to win.

Madison questions Havok on her loss to Rosemary in Full Metal Mayhem last week. This infuriates Havok and she threatens Madison to knock it off. Madison brings up the mysterious arrival of Nevaeh. Havok calls her an old friend but says she doesn’t know why she’s here. Madison introduces someone else from Havok’s past – surprise guest, Kimber Lee. She claims that she will take her spot at the top of the Knockouts division. Swinger attempts to make a move but gets tossed aside. Havok grabs Kimber by her collar as Madison Rayne signs off from this edition of Locker Room Talk.

.@MadisonRayne tried to get to the bottom of @FearHavok‘s relationship with @nevaehOi4k but the debuting KIMBER LEE added a whole new layer to the story. #IMPACTonAXSTV @Kimber_Lee90 pic.twitter.com/Llljb85XgT

Cody Deaner gives us an inside look on his approach to social distancing.

Swinger rakes the eyes but it has no effect due to Suicide’s mask. Suicide hits a crossbody over the top to the floor. Swinger hits a powerful back body drop for two. Suicide counters a swinging neckbreaker into the Codebreaker. Suicide connects with a Swanton off the top to win.

Former X-Division Champion Ace Austin announces that due to his contractually obligated rematch, tonight’s main event will be a three-way bout featuring Willie Mack vs Chris Bey vs Ace Austin for the X-Division Title.

Josh Mathews interviews the self-proclaimed TNA World Heavyweight Champion, Moose. He talks about defeating some of the top talent that IMPACT Wrestling has to offer. Moose states that because the true IMPACT World Champion Tessa Blanchard is stuck in Mexico, he should be considered the real World Champion. Mathews announces a #1 Contenders Tournament for the World Title that kicks off next week. Competing in the single-elimination tourmament will be Moose, Trey, Sami Callihan, Michael Elgin, Ken Shamrock, Rhino, Madman Fulton and Hernandez. Moose immediately announces that he’s pulling out of the tournament because he has no interest in the IMPACT World Title, he already holds the most prestigious Championship in wrestling.

Ryan starts a game of cat and mouse, baiting Jake into a series of shots. Jake quickly gains control, sending Ryan to the outside for a breather. Jake hits a strong clothesline. Ryan connects with a big dropkick but it doesn’t have much effect. Jake sends Ryan crashing into the mat with a powerslam. Jake hits a massive sit-down powerbomb for two. Jake hits the ropes but Ryan cuts him off with a superkick, the former Sweet Tooth Music. Ryan uses the referee as a shield and rolls up Jake with a hold of the tights to steal the victory.

Impact Tag Team Championship
The North (c) vs. The Creeps

We head to the Don Kolov Arena in Toronto, Canada where The North are set to defend their Tag Team Championships against opponents they picked themselves. They supposedly scouted all across Canada for the toughest competition they could find. When their opponents come out, that’s obviously not the case. The North will defend the IMPACT Tag Team Championships against – The Creeps. They make quick work of their undeserving opponents before signing off.

Rosemary determines what’s next for her. She receives a mysterious message, claiming that someone is speaking to her.

.@WeAreRosemary is at a crossroads so she turned to the cards to guide her path. #IMPACTonAXSTV pic.twitter.com/QNxu5laqRA

Rohit Raju announces that he’s replacing Moose in the #1 Contenders Tournament for the IMPACT World Title.

.@HakimZane is on his own path now and he feels he DESERVES the opportunity in the #1 Contenders Tournament. #IMPACTonAXSTV pic.twitter.com/YJLwfcGtjJ

Ace jump-starts the match by grabbing the X-Division Title belt from the referee. He swings and misses as Willie ducks his attack. Willie hits Ace with a Hurricanrana, followed by a double clothesline to both of his opponents. Willie is on fire, connecting with a double Samoan Drop and Moonsault. Ace dropkicks Willie off the apron, allowing him to continue his assault on Bey. Ace hits a leg drop from ethe second rope for two. Willie connects with an Exploder Suplex to Bey. Willie and Ace are jockeying for position in the corner when Bey sends them both crashing to the mat. Willie hits Bey with the Stunner. Willie is about go for the Six-Star Frog Splash but Ace sends him flying with head scissors from the top. Ace hits Willie with The Fold but Bey breaks up the pin. Ace hits another Fold on Bey but this time, Willie breaks it up. Willie connects with the Six-Star Frog Splash on Ace to win.