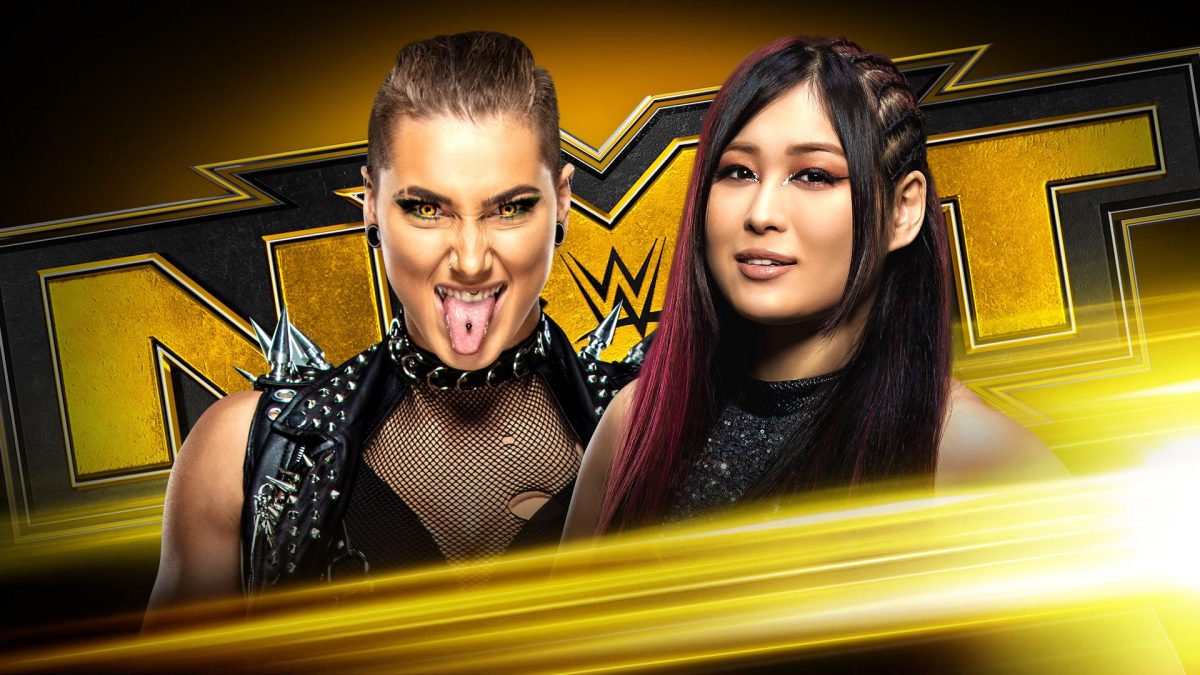 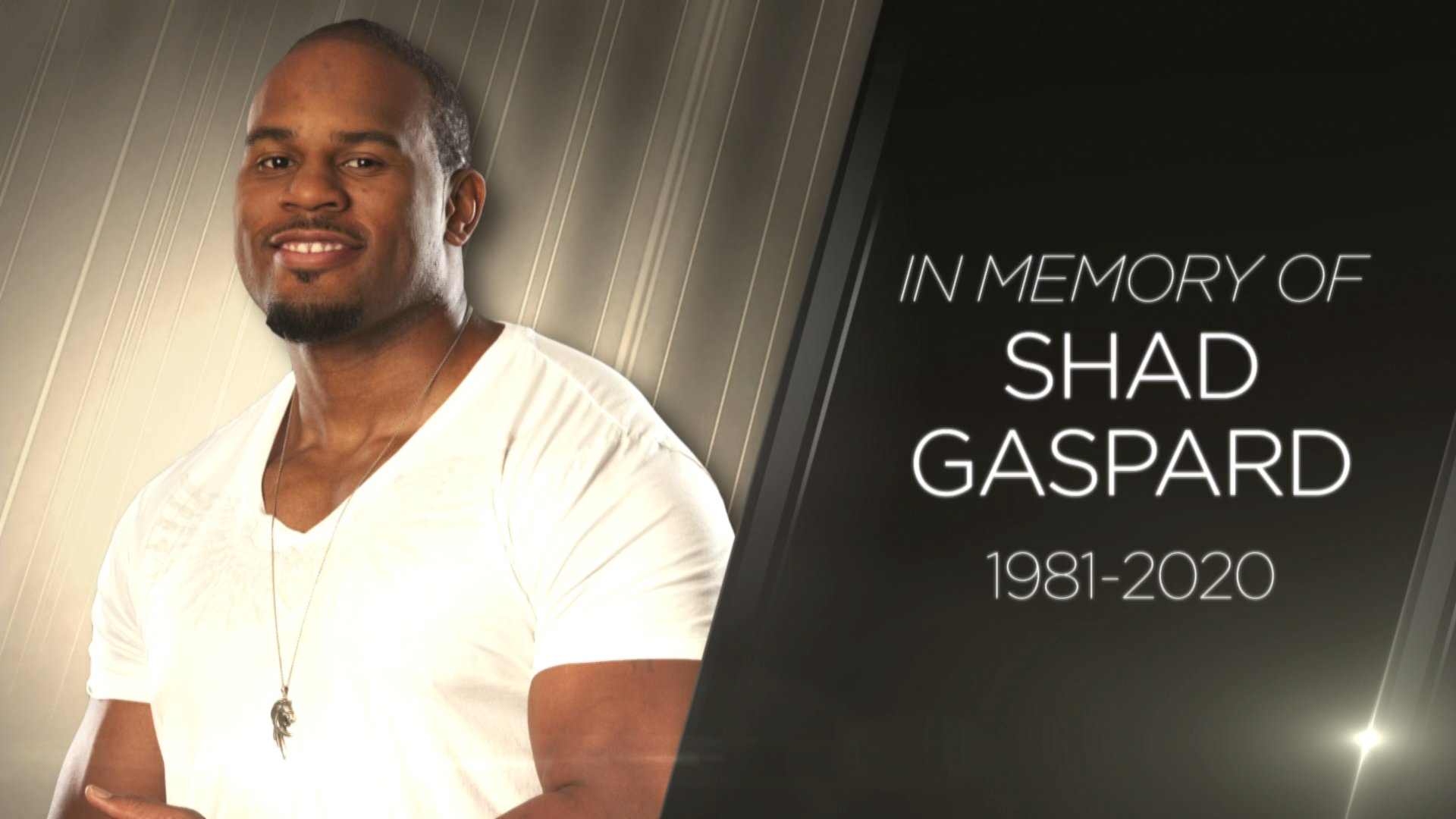 Kross immediately grabs the enhancement talent and slams him with an exploder. Kross follows up with a northern lights suplex and a Doomsday Saito. Kross applies the Kross Jacket for the submission.

Tommaso Ciampa comes out and officially introduces himself to Kross and Scarlett. That ring Kross is standing in is his home, but Kross already knew that. That’s why he attacked the main attraction to make a point. Part of him kind of respects Kross. The aura surrounding Kross is special. Kross is in a locker room full of the best professional wrestlers in the world and he stands out. His entrance is killer. Ciampa gets on the apron, and Scarlett holds the ropes open for him. Ciampa says he is also special. That’s why he’s out here to look Kross in the eyes. On June 7 at TakeOver, it’ll be Ciampa versus Kross. That’s special. Ciampa says, “Welcome to the main event.” They stare at each other before Ciampa backs up and leaves.

We come back from the break to see Fantasma fight out of a submission and sweep Tozawa’s feet. Fantasma pulls him out onto the apron and hits a diving frog splash!

Fantasma hits a slingshot senton for a near fall. Tozawa goes for a kick, but Fantasma blocks it. Tozawa then spikes him with a German Suplex. Tozawa goes to the top rope, but Fantasma crotches him. Fantasma goes for a superplex, but Tozawa fights him off. Fantasma elbows him in the head to knock him to the apron. Tozawa quickly gets up, and Fantasma lifts him up before dropping him ribs-first on the metal turnbuckle! Fantasma picks up a near fall.

Fantasma sends him into the ropes for a back suplex, but Tozawa counters into a wheelbarrow bulldog. Tozawa goes to the top and connects with his diving senton, but Fantasma rolls out of the ring. Tozawa gets him in the ring and covers for a near fall. Fantasma fights back and knocks him out of the ring before hitting a suicide dive. Fantasma hits a running back elbow lifting him up. Tozawa elbows out and applies the octopus stretch. Fantasma fights it and hits the Phantom Driver for the win!

Even though Fantasma and Tozawa have the same record, Fantasma defeating Tozawa sends him to the finals of the Interim NXT Cruiserweight Championship Tournament.

Video Package: Imperium defeats Matt Riddle and Timothy Thatcher for the NXT Tag Team Championship. Riddle and Thatcher broke up and had a match in the main event. Riddle defeated Thatcher, but Thatcher attacked him after the match.

Timothy Thatcher challenges Matt Riddle to a match where you can only win by knockout or tap out. Riddle can name the place it happens. He’s ready.

Video Package: Shotzi Blackheart is just like a tank because tanks don’t give a shit. She’s coming for Dakota Kai and Raquel Gonzalez. They can’t handle her. Blackheart runs over some cars with the tank and compares it to the women of NXT.

They circle the ring, and Garrett applies a waistlock. Yim whips her to the corner, but Garrett slingshots over her. They trade arm drags and go for dropkciks. Garrett kicks her and sends her to the corner. Garrett hits a handspring back elbow before hitting a suplex for a two count. Yim quickly floors her with a vicious dragon suplex before kicking her in the face a few times. Yim follows up with Protect Ya Neck for the win.

Johnny Gargano and Candice LeRae come out to the stage. They sarcastically congratulate her on her win, but she dropped the ball against the NXT Women’s Champion because she was too busy catering to the people. LeRae would have thrived in that spot. Too bad Yim took it away from her. Gargano wants to show what happens in their NXT when someone gets something they don’t deserve.

Yim knocks Gargano off the apron, but LeRae attacks her from behind. Gargano pulls the ropes down to get Yim out of the ring. Keith Lee comes down, and Gargano quickly runs into the ring. Lee and Yim get in the ring, but Gargano and LeRae run away.

Cameron Grimes says one of the greatest NXT Champions and first-ever Universal Champion was beaten by him. Grimes used to look up to Bálor, but after he caved him in Bálor was looking up to him. People might say it was an upset or a crime, but it’s Grimes Time. 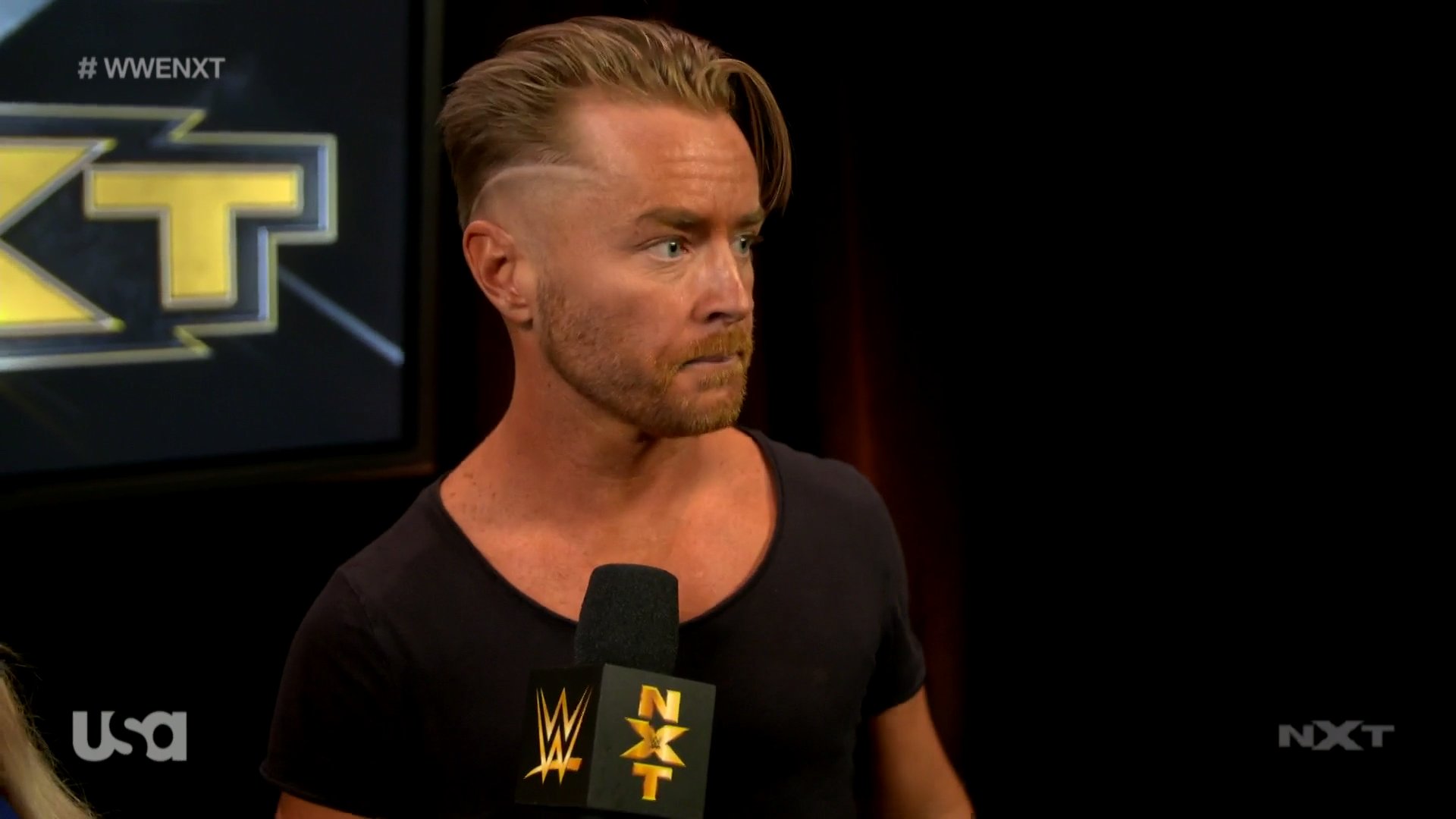 Drake Maverick says he has to face the best wrestler in the world in Kushida. He can beat him by pin or submission. Maverick is not Bret “Hitman” Hart. Maverick is tired of pep talks and TED Talks. He only has to do one thing tonight: win.

We come back from the break to see Strong attacking Lumis in the corner. Strong hits a running forearm to the face before hitting another backbreaker for a two count. Strong stretches him out and rips at the face. Strong lets go and kicks him in the face. Strong connects with an Olympic Slam and picks away at him.

Strong hits the ropes, but Lumis hits a Lou Thesz Press and punches him. Lumis uppercuts him a few times before hitting a big back body drop. Lumis hits a slingshot suplex for a near fall. Strong rocks him with a back elbow and boots him back a few times. Strong chops him, but Lumis appears to be enjoying it. Strong strikes away at him and charges, but Lumis hits a big spinebuster. Strong quickly takes him down and twists him around for a pin!

Lumis slides out of the ring and traps Strong in the Kata Gatame! The UE run down to break it up, but Lumis won’t release the hold. Velveteen Dream runs down and attacks Bobby Fish before knocking Adam Cole over the barricade. Dream goes to the top rope and dives off to the concrete with a Purple Rainmaker on Cole! Dream struggles to get to ringside and poses.

El Hijo del Fantasma prevents Akira Tozawa from being taken by the masked wrestlers in the van.

Burch and Lorcan absolutely dominate Ever-Rise, getting the better of them every which way. They apply a single leg crab and crossface to each. They tap out.

Matt Riddle talks about beating Timothy Thatcher and being attacked after. Thatcher isn’t a stallion. He’s a putz. Riddle is down for Thatcher’s challenge and says it’ll take place in a cage!

If Maverick wins this match, it’ll be a three-way tie in the Group A standings. El Hijo del Fantasma is already in the finals having won the Group B standings.

Jake Atlas comes to ringside to watch this match. Kushida dropkicks Maverick into the corner and takes him down. Kushida slams the arm and hits a cartwheel dropkick.

We come back from the break to see Maverick slingshot over Kushida and hit a drop-toe-hold into the turnbuckle. Maverick hits a missile dropkick and follows up with a sunset flip powerbomb for a near fall. Kushida quickly kicks him in the arm and punches him in the face. Kushida punches him again before forearming him in the corner. Kushida wrenches the arm and stomps it before throwing him out of the ring.

Kushida takes Maverick down and puts him in the ring before viciously attacking the arm. Kushida applies a hammerlock, and Maverick screams in pain before getting to the ropes. Maverick refuses to let the referee stop the match. Kushida takes him down before hooking the arm. Maverick screams in pain, realizing his career would be over with a submission. Kushida applies a hammerlock, and Maverick screams for the referee to not stop the match. Maverick is able to get a foot on the bottom rope. Kushida hits a running palm strike and goes to the second rope. Maverick uppercuts him and climbs the ropes, but Kushida wrenches the arm. Maverick gets out and tries for a move, but Kushida counters into a cross arm breaker attempt! Maverick rolls him over and pins him!

Drake Maverick celebrates big time in the ring! It’s a three-way tie in Group A. Kushida, Jake Atlas, and Drake Maverick are all tied up.

Byron Saxton says he has news everyone wants to hear. Saxton just heard from NXT General Manager William Regal. The three of them are tied in records. Next week, they’ll face each other in a triple threat match. The winner of that match will advance to the finals of the NXT Cruiserweight Championship Tournament.

NEXT WEEK on #WWENXT:
👊@WWEMaverick @KUSHIDA_0904 & @iamjakeatlas will BATTLE to determine who will face @hijodelfantasma in the #NXTCruiserweight Championship Tournament Finals!
👊@SuperKingofBros will meet Timothy Thatcher in a CAGE FIGHT! pic.twitter.com/WeMZRYZJMZ

Kushida, Drake Maverick, and Jake Atlas will battle next week with the winner going to the finals of the NXT Cruiserweight Championship Tournament. We’ll also see Matt Riddle battle Timothy Thatcher in a Cage Fight.

Damian Priest says he desires to be a champion, but that will come. Finn Bálor put this place on the map. For that reason, he’s coming for him. He won’t just do it on any old stage. He’ll do it at a place Bálor made a name for himself: TakeOver. At TakeOver, the name Finn Bálor will turn to ash while Damian Priest will live forever.

Shirai dropkicks Ripley at the sound of the bell. Ripley quickly sends her into the ropes, but she lowers her head and eats a kick. Shirai charges, but Ripley lifts her. Shirai scratches the back to get out. Ripley hits a pair of short-arm clotheslines followed by a big dropkick to the apron. Ripley attack Shirai and slams her down on her face twice. Shirai gets out of a third one and rolls her before hitting a double stomp for a two count.

We come back from the break to see Ripley avoid a handspring. They hit the ropes, and Ripley counters a hurricanrana. Shirai counters the counter into a sunset flip for a two count. Shirai then goes to a crossface. Ripley powers up and slams her into the corner. Shirai kicks her back and goes to the top rope. Ripley punches her in the face and head-butts her. Ripley clubs the back and tries for a superplex, but Shirai fights it. Ripley head-butts away at her and hits a vicious superplex for a near fall.

Ripley pulls at the hair, and Shirai punches her in the face a few times. Ripley punches back at her and stands over her. Shirai flips through a back suplex and goes back to the crossface. Ripley gets to the ropes to break it. Shirai hits a tiger feint kick and hits a springboard dropkick out of the ring. Shirai then hits a suicide dive.

Charlotte Flair’s music hits, and the NXT Women’s Champion comes out to ringside to watch. Ripley gets Shirai in the ring, but Shirai hits a head-scissor takeover to send Ripley into Flair. Shirai gets Ripley in the ring and hits a running double knee in the corner for a near fall. Shirai clubs away at her before hitting a big spike DDT for a near fall.

Charlotte Flair then runs in the ring and big boots Shirai! Flair sizes Ripley up and spears her down into the mat. Flair holds the NXT Women’s Championship up in the air as her music plays.