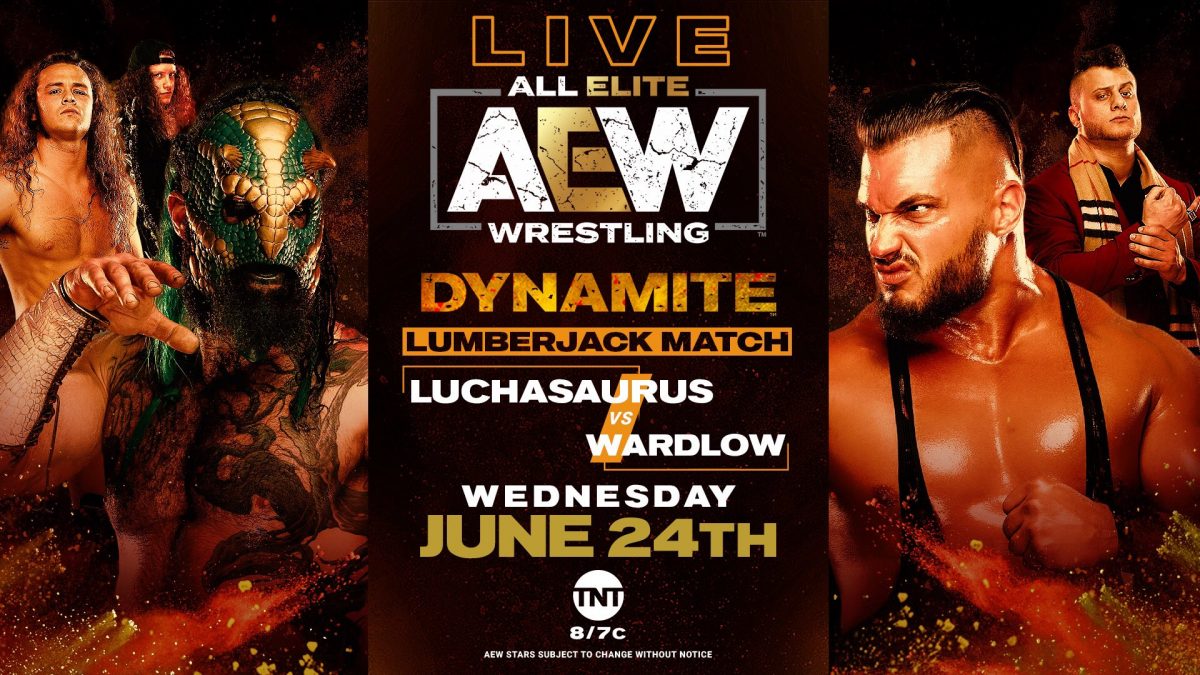 After the match, the lumberjacks enter the ring for a big brawl. It was then announced that Tony Khan said it will be MJF & Wardlow vs. Jungle Boy & Luchasaurus at Fyter Fest.

Britt Baker is shown behind a plexiglass shield drinking on her roll model trailer drinking a beverage.

Shida and Penelope Ford exchange words at ring side and Shida attempts attack Ford. Shida puts Red Velvet in a Falcon Arrow and get the three count.

Shida then goes to ringside, jumps the guardrail and attacks Ford. Both women brawl as the talent try to break it up. It looks like Ricky Starks got his eye poked as he kept putting his hand up to it.

2020 Fyter Fest Press Conference with Cody and Jake Hager. Hager had not shown up. Arn Anderson takes questions from the wrestling media. Arn gives his take on Jake Hager and how it’s not his time, then says Cody is ready to face Hager and can beat him. Cody is asked how it feels to be the first TNT Champion. Cody says it feels like hope and then gives praise to Ricky Starks. Cody said he very much goes by the American Nightmare but still very much believes in the American Dream and that is hope. He said he likes professional wrestling, not play wrestling. He said the service they provide is the hope for the viewers at home. He then talks about the incomplete TNT Title and is interrupted by Jake Hager showing up with his wife. Cody and Hager face-off. Hager puts his fist up to Cody. Hager walks away and Hagers wife picks up a glass of water and throws it in Cody’s face. End of Press Conference.

Brodie Lee locks up with Sonny Kiss. Sonny Kiss goes on the offensive, but Brodie Lee counters and tosses Sonny. Janela is tagged in and is hit by boot to the face. Cabana is tagged in. Janela puts Cabana in an arm bar and tags in Kiss. Lee comes in with a big boot to the face of Janela. Outside interference from The Dark Order with a kick to Kiss on the back of head gives back Cabana and Lee the advantage. Cabana did not see the kick.

Lance Archer then shows up and attacks Sonny Kiss. Janela tries to go for the save, but is taken out by Lance Archer.

FTR comes to the ring in their pickup truck.

We go to a Kenny Omega and Hangman Page and Best Friends video package building up the Tag Team Championship Match at Fyter Fest.

Taz takes the mic and badmouths Jon Moxley and that Fyter Fest is coming and says that Moxley’s championship is in jeopardy.

The Exalted One @ThisBrodieLee‘s got SCU in his sights 👀 #AEWDynamite pic.twitter.com/qJKJoeRg0M

The commentary team then goes through the card for night one and night two of Fyter Fest.

Tony Schiavone is handed a note by Britt Baker badmouthing Big Swole who then comes out and dumps garbage onto Baker.

Hardy’s new drone, NEO 1 comes over the ring. Santana takes Hardy to the corner. Both men lock up at the corner of the ring again and Santana slaps Hardy. Santana has Hardy in the corner and throws punches to the gut of Hardy and then puts the boots to Hardy. Both men are outside the ring. Hardy pushes Santana against the ring post. Hardy throws Santana against the guardrail. Hardy then bites the hand of Santana. Back in the ring, Ortiz distracts Hardy who then takes out Hardy.

Orange Cassidy comes to the ring first. Chris Jericho then comes out to the ring next without the Inner Circle. Jericho then has the mic and asks why the did the chicken cross the road – to get to the other side. He says the joke is dumb and annoying like Orange Cassidy and he is the chicken that crossed the road joke. He says Cassidy’s name is stupid and his wrestling is a joke. He then says when he found out that AEW signed Cassidy, he asked Tony Khan, Cody and The Young Bucks why they signed him. He then started to praise Cassidy a bit, then went back to calling him lazy and a slacker that says he doesn’t have what it takes to make it to the top. Jericho says that at Fyter Fest he will make sure Orange Cassidy will run out of juice.

Cassidy then grabs the mic and then puts it down. He then touches Jericho’s shins with his feet and puts his hands in his pockets. Jericho then takes Cassidy’s sunglasses. Cassidy then takes down Jericho and the sight spills to the outside. Jericho gives Cassidy a hard right hand and then punches Cassidy in the gut. Both men then fight into the stands near the fans that appear to be friends and family of AEW staff. Both men then go to the upper level of Daily’s Place. Jericho slams the remote camera into Cassidy. Jericho then has Cassidy on a crate. Cassidy counters and slams Jericho’s face on the rail. Cassidy is bleeding from his right ear. Cassidy then runs into Jericho and Jericho then goes backwards into a table. A bloody Cassidy stands tall as his music plays while the commentary team hypes Fyter Fest as the show goes off the air.