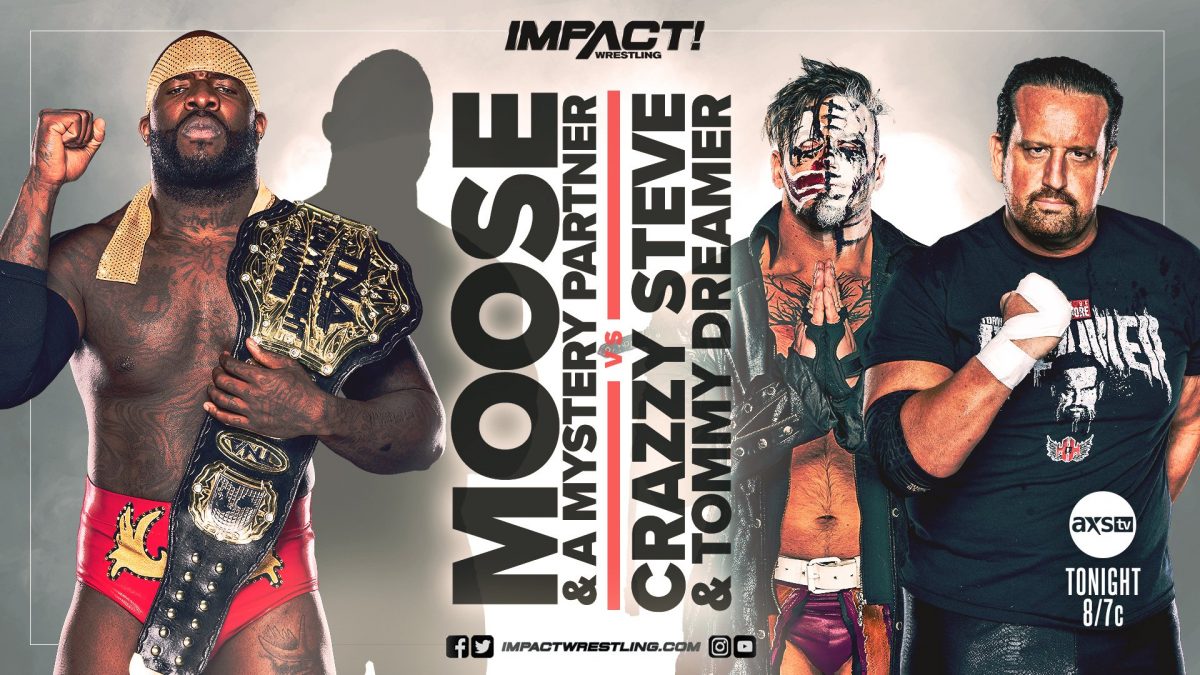 It’s the final episode of IMPACT! before Slammiversary on pay-per-view this Saturday.

There’s a flurry of high-flying offense in the early going as Susie somersaults off the apron, Havok throws Alisha over the top, and Havok dives through the ropes to the floor. Kylie wants to fly but she’s cut off by Taya. Susie picks Lee off the top with a Rana. Taya and Rosemary take out Havok with a double Spear. Alisha hits an impressive double DDT on both Taya and Rosemary. Susie hits Lee with Su Yung’s finisher, the Panic Switch, to win.

After the match, a huge brawl breaks out between all the Knockouts ahead of the #1 Contender Knockouts Gauntlet at Slammiversary. Kylie Rae stands tall as she tends to Susie.

As Hernandez and Rhino continue their arm-wrestling contest, Moose tries to recruit either one of them to be his partner against Tommy Dreamer and Crazzy Steve tonight. After they both turn him down, Moose slaps Hernandez on the back, allowing Rhino to win the arm-wrestling contest that has been going on since last week. Hernandez refuses to give Rhino his money and says that if he wants, he can take it outside.

But @SuperMexCTM is not happy! #IMPACTonAXSTV pic.twitter.com/SvBlVAiNeK

Acey hits Snake Eyes in the corner, followed by a running a crossbody. Acey goes for the pin but Jake breaks it up. Acey clobbers Jake with a shoulder tackle. Larry connects with a sit-down Powerbomb on Cody but Jake is the legal man and he pins Larry from behind to win.

After the match, XXXL attack The Deaners in a shocking change of attitude. Acey launches himself off the second rope, taking out Jake with a massive elbow drop.

Moose’s last resort is to recruit Rohit Raju to be his partner tonight. At first, Rohit is furious that he was Moose’s last choice but eventually accepts his offer.

Johnny Swinger confronts referee Brandon Tolle after he banned Swinger from ringside during Chris Bey’s X-Division Title match at Slammiversary. Swinger threatens Tolle with a lawsuit, convincing him to reverse his decision.

Chris Bey tries to make a move on Gia Miller but in the process, Johnny Swinger overhears him dragging his name through the mud. Even though Swinger is now allowed to be at ringside, Swinger tells Bey that he’s on his own at Slammiversary.

Jimmy Jacobs hosts the contract signing for Jordynne Grace vs Deonna Purrazzo with the Knockouts Championship on the line at Slammiversary. Deonna tells Jordynne that she is stepping into the ring with class and she will be exiting the ring without the Knockouts Championship. Grace doesn’t back down and claims that Deonna doesn’t know what she’s getting herself into as she slams The Virtuosa’s face off the table.

Before Dreamer challenges Moose for the TNA World Heavyweight Championship this Saturday at Slammiversary, they meet in tag team action. Moose sends Steve flying across the ring with a Fallaway Slam. Moose charges into the corner but Steve sidesteps him. Steve and Dreamer double team the self-proclaimed TNA World Heavyweight Champion. Dreamer dropkicks Steve into a crossbody to Moose. Dreamer is about to fly but Rohit cuts him off with a clothesline. Moose and Dreamer brawl outside the ring as Dreamer sends him into the steel ring post. Steve hits Rohit with a top rope DDT to win.

Hernandez and Rhino look to settle their bet in a parking lot brawl. Rhino gains the upper-hand with a low blow. Rhino thinks he’s won when Hernandez chokes him with his bandanna. The fight continues as Hernandez assaults Rhino with a parking cone. It comes to an end when Rhino hits a devastating Gore, driving Hernandez into a steel fence. Rhino and Hernandez earn each other’s respect and split the cash 50/50.

Ace Austin reflects on his journey in IMPACT Wrestling, all leading to this Saturday’s four-way match against Eddie Edwards, Trey and a mystery opponent for the vacant World Title. Ace claims that he will become the youngest World Champion of all time.

One year ago, @The_Ace_Austin wasn’t even on #Slammiversary.

One year later, he’s in the main event.

Can Ace Austin cap off his incredible year by becoming the youngest IMPACT World Champion of all time THIS SATURDAY at #Slammiversary? #IMPACTonAXSTV pic.twitter.com/dtNmJntrHP

Eddie Edwards says that he has stayed in IMPACT Wrestling for a reason – he is meant to be the World Champion and at Slammiversary, he will become just that.

.@TheEddieEdwards has been the heart and soul of IMPACT Wrestling for the last six years.

This Saturday at #Slammiversary he has a chance to reach the mountaintop and become IMPACT World Champion once again. #IMPACTonAXSTV pic.twitter.com/QYXUqErtSW

While Ace Austin and Madman Fulton train at their old gym in Dayton, Ohio, Trey and Wentz find out where they are on social media. Trey and Wentz sneak into the building. Wentz locks Fulton in a room, allowing Trey to have Ace to himself. Trey attacks Ace from behind as they brawl all over the training center. Ace turns the tide by launching a steel chair into his face. Ace cracks a broom over his back and delivers multiple shots on the apron. Fulton escapes from the room he was trapped in and is about to join Ace in finishing off Trey when Wentz appears and holds them off with a barbed-wire steel chair.

Scott D’Amore receives a signed contract from someone who is scheduled to arrive this Saturday – Slammiversary just got more exciting.