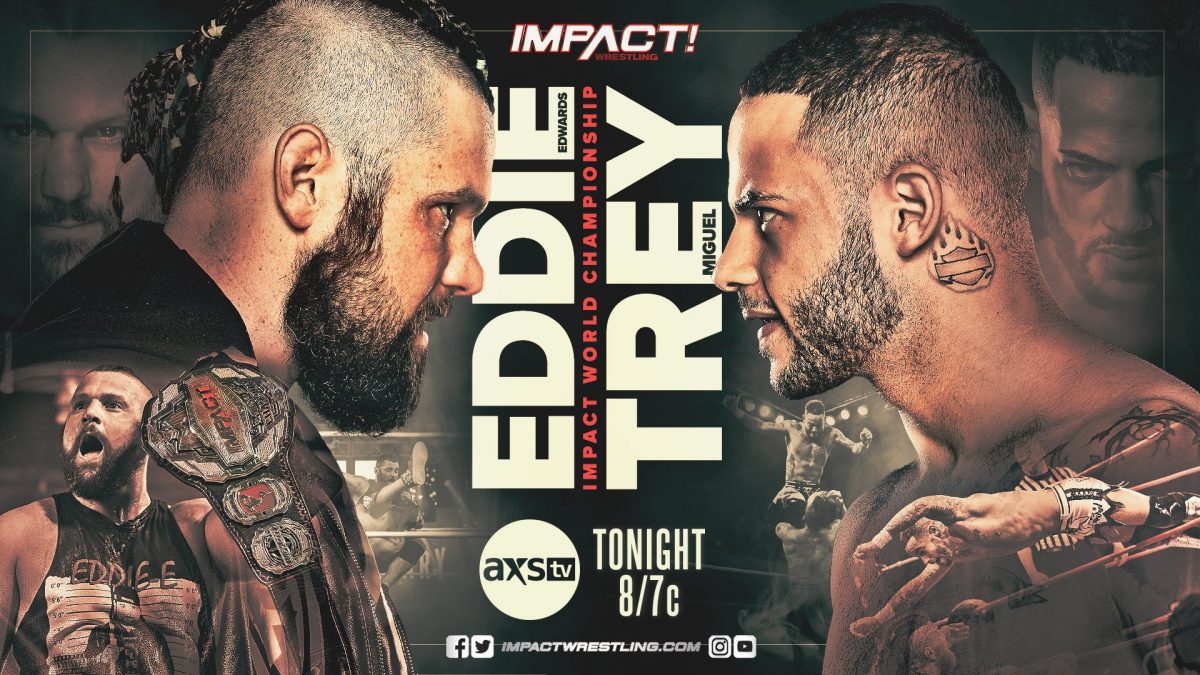 Eddie Edwards vowed to be a fighting champion and in order to achieve that, he will defend his World Title every week in an open challenge. The first competitor to answer the open challenge tonight is Trey Miguel. Eddie tosses Trey across the ring with an overhead belly-to-belly suplex. Trey quickens the pace as he hits Eddie with a step-up kick in the corner. Trey connects with a split-legged Moonsault, targeting the knee of Eddie. Trey hits a low springboard cutter for two. Eddie goes for the Tiger Driver but Trey reverses into a pinning predicament for another near fall. Eddie connects with the Boston Knee Party to score the pin and retain the IMPACT World Title.

After the match, Eric Young sends a message to Eddie Edwards from the ramp – he’s coming for the World Title.

We return to Wrestle House where Rosemary has invited several members of the IMPACT Wrestling locker room for a party. This comes after Taya Valkyrie spoiled her and John E Bravo’s alone time. Taya Valkryie wants no part of it but when she tries to walk out the front door, she’s stopped by a vision of the Monster, Abyss.

Tommy Dreamer is revealed as the owner and host of Wrestle House. Rosemary says the guests will remain here for as long as it takes – whatever that means. The Deaners and XXXL are in a heated argument after XXXL recently turned on them. Susie insists that they call a truce. Dreamer reveals that the winner of Wrestle House will receive one million dollars but Rosemary denies the truth of that statement.

Dreamer says that there are only six bedrooms in the house, prompting all the competitors to scramble in an attempt to claim a room. Acey Romero and Crazzy Steve both want to sleep in the ring outside which leads to a match.

Winner Gets to Sleep in the Ring – Kylie Rae as Referee
Acey Romero vs. Crazzy Steve

Steve insists that both he and Acey can share the ring but Acey wants it to himself. As both competitors become fatigued, Steve tries one last time. Acey outsmarts him and pretends to go for a handshake. As Steve comes closer, Acey hits a Sitout Full Nelson slam and locks in a choke hold to win.

Referee @IamKylieRae has laid down the law – the winner of @THEACEYROMERO vs. @steveofcrazzy gets to sleep in the ring! #IMPACTonAXSTV pic.twitter.com/dRBNepfD8N

Rohit Raju has a plan to make himself the partner of X-Division Champion, Chris Bey. Rohit approaches TJP and Fallah Bahh, who urge him to wear a mask and social distance. Rohit stirs up controversy between TJP and Bey, then tells Bey that it was all TJP’s doing. Rohit says that since TJP has Fallah to watch his back, he can be the one to watch the Ultimate Finesser’s back.

The Motor City Machine Guns are your new IMPACT Tag Team Champions after their huge victory over The North last week.

The North look back on losing the Tag Team Championships to the Motor City Machine Guns last week. Shockingly, Ethan Page is at a loss for words but Josh Alexander steps up and says they will regain their titles when they cash in their rematch clause.

Katie Forbes gives RVD a preview of the photos she’s set to reveal to the world later tonight.

EC3 reflects on his journey in professional wrestling. He says when he looks in the mirror, he sees failure, despite his championship reigns and multiple victories over Hall of Famers. EC3 says that in order to take back his power, he must destroy his past and control his narrative.

To move forward to the future, @therealec3 must destroy his past. #IMPACTonAXSTV pic.twitter.com/7RZ63GeLB0

Moose brags to Gia Miller about his impressive “title defense” against Fallah Bahh. Moose says that he’s going to put out another invitation for a TNA World Heavyweight Championship match but it will not be against EC3 who attacked him last week. Heath interrupts and says he’s allowed to be here because even though he’s not signed to IMPACT Wrestling, he is signed to TNA. Heath cons Moose into admitting that despite him being the self-proclaimed TNA World Heavyweight Champion, there is no TNA, rendering the belt meaningless. Moose realizes what he has done and gives Heath the invitation for a TNA World Heavyweight Championship match next week. Scott D’amore tells Heath that if he can beat Moose, he will earn a spot on the IMPACT roster.

.@HEATHXXII will face @TheMooseNation NEXT WEEK and if he wins he gets a spot on the IMPACT roster! #IMPACTonAXSTV pic.twitter.com/FfIUtbgPhu

This match came about after Deonna Purrazzo and #1 contender Kylie Rae were involved in a physical altercation last week. Kimber Lee tried to break things up and ended up on the receiving end of a sucker punch from Deonna. Lee is on fire from the opening bell, bringing the fight to the champ with a flurry of strikes. Deonna retreats outside the ring to catch a breather. Lee tries to wear down Deonna with a series of submissions but Deonna is a submission specialist and turns the match around. Lee connects with step-up Enzuigiri for two. Lee almost puts Deonna away with a powerful German suplex. Deonna cranks the arm and locks in the Fujiwara Armbar, forcing Lee to submit.

Post-match, former Knockouts Champion Jordynne Grace comes out with her arm in a sling, damage that was done by Deonna Purrazzo at Slammiversary. In a shocking turn of events, Jordynne tears off the sling and attacks Deonna, shoving her to the floor. Jordynne is coming to get her Knockouts Title back.

Johnny Swinger convinces Crazzy Steve to room with him after Steve was defeated by Acey Romero earlier tonight and lost the opportunity to sleep in the ring.

Meanwhile, Cousin Jake is snoring and Cody Deaner can’t sleep. Jake wakes himself up but thinks it was Cody’s snoring that did it. As the two argue over who was snoring, Tommy Dreamer announces that it’s “match time” where the loser will be forced to leave the bedroom.

Cody offers a truce but it turns out to be a trick as he quickly rolls him up for two. Cody continues to bend the rules and rakes the eyes of his own cousin. Jake connects with a running boot, then decides to Give’r with a strong forearm shot. Cody fights back with an Atomic Drop. Cody attempts the DDT but Jake counters into a huge swinging slam to win.

After the match, The Deaners call a truce now that their beef has been squashed. While looking for a new place to sleep, Cody stumbles into a luxury bus.

Sami Callihan approaches Ken Shamrock so they can discuss their Tag Team Championship loss to The North at Slammiversary. Shamrock is flustered and can’t think straight. Shamrock says he’s leaving and he’s not sure when he will return.

Katie Forbes tells RVD that Sami Callihan was creeping on her earlier tonight. RVD tells Callihan that he can look at Katie all he wants but he must keep his distance.

Katie Forbes and RVD are in the ring as Katie prepares to show the world photos from her website for free.99. Katie is glad that she’s not covering herself up anymore and now she can truly be herself again. After a countdown, we see the photos but it appears the ICU hacker, Sami Callihan, has put his face over all of them. Katie is furious and begins to thrown a tantrum after Callihan ruined her big reveal.

Dez and Wentz are hanging out in the Treehouse and Dez reveals that he invited Suicide to join them. Wentz isn’t happy that Dez continues to invite people to the Treehouse without asking him. One thing leads to another and Wentz ends up having a good time with the masked man.

Suicide seemed to have a real good time in the Rascalz’ Treehouse. #IMPACTonAXSTV @DezmondXavier @zachary_wentz pic.twitter.com/EYa8Um41sN

Josh Mathews and Madison Rayne conduct a video interview with Rich Swann after he was brutally attacked by Eric Young at Slammiversary, re-aggravating his knee injury in the process. Swann talks about how seven months of rehab and recovery were thrown out the window when Young snapped on him. Swann says that doctors are telling him all sorts of things and he’ll be in the IMPACT! Zone next week to elaborate.

A devastated @GottaGetSwann struggled to talk about the consequences of @TheEricYoung‘s BRUTAL attack at #Slammiversary.

Rich will be coming to IMPACT NEXT WEEK to address everybody. #IMPACTonAXSTV pic.twitter.com/alAcMV4Wf7

Reno Scum vs. The Good Brothers

The Good Brothers are in control in the early going, using their incredible double team offense to their advantage. Ace Austin appears and sits at the top of the ramp. The distraction allows Reno Scum to turn the tide as Thornstowe uses Luster’s head as battering ram. Reno Scum cut off the ring and wear Anderson down. Anderson gains momentum with a big Spinebuster to Thornstowe, allowing him to make the tag to Gallows. The Good Brothers connect with the Magic Killer on Thornstowe to win.

Ace Austin makes his way to ringside. Luster the Legend attempts to blindside The Good Brothers but they take him out. Madman Fulton appears out of nowhere and joins Ace in attacking Gallows and Anderson. They brawl up the ramp to the backstage area. The fight continues outside in the parking lot. Gallows hits Fulton with a big boot, causing him to collide with the cameraman and cut the feed. IMPACT! goes off the air.