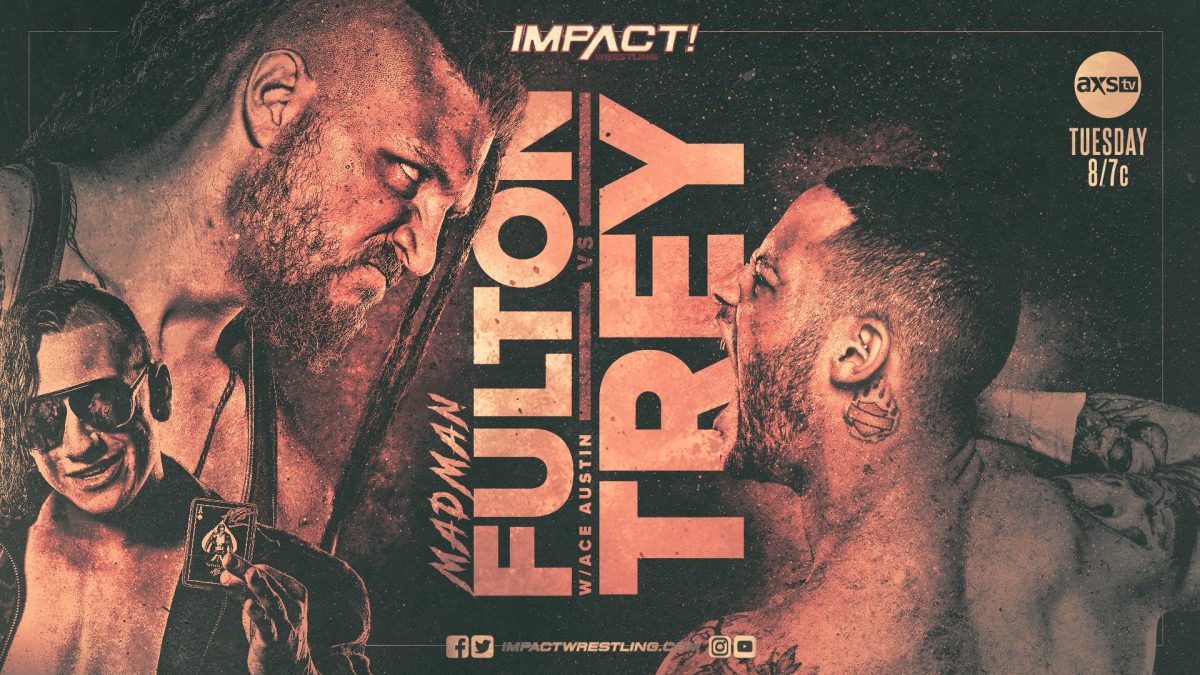 The IMPACT World Championship has been declared vacant but a brand new champion will be crowned on July 18th at #Slammiversary!

Chris Bey is looking to take out the masked man en route to his X-Division Title opportunity against Willie Mack at Slammiversary. The action is fast and furious in the early going as Bey traps Suicide in the ropes and hits him with a spinning kick. Bey attempts a Moonsault but Suicide avoids him and connects with a big running dropkick. Suicide launches himself off the top rope, taking out both Bey and Swinger with a trust fall to the floor. Bey fakes a knee injury, allowing Swinger to push Suicide off the top. Bey hits the springboard Famouser to win.

Gia Miller interviews self-proclaimed TNA World Heavyweight Champion Moose ahead of his defense against Crazzy Steve tonight. Moose says Steve will find out why he’s the legend known as Moose.

.@TheMooseNation plans to show @steveofcrazzy that he’s the best wrestler in the world TONIGHT! #IMPACTonAXSTV pic.twitter.com/5d6QYitbbq

After Johnny Swinger is caught bragging to Chris Bey about how easy the referees are to fool, referee Brandon Tolle tells them that he’s going to ensure Swinger is banned from ringside for Chris Bey’s X-Division Title match against Willie Mack at Slammiversary.

Reno Scum gain the early advantage by attacking TJP and Fallah during their entrance. TJP attempts a springboard kick on Luster but Thornstowe pulls his partner to safety. Reno Scum wear down TJP, preventing him from getting the tag to Fallah. TJP finally turns things around with a head scissors and tags in the big man. Thornstowe launches himself off the back of Luster, connecting with a double foot stomp on Fallah. The match breaks down as Reno Scum blatantly ignores the rules. Fallah hits Thornstowe with a Samoan Drop, followed by the Mamba Splash from TJP to win.

Madison suggests that Bravo’s love life is heating up between him and Rosemary. Bravo refuses to comment on the seriousness of the relationship, leading to Madison bringing in her next guest. It’s the most important woman in Bravo’s life, the Demon Assassin herself. Swinger notes that you can sense the sexual tension – not between Bravo and Rosemary but between him and the Demon Assassin. Bravo gets defensive and a fight almost breaks out. Taya Valkyrie interrupts and asks Rosemary if she’ll be her new tag team partner. Rosemary accepts and unfortunately, we’re out of time on Locker Room Talk.

Jordynne Grace will defend the Knockouts Championship against Deonna Purrazzo in a highly-anticipated match at Slammiversary.

It’s going to be a classic. #IMPACTonAXSTV pic.twitter.com/JthdZon0s5

After The North brutally attacked Ken Shamrock before his scheduled match with Josh Alexander last week, they explain that Shamrock has temper issues and no friends. Ethan Page says the World’s Most Dangerous Man is someone with a friend, like The North. Shamrock has heard enough and charges the ring. Sami Callihan interrupts and says who needs friends when you have an enemy. The lights go out and Callihan appears in the ring, fighting side by side with Shamrock. Are Callihan and Shamrock on the same page?

The North interrupt Scott D’Amore on the phone and complain about being attacked by Ken Shamrock and Sami Callihan just moments ago. D’Amore sarcastically shows sympathy and informs them that at Slammiversary, they will defend the Tag Team Championships against Shamrock and Callihan.

“Honestly a couple of good brothers like you will fit right in here.”

Jimmy Jacobs catches up with Trey who faces his mystery attacker Madman Fulton later tonight. We see a new side of Trey who is determined to get revenge on Fulton.

Before the match begins, Moose once again forces David Penzer to give a special introduction, this time calling him the best wrestler in the world. Moose swings Steve head first into the steel steps at ringside. Steve appears to be seriously injured after bleeding from the mouth. Steve begins to fight back but gets shut down with a big kick to the gut. Moose attempts a Superplex but Steve bites the face of Moose and counters into a Sunset Flip Powerbomb. Moose catches Steve in mid-air and follows up with a Fallaway Slam. Moose hits the Lights Out Spear to win.

After the match, Moose continues the attack on Steve until Tommy Dreamer makes the save. While Dreamer is checking on Steve, Moose kicks the hardcore legend in the side of the head. Dreamer recovers and gets on the mic. He praises Moose for his natural ability but says he’s in wrestling for the money. Dreamer says that just like in the NFL, Moose is a bust in pro wrestling and that’s why he awarded himself the TNA World Heavyweight Championship. Dreamer puts an exclamation mark on his statement by calling Moose a waste of talent.

Hernandez and The Deaners compete in an arm wrestling contest backstage. Hernandez dominates, winning a double or nothing bet.

Havok turns her back to Kiera and pays for it as Kiera dropkicks her into the corner. Kiera is on fire and has Havok on the ropes in the early going. Havok uses her strength advantage to toss Kiera across the ring. Tasha hooks the leg of Havok from ringside but Havok kicks her to the floor. Havok hits a series of vicious running boots in the corner. Tasha puts on Havok’s mask, enraging the Kaiju Queen. Tasha tosses the mask to Kiera who hits Havok over the head with it. Kiera connects with multiple Superkicks to win.

Backstage, Moose is furious about what Tommy Dreamer said about him earlier tonight. Moose accuses Dreamer of defamation and threatens to sue both him and IMPACT Wrestling unless he publicly apologizes.

Madman Fulton continues to wear down Ace Austin’s World Championship opponents before Slammiversary. Trey is out for revenge as he dives through the ropes, taking out Ace on the floor. Trey attempts another dive but Fulton catches him and tosses the Rascal back into the ring. Fulton shows off his freakish strength as he lifts Trey above his head with one arm, then slams him into the mat. Trey tries to get the monster off his feet with a Sleeper. Fulton fights back with a Sidewalk Slam but it’s not enough for Trey to break the hold. Trey soars through the air and hits a Neckbreaker. Fulton is about to put Trey away when Trey clobbers him with Ace Austin’s baton, causing the disqualification.

Trey continues his attack as he delivers repeated shots with a steel chair to both Fulton and Ace.

We see a video package hinting at the return of a former “super” star. IMPACT! goes off the air.

#Slammiversary is going to be SUPER! #IMPACTonAXSTV pic.twitter.com/P2U09r00VT