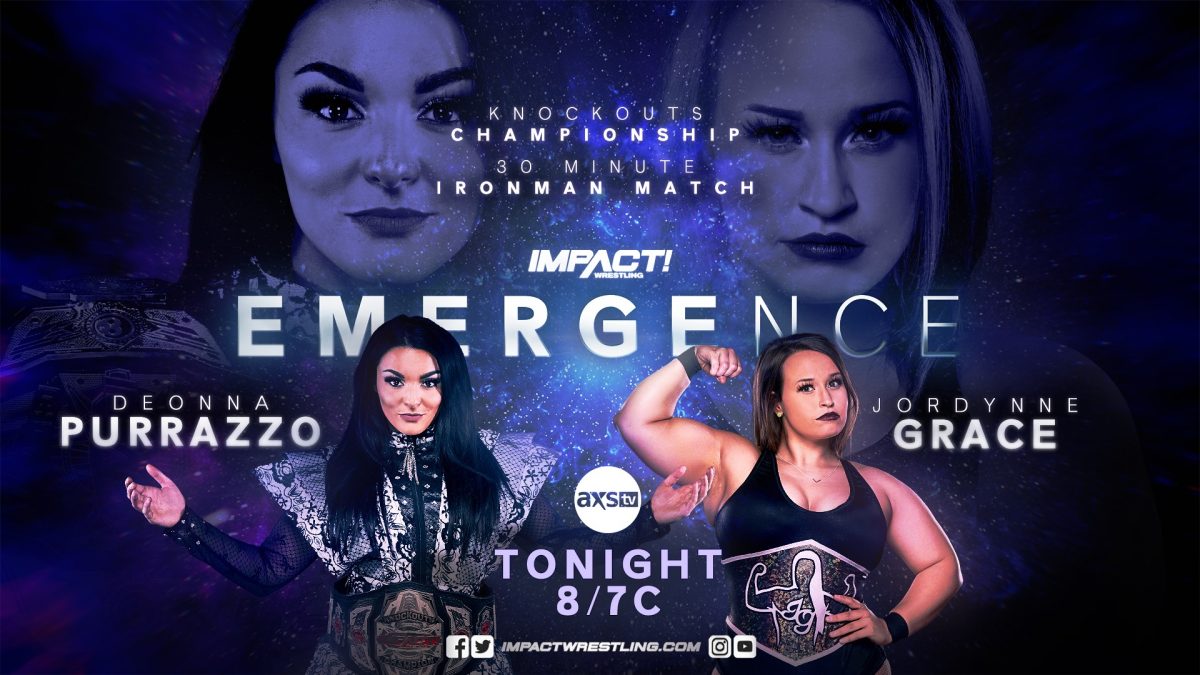 Eddie Edwards kicks off Emergence Night 2 with another World Title open challenge and it’s answered by none other than Rob Van Dam.

Eddie interrupts a kiss between RVD and Katie Forbes when he takes out Van Dam with a dive on the floor. Katie distracts Eddie, allowing RVD to drive him into the steel ring post. RVD drapes Eddie over the guardrail, then connects with a spinning kick from the apron. Now it’s RVD who distracts the referee as Katie delivers a kick to Eddie on the ropes. Eddie builds momentum with a Tiger Driver for two. RVD attempts the Frog Splash but Eddie avoids it, then hits the Boston Knee Party to win.

After the match, Eric Young blindsides Eddie Edwards from behind and announces that next week, he’ll be answering Eddie Edward’s World Title open challenge.

The cast of Wrestle House is preparing for a toga party. Things haven’t been going well for Taya Valkyrie and as a result, she has a bit too much to drink. Meanwhile, Johnny Swinger has an idea for him and Crazzy Steve to score all the ladies but when it doesn’t go according to plan, Tommy Dreamer announces that it’s “match time!”. Since Steve is blind, Swinger will have to be blindfolded.

Swinger looks for the other house guests’ help in finding Steve while he’s blindfolded but they lead him in the wrong direction. After Swinger goes crashing into the turnbuckle, Steve rolls him up for three.

Eddie Edwards is on the hunt for Eric Young in the backstage area.

This world doesn’t belong to them, it belongs to us. Don’t miss Bound for Glory LIVE Saturday, October 24th on pay-per-view.

This world doesn’t belong to them, it belongs to us.

Our biggest PPV of the year – Bound For Glory – is coming Saturday October 24th LIVE on PPV! #BFG2020 @TheEricYoung pic.twitter.com/MnsSSOFGiP

Rhino tells fans to get #Heath4IMPACT trending on social media so that management will allow Heath to join him for tag team action against Reno Scum next week.

.@Rhyno313 needs YOU to tweet #Heath4IMPACT so he’ll have a partner against Reno Scum NEXT WEEK! #Emergence #IMPACTonAXSTV @HEATHXXII pic.twitter.com/8NlB05tMr7

Eddie Edwards is in the ring to grant Eric Young his World Title match but he doesn’t want to wait until next week. EY comes out and his plan is by design – for that reason, he won’t be fighting Eddie tonight. Without warning, Eddie charges him on the ramp and the brawl is on. Security and Scott D’Amore try to break things up as Eddie shoves the EVP to the ground.

Gia Miller catches up with new X-Division Champion Rohit Raju after he stole the title from Chris Bey and TJP in a three-way match last week. Rohit claims he’s going to give out what he never had – opportunity.

Madison Rayne hosts another exciting edition of Locker Room Talk with special guests, Dez and Wentz of the Rascalz. But what she didn’t tell them was that she has two more guests – the devious duo of Ace Austin and Madman Fulton. After the two teams almost get into a physical altercation, Madison wraps things up.

ICU hacker Sami Callihan lays out a challenge to RVD for a fight next week.

“Destroying this title is the only way I’ll be free.”

The destruction of the TNA World Heavyweight Championship is the only way @therealec3 can leave the past behind. #Emergence pic.twitter.com/b8bjNgt3hO

Willie overwhelms Myers with his agility in the early going. Myers takes him down as they jockey for position in the ropes. Myers almost pulls Willie’s arm out of the socket to gain control. Myers begins to wear down his opponent. Willie turns the tide with a Sky High sit-down powerbomb. Willie builds momentum with a swinging body slam, followed by a leg drop. Myers hits a top rope elbow drop for two. Myers rolls up Willie with a handful of tights to steal the victory.

Heath wants you to get #Heath4IMPACT trending so that IMPACT management will allow him to team with Rhino against Reno Scum next week.

Reply to this with #Heath4IMPACT and show the WORLD that Heath should team with @Rhyno313 next week. #Emergence #IMPACTonAXSTV @HEATHXXII pic.twitter.com/54kx9iNTSX

Back at Wrestle House, it’s time for Rosemary’s date with Lawrence D. Alisha confronts her about it, stating that it’s wrong to try and make John E Bravo jealous. Tommy Dreamer inspires Bravo to man up. He interrupts their date, leading to a match.

Lawrence makes quick work of Bravo with two of his signature knockout punches.

Post-match, Bravo and Rosemary admit that they have feelings for each other. Bravo breaks the news to Taya Valkyrie who isn’t happy about the situation. Taya accuses Rosemary of being jealous of her. Taya challenges Rosemary to a match next week where the winner takes all – including Bravo.

Deonna stomps on the hand and shoulder of Grace as she targets those areas in the early going. Deonna hits a series of short-arm clotheslines for two. Deonna is in firm control as she tosses Jordynne to the floor. The score remains 0-0 halfway through the match. Deonna does more damage to the hand as she drives it into the steel steps with her foot. Grace creates separation with a suplex off the second rope. Grace builds momentum with a series of sentons for a near fall. Grace puts Deonna to sleep to score the first fall with mere minutes left in the match.

When the action restarts, Deonna floats over into a submission of her own but Grace gets to the ropes. Grace charges into the corner but Deonna uses referee Brandon Tolle as a shield. Grace hits the Grace Driver but there’s no referee. Deonna clobbers Grace with the Knockouts Title to tie things up with just over one minute to go.

Deonna connects with a German suplex, then locks in the Fujiwara Armbar. Jordynne Grace taps out just seconds before the clock expires. Deonna Purrazzo retains the Knockouts Championship by a score of 2-1.