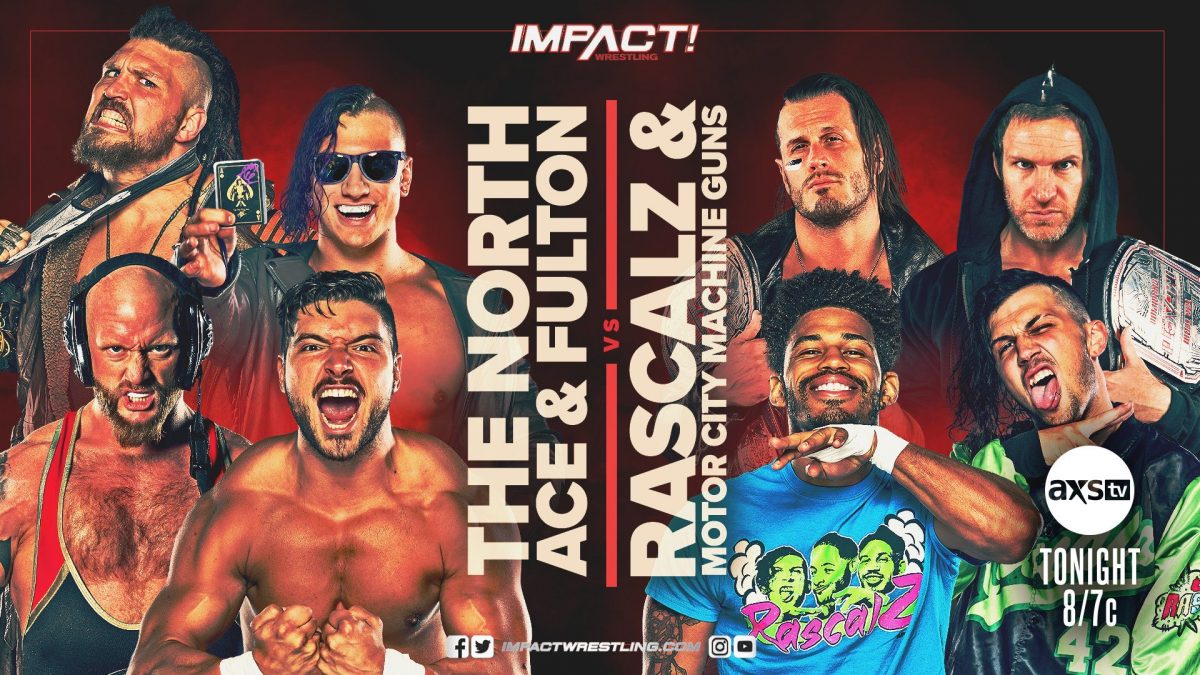 Tonight’s show is dedicated to the memory of Barry Scott. RIP.

Tonight’s IMPACT is dedicated to the memory of Barry Scott. RIP. pic.twitter.com/I3Wy2Fv6yu

Knockouts Champion and #1 contender square off in tag team action here as Deonna and Kylie start the match. Deonna strikes Susie from the apron, allowing Lee to gain control with a clothesline. Deonna and Lee work well together as they continue to wear Susie down. Susie creates separation with an atomic drop, then makes the hot tag to Kylie. Lee connects with a German suplex on Kylie but it sends her right into the corner where Susie tags herself in. Susie hits Lee with the Aracnarana. Susie connects with Su Yung’s finisher, the Panic Switch, on Lee to win.

After the match, we see signs that Su Yung still lives within Susie.

Trey Miguel wants a shot at Rohit Raju’s X-Division Championship but the champ tells him that TJP is next in line.

Kiera Hogan and Tasha Steelz confront John E Bravo about who his best man is for his wedding with Rosemary. As Fallah Bahh is coming out of the locker room, Bravo grabs him and makes him the best man to get Kiera and Tasha off his back.

From Wrestle House to the IMPACT Zone, this tag team feud continues. Larry connects with a strong forearm to Cody before Acey pummels him in the corner with a series of chops. Cody avoids the Best Hand in the House from Larry and makes the tag. Cousin Jake shows off his incredible strength with a swinging slam to Larry. Acey sends Cody flying out of the ring with a huge Pounce. Larry knocks out Jake with his devastating right hand to win.

According to Rohit Raju, TJP is next in line for an X-Division Title shot. However, what management doesn’t realize is that all Rohit is doing is prolonging the time before he has to defend his championship. Trey wants the next opportunity and a win here may give him just that. The action is fast and furious from the opening bell. TJP connects with a dropkick but Trey turns it around with a Cheeky Nandos Kick. Trey sends TJP to the floor with a Hurricanrana, followed by a dive. TJP locks in the ankle lock but Trey gets to the bottom rope. Trey picks up the win with impressive double knees off the top.

Dr. Ross tells the Guns that Dez and Wentz will be unable to compete tonight. The Good Brothers step up to the plate and will be their partners instead.

The Motor City Machine Guns and Gallows will unite in our main event.

After his vengeful attack on Eric Young last week, Rich Swann is in the ring. He calls out Executive Vice President Scott D’Amore and says that even though this conversation was supposed to happen in the office, he would rather do it in the ring. Swann tells D’Amore that he wants to fight Eric Young, despite his potential career-ending injuries. D’Amore reminds him that he’s not medically cleared – but Swann says he will be ready by October 24th at Bound for Glory. Swann reminds him that he has been the only one to pin Eric Young since he made his return, making him worthy of a World Title shot. Swann tells D’Amore to put himself in his shoes. D’Amore is about to respond when Eric Young charges the ring and shoves him to the mat. Swann attacks EY, sending him retreating up the ramp. D’Amore gets on the mic and grants Swann what he wants – a World Title match with Eric Young at Bound for Glory.

Taya Valkyrie asks Rosemary to be at ringside for her match against Kiera Hogan later tonight. Rosemary wants Taya to help her resurrect the officiant for her demon wedding with John E Bravo but Taya is… busy.

This rivalry continues as Willie looks to get back in the win column after falling to 0-2 to Myers. The fight spills to the outside in the early going as Myers hits a side legsweep on the ramp. Myers exposes the steel turnbuckle but Willie fights him off before he can use it as a weapon. Willie begins to build momentum with a back suplex. Willie hits his signature leg drop for two. Myers connects with a Pele, followed by a sitdown slam for his own near fall. Myers charges into the corner but Willie sidesteps him, causing him to collide with the turnbuckle that he exposed. Willie hits the Stunner to score the victory.

Rosemary wants Havok’s help in reviving Father James Mitchell after she murdered him in the Undead Realm so that he can officiate her wedding. Havok is furious by the request and attacks the Demon Assassin.

.@WeAreRosemary needs either a virgin sacrifice or the consensual cooperation of the murderer to complete a resurrection. #IMPACTonAXSTV @FearHavok @nevaehOi4k pic.twitter.com/aRzZ9cDJVQ

Scott D’Amore tells Moose that he’s making up everything in his head when it comes to the mind games being played by EC3. As soon as D’Amore walks away, EC3 sends him another message.

Moose makes a phone call to the demo god and asks him how he handled the situation when his title was stolen from him. Moose thanks him for his advice and says that next time, the bubbly is on him.

“@TheMooseNation the longer you wait the closer I get to going full-tilt John Doe psycho boy on this title.” @therealec3 says @TheMooseNation is running out of time. #IMPACTonAXSTV pic.twitter.com/al59GJkuEO

Moose looked for advice from the one person who has experience with their World Championship being stolen. #IMPACTonAXSTV @IAmJericho pic.twitter.com/BcNjvWXopM

Rhino sneaks Heath into the building to execute a plan that will earn Heath some money for his #Heath4IMPACT campaign.

Kaleb with a K is conducting a photo shoot with Tenille Dashwood. Jordynne Grace interrupts and tells her that next week, she actually has to show up for in-ring competition because they have a scheduled singles match.

.@TenilleDashwood and @JordynneGrace appear to have very different definitions of working.

Rosemary doesn’t accompany Taya to ringside after she was brutally attacked by Havok just moments ago. Taya hits a back elbow, followed a double foot stomp. Kiera turns the tide with a running boot in the corner. Taya drives Kiera into the corner turnbuckle, as she topples to the floor. Tasha rakes the eyes of Taya behind the referees back, allowing Kiera to capitalize with a swinging fisherman’s suplex to win.

Rhino challenges Hernandez to an arm wrestling contest but it’s just a distraction so that Heath can sneak in and steal his roll of cash.

.@HEATHXXII is a master of stealth. #IMPACTonAXSTV @Rhyno313 @SuperMexCTM pic.twitter.com/tlJXBgTQpR

Chris Bey, TJP and Trey Miguel all argue with Rohit Raju over who is next in line for an X-Division Title opportunity. As Rohit continues to play his games, he tells them to take it up with management. Trey Miguel suggests a three-way match with the winner becoming the definitive #1 contender. Rohit begrudgingly agrees and gives them his word.

Page assists Alexander with a hanging DDT to Shelley. Fulton hits a Northern Lights suplex on Shelley after he attempted to make the tag where Sabin was reaching and the Good Brothers noticeably were not. Shelley is getting beat down as his opponents cut off the ring and prevent him from making a tag. Sabin has seen enough and delivers a kick to Ace, allowing Shelley to hit a back suplex and tag Anderson. Page gets sent for a ride with a huge spinebuster from Anderson. Gallows big boots Fulton off the apron. The Good Brothers attempt the Magic Killer on Page but Alexander breaks it up. Sabin takes out The North with a top rope crossbody as the match turns to chaos. The action is absolutely insane with momentum shifting by the second. The North do the damage to Shelley but Ace tags himself in and steals the pin to win.