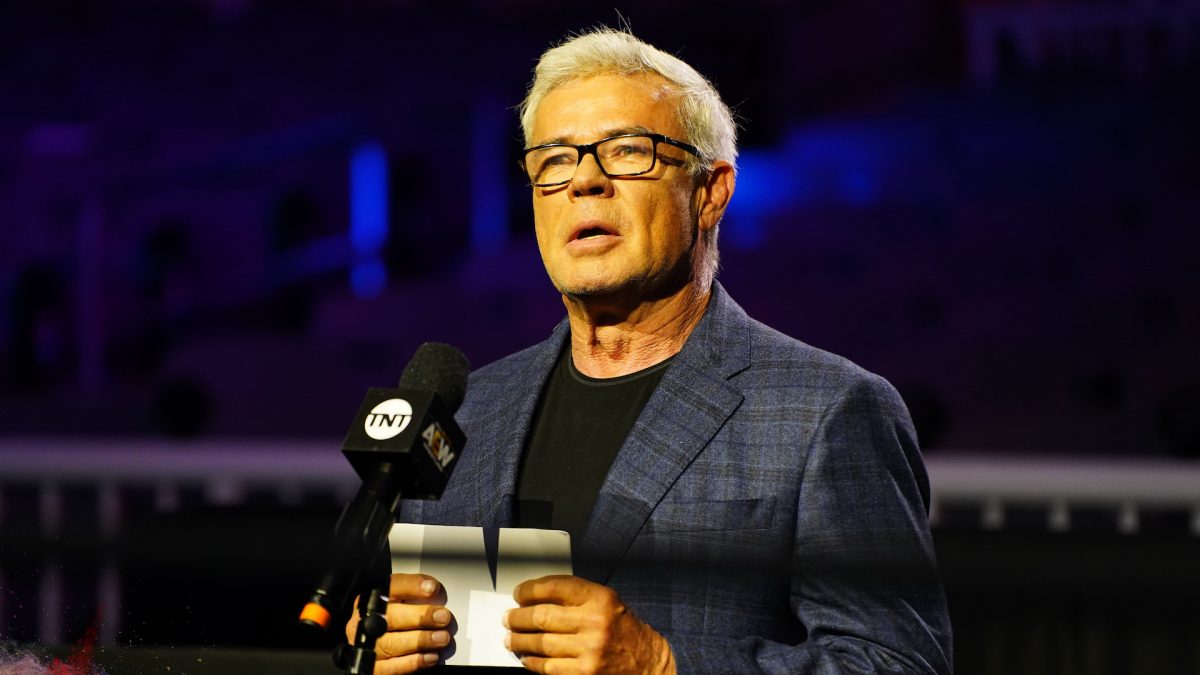 During a recent episode of the After 83 Weeks with Christy Olson podcast Eric Bischoff revealed that he changed the verbiage of his originally scripted segment to make it better due to the creative freedom allowed in AEW. Bischoff also stated that he did not inform MJF beforehand of the changes made and praised him for reacting very well when faced with a sudden unplanned situation.

“It was a town hall that had the political kind of vibe to it, and I wanted to try to come up with a way for my dialogue to be kind of consistent with what the scene was. I took what had been prepared for me in the notes [and] I went, ‘Oh yeah. But if I changed it up this way, it won’t change the meaning of anything. It does the exact same thing. It just kind of makes it feel more tuned-in politically, based on the theme of that segment.’ So I went to Chris and I said, ‘hey, Chris, I got an idea.’ He goes, ‘Yeah, go ahead. That’s what you’re here for. Make it your own.’ I went ‘wow, that’s fucking cool.’ That’s the way I like to work. Now, you start thinking. Now the creativity part of your brain starts firing. So I went back and polished it up a little bit in my own head and I went out and I did it.

It wasn’t until last night when I watched it, did I realize that I smartened up Chris, but I didn’t smarten up MJF. He had no idea that question was coming the way I posed it.

He just hit that thing like a two-hundred pound softball, just splattered it, didn’t miss a beat… Everybody knows he’s a very talented guy and certainly he knows it. But I was so impressed with the way he didn’t even blink when I changed up the dialogue that he was expecting. That was really cool.”

Last night live on the @83Weeks channel “Eric B. from Cody, Wyoming” revealed how his #AEWDynamite segment with @IAmJericho & @The_MJF went down…

Limited tickets for AEW’s Full Gear 2020 event were put on sale this past Friday by the company. Dave Meltzer reported in this week’s Wrestling Observer Newsletter that AEW officials recently expanded the seating capacity at Daily’s Place to 925 for their upcoming event, which is still below the limit for live attendance under the company’s current coronavirus precautionary policy.

TNT reportedly will be airing a new AEW special called “Road to Full Gear” on their network on November 6th starting at 11PM EST, according to PWInsider. This special will air the day prior to AEW’s Full Gear 2020 event on November 7th.

AEW Files Several New Trademarks Including One for Video Games

A trademark for “AEW Games” was filed on October 23rd for video gaming-related purposes.

A trademark for “All Elite Wrestling AEW Best Summer Ever” was filed on October 26th for wrestling and entertainment-related purposes.