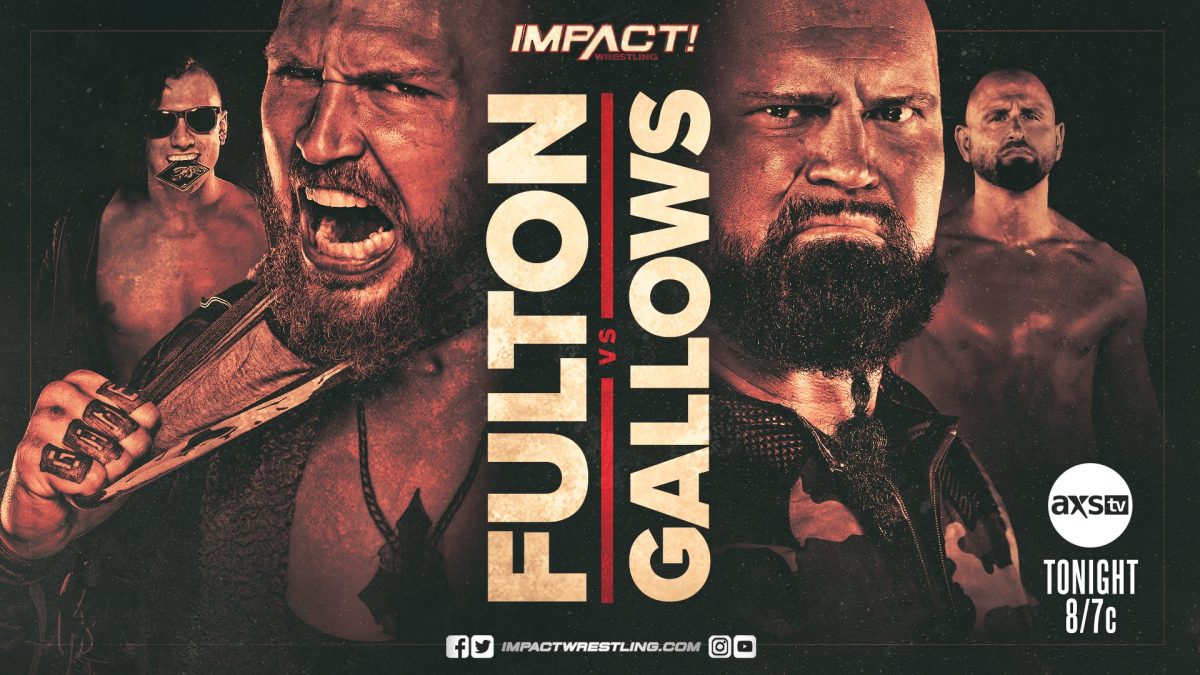 Moose is seen pleading with Scott D’Amore to call off his Bound For Glory match against EC3 that will take place in an undisclosed location. Scott believes that Moose is delusional and defers to the situation with Rich Swann, as he awaits a call from Swann’s orthopedic specialist to see if he will be cleared to compete at Bound For Glory.

Meanwhile, Moose storms off and the mind games from EC3 continue. EC3 reveals that he didn’t throw the TNA World Heavyweight Championship off a bridge last week as it originally appeared. EC3 tells Moose to meet him there and he will find what he seeks.

.@TheMooseNation now knows where he needs to go on the hunt for @therealec3 and the TNA World Heavyweight Championship. #IMPACTonAXSTV pic.twitter.com/HSSV5Xqju6

After being involved in each other’s business for weeks, these three teams compete in what is sure to be a chaotic three-way Knockouts tag. Two competitors are legal at any given time and anyone can tag in anyone. Kiera and Tasha talk trash from ringside as Havok pummels Taya in the corner. Tasha waits until the damage has been done before tagging in to deliver a follow-up dropkick. Nevaeh plants Tasha to the mat before making a tag to the terrifying Havok. The Kaiju Queen goes on the attack but as she hits the ropes, Rosemary tags herself in. Rosemary catches Tasha in mid-air for a Fallaway Slam. Kiera takes out Havok with a dive to the floor. Taya is next to fly as she launches herself off top rope all the way to the ramp. Rosemary puts Tasha away with a double underhook to score the victory.

Last week, Fallah Bahh was able to steal a roll of cash from Hernandez in order to fund John E Bravo’s wedding. However, Fallah informs the party that he wasn’t able to secure anything. Crazzy Steve has his suspicions and the tension leads to Fallah challenging Steve to a match later tonight.

.@steveofcrazzy is wondering if @FALLAH1 has anything to get off his chest. Like a large stack of money for example. #IMPACTonAXSTV pic.twitter.com/tYpsqkLR48

Havok tells Rosemary that the only way she’ll help her revive Father James Mitchell is if she can beat her in a match next week.

The stakes are high next week – if @WeAreRosemary can defeat @FearHavok then Havok will assist in the resurrection of Father James Mitchell. #IMPACTonAXSTV pic.twitter.com/pxkYhJwlBf

It appears as though Fallah is hiding the roll of cash in his shirt. Steve tries to pry it out but Fallah does everything in his power to stop him. Steve begins to wear Fallah down with an illegal submission on the ropes. Fallah catches Steve in mid-air but he fights out of it. Steve rips off Fallah’s shirt and reveals the roll of cash hanging around his neck. Steve rolls him up to pick up the win.

Rhino informs Heath that he pulled some strings in order to get them both a spot in the Call Your Shot Gauntlet at Bound For Glory. If one of them wins, Heath gets his contract with IMPACT Wrestling. But if they lose, Heath must leave IMPACT once and for all. After Heath walks off, Scott D’Amore lets us in on another stipulation that Rhino purposely didn’t tell Heath – Rhino’s contract is also on the line.

The stakes are insanely high at #BFG2020 – if either @HEATHXXII or @Rhyno313 win the Call Your Shot Gauntlet, Heath gets his IMPACT contract.

But if they lose, BOTH OF THEM are gone from IMPACT. #IMPACTonAXSTV @ScottDAmore pic.twitter.com/stvkSktsTo

The winning team in this huge 10 person tag will face off in a five-way match next week on IMPACT! where the victor will enter the Call Your Shot Gauntlet in the coveted #20 spot at Bound For Glory. These are some unique teams – not only are The Deaners on opposite sides but rivals Tommy Dreamer and Brian Myers must also coexist. Dreamer hits the ropes but Hernandez catches him in the back with a knee, allowing Jake to gain control. Hernandez locks in a bear hug on Dreamer but the innovator of violence bites him to escape. Heath picks up the pace with a big neckbreaker to Myers. Heath connects with the Wake Up Call on Swinger to pick up the win for his team.

Eddie Edwards attacks Sami Callihan in the backstage area but Eddie falls victim to the numbers game when an enraged Ken Shamrock turns the tide.

World Champion Eric Young tells Jimmy Jacobs that he’s certain Rich Swann will not be cleared to compete at Bound For Glory and he’s going out to the ring tonight in order to get to the bottom of it.

Kylie hits a tilt-a-whirl head scissors in the early going. Kylie continues her momentum with a spin kick for two. Kylie attempts a Hurricanrana but Lee catches her and delivers a sick powerbomb on the apron. Kylie hits a springboard arm-drag but Lee creates separation by retreating to the ropes. Lee drives her into the corner turnbuckle, followed by a delayed vertical suplex for a near fall. Kylie builds momentum with the Kylie Special for a near fall of her own. The action is back-and-forth as Deonna gets up on the apron. Kylie doesn’t fall for the distraction, locking in Smile to the Finish to win by submission.

After the bell, Kylie won’t break the hold. Deonna attacks her from behind but Kylie fights back with a superkick. Kylie stands tall as the champ retreats up the ramp.

These two giants collide as they look to build momentum ahead of the four-way Tag Team Championship match also featuring the Motor City Machine Guns and The North at BFG. Fulton goes snake-eyes in the opening moments of the match, then clotheslines Gallows over the top rope to the floor. The fight spills to the outside as these two giants brawl towards the stage. The referee calls for the bell as the match ends in double countout.

Back from the break, Josh Mathews announces that IMPACT management has restarted the match and it is now no disqualifications and no countouts.

No Disqualifications, No Countouts
Doc Gallows vs. Madman Fulton

Fulton assaults Gallows with a lead pipe at ringside. Gallows fights back as he drives a steel chair into the gut of the Madman. Gallows launches himself off the top with a steel chair but Fulton drives it into his skull with a big boot. Fulton charges into the corner as Gallows sidesteps, causing a head-on collision with another chair. Gallows chokeslams Fulton through two steel chairs to win.

World Champion Eric Young is in the ring to demand answers – will he defend the World Title against Rich Swann in just 11 days at Bound For Glory? Young takes the show hostage as he refuses to leave the ring. We see Scott D’Amore in the backstage area and he receives a phone call before heading out to the ring. D’Amore informs him that he did additional and substantial damage to Swann during his attack last week – but Swann is a special athlete. D’Amore goes on to say that Swann’s orthopedic specialist has indeed cleared Swann to compete at the biggest event of the year. Furious by the news, Young begins to brutally attack the Executive Vice President until Rich Swann makes the save. Swann sends Young retreating up the ramp with a handspring cutter before standing tall in the middle of the ring.

The search may finally be over for Moose as he meets EC3 at the bridge where the funeral for the TNA World Heavyweight Championship was held. They stare each other down and after a war of words, the fight is on. EC3 makes quick work of the self-proclaimed champ and laughs in his face. EC3 begins to leave with the title but Moose isn’t finished yet. Moose pummels EC3 with a series of closed fists, busting him open in the process. Moose finally reclaims the TNA World Heavyweight Championship as EC3 looks on, battered and bruised.