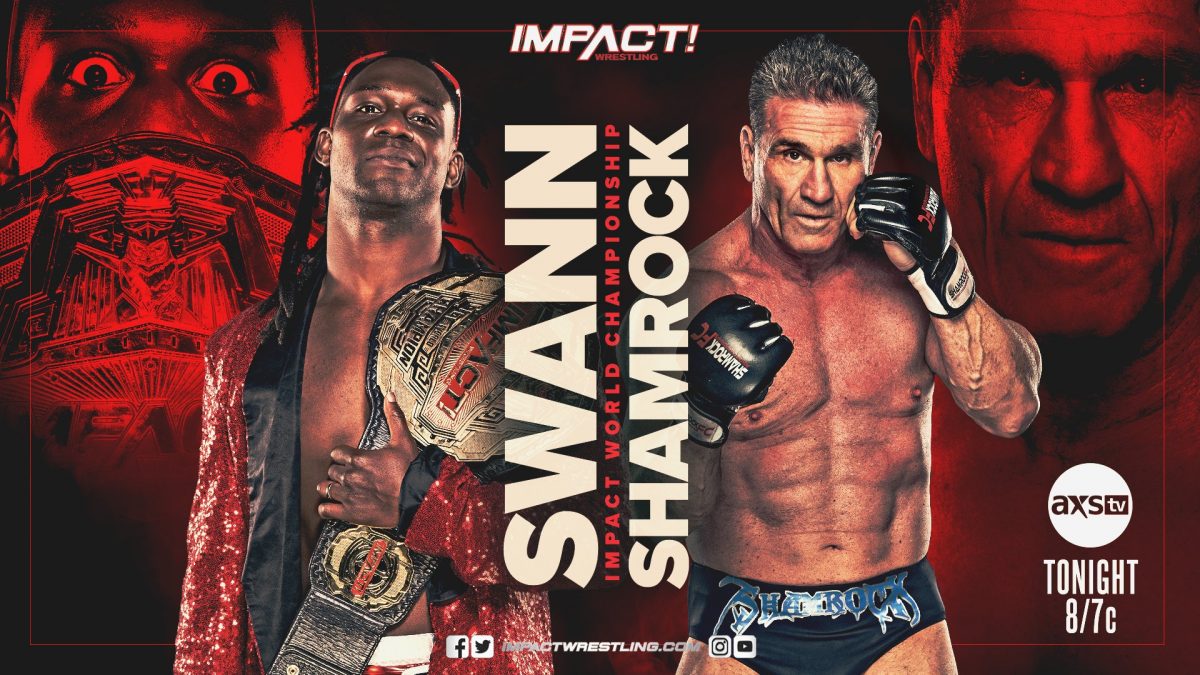 Dr Forman informs Scott D’Amore that John E Bravo is in stable condition after being shot at his wedding last month. However, if he does make a recovery, he may not be the same John E Bravo that we know and love. Later tonight, justice will be served when prime suspect Johnny Swinger goes to Wrestler’s Court!

The Sea Stars make their IMPACT Wrestling debut as the Knockouts Tag Team Title Tournament continues! Delmi has Kiera on the retreat, attempting numerous pins in the early going. Delmi hits Kiera with a neckbreaker for two. Kiera dropkicks Ashley in the corner. The Sea Stars build momentum as Delmi uses her height advantage to deliver a series of strikes. Delmi sends Kiera crashing into her own partner for a near fall! Tasha attacks Ashley on the outside before taking out Delmi with a running bulldog. Kiera scores the victory with a swinging neckbreaker to Delmi, securing their spot in the next round of the tournament!

Jordynne Grace reveals that her partner in the Knockouts Tag Title Tournament is none other than pro wrestling veteran, Jazz!

Ethan Page tells Josh Alexander that he took out Doc Gallows. Page thinks he’s a genius but Alexander lets him in on the consequences of his actions – if Gallows is out for 4 to 6 weeks, they can’t challenge for the Tag Team Championships that the Good Brothers currently hold! Page ensures Alexander that they’re going to take care of it, but Alexander isn’t so confident.

Madison Rayne represents Johnny Swinger after he was accused of murdering John E Bravo. Detective Dreamer made him suspect #1 when The Deaners discovered a gun in his fanny pack at Turning Point. D’Lo Brown is the judge and court is in session. Madison claims that this crime was committed by a mastermind, something that Swinger is not. Fallah Bahh, Cody Deaner and Acey Romero all give their testimonies. Acey notes that after doing a fingerprint analysis, he did in fact find Swinger’s fingerprints on the gun. The problem is that he also found countless other fingerprints, including those of Tommy Dreamer himself. Wrestler’s Court continues!

There is no underhanded advantage @swinger_johnny won’t look for in this trial. #IMPACTonAXSTV @MadisonRayne pic.twitter.com/cfdC1qR16s

Suicide answers the Defeat Rohit Challenge for a shot at the X-Division Championship but Rohit claims that someone undeserving of a title shot is underneath his mask. Rohit makes it a non-title match which Suicide agrees to. Rohit takes control by sending his opponent over the top rope to the floor. Rohit wears him down as he obsesses over removing the mask. On commentary, Matt Striker suggests that TJP may be under Suicide’s mask considering that he’s ineligible for an X-Division Title shot. Rohit finally rips off the mask but as he does, TJP appears on the ramp! Crazzy Steve reveals himself as the man behind Suicide’s mask and rolls up Rohit for three!

Backstage, Sami Callihan pumps up Ken Shamrock for his World Title match against Rich Swann later tonight. Moose interrupts and says he wishes it was him who had the opportunity to hurt Swann in the main event. Moose reminds Shamrock of when he defeated him at Bound For Glory 2019, sending the World’s Most Dangerous Man into a frenzy.

Alisha wants to continue teaming with Tenille Dashwood, despite them losing in the Knockouts Tag Team Title Tournament last week. After Alisha’s persistence, Tenille agrees seemingly to in an attempt for her to leave.

Killer Kelly and Renee Michelle prepare to compete in the Knockouts Tag Team Title Tournament but first, Kelly faces IMPACT mainstay Kimber Lee. Meanwhile, Lee seems preoccupied after Su Yung sent her a terrifying message last week. Kelly traps the arms of Lee before delivering a double underhook slam. Kelly follows up with a running dropkick in the corner for two. Lee fights off her opponent, then connects with a tilt-a-whirl backbreaker! Lee hits the top rope Swanton to win.

After the match, Susie makes a chilling return before introducing her friend, the Undead Bride Su Yung! The former Knockouts Champion charges the ring and attacks both Lee and Purrazzo! As Su is about to lock in the Mandible Claw on Purrazzo, Lee pulls her to safety.

Gia Miller interviews the Motor City Machine Guns. Shelley reveals that his neck is fully healed and he’s ready for action! Sabin lays out their three step process which consists of coming after XXXL, The North and the reigning Tag Team Champions, The Good Brothers!

Chris Bey interrupts a conversation between World Champion Rich Swann and his friend Willie Mack. Bey insists that a match between him and Swann would be big money at the box office. Tensions are rising after Bey calls the champ a loser.

One half of the Tag Team Champions, Karl Anderson comes out to introduce Ethan Page’s “phenomenal” opponent. The familiar theme of a TNA veteran plays throughout the IMPACT! Zone but it’s not who we think it is – it’s AJ Swoggle!

If Page can pick up the victory, he will earn a future Tag Team Championship opportunity for The North. Alexander distracts Swoggle from the outside, allowing Page to take control with a big boot. Page continues the assault with a cocky elbow drop. It looks as though Page has the match won but instead of going for the pin, he decides to add insult to injury. Anderson takes out Alexander at ringside. Page turns his back to Swoggle and pays for it as he rolls him up for three!

Johnny Swinger continues to deny the allegations that he shot John E Bravo.

Detective Dreamer calls on Father James Mitchell and Rosemary for questioning. Dreamer asks Rosemary an important question – did she ever love John E Bravo? Rosemary admits that she never did. In fact, she agreed to marry him just so she could get her hands on his virgin blood which would make her all-powerful in the Undead Realm. In a shocking turn of events, Bravo returns and confronts both Rosemary and Dreamer. Bravo says as much as he hates Rosemary, she wasn’t the one who shot him.

Bravo says he could smell the person who shot him that night – Larry D! Dreamer hooks up Larry to the lie detector but senses no deception. Instead, Dreamer sprays him with ring rust cologne that causes him to transform into his alter ego, Lawrence D! The truth comes out when Lawrence admits that he was the one who shot Bravo after he was going to marry the woman of his dreams, Rosemary. Judge D’Lo Brown declares that Johnny Swinger is not guilty!

The wedding was a ploy for his virgin blood. #IMPACTonAXSTV pic.twitter.com/MuBc3cWch7

The match is quickly thrown out after Eric Young and Joe Doering hit the ring and go on the attack!

Doering eliminates Fallah with a modified Chokeslam while EY does the same to Daivari with a Piledriver. Rhino, who was taken out by Doering and EY last week, rushes the ring and tries to take them on but ultimately falls victim to the numbers game. This world doesn’t belong to us, it belongs to them.​

Brian Myers disrespects TJP, Crazzy Steve and AJ Swoggle, saying that this is not the IMPACT Wrestling he signed up for.

Knockouts Champion Deonna Purrazzo and Kimber Lee enlist the help of Father James Mitchell to turn their Su problem into more of a Susie problem. Mitchell agrees to help – for a price.

Callihan hooks the leg of Swann in the early going and the referee ejects him for his actions! Shamrock begins to pick Swann apart, laying in strikes with pinpoint accuracy. Shamrock stalks his opponent and locks in a series of submissions. Swann breaks the grip of Shamrock but the World’s Most Dangerous Man shuts down his momentum with a big boot. Swann finally gets the big man off his feet with multiple spinning wheel kicks. Swann follows up with Rolling Thunder for two. Swann soars through the air with huge top rope Frog Splash for another near fall. Shamrock locks in a choke but the champ reverses into a pin to score the victory!

After the match, Shamrock is furious and punches the referee. Callihan rejoins him in the ring and takes out Swann with a package piledriver. Callihan is looking to end Swann’s career with the Callihan Slugger when Eddie Edwards makes the save! Callihan and Shamrock turn their attention to Mr. AIP, and Callihan lays him out instead with a baseball bat shot. IMPACT Official D’Lo Brown confronts them but Shamrock knocks him out with a straight right. Executive Vice President Scott D’Amore comes out with security in an attempt to stop the madness. It’s total chaos at ringside as IMPACT! goes off the air.