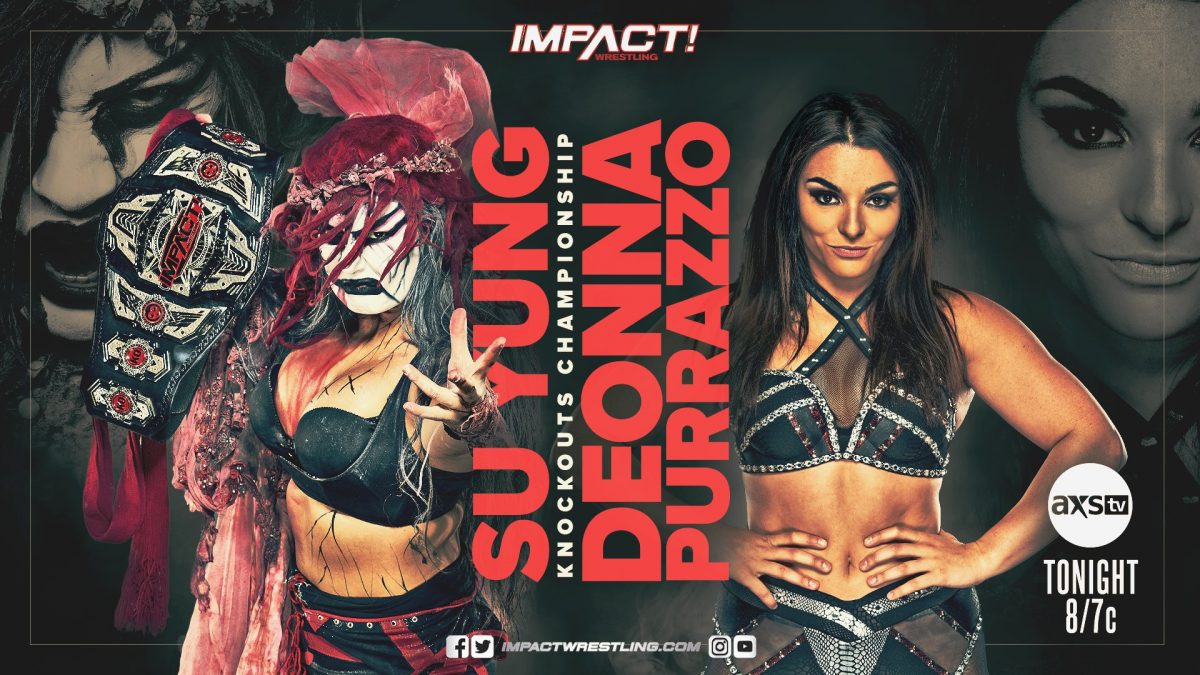 We kick off IMPACT! with a Bound For Glory Championship rematch as Su Yung defends the Knockouts Title against Deonna Purrazzo. The Virtuosa jumpstarts the match with a bicycle kick in the corner. Deonna targets the arm of Su as she prepares to lock in the Fujiwara Armbar. As Purrazzo is trapped in the Mandible Claw, Kimber Lee slides a steel chair into the ring. Both Knockouts play tug of war with Su gaining possession. Su uses the chair as a weapon and the referee calls for the bell!

After the match, Su continues the assault with the steel chair, sending Purrazzo and Lee retreating.

Heath meets with Scott D’Amore to sign his IMPACT Wrestling contract but it becomes apparent that Heath’s injury will prevent him from competing anytime in the immediate future. D’Amore says that everything Heath requested is in this contract – but he’ll have to wait until he’s healthy to sign it.

.@HEATHXXII‘s contract dreams will have to go on hold again because of his injury. #IMPACTonAXSTV @ScottDAmore pic.twitter.com/T596Ixd2vw

Barrister RD Evans confronts Scott D’Amore about Deonna Purrazzo’s Knockouts Title rematch ending in disqualification earlier tonight. Evans demands that D’Amore makes this right. D’Amore informs him that Purrazzo will indeed receive another shot at Su Yung – in the form of a No Disqualification Match at Turning Point on IMPACT Plus!

BREAKING: @realsuyung will defend the Knockouts Championship against @DeonnaPurrazzo in a NO DQ match on November 14th at #TurningPoint, exclusively on @IMPACTPlusApp!

Who will pick up the victory in this clash of X-Division stars? Trey is in control when Bey rakes his eyes, followed by a clothesline to the back. Trey builds momentum with a reverse 619. The pace quickens when Trey hits an impressive combination, culminating with a big neckbreaker for two! Bey blocks the Cheeky Nandos Kick in the corner. Bey flies off the top with a cutter to score the victory.

Johnny Swinger returns to co-host Locker Room Talk as Madison welcomes in her guests, Jordynne Grace and Tenille Dashwood. Both Knockouts are looking for a partner ahead of the Knockouts Tag Title tournament which begins in two weeks. Jordynne says that despite her partnership with Alisha not working out last week, she is confident she will find someone else in time. Jordynne admits that Tenille will do whatever it takes to win and proposes that they form a team. Tenille instead asks the former two-time Knockouts Tag Team Champion Madison Rayne to team up! Madison accepts as Jordynne looks on in frustration.

It seemed like @JordynneGrace was on the verge of suggesting a team with @TenilleDashwood but Tenille proposed a team with @MadisonRayne instead! #IMPACTonAXSTV pic.twitter.com/m9OEVjVXNc

Tommy Dreamer questions referee Brandon Tolle to see if he was the one who shot John E Bravo last week. Dreamer recalls when Bravo berated Tolle after a bad call in the match between Fallah Bahh and Johnny Swinger on IMPACT! Meanwhile, Swinger and Cody Deaner argue over who’s next in line to be questioned because they both have a match next – against each other!

Rohit Raju is in the ring awaiting his next challenger for the X-Division Championship. TJP comes out but the Defeat Rohit Challenge is only open to those who Rohit has not already defended against. Rohit claims that even though he may not have pinned TJP at Bound For Glory, he still lost in the Six-Way Scramble. TJP reflects on his incredible list of accomplishments in professional wrestling but it’s not enough to persuade Rohit to give him another shot at the title. TJP has had enough and spills his hot tea on the X-Division champion! A brawl breaks out with TJP gaining the upper-hand, sending Rohit retreating.

Backstage, Gia Miller interviews one half of the Motor City Machine Guns, Chris Sabin. Last week, XXXL made a statement when they took out his partner Alex Shelley with a blindside attack. Sabin says that every tag team in IMPACT Wrestling knows they can’t beat the Guns two-on-two and that was the reason for XXXL’s assault. Sabin challenges one member of XXXL to a fight next week!

.@SuperChrisSabin wants one half of XXXL NEXT WEEK! #IMPACTonAXSTV pic.twitter.com/zzdP7ce2mg

Scott D’Amore announces that Rohit Raju must defend the X-Division Title against TJP next week to determine who the better man is once and for all. This will be TJP’s last chance as long as Rohit is the reigning X-Division Champion.

Gallows is in total control from the opening bell as Page throws a tantrum at ringside. Alexander provides a distraction, allowing Page to gain the advantage. Page distracts the referee while Alexander gets physically involved. Page follows up with a DDT for two. Gallows fights back with a series of elbows, then quickens the pace with multiple clotheslines. Gallows sets up in the corner but Alexander hooks his leg. Anderson has seen enough and takes it to Alexander on the floor. Gallows hits a big boot for the three count!

After the match, The North attack Gallows but Anderson evens the odds and hits Page with the Gun Stun.

Gia Miller interviews Swoggle, who says he feels at home in IMPACT Wrestling. His former friend Brian Myers interrupts and calls him a sideshow attraction, not a professional wrestler. Myers rips Swoggle’s autobiography out of his hands and pushes him to the ground.

Two of the suspects in the shooting of John E Bravo compete in singles action tonight. Swinger calls for a timeout, prompting Deaner to pummel him with boots in the corner. Deaner takes a swig of beer but that gives Swinger the opening he needs as he sends him head-first into the turnbuckle. Deaner hits an inverted Atomic Drop and it’s time to Give’r! Deaner attempts the DDT but Swinger counters and retreats to the outside. Swinger grabs a steel chair but Jake stops him from using it. Instead, Swinger hits Deaner with a loaded fanny pack to steal the victory!

Self-proclaimed TNA World Heavyweight Champion Moose is in the ring. He reflects on his hard-fought victory over EC3 at Bound For Glory. Moose states that no matter what he’s been through over the last several months, people still look at Rich Swann as being the premier champion in IMPACT Wrestling. Last week, Moose sent a message to Swann when he attacked his friend Willie Mack in the parking lot. Moose warns Swann that pain is headed his way when Willie hits the ring and charges at the champ! Willie gets ahead of himself and bumps into the cameraman. This allows Moose to gain the advantage as he chokes Willie out with the camera cable.

Chris Bey congratulates Rich Swann on becoming the new World Champion at Bound For Glory. Bey tells Swann that it’s time for him to go to the management office and request a match against Bey with the title on the line. Swann tells The Ultimate Finesser that if he wants an opportunity, he needs to earn it.

.@THETOMMYDREAMER has narrowed the list of suspects down to 10. #IMPACTonAXSTV pic.twitter.com/l6zWkr2HBS

Both Eddie and Swann bring the aerial offense to their opponents in the early going. Back in the ring, Callihan begins to wear Eddie down. Eddie hits Callihan with the Blue Thunder Bomb to create separation. Callihan tags in EY who immediately knocks Swann off the apron, preventing Eddie from making the tag. Eddie hits EY with a huge superplex! Eddie fights free and finally makes the tag to Swann. The champ is on the attack as he picks Callihan off the top with a Hurricanrana. Swann takes out both EY and Callihan with a double handspring cutter! Swann locks in the Sharpshooter on Callihan while Eddie locks in the half Boston Crab on EY. Callihan is about to tap but EY stops his hand from hitting the mat!

Ken Shamrock comes down to ringside and sends Swann into the steel ring steps. Meanwhile, Callihan connects with a Piledriver on Eddie to win.