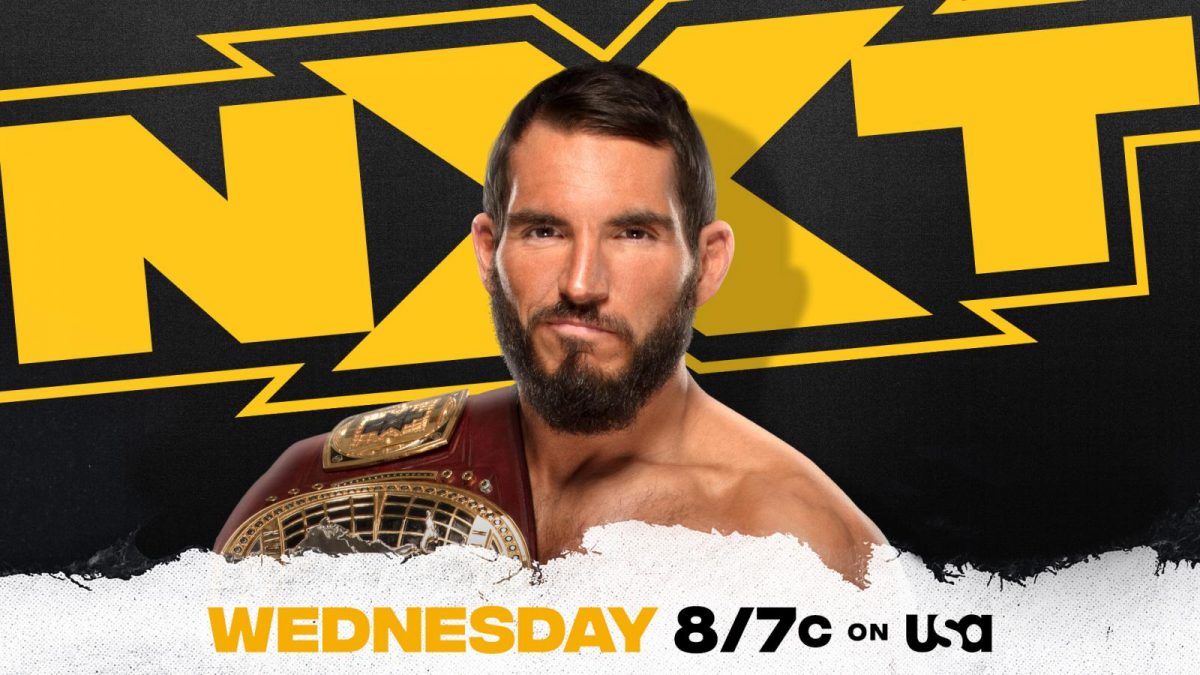 Report by Richard Trionfo of PWInsider.com

NXT North American Champion Johnny Gargano is in the ring and he welcomes everyone to his Wheel of Challengers. He says he made history when he became a Two Time North American Champion. Johnny says he lost his title in his first title defense. He won the NXT Title and then the title went bye-bye. He says he is cursed. With help from a special friend, the wheel, we reverse the curse. With one spin, someone will get the opportunity of a lifetime. Where there is a wheel, there is a way.

The wheel eventually moves onto Leon Ruff’s name, the only one that was hand written on the wheel.

After the match, Priest celebrates with Ruff on the stage while Gargano is shocked at what happened. Ruff heads to the back and almost trips when the belt falls from his waist.

After commercials, Leon Ruff is with McKenzie and he is asked how he feels. Damian Priest tells Leon that Johnny is pissed and he will come after you so get into my car and get out of here.

Gargano runs through the back while Priest says it was incredible. Gargano blames Priest for the loss. Officials have to hold Johnny back. Gargano wants Regal to do his job and he wants to know what idiot came up with that idea. Gargano says he hates wheels and he never would have come up with that. Priest tells Gargano to go watch Wheel of Fortune.

Earlier today, we see Jake Atlas in the parking lot and he says he is sick and tired of the numbers game and he goes after Wilde with a bat and he says he has one to go.

Atlas is sent to the apron but Atlas sends Escobar into the turnbuckles. Mendoza tries to use a pipe but hits the post and then he stops Wilde from interfering. Atlas hits Wilde and Mendoza with the pipe and then he punches Escobar and hits a springboard blockbuster for a near fall. Escobar rolls to the floor.

We see footage from the commercial break when Wilde and Mendoza tripped Atlas and the referee sent them to the back.

Atlas gets Escobar up and hits a Finlay Roll and knee and a moonsault for a near fall. Atlas goes for the Rainbow DDT but Escobar blocks it and hits a butterfly facebuster for the three count. 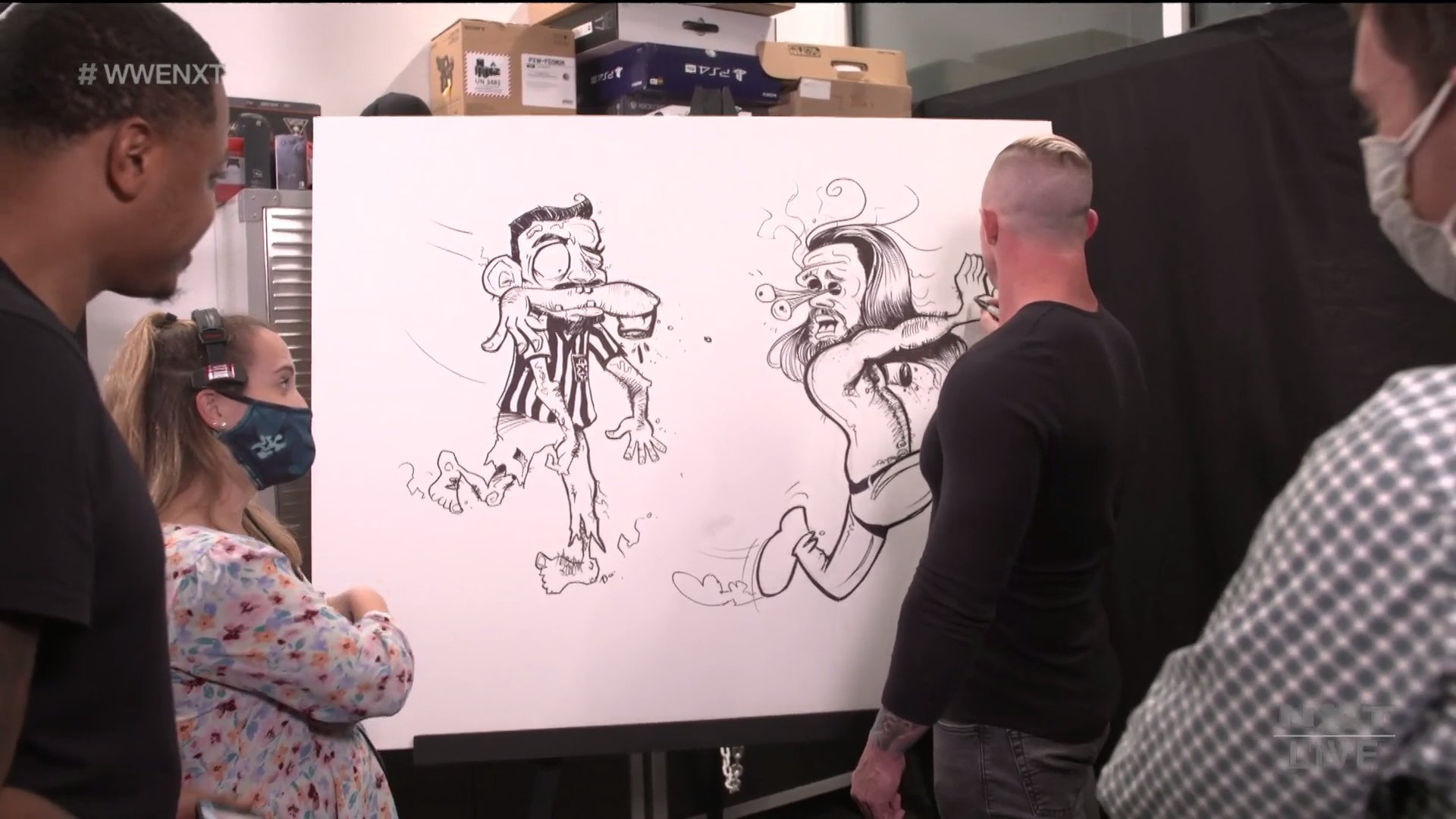 We go to the back where Dexter Lumis is doing a caricature of Cameron Grimes and the Zombie referee.

We are back with a look back at what happened last week with Shotzi’s tank. Shotzi says Candice didn’t destroy that tank, she destroyed a part of her. It is a part of her life. That tank represents freedom and family he has in the military. Now she wants to say we are even. We are way past even. Do you want to send me a message? Here is one right back. I am not looking for payback or revenge. I am looking to kick your ass.

Boa makes his way to the ring before Xia Li makes her way to the ring for her match. Boa bows and says that Xia is not here tonight so she cannot have a match with Xia. Boa says he is real sorry.

Gonzalez goes to the back and the lights go down and a dragon appears on the matrix board and the HHHTron.

A man who may or may not be David Lo Pan walks to the ring and hands Boa an envelope and he places a mark on Boa’s hand.

August Grey is asked about why he attacked Timothy Thatcher last week. Before Grey can say anything, Thatcher attacks him from behind and drags him through the back. Thatcher with a guillotine and Grey is down. Thatcher sends Grey into the caricature from earlier as officials tell him to back off.

Dexter Lumis shows up with William Regal and Thatcher says he has no problem with Lumis and leaves.

Candice LeRae had comments earlier today. She says she can still hear the popping noises when she ran over the tank. When you get in my way, I run you over. Just like I will run over that punk rock poseur Toni Storm.

Storm avoids a drop down and hits a drop kick followed by a reverse atomic drop and kick. Storm with a kick to the chest. LeRae goes to the floor and Storm follows. Storm misses a running hip strike against the ring steps when Candice moves. Candice breaks the referee’s count and then sends Storm back into the ring.

Storm with forearms and Candice goes for an elbow but Storm blocks it and hits a German suplex. Storm with a running hip strike and a sliding clothesline against the ropes. Storm with a running clothesline in the center of the ring followed by a fisherman’s suplex for a near fall. Storm goes up top and LeRae stops Toni. Candice goes to the turnbuckles and Storm knocks Candice to the mat. Storm misses a leg drop from the turnbuckles and LeRae with a kick for a near fall.

Storm kicks Candice into the corner and Candice sends Storm into the turnbuckles and Candice with the three count on a rollup with help from the ropes.

After the match, Storm attacks LeRae and then Ghostface attacks Storm and Candice chokes her. Shotzi punches Candice and then she kicks Ghostface. Ghostface with a running boot to Shotzi. Candice with a curb stomp to Shotzi.

Ghostface pulls off the mask to reveal that it is Indi Hartwell. 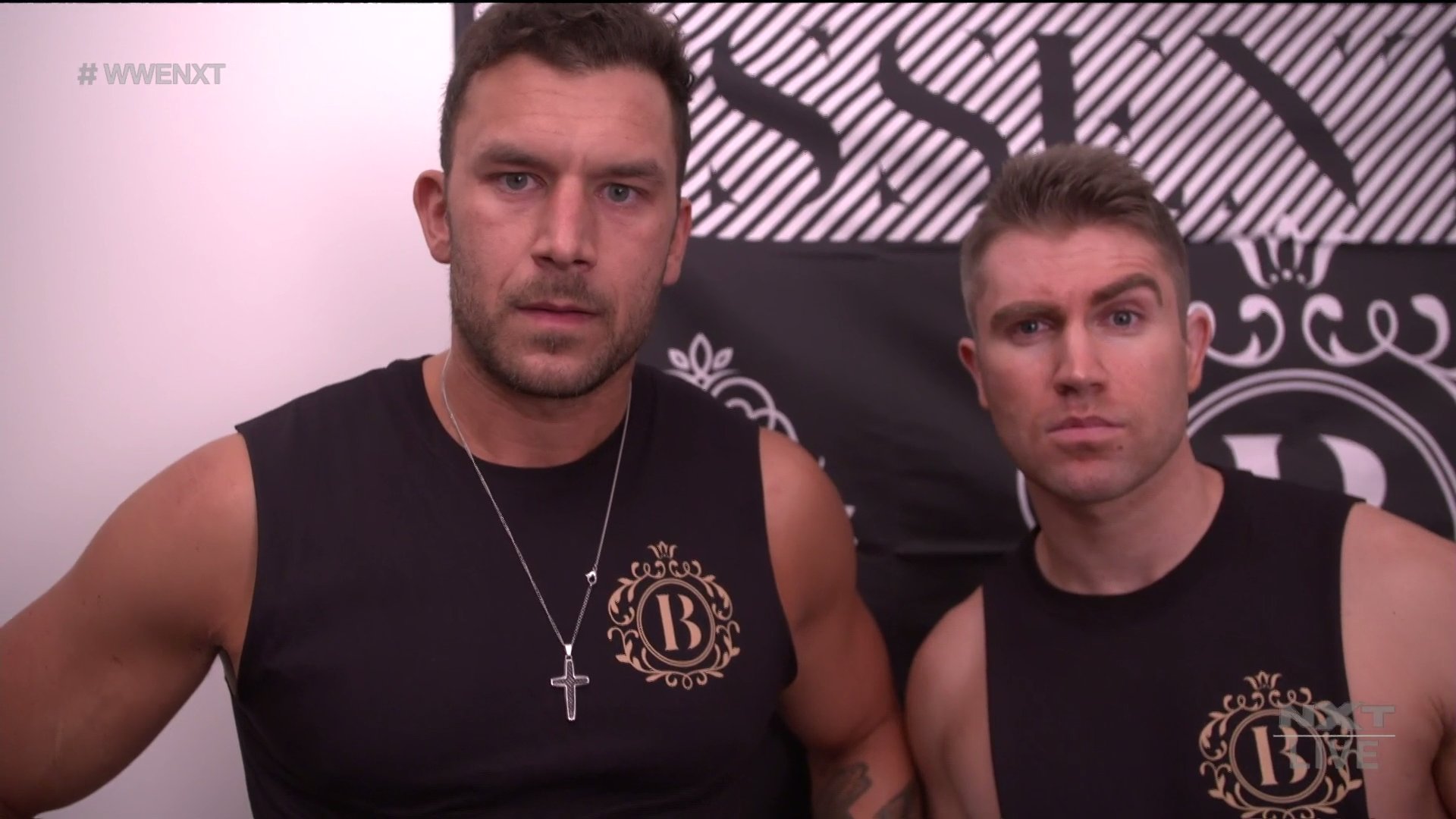 Fandango says it took five years but we did it. Breeze says they worked too hard to have the titles stolen by Pat McAfee. Fandango says McAfee is not a wrestler. Breeze says it won’t be fun Breezango tonight. They did it before and they can do it again. They will become two time champions.

Lumis goes for Silence but Thatcher sends Lumis into Grimes on the apron. Thatcher with a crucifix for the three count.

After the match, Grimes attacks Lumis. Lumis sends Grimes over the top rope to the apron and puts a sack over Lumis’ head and sends him to the floor. Grimes tells Lumis to look him in his eyes. Lumis gets a chair and swings wildly. Grimes kicks Lumis and hits him with a forearm. Grimes with a Cave in. 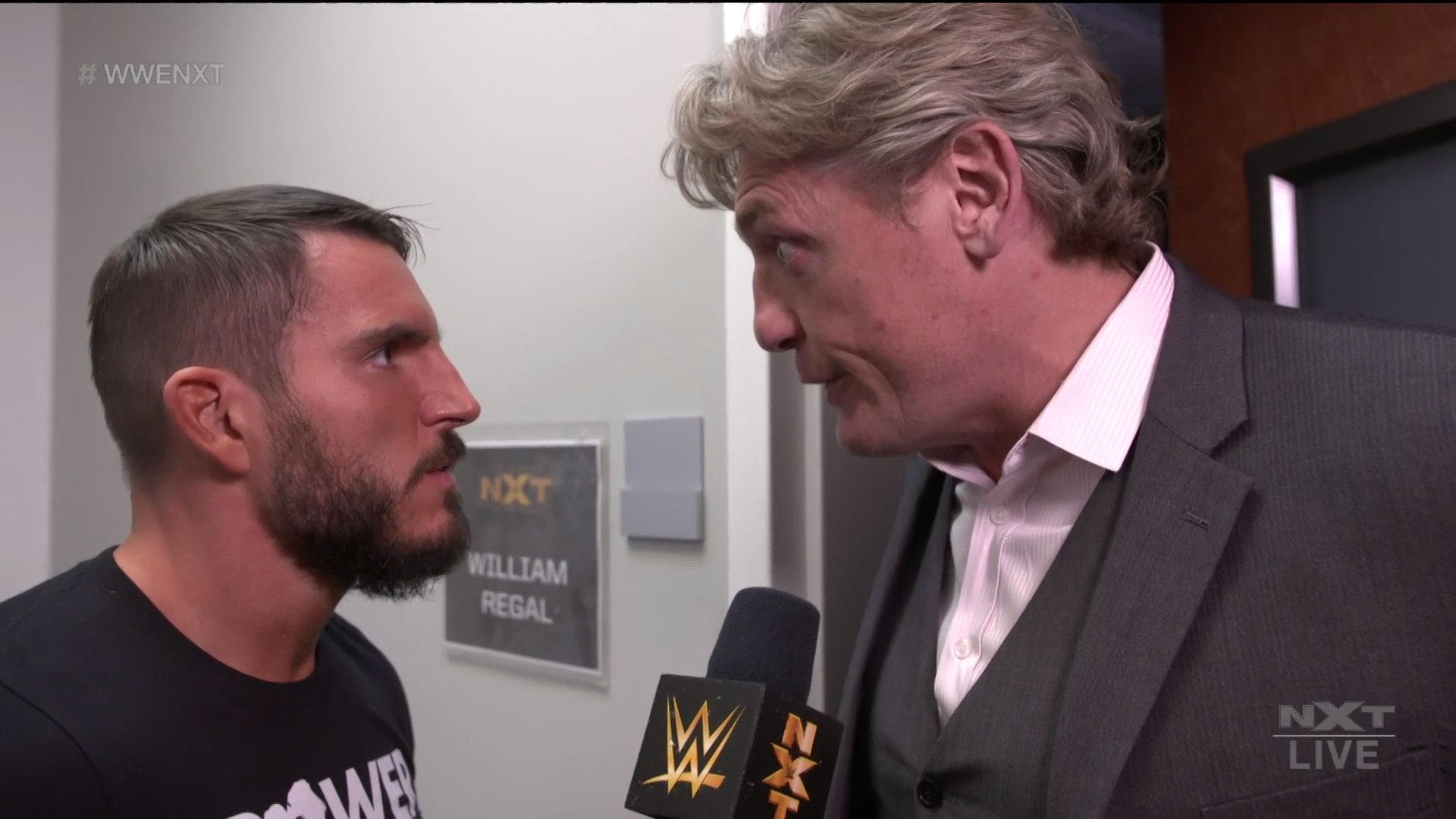 McKenzie ambushes Johnny Gargano outside of William Regal’s office and wants to talk to him calmly about what happened. Johnny says the match should be thrown out and the decision should be reversed. Regal tells Johnny it was his idea and there is no reason to reverse it. Johnny says he rigged the wheel. It was a goof. Everyone knows I am still the North American Champion. Regal says the curse is still alive and Leon Ruff is the North American Champion.

Tommaso Ciampa says he is approaching 16 years in this industry and he has run into some tough guys. He remembers training with Killer Kowalski and Harley Race. They never took liberties or told you how tough they were. They didn’t have to. You just knew. Times have certainly changed. I look around the locker room and apparently, everyone is tough. Just ask them and they will tell you how tough they are. Maybe it is the world we live in. Complain and get rewarded. Bark loud enough and long enough and people will be afraid of your bite. Actions without consequences. Maybe I am a bit old school. I never thought I would be the last of a dying breed, but I told you two weeks ago and I will tell you again. This 2020 locker room culture is going to change. Tommaso Ciampa is that change.

We take a look at Io Shirai and Rhea Ripley. Rhea says walking into Raymond James Stadium feels like a lifetime ago. Twenty-three years old in front of her biggest crowd at Wrestlemania. Instead, no crowd, no emotion, and I lost the title.

We see Io Shirai win the NXT Women’s Championship. She says when you are a disciplined champion, you do not have emotions or setbacks. I do not look back. Every challenger has learned and every opponent has realized that I stop momentum. I defeat the best. Rhea, it has taken you months to recover from WrestleMania. I am not afraid of nightmares.

Rhea says everyone thought that loss defined me and thought I was a quitter. I do not quit. Mercedes, Dakota, Raquel, and now Io. I don’t care what she thinks. Rhea says in one week, Io says you will go into the same emotional low again. Rhea says she will take back her title whether Io likes it or not. 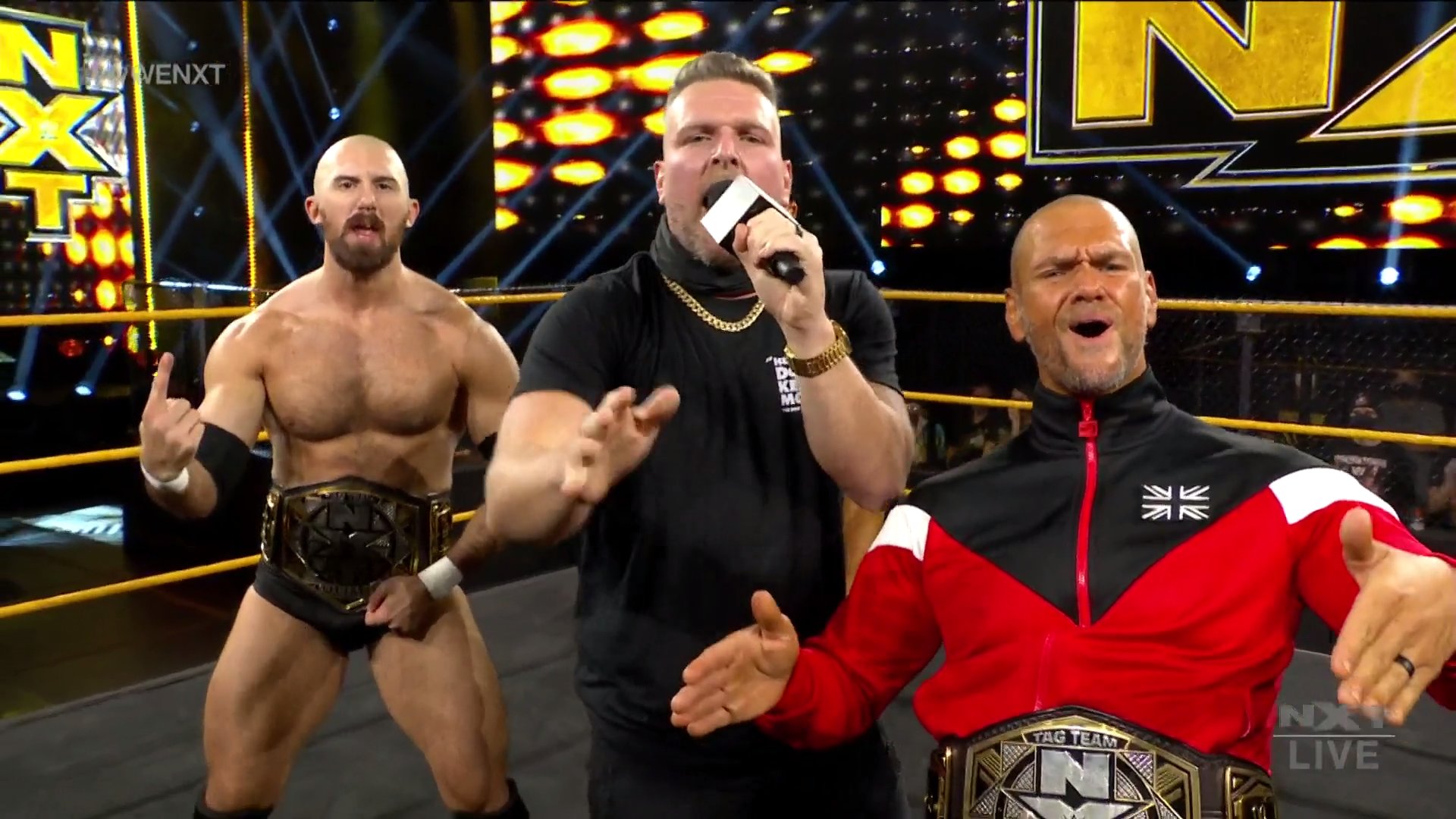 Pat McAfee makes his way to the ring with Pete Dunne, Oney Lorcan, and Danny Burch.

Pat says it should be recognized that Pete Dunne has been an absolute terror to this plan. Kyle O’Reilly and then Killian Dain. You are looking at the best four man group in the history of professional wrestling. Pat says he traveled on his private plane and I got tweets from Tom Brady and found out my business was worth $150 million. My plane almost crashed because of the Tropical Storm.

We are back and Cameron Grimes is in the back during the commercial break. He says he ain’t afraid of no ghost, ghouls, or zombies. He can say that he was afraid of Dexter Lumis because of those eyes. I covered them up. I have somewhere to be . . . TO THE MOON!!

Finn Balor will be back next week. 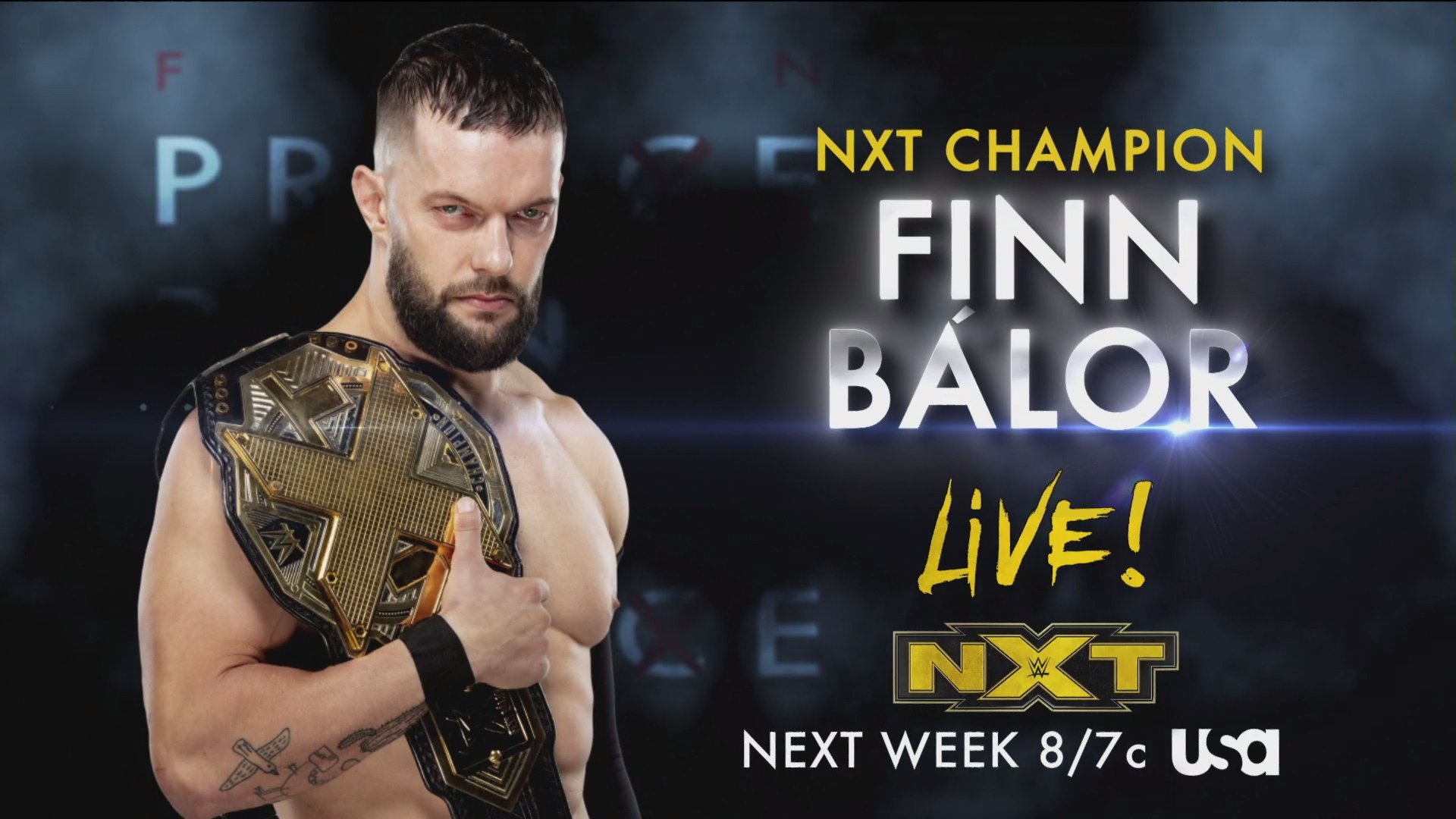 All four men brawl as the bell rings and Burch with a European uppercut to Breeze on the floor followed by a punch. Lorcan with a chop to Fandango. Fandango with a back body drop to Lorcan on the floor. Breeze with a double leg take down and a catapult into the fencing. Burch is sent into the ring and Fandango with punches. Breeze tags in and he kicks Burch in the corner. Breeze with a front face lock and suplex for a near fall. Lorcan tags in and kicks Breeze and goes for a suplex but Breeze blocks it and runs Lorcan into the corner.

Breeze sends Burch back into the ring and someone grabs Breeze as he enters the ring and that allows Burch to attack him from behind. Burch with kicks. Lorcan tags in and they chop Breeze. Lorcan with a back breaker and he gets a near fall. Lorcan with a hard Irish whip and he tags Burch back in. Burch punches Breeze and knocks Fandango off the apron. The referee keeps Fandango from getting involved and Burch with a suplex and he tags Lorcan back in. Lorcan with a Boston Crab. Breeze gets to the ropes and Burch tags in. Breeze catapults Burch into the turnbuckles. Lorcan and Fandango tag in.

McAfee jumps onto the apron and distracts the referee. Drake Maverick with an enzuigiri to Lorcan. Fandango with a leg drop for a near fall. Dunne with a running forearm to the back of the head of Maverick. Dunne sends McAfee into the ring so Dunne can knock Breeze off the apron. Burch tags in and Fandango chops Lorcan. Burch with a head butt and the elevated DDT for the three count.