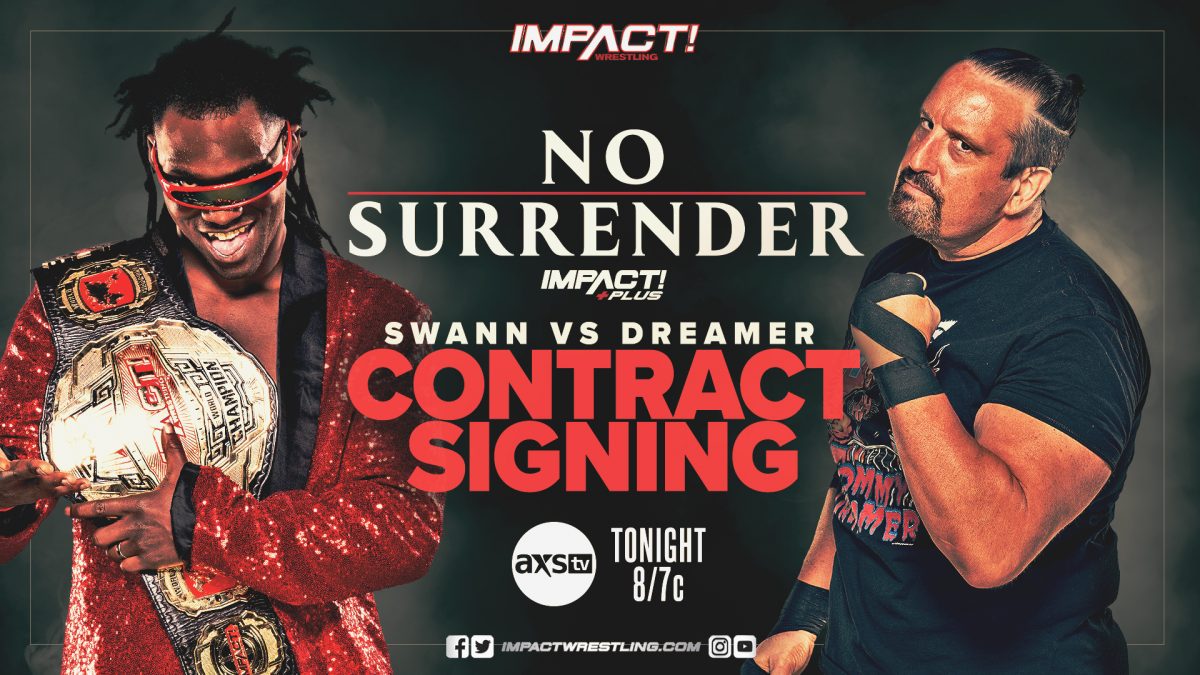 The competitors in this Saturday’s Triple Threat Revolver match at No Surrender give us a preview of things to come in this huge 8-man tag! The winner of the Triple Threat Revolver will receive a shot at the X-Division Championship! Ace dives through the ropes but Suicide sidesteps, causing him to collide with his own partner in Chris Bey. Daivari turns Willie inside out with a strong clothesline. Ace goes for a springboard but Alexander picks his ankle in mid-air! Alexander locks in the Ankle Lock but Christian soars through the air to break it up! Willie is on fire as he hits his signature standing Moonsault on Ace. Christian almost puts Trey away with a springboard Flatliner for two. Trey locks in an Hourglass submission on Christian, forcing him to tap out!

After the match, Sami Callihan appears on the screen and gets in the head of Trey Miguel. He claims that once things get hard for Trey, he’s going to leave IMPACT Wrestling just like he did recently.

The stars of IMPACT wish Tommy Dreamer a happy 50th birthday this Saturday. It’s on this night where Dreamer will challenge Rich Swann for the IMPACT World Title.

ODB made her shocking return last week when she came to the aid of Jordynne Grace and Jazz after a 3-on-2 beatdown from Deonna Purrazzo, Kimber Lee and Susan. ODB attempts the Dirty Dozen but Kimber counters to gain control. Kimber distracts the referee while Deonna and Susan attack ODB at ringside. Moments later, ODB hits a Bronco Buster in the corner for two. ODB sends Kimber flying off the top rope. Deonna and Susan try to get involved but Jordynne Grace and Jazz even the odds! ODB gets a piece of Deonna and Susan by launching herself off the apron. Back in the ring, Kimber rolls her up off the distraction to win!

We return to Swinger’s Palace where Fallah Bahh gets thrown out for not having any more money to place a bet.

Much to the dismay of Deonna Purrazzo and Kimber Lee, Susan insists on challenging ODB, Jordynne Grace and Jazz to a 6-woman tag team match this Saturday at No Surrender.

Cousin Jake is in the ring to give Violent By Design an answer – will he join his cousin Deaner as part of their group? Violent By Design interrupts as Eric Young gets on the mic. He tells Jake that there’s only one answer – to open his eyes and see the truth. Jake makes his decision when he takes off his Deaner vest and says “if you don’t stand for something, you’ll fall for anything… I stand for Jake Something.” Jake goes on the attack but quickly falls victim to the numbers game. They wrap a steel chair over his head but Deaner stops them. He wants to finish the job himself. EY grants him his wish in a singles match this Saturday at No Surrender.

AEW Owner Tony Khan and AEW commentator Tony Schiavone return for another paid ad to promote AEW Dynamite this Wednesday at 8/7c on TNT. Khan mentions that he’ll return to the IMPACT Zone sooner rather than later.

IMPACT Tag Team Champions The Good Brothers preview their title defense against Chris Sabin and James Storm later tonight. The winners will defend against AEW’s Private Party at No Surrender on IMPACT Plus!

Last week, Havok defeated Tasha Steelz in singles action. Can Nevaeh continue their momentum when she battles the other half of the Knockouts Tag Team Champions, Kiera Hogan? Neveah hits a strong clothesline for an early two count. Kiera distracts the referee as Tasha delivers a boot to the side of Nevaeh’s head. Nevaeh connects with a series of strikes, then plants Kiera face-first into the mat! Kiera rakes her opponent’s eyes, followed by a dropkick. The referee catches Tasha delivering a Codebreaker to Nevaeh, causing the disqualification.

Fire ‘N Flava barge into Scott D’Amore’s office and blame referee Brandon Tolle for their recent string of defeats. D’Amore informs them that Tolle will not be the referee when they defend their Knockouts Tag Team Titles against Havok and Nevaeh in a No DQ match this Saturday at No Surrender!

Kaleb With a K vs. Black Taurus

The newly formed alliance of XXXL, Tenille Dashwood and Kaleb With a K are in the ring. Last week, Larry D refused to hit Rosemary but found someone who was more than willing to – Tenille Dashwood. They will battle Decay this Saturday at No Surrender but Kaleb With a K wants a piece of the action tonight. Rosemary and Crazzy Steve come out to introduce the newest member of Decay – AAA’s Black Taurus!

Taurus sends Kaleb flying with a huge Samoan Drop! Kaleb attempts to use his camera bag as a weapon but Taurus counters with a spinning clothesline. Taurus hits a modified driver to score the quick victory.

Brian Myers is forced to pay his hired gun, Hernandez, before they face Eddie Edwards and Matt Cardona this Saturday at No Surrender. After being kicked out of Swinger’s Palace for not having any money, Fallah Bahh is seen staring at the cash.

.@SuperMexCTM gets half of his cash now, and the other half when he and @Myers_Wrestling finish the job against @TheMattCardona and @TheEddieEdwards THIS SATURDAY at #NoSurrender. #IMPACTonAXSTV pic.twitter.com/06uhzAJv1v

Sabin and Storm isolate Karl Anderson in the early going. Doc Gallows gets involved but they send him over the top rope to the floor with a double clothesline! Gallows turns the tide with a series of elbow drops to Sabin. The Good Brothers are in complete control when AEW’S Matt Hardy and Private Party appear on the stage. They’re set to face the winners of this match at No Surrender on IMPACT Plus. Storm quickens the pace with a running neckbreaker to Anderson, followed by a tilt-a-whirl head scissors. Sabin and Storm have Anderson beat when Private Party breaks up the count to cause the disqualification.

Scott D’Amore tells Matt Hardy that due to Private Party’s actions moments ago, their IMPACT World Tag Team Title match this Saturday at No Surrender will now be a three-way dance against The Good Brothers and Chris Sabin & James Storm!

Check out the rest of the lineup for No Surrender, this Saturday on IMPACT Plus: Fire ‘N Flava defend the Knockouts Tag Team Titles against Havok and Nevaeh in a Texas Tornado No DQ match. A new #1 contender to the X-Division Title will be crowned in the first-ever Triple Threat Revolver. TJP defends the X-Division Championship against Rohit Raju with Shera in his corner. Knockouts Champion Deonna Purrazzo teams with Kimber Lee and Susan to battle Jordynne Grace, Jazz and ODB. XXXL & Tenille Dashwood take on Decay. Deaner goes one-on-one with Jake Something. Eddie Edwards and Matt Cardona join forces against Hernandez and Brian Myers. Plus, Rich Swann defends the IMPACT World Title against Tommy Dreamer and more.

Scott D’Amore sits down with Rich Swann and Tommy Dreamer to sign the contract for their IMPACT World Title match at No Surrender. Swann granted Dreamer this opportunity as a special gift for his 50th birthday. Dreamer says that because opportunities like this don’t come easily, he will hold nothing back and that includes targeting the previously injured knee of Swann.

Self-proclaimed TNA World Heavyweight Champion Moose interrupts and reminds Swann that he promised him an IMPACT World Title match before anyone else. D’Amore stands up to Moose and threatens that he will be suspended if he gets involved in the match at No Surrender. Moose says that he doesn’t need to get involved because he’s already proven that he’s better than the both of them. Dreamer gives an emotional speech, stating that unlike Moose, he will continue to use his platform for good. Dreamer signs the contract, making the match official for this Saturday at No Surrender.