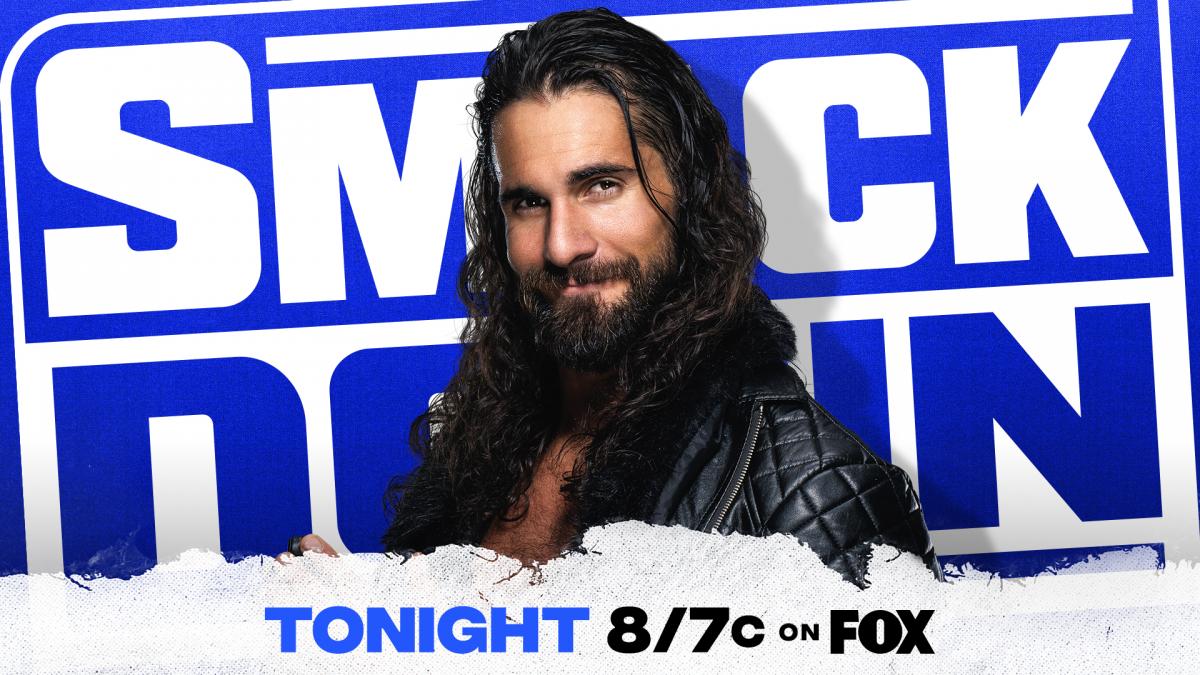 WWE SmackDown kicks off with Universal Champion Roman Reigns making his way down to the ring accompanied by his cousin Jey Uso and Paul Heyman. Adam Pearce is in the ring as the three men make their way up the steps and into the ring.

Roman tells Pearce not to stand so far away and to hurry up. He tells Pearce he doesn’t have authority over him. He tells Adam he is the sun, everything orbits around him. He doesn’t wait on anyone and not Edge. Roman says he saw Edge last week in the ring and Edge got nervous. He looked him in the eye and he got scared because Edge knows what Roman will do to him. He will beat him down so bad, they will have to put him on a legends contract. He’s just going to be an ambassador to the WWE when he’s done with him.

Reigns says he won’t wait on Edge. Edge won’t pick him and he will never lose that title. Roman says that title will stay on his shoulder for as long as he wants. And to talk about why Pearce is here. Pearce says he has a contract which states that Roman will defend his WWE Universal Championship inside the Elimination Chamber, just like Drew McIntyre. Roman tells him he will let him deal with Paul.

Pearce says there will be some qualifying matches tonight but he can think of two superstars that deserve to be in the Chamber and they don’t need to qualify. Pearce says Jey Uso will be in the Chamber match as Pearce leaves the ring. And after what happened at the Rumble, the second superstar who doesn’t need to qualify is Kevin Owens. Roman gets out of the ring and goes face to face with Pearce. He tells him he doesn’t care about them, right now, he cares about Pearce. Heyman tries to calm Roman down.

Pearce is backstage and in comes Sonya. He tells her they have less than 2 hours to put together this Elimination Chamber match. She tells him what if they do a tag team match and made it a qualifying match where both members of the winning team qualify for the match. She says she already took care of it and they’re on their way to the ring. Adam loves the idea.

During Sami’s introduction, he cuts Hamilton and says it’s not bad enough that management helped Big E steal his Championship. But now, instead of putting him in the Chamber match which he deserves, they put him in a qualifying match. And he has to do it teaming with Corbin but tonight they are on the same page. He says he is grateful he has documentary team to make sure that the referee doesn’t help the Mysterio’s win. He says he knows WWE wants them to win and expand in Latin America but that won’t happen.

The Mysterio’s knock Sami off the ring apron as the referee calls for the bell.

A drop kick by Rey takes Corbin onto the second ropes. Rey runs to the ropes but Zayn ties him up. Dominik knocks Sami down. Rey throws Corbin to the outside.

Back from commercial, Rey throws Corbin into the second turnbuckle and Sami is tagged in as as Dominik. A right hand by Dominik as he knocks Sami down. Dominik on the second rope and a tornado DDT. He goes for the cover but Sami kicks out. Right hands by Dominik and he’s on the ring apron. Dominik slams Sami down. A senton over the top rope. Dominik knocks Corbin down. Sami rolls Dominik up but Dominik kicks out. Sami with the Blue Thunder Bomb. He goes for the cover but Dominik kicks out. 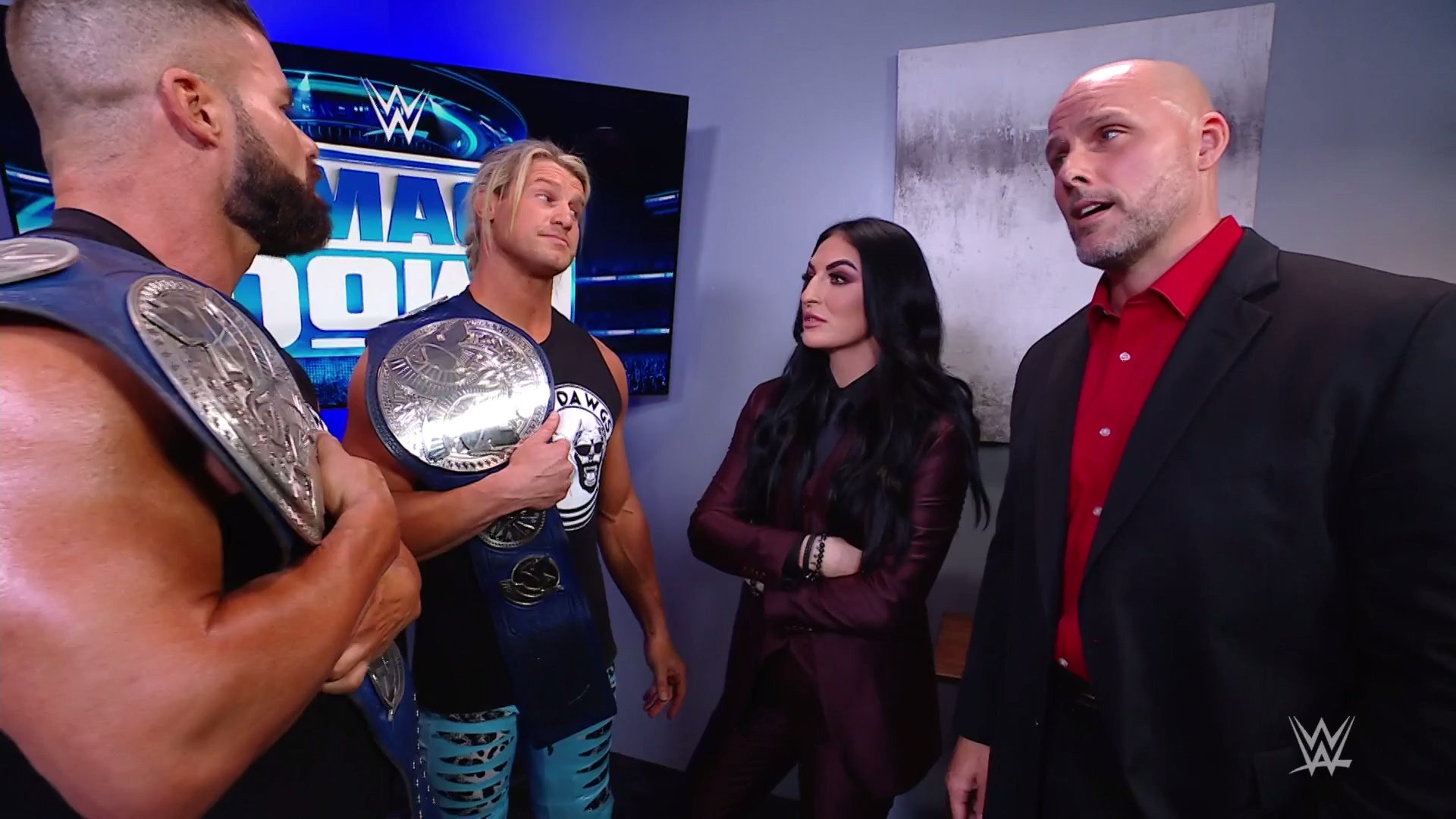 Pearce and Sonya are backstage and in come Dolph Ziggler and Roode. They talk about the overwhelming response they’d get if they were put in the Elimination Chamber match. Sonya asks them if they want to be in the Chamber match together. Ziggler says the two of them in separate pods. Sonya says they can earn themselves a spot in the match in a match against Cesaro and Daniel Bryan.

Reginald approaches Sasha with a glass of champagne. He says he was out of line and it will never happen again. Sasha flirts with him and tells him to send Carmella her regards. She grabs the champagne as Reginald walks away.

Big E is standing in the ring and he says last week he defended his Intercontinental Championship and the odds were against him. But much like Tom Brady in a celebratory throw on a boat, he was still standing. But he made a vow to be a defending Champion. A vow like gorilla glue and hair, it is strong. Apollo’s music hits. He tells Big E that he was about to make an open challenge and he accepts it. Big E tells him that he was about to open an open challenge to anyone here but him.

Apollo tells him Big E is a guy the locker room looks up to. He is supposed to take on all challengers. Big E tells him to go to catering as both men argue. Out comes Nakamura.

Back from commercial and the match is already under way with Apollo at ringside. Nakamura stomps on Big E in the corner. Nakamura runs towards Big E but Big E knocks him down. He grabs Nakamura and place shim on the ring apron. Big E with the Big Splash on the ring apron. Back in the ring, he goes for the cover but Nakamura kicks out.

WWE superstars surround the ring as Seth Rollins makes his way down to the ring with his Burn it Down theme song. Seth gets in the ring and says it feels good to be back in the ThunderDome and back in the ring. He says this is where he belongs. A lot has changed since he sacrificed himself at Survivor Series. But in his absence the thing that has changed the most has been a surprise. And that is him. He says as most of him know, he has recently become a parent for the first time. He is a proud father of a beautiful, perfect baby girl.

Seth says his daughter has changed his life in ways he never could have dreamed of and that change gave him a new perception and vision. When he looks around the ring, he sees some of the most talented performers in WWE history. He asks where he fits in and after a lot self reflection, the answer became very clear. He is the great leader that SmackDown needs to push it into the future and make it greater than it already is. He says success and leadership, it’s not about what they can do for him, it’s about what he can do for them.

Seth looks around and Cesaro is the only one still standing around the ring. Seth tells him he knew he would get it and understand. Cesaro shakes his head and leaves as Seth gets out of the ring and attacks him from behind.

The bell rings and we are under way. RIght hands by Bayley but a drop toe hold by Liv takes Bayley down. Morgan with a drop kick off the top rope. She goes for the cover but Bayley kicks out and Bayley heads to the outside. Liv jumps off the ring steps but Bayley moves out of the way and throws Liv into the barricade. Bayley throws Liv into the ring as she goes for the cover but Liv kicks out.

Kayla is backstage with Cesaro and Bryan. She asks Cesaro if he’ll be able to compete after what Seth did to him. Cesaro says he will be good to go and he will take advantage of his time tonight and they’ll win.

The bell rings and we are under way. Gable and Dawkins are in the ring. Both men exchange holds and reversals. A head lock by Gable as Dawkins rolls out of it. An arm drag take down by Gable and one by Dawkins. Ford is tagged in as Gable flattens him. An arm drag take down by Gable. He sends Ford to the ropes as Dawkins is tagged in and he shoulder blocks Gable. He goes for the cover but Gable kicks out.

Both men back up and Otis is tagged in. A shoulder block by Otis takes Dawkins down. Ford jumps into the ring but Otis slams him down and throws him to the outside. Otis picks Dawkins up and throws him across the ring. The big splash by Otis and Dawkins is down. Otis with the caterpillar as Gable is tagged in. They try to double team Dawkins as Otis runs to the ropes but Ford lowers the top rope and Otis to the outside. Ford is tagged in as Dawkins slams Gable with the Appointment and Ford with the frog splash. He goes for the cover and gets the pin.

WWE SmackDown Women’s Champion Sasha Banks is in the ring as she says everyone is talking about Bianca Belair and her decision. Sasha says she likes Bianca a lot, she’s like a big little sister. There’s only one choice for the EST to make and that is her.

Out comes Bianca to the ring. Bianca tells Sasha she sees her and she heard what she said about her and she likes her too but no. Because Sasha isn’t the boss of her. Bianca says it’s her time and she is enjoying every second of it.

Out come Nia Jax and Shayna Baszler. Nia says they are insufferable. With their big egos, it a wonder how they fit in the same ring together. Nia says why is everyone talking about who Bianca will choose, no one cares. Shayna says the same night Bianca won the Rumble match, they became the two time Women’s Tag Team Champions but they are being ignored. Nia says they are on a roll. Sasha says she came prepared and to roll the footage. We see a clip of last Monday where Shayna attacked Lana on the outside and Naomi got the win.

Sasha says that wasn’t the footage she was talking about. Nia tells her no to. We see the clip of Nia missing her leg drop and hurting herself. Nia and Shayna attack Sasha and Bianca but Sasha and Bianca get the upper hand on them. They trip Nia up and she falls butt first again onto the ring apron. Back inside the ring, they double team Shayna.

Roode runs towards Bryan but Bryan throws him to the outside. Bryan goes for a suicide dive, Roode moves out of the way and Bryan falls onto Cesaro. Ziggler attacks Cesaro on the outside. Corbin and Sami walk down to the ring.

Back from commercial, Roode is stomping on Bryan in the corner. A suplex by Roode takes Bryan down. He goes for the cover but Bryan kicks out. We see Roman Reigns and Paul Heyman watching the match backstage.

Ziggler goes for the super kick but Cesaro ducks and hits him with the spine buster. He swings Ziggler around and gets the sharpshooter on Dolph and he taps out.

After the match, Jey Uso, Sami Zayn and King Corbin run out and attack Bryan and Cesaro. The heels then start fighting each other until Kevin Owens comes in and gives a Stunner to everyone. Owens then says he’s coming for Roman Reigns and is not done with him.