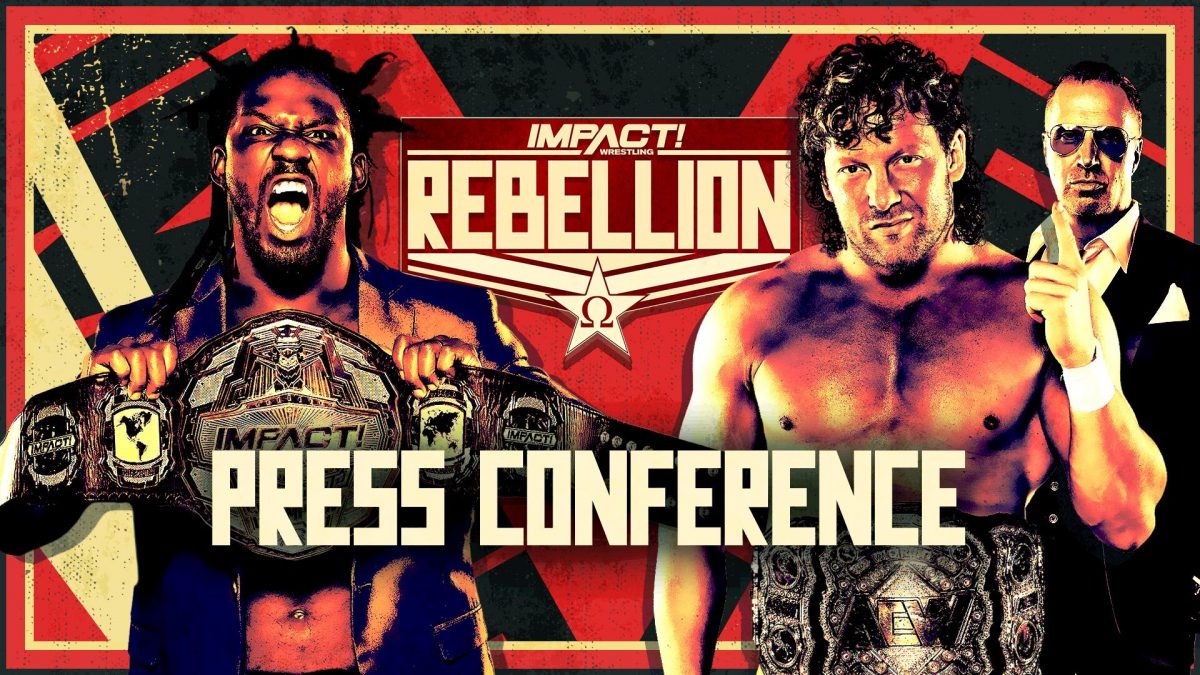 Before they challenge X-Division Champion Ace Austin in a 3-way match at Rebellion, TJP and Josh Alexander look to build momentum towards the huge title clash! TJP attempts to lock in the Octopus but Alexander counters into an Electric Chair. Alexander hits a powerbomb on the hardest part of the ring. TJP picks Alexander off the top with a thunderous Superplex. Both men exchange submission attempts with TJP gaining the upper-hand. Alexander counters the Mamba Splash into an ankle lock. After several counters, Alexander finally puts TJP away with Divine Intervention.

This past Saturday at Hardcore Justice, Doc Gallows was victorious over Black Taurus of Decay. Karl Anderson looks to continue The Good Brothers’ winning ways as they prepare to challenge FinJuice for the World Tag Team Titles at Rebellion! Steve catches him off-guard, almost scoring a quick victory in the opening moments of the match. Anderson retreats to the outside to regain himself. Moments later, Anderson gains control by throwing Steve into the corner turnbuckles. Gallows provides a distraction at ringside, allowing Anderston to capitalize with the Spinebuster for three.

Eddie Edwards and Willie Mack are in the ring. They address their loss to Violent By Design in the Hardcore War this past Saturday on IMPACT Plus. Eddie challenges VBD to another fight, and they come to ringside. Eric Young tells Eddie that he had nothing to do with Tommy Dreamer being taken out of action prior to their match at Hardcore Justice. VBD surrounds the ring when James Storm and Chris Sabin come out to even the odds! A huge brawl breaks out with Eddie, Willie, Storm and Sabin gaining the upperhand. VBD retreats up the ramp but not before Storm challenges them to an 8-man tag team match at Rebellion!

Scott D’Amore tells Knockouts Champion Deonna Purrazzo and Susan that they are banned from ringside during Jazz’s retirement tonight.

Backstage: All About Me w/ Special Guest Tenille Dashwood

Tenille Dashwood hosts the first episode of her new talk show, All About Me! Her guest tonight is none other than – herself. Tenille brings Gia Miller onto the set and instructs her to ask questions. Gia brings up Tenille’s huge victory in the #1 Contenders Knockouts Weapons match last Saturday at Hardcore Justice. With that victory, Tenille has earned a Knockouts Title opportunity against Deonna Purrazzo at Rebellion. Tenille claims that she started the women’s revolution and she’s going to become Knockouts Champion for the first time. Tenille notes that she and Deonna have faced each other outside of IMPACT Wrestling and that Deonna has never defeated her.

.@Phenom_Jazz thinks the future of the Knockouts division is bright with the likes of @DeonnaPurrazzo and @JordynneGrace leading the way. #IMPACTonAXSTV pic.twitter.com/EtC3iygPNP

Jordynne Grace accompanies Jazz to the ring for her retirement. Jazz starts off by thanking Jordynne for giving her an opportunity to compete in the Knockouts Tag Team Title Tournament. Jazz also thanks IMPACT Wrestling for allowing her to go out with a bang! Knockouts Tag Team Champions Fire N’ Flava disrespectfully interrupt her. Kiera Hogan and Tasha Steelz may have bitten off more than they can chew as a referee informs them that per Scott D’Amore, they have a match against Jordynne and Jazz, right now!

Jordynne is on fire as she hits Tasha with her signature splash out of the corner. Jazz puts Kiera away with a big sitdown powerslam for three!

Scott D’Amore offers Jordynne Grace and Jazz a Knockouts Tag Team Title opportunity at Rebellion but Jazz declines after saying that she’s a woman of her word. Jazz offers to find Jordynne a new tag team partner for Rebellion and says that she has the perfect candidate.

Pick Your Poison
Brian Myers vs. Jake Something

It’s time for Matt Cardona and Brian Myers to compete in Pick Your Poison. Cardona is up first and he chooses Jake Something as Myers’ opponent!

Jake gains control with a big running splash. Myers tries to build momentum but Jake shuts him down with a series of strikes. Jake hits a running shoulder tackle in the corner. Myers starts a game of cat and mouse before goading Jake into the Roster Cut clothesline for three.

Now it’s Myers turn to pick Cardona’s opponent. Myers says that it’s hard to see with his eye patch on but it’s even harder to see in the dark. The lights go out and Sami Callihan attacks Cardona on the ramp!

Callihan turns his back and Cardona connects with Radio Silence for a very close near fall! The fight spills to the outside where Cardona hits a Russian legsweep into the steel guardrail. Cardona is overly aggressive as he crashes and burns on the floor. Callihan is in control for several minutes when Cardona continues to fight back with a series of running boots. Callihan uses the referee as a shield, allowing him to deliver a thumb to the eye! Callihan connects with the Piledriver to put Cardona away.

.@TheTreyMiguel has DECLINED the opportunity to be mentored by @TheSamiCallihan. #IMPACTonAXSTV pic.twitter.com/he16InlPUa

After the match, Sami Callihan calls out Trey Miguel. Last week, they joined forces against XXXL in tag team action. Trey comes to the ring and says that he didn’t do it for Callihan, his only intention was to eliminate XXXL. Callihan reveals that he was the one who attacked Tommy Dreamer at Hardcore Justice, allowing Trey to replace him in Hardcore War. Callihan tells Trey that he should be thankful for that opportunity. Callihan offers his hand but Trey explodes and goes on the attack! Callihan turns the tide and lays out Trey with a vicious suplex onto a steel chair. As Callihan walks up the ramp, Trey gets to his feet!

IMPACT World Tag Team Champions FinJuice send a message to The Good Brothers all the way from Japan! The two teams will collide with the titles on the line on April 25th at Rebellion.

IMPACT World Champion Rich Swann, Scott D’Amore, AEW President Tony Khan and Jerry Lynn are all present for the Rebellion Press Conference hosted by Josh Mathews. The media will be given an opportunity to ask questions ahead of the historic Title vs Title match between Swann and Omega at Rebellion.

Mike Johnson of PW Insider inquires about Rich Swann or Kenny Omega being committed to the other promotion if they become Unified Champion. Both D’Amore and Khan ensure that whoever wins, they will be able to work a full schedule for both promotions. Khan also guarantees that one way or another, there will be a winner and he’s bringing an AEW referee to ensure that happens.

AEW World Champion Kenny Omega and Don Callis arrive late to the conference. Gareth A Davies from The Daily Telegraph asks Don Callis when he’s going to stop playing both sides as both Omega’s manager and the IMPACT Executive Vice President. Callis deflects and instead invites Omega to speak at the podium.

A confident Omega says that he’s been here before, speaking at a press conference before a big match. Omega tells Swann that he doesn’t blame him for being nervous but ultimately, he doesn’t belong in this history-making main event. Omega calls Swann the means to an end and that when people look back on the match that opened the forbidden door, they’re not going to remember him. Omega signs off but then slaps Swann across the face! Swann charges at Omega and tensions explode into an all-out brawl! Security attempts to break things up as IMPACT! goes off the air.