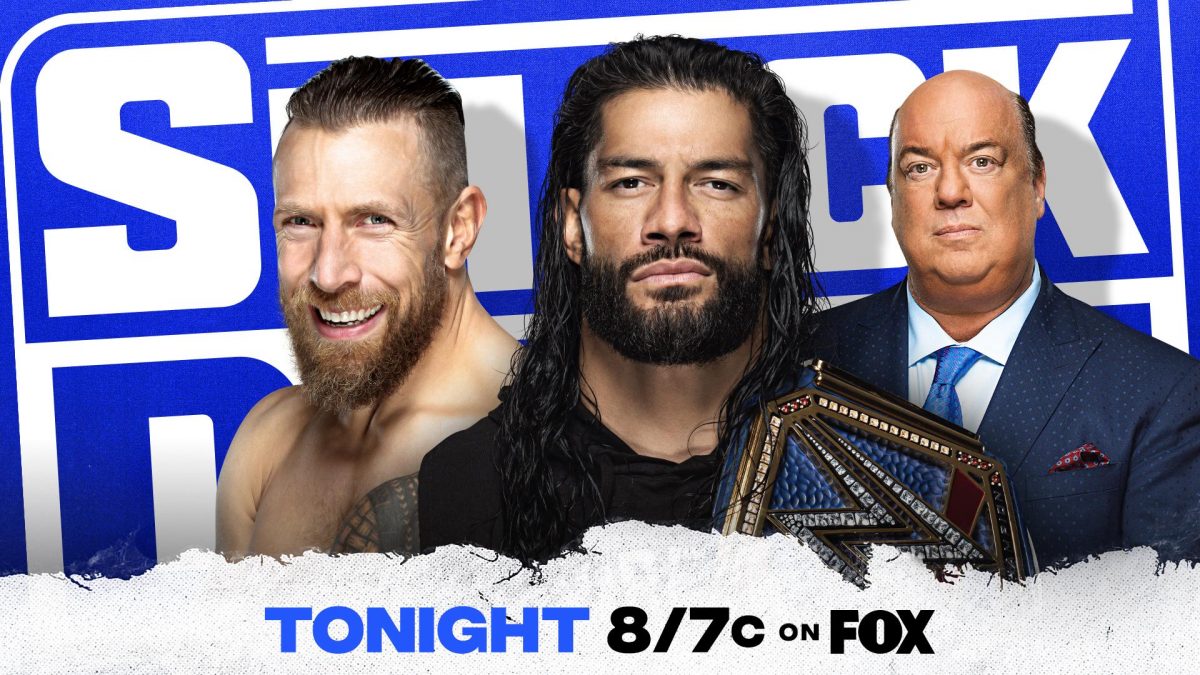 The SmackDown Tag Team Champions make their way out. They tell Bianca that they’ll take it from here. Out come The Street Profits. Ford says it’s SmackDown but did the Dirty Dogs just interrupt the main event of WrestleMania, Bianca? Dawkins says they did but that means one thing.

Out comes Bayley to the ring. She grabs the microphone from Bianca and begins to laugh. She points to the Street Profits and laughs as Bianca slaps her. Bayley gets up and takes Bianca down. All six superstars fight in the ring.

We are back from commercial and the match is already under way. Bayley with a clothesline on Bianca. Both women back up and a shoulder block by Bianca. She goes for a dropkick but Bayley moves out of the way. Bayley goes for the cover but Bianca kicks out. Bayley goes for a spear in the corner but Bianca moves out of the way and Bayley hits shoulder first. Ziggler is tagged in.

We’re going waaayyyy back next Friday on #SmackDown! pic.twitter.com/6zt36aUwvi

Next week will be a retro/throwback themed episode of SmackDown.

Kayla is backstage with Bryan. He says he is at peace with this match tonight but she should ask Roman since it’s his title on the line. This is what he has always wanted, a one on one match vs. Roman. He has tapped Roman out before and he will do it again. And his first title match if he wins will not be vs. Roman, it will be against somebody who’s been waiting for too long, Cesaro.

Seth talks about how it’s funny that Bryan thinks he will win and give Cesaro first crack at the championship. But his prediction for tonight is pretty simple. He has a bit of history with Roman but his prediction is that Daniel Bryan wins in one of the biggest upsets of all time. And as for Cesaro, he won’t get a title match because he won’t make it passed next week because that’s a challenge.

We see a clip of last week’s match involving Nia Jax and Tamina. Jax, Shayna and Reginald are backstage. In comes Megan and they talk about how they are the tag team champions. Nia says she is sick and tired of the disrespect they get on Raw. Natalya and Tamina attack them from behind and head to the ring.

The bell rings and we are under way. Tamina throws Nia into the turnbuckle. Tamina knocks Shayna off the ring apron and she climbs the top rope. Tamina goes for the splash but Nia gets her knees up. Shayna is tagged in. They double team Tamina. Shayna goes for the cover but Tamina kicks out.

Tamina goes for a spear in the corner but Natalya moves out of the way. Tamina is tagged in. Tamina knocks Nia down. Tamina gets on the top rope and she knocks Reginald off the ring apron. Natalya beats up on Reginald on the outside as Shayna attacks Natalya. Nia with a right hand on Tamina. Shayna is tagged in and she goes for a suplex off the top rope but Tamina blocks it. Tamina with a headbutt takes Shayna down. Tamina with a Superfly Splash. She goes for the cover and gets the pin.

“A chance to make history by becoming the first father-son #SmackDown Tag Team Champions? That’s legendary!” @reymysterio & @DomMysterio35 are ready to take the next step as a team! pic.twitter.com/zxzu8Z9uPv

Kayla is backstage with Rey and Dominik Mysterio. She asks them about their recent wins vs. The Alpha Academy. Dominik lists Rey’s accomplishments and saying that fighting alongside him is like being in a comic book. Rey says nothing beats this experience of possibly making history and being the first father and son tag team champions.

An Aleister Black promo airs. He says people look at him and make assumptions and judge him because that’s the true nature of man. He has always lived in this reality. He says chapter 2, reality. He talks about people build their life on a foundation of lies. He said his father never fed him those dreams, he was quick to teach him the truth. And the truth is that there is a lot wrong with all of that and everyone. He says he has the keys to free everyone but he won’t give them.

Big E is backstage with Megan. He says he has been all around the world and it’s all the same thing. How will he do in his rematch, how will he go through Commander Azeez? He says he and Apollo have been round and round but all of that comes to an end. Because tonight, he gets his baby back. And he will sit her in the passenger seat, he will buckle her for safety and tonight he will become a three time Intercontinental Champion.

After commercials, the bell rings and we are under way. Apollo goes for a waist lock but Big E throws him down. Apollo gets back up and he runs to the ropes, Big E catches him with an abdominal stretch. Apollo sent to the ropes and a back elbow by Big E. He goes for the cover but Apollo kicks out. Big E places Apollo onto the ring apron. Big E with the big splash on the ring apron.He goes for the cover but Apollo had his foot on the bottom rope.

Big E runs to the ropes but Apollo catches him and bounces him off the top rope. Apollo with a clothesline. He drags Big E to the outside and hits him with a suplex.

Back from commercial, Apollo with right hands in the ring. A big boot by Apollo who goes for a double axe handle off the second rope but Big E catches him and throws him around. Big E on the ring apron but Apollo with a jump up kick knocks him down. Apollo on the ring apron and he lands a moonsault on Big E taking him out.

Kevin Owens runs down to the ring and attacks Commander Azeez but Azeez throws him away. He and Crews double team Owens. In comes Big E who knocks Crews to the outside as he and Owens double team Azeez in the corner but Azeez knocks Big E down.

In comes Sami who hits Kevin with the Helluva Kick. Crews and Azeez clean house. Sami grabs the Intercontinental Championship. Crews andAzeez tell him to give the belt back. Sami gives Crews the belt and tells them he has no problem. Azeez knocks Sami down.

Kayla is backstage with Heyman. She asks about Daniel Bryan. Heyman says he is sick of hearing the name Daniel Bryan. He says Bryan should never have broken into this business. Has he had a hall of fame career? Yes. Has Bryan always defied the odds? Yes. Was he the ultimate underdog? Yes. Did he graduate to the big stage of NXT, SmackDown and Raw? Yes. Did he achieve the ultimate becoming the champion of WWE at WrestleMania? Yes. Can he once again defy all the odds and make the ultimate come back of all time? Yes. And does everyone believe that Bryan will win? Yes. Do they think Bryan will become head of the table? Yes. Will he do it? No.

Heyman says Bryan will not beat Roman Reigns. He will not survive the onslaught of the tribal chief, he will not be on SmackDown again. No, no, no.

If Bryan loses, he is banned from SmackDown.

Roman Reigns makes his way down to the ring with a new theme song! Bryan is already in the ring as the ring bells and we are under way. Bryan with a dropkick onto Roman. He gets him in the corner and kicks by Bryan but Roman pushes him away. Roman with a big right hand knocks Bryan down. A head lock by Roman as Bryan sends him to the ropes and a shoulder block by Roman. He runs to the ropes as Bryan brings Roman down. Bryan goes for the Yes Lock but Roman escapes and rolls to the outside of the ring.

Bryan gets on the ring apron and lands the running knee on Reigns.

Back from commercial, Bryan with kicks in the corner. Bryan with a running knee. And a second running knee in the corner. Bryan goes for a third but a huge clothesline by Roman knocks Bryan down. Roman goes for the cover but Bryan kicks out. A headbutt by Roman knocks Bryan back down. Roman with a snap suplex. He goes for the cover but again Bryan kicks out.

Roman tries to get out of it and does. Forearms by Roman. Roman lifts Bryan up and slams him down onto the mat. Roman with more forearms. Roman lifts Bryan up again and slams him down. Roman grabs Bryan but Bryan holds onto Roman’s right arm. Roman switches to the left arm and gets a guillotine on Bryan in the middle of the ring. Bryan fades as the referee calls for the bell.

Jey throws Cesaro into the ring and they tie Cesaro up in between the ropes. Roman hits Bryan with a conchairto as SmackDown goes off the air.