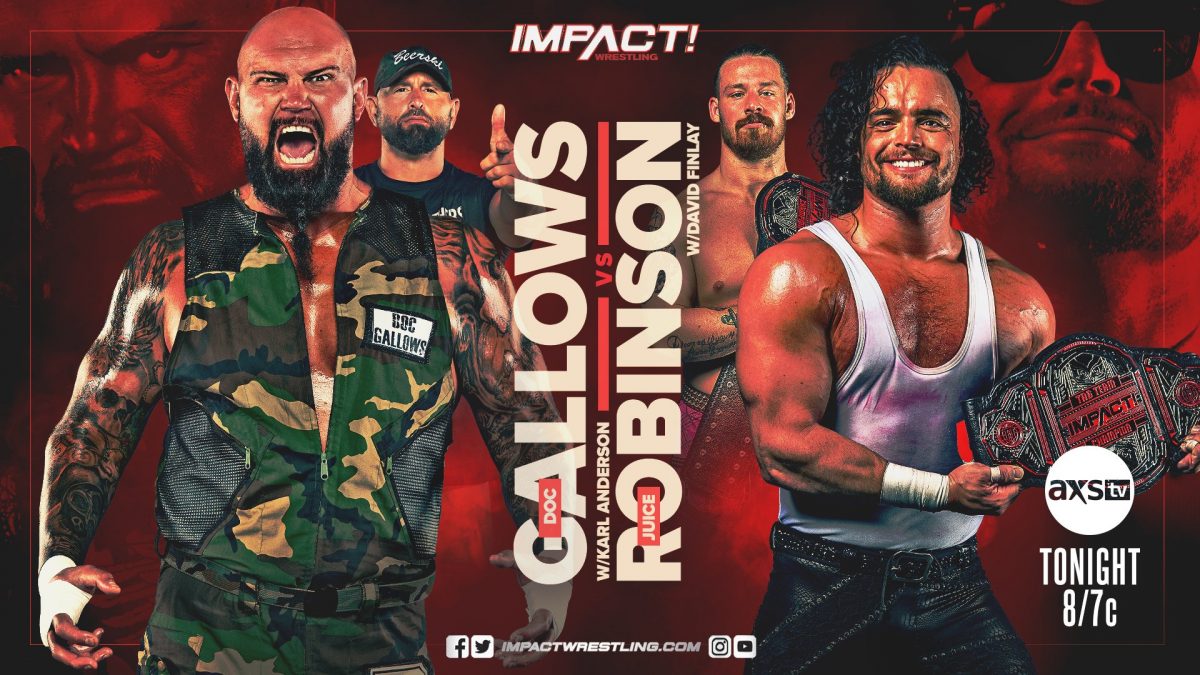 May 6, 2021
Nashville, TN
Results by ImpactWrestling.com

The war between IMPACT and VBD continues but the stakes are higher than ever as the winner will advance to the 6-Way #1 Contenders match at Under Siege. Deaner trips up Sabin from ringside just minutes into the match, giving Rhino the upper-hand. Both men are laid out after a clash of heads. Sabin quickens the pace with an Enzuigiri, followed by a slingshot crossbody to the floor. Deaner plays dividends once again as he distracts the referee, allowing Rhino to deliver a thumb to the eye. Rhino hits a big Superplex for two. Sabin avoids the Gore, then cradles Rhino to score the three count.

Rosemary confronts an enraged Brian Myers after he failed to qualify for the #1 Contenders match, losing to his former best friend, Matt Cardona. Rosemary tells Myers that his ego is holding him back before Black Taurus shoves him to the floor.

Taylor Wilde looks to continue her winning ways since returning to in-ring competition last week. Wilde hits a rope-assisted arm drag. Susan distracts the referee as Kimber Lee chokes Wilde on the bottom rope. Kaleb With a K comes down to ringside as it becomes apparent that Tenille Dashwood’s intentions of forming a tag team with Wilde remain. Wilde launches herself the apron, connecting with a running Hurricanrana. Lee targets Wilde on the outside but Kaleb intervenes and neutralizes the situation. Meanwhile, Tenille Dashwood appears and hits Susan with a modified neckbreaker. Wilde connects with a bridged German suplex for three.

After the match, Dashwood tries to pose with the victor but Wilde wants no part of her.

Backstage, Gia Miller suggests that Knockouts Champion Deonna Purrazzo is avoiding Taylor Wilde. Purrazzo denies the claim before being interrupted by Rosemary and Havok, who both want a shot at the Knockouts Title. Purrazzo tells them that she’s on her way to Scott D’Amore’s office to arrange a #1 Contenders match between the two.

W. Morrissey is here to make everyone feel the agony that he once felt and it starts with Willie Mack at Under Siege.

“You associate this face with one half of a catchphrase…so it was entirely up to me to rebuild myself after I was shattered into pieces.” @TheCaZXL is here to make everybody else feel the agony he felt. #IMPACTonAXSTV pic.twitter.com/E4JFI0mCuX

Trey attempts a submission in the opening moments of the match but Rohit quickly retreats to the outside. Rohit shuts him down with a running back elbow. Rohit hits a modified DDT for two. Rohit provides a distraction as Shera attacks Trey behind the referee’s back. Rohit targets the shoulder, then hits a vicious Flatliner. Trey creates separation with a double foot stomp. Both men exchange strikes in the middle of the ring with Trey gaining the upper-hand. After a flurry of offense, Trey locks in the Hourglass submission to win.

Post-match, Jake Something exacts his revenge on Rohit Raju and Shera after they cost him his #1 Contenders match Qualifier last week.

Speaking of the 6-Way #1 Contenders match at Under Siege, it’s a hot topic of discussion at Swinger’s Palace. Chris Bey tries to plant seeds of doubt between Chris Sabin and James Storm. Sabin qualified earlier tonight, while Storm battles Moose later on.

Juice gains control in the early going with a running cannonball in the corner. Gallows turns the tide with a big roundhouse kick, knocking Juice all the way to the floor. Omega is there to lend Gallows some advice as the big man begins the wear-down process. Gallows hits a big boot for two. Juice avoids an elbow drop to create separation and build momentum. Juice takes him off his feet with a sliding dropkick, followed by a DDT. Juice falls for a number of distractions from ringside, allowing Gallows to hit another big boot. Gallows puts him away with a chokeslam sitout powerbomb for the win.

Knockouts Champion Deonna Purrazzo is sneaking out of the building when she’s approached by Scott D’Amore. Apparently, Purrazzo never requested the #1 contenders match between Rosemary and Havok. D’Amore makes the match official for next week with the winner earning a Knockouts Title shot at Under Siege.

New Japan Pro Wrestling’s El Phantasmo makes his highly-anticipated IMPACT debut against newcomer, VSK. The bells sounds and VSK is off to a hot start. Phantasmo gains control with a springboard crossbody, followed by a Moonsault. VSK hits a running boot in the corner before dropping Phantasmo on his his head for two. Phantasmo connects with his signature Sudden Death superkick to win as the referee questions whether or not his boot was loaded.

On a night of firsts, Rachael Ellering makes her IMPACT singles debut against Kiera Hogan before the two teams collide in a Knockouts Tag Title rematch at Under Siege. Ellering hits a series of running strikes, culminating with a senton for two. Hogan comes right back with a vicious running dropkick of her own. Ellering puts her rival away with a big swinging slam for three.

Don Callis confronts Moose just moments before his qualifying match against James Storm. Callis questions why IMPACT management is putting him on the same level as other members of the IMPACT roster, suggesting that a five star athlete like himself shouldn’t have to qualify for anything.

.@TheMooseNation doesn’t have any interest in what @TheDonCallis has to say, he just plans to send a message in the main event. #IMPACTonAXSTV pic.twitter.com/7jL9gKbWeY

Tasha Steelz calls Knockouts Tag Team Champions Jordynne Grace a non-factor, which leads to Grace challenging her to a singles match next week.

Next Thursday at 8/7c on AXS TV, don’t miss the final episode of IMPACT! before Under Siege. Havok battles Rosemary with the winner facing Deonna Purrazzo for the Knockouts Title at Under Siege. Petey Williams, El Phantasmo, Rohit Raju, Ace Austin, Acey Romero and TJP compete in an X-Division Scramble to determine Josh Alexander’s challenger for the X-Division Title at Under Siege. Plus, Karl Anderson takes on David Finlay and more.

Who will be the final competitor to qualify for the 6-Way #1 Contenders match? Chris Sabin does not accompany Storm to ringside as he has prior engagements in Swinger’s Palace. Moose blocks the signature kick of Storm before cranking his leg against the ropes. Moose targets the knee with repeated stomps on the floor. Moose is in total control, having completely neutralized Storm’s offense. Moose charges into the corner and Storm sidesteps, giving him the separation he needs to catch his breath. Storm fights back with a Codebreaker, followed by a tornado DDT for two. Moose takes him out at the legs, then locks in a Half Boston Crab. Storm attempts Eye of the Storm but his leg can’t support the weight. Storm hits the Last Call superkick and it becomes apparent that he’s in tremendous pain. Referee Brian Hebner almost calls for the bell but Storm pleads with him not to. Moose connects with a thunderous Lights Out spear to put Storm away.

After the match, Moose sends a message to the entire IMPACT roster when he wraps Storm’s leg with a steel chair and stomps on it. Chris Sabin comes running to the ring but the damage has already been done as Moose retreats.