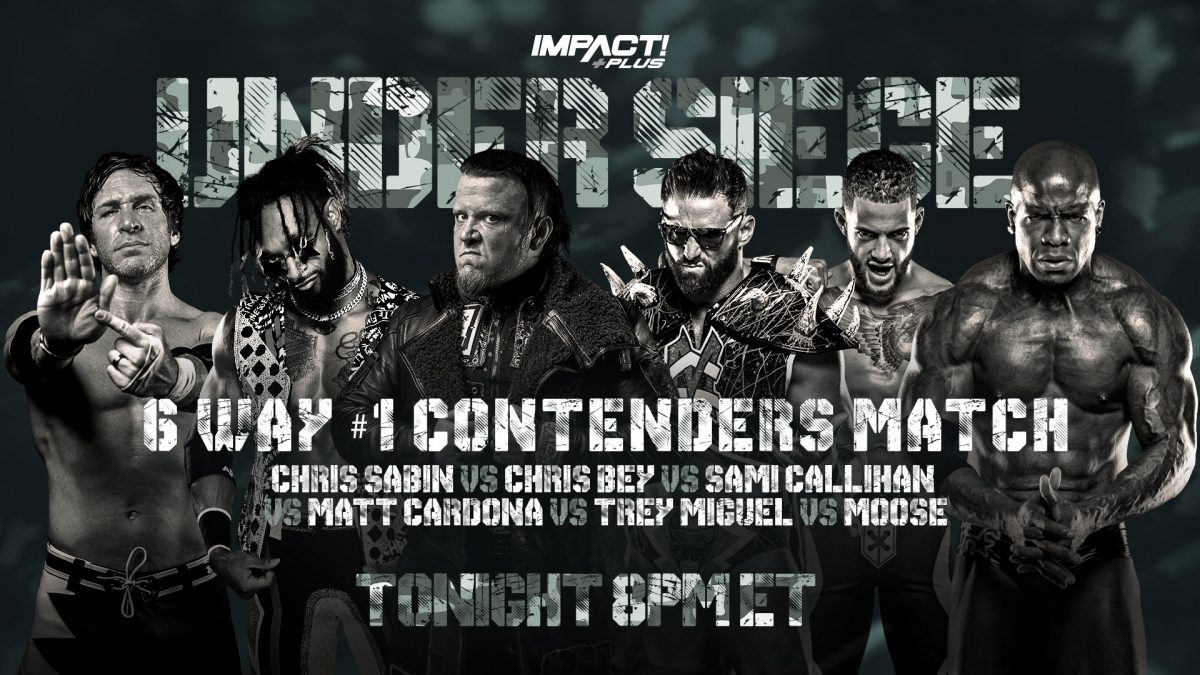 May 15, 2021
Nashville, TN
Results by ImpactWrestling.com

Taurus overpowers Myers in the opening moments of the match. Myers retreats to the floor where he punches Crazzy Steve. Taurus turns his attention to Steve, allowing Myers to attack him from behind and gain control. Taurus hits a step-up shoulder block to create separation! Taurus builds momentum with a Crucifix Bomb for two. Myers hits the Flatliner for a near fall of his own. Myers delivers a thumb to the eye, followed by the Roster Cut to win.

Taylor Wilde and Tenille Dashwood put their differences aside as they join forces for tag team action. Taylor and Tenille are working in tandem as they hit in-sync double underhook slams! Susan picks Tenille off the apron, allowing Kimber to gain control. Tenille hits a jawbreaker and makes the tag to Taylor who quickens the pace. Susan connects with a Superplex but the referee catches her with her feet on the ropes. Kaleb With a K kicks Susan from ringside. Taylor capitalizes with a German suplex to score the victory!

Sami Callihan declares that he’s going to win the 6-Way #1 Contenders match tonight and go on to defeat Kenny Omega for the IMPACT World Championship. Callihan makes a strong statement when he says “I am Don Callis’ biggest fear.”

“I am @TheDonCallis‘ biggest fear.”

Fulton jump-starts the match by charging towards his opponents before the opening bell. Petey traps Rohit in the Tree of Woe as he sings the Canadian National Anthem! Rohit and Shera double team Petey until he’s able to shift the momentum with a swinging neckbreaker. TJP sets up for his running boot but Shera clotheslines him from the apron. Fulton holds TJP while Ace takes him out with a springboard legdrop. Petey attempts the Canadian Destroyer on Ace but Fulton breaks it up. XXXL send Petey crashing to the mat with a thunderous double shoulder tackle. Rohit gets sandwiched between Larry and Romero! Fulton takes out Larry with a modified Black Hole Slam, followed by a splash from Ace for three.

Two of the most athletic big men in Professional Wrestling collide right here, right now. Willie kicks things off with a burst of intensity as he swarms Morrissey in the corner. Morrissey gains his composure and knocks Willie to the mat with a shoulder tackle. Morrissey sends Willie crashing to the floor with a vicious running boot. The fight spills to the outside where Morrisey drives him into the steel guardrail. Morrissey repeatedly drops his elbow into the unprotected neck of Willie. The tide begins to turn when Willie connects with a top rope clothesline but Morrissey kicks out at one! Morrissey regains control with the East River Crossing, then kicks Willie in the back of the head to score the pinfall.

After the match, Morrissey continues his beatdown on a helpless Willie Mack when Rich Swann makes his shocking return and send sends Morrissey retreating!

Kiera and Tasha attack the champs from behind but end up paying for it as Jordynne and Rachael use their strength advantage to quickly gain control. Kiera ducks Ellering, then hits a neckbreaker to build momentum. Kiera holds Ellering in the corner as Tasha pummels her with repeated strikes. Fire ‘N Flava hit a double team foot stomp neckbreaker off the top. Jordynne is becoming increasingly angry as Fire ‘N Flava continue to break the rules in order to prevent Ellering from making the tag. Kiera’s showboating comes back to haunt her as it allows Ellering to create separation and make the tag to Jordynne. The champs almost retain their titles after Jordynne connects with multiple sitdown powerslams on Tasha! Jordynne and Ellering collide with each other after some miscommunication. A fast-paced flurry of action leads to a stalemate with all four competitors down! Kiera counters the Vader Bomb from Jordynne. While Kiera has a hold of Jordynne, Ellering grabs her leg, causing Kiera to snap Jordynne’s head over the top rope. Kiera takes out Ellering with Sliced Bread on the floor! Tasha hits Jordynne with a Frog Splash and we have new Knockouts Tag Team Champions!

After an altercation inside Swinger’s Palace, Hernandez escorts XXXL out of the casino!

Alexander has the early advantage with his amateur wrestling skill set. Phantasmo takes Alexander off his feet with a running knee, followed by a straight elbow to the chin. Alexander catches Phantasmo in mid-air, the drops him to the mat with a powerslam. Alexander hits a strong backbreaker for two. Phantasmo walks the ropes, then connects with a Hurricanrana for a near fall. Phantasmo puts his arrogance on display as he steps on Alexander and poses in the corner. Alexander picks him off the top with a modified German suplex. Phantasmo walks the ropes once again but this time, Alexander drops him to the mat from his shoulders! Both men exchange strikes in the middle of the ring, culminating with a big boot from Alexander. Phantasmo hits a spinning neckbreaker for another near fall. Phantasmo counters the neckbreaker into a rollup with a handful of tights! Alexander kicks out at two, then connects with his signature running crossbody on the apron. Phantasmo hits a top rope Hurricanrana, followed by a Frog Splash but it’s not enough to keep the champ down. After several attempts, Alexander successfully locks in the ankle lock to win by submission!

“If anybody plans to take IMPACT from me, it’s going to be over my dead body.” @TheEddieEdwards thinks FinJuice handle business with respect – unlike @KennyOmegamanX. #UnderSiege @THEdavidfinlay pic.twitter.com/wDX72USSHk

Deonna attempts to take Havok off her feet with a pair of bicycle kicks but to no avail. Havok asserts her will when she tosses Deonna halfway across the ring. Havok goes for her running corner boot but Kimber pulls her to safety from ringside. The distraction allows Deonna to target the arm and take control. Deonna sidesteps a charging Havok, causing her to collide shoulder-first with the steel ring post. Havok hits a two-handed Chokeslam, then locks in a Boston Crab! Havok knocks Kimber and Susan off the apron, then fights off a Fujiwara Armbar attempt. Deonna counters a running boot into a Fujiwara Armbar, forcing Havok to submit.

Tonight’s double main event kicks off with a star-studded six-man tag featuring competitors from IMPACT Wrestling, All Elite Wrestling and New Japan Pro-Wrestling! Omega and Eddie exchange as Eddie takes advantage with an overhead belly-to-belly suplex! FinJuice hit a double running bulldog to Omega. Anderson inadvertently hits Gallows on the floor but Omega doesn’t allow Juice to gain any momentum as he connects with a sliding dropkick. Finlay enters the match with a burst of speed, taking out Anderson with a jumping European uppercut. Omega picks the leg of Finlay from the outside, allowing Anderson to regain control. Finlay takes Gallows off his feet with a jumping crossbody, then makes the tag to Eddie. Omega meets him in the middle of the ring and it’s on! Eddie hits a Blue Thunder Bomb for two. Amidst the rising chaos, Eddie hits Omega with a double underhook powerbomb for another near fall! Omega connects with the V-Trigger on Juice, then a snap Dragon suplex on Eddie. The match erupts into an all-out brawl with competitors coming from every angle! Eddie hits the Boston Knee Party on Anderson to score the huge win!

Who will be Kenny Omega’s first challenger for the IMPACT World Title? We’re about to find out in our Under Siege main event! All six competitors square off in an impromptu gauntlet style showdown as they jockey for position. Callihan hits Trey with the Death Valley Driver. Cardona sends Moose back-first into the steel guardrail with a basement dropkick. Trey and Bey hit stereo Tope Con Hilo dives, colliding with everyone on the floor. Bey is trapped in the Tree of Woe but ends up sending Callihan and Cardona for a ride! Miguel goes coast-to-coast, delivering a dropkick to the jaw of Bey. Moose hits his signature delayed dropkick on Sabin. Moose hits a thunderous Superplex on Trey but gets caught with Bey’s Frog Splash from the other corner! Callihan breaks the count with a chair, then hits an Exploder suplex on Bey! Sabin connects with a DDT Flatliner combo to both Callihan and Cardona. Cardona hits Moose with Radio Silence but Callihan goes low on Cardona just seconds later! Callihan goes for the Package Piledriver on Cardona when he’s jumped by The Good Brothers! It looks as though Sabin has the match won with the Cradle Shock but Moose pulls the referee off the count. Moose targets the surgically repaired knee of Sabin, then hits the Spear to win the match and become the new #1 contender!

Moose celebrates in the ring and sends a message to Kenny Omega, “I’m coming to take back what’s ours!”. Under Siege goes off the air.