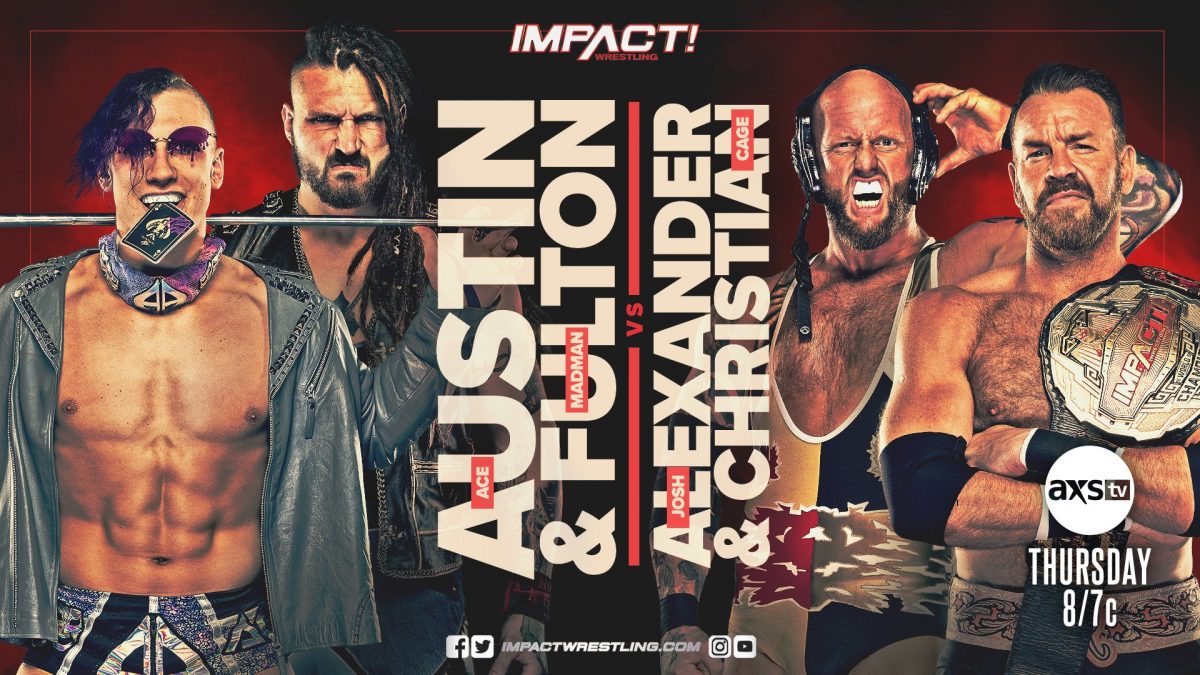 Behind the Impact Exclusive
Matthew Rehwoldt vs. Laredo Kid

Before tonight’s all-new IMPACT! on AXS TV, the action began on BTI with an exclusive match between Matthew Rehwoldt and Laredo Kid!

Laredo gains the early advantage with a tilt-a-whirl head scissors, sending Rehwoldt to the outside. Laredo dives through the ropes but Rehwoldt catches him in mid-air and connects with a neckbreaker on the floor. Rehwoldt hits a running uppercut in the corner for two. Laredo begins to build momentum with a springboard Moonsault, followed by two step-up twisting Moonsaults. Rehwoldt avoids his next attempt at aerial offense, following up with a fireman’s carry spinebuster for two. Both men are jockeying for position on the top rope when Laredo sends Rehwoldt flying with a Spanish Fly to win!

.@DashingChrisBey scores the win with the Art of Finesse (following a low blow by @elpwrestling). #IMPACTonAXSTV pic.twitter.com/gN4Jvm0mYZ

The war between Bullet Club and FinJuice continues, this time with the addition of two high-flying, highly-skilled athletes in El Phantasmo and Chris Sabin! The Good Brothers are seen watching the match from their hotel room as they prepare to defend the IMPACT World Tag Team Titles against either the Bullet Club or FinJuice at Bound For Glory. The Bullet Club begin to wear Juice down as they cut off the ring and prevent him from making the tag. Juice counters a vertical suplex from Hikuleo to create separation. Finlay tags himself in and quickens the pace, catching Bey in mid-air with a backbreaker. Sabin hits a double crossbody to Bey and Phantasmo, followed by a step-up DDT. Sabin, Finlay and Robinson soar through the air with triple dives to the floor. Hikuleo hits a massive Chokeslam on Sabin for a very close near fall. Hikuleo distracts the referee, allowing Phantasmo to go low on Sabin. Bey hits The Art of Finesse to win!

.@Christian4Peeps is going to have a front row seat to what he’s going to have to deal with at #BoundForGlory when @Walking_Weapon deals with @The_Ace_Austin and @FultonWorld in our main event. #IMPACTonAXSTV pic.twitter.com/BMd7GDCp4X

Josh Alexander says that IMPACT World Champion Christian Cage will find out what’s going to happen to him at Bound For Glory when they team up against Ace Austin and Madman Fulton in the main event. Opponents at Bound For Glory, partners tonight!

After making his surprise return last week, Heath is in the ring to address the situation with his longtime friend, Rhino. Heath says that he didn’t hear from Rhino while he was injured for the past year and he believes it’s because of what Violent By Design has done to him. Heath calls out Rhino to get to the bottom of it when Violent By Design interrupts. Eric Young says the Rhino that Heath used to know is dead. Young tells Heath to leave his ring – or else. Heath doesn’t back down, leading to a 3-on-1 attack from VBD. Young cracks the VBD flag over the back of Heath as Rhino is nowhere to be found.

Gia Miller interviews Willie Mack ahead of his X-Division Championship Tournament match next week against Rohit Raju and El Phantasmo. Zicky Dice and Manny Lemons of The Learning Tree barge onto the set and take credit for Willie Mack and Rich Swann’s victory over Brian Myers and VSK. Rich challenges them to a tag team match tonight but Dice and Lemons later learn that Myers and VSK won’t be at ringside.

We get a preview of things to come in this Saturday’s Knockouts Knockdown Tournament as Mercedes Martinez makes her IMPACT in-ring debut!

Tasha hits Brandi with a running kick for two. Tasha and Savannah employ quick tags to continue the assault in the corner. Brandi begins to fight back, cr eating separation with a clothesline. Brandi makes the tag to her fellow Undead Bridesmaid, Kimber Lee, who goes on the attack. Tasha and Savannah refuse to tag in Martinez so she gets involved illegally and takes out Kimber with a double underhook suplex. Martinez goes for the pin but she’s not the legal competitor. Instead, Tasha rolls up Kimber to steal the victory from Martinez!

After the match, Alisha attacks the Undead Bridesmaids with Kendra the kendo stick. This comes after Kimber Lee and Brandi Lauren abducted one of the Swingerellas just a few weeks ago!

Reigning Knockouts Tag Team Champions Havok and Rosemary hijack the latest edition of Tenille Dashwood’s All About Me, featuring The Influence! This Saturday at Knockouts Knockdown, Decay will defend their titles against Tenille Dashwood and Madison Rayne.

The alliance of @TheMooseNation and @TheCaZXL have entered the Call Your Shot Gauntlet and plan to duke it out between themselves when they reach the final two. #IMPACTonAXSTV pic.twitter.com/L7L4eqrmJ0

After sending Sami Callihan and Eddie Edwards to the hospital, Moose and W. Morrissey declare their entry into the Call Your Shot Gauntlet at Bound For Glory.

The tournament to crown a new X-Division Champion continues as these three men look to join Trey Miguel in the finals at Bound For Glory! Maclin jumpstarts the match by going after both of his opponents in the opening seconds. Taurus builds momentum with a Slingblade, followed by a pump-handle backbreaker. Petey hits Taurus with a dropkick to the back of the neck. Petey hits Maclin with a slingshot Hurricanrana on the floor. Maclin gains control with an Olympic Slam to Petey. Following a flurry of offense from Petey, Maclin counters the Canadian Destroyer but gets spiked with a DDT instead. Taurus soars through the air, hitting Petey with a step-up headbutt. Petey hits the Canadian Destroyer on Taurus but Maclin capitalizes with Mayhem For All to win!

.@facdaniels is back in IMPACT to right the wrong of never winning the IMPACT World Championship. #IMPACTonAXSTV @Christian4Peeps pic.twitter.com/ndRvJ5hBfs

Christopher Daniels tells Christian Cage that he’s back in IMPACT Wrestling to challenge for the World Title!

After being shut down by IMPACT Executive Vice President Scott D’Amore last week, Swinger’s Palace is closing for good.

Zicky and Manny try to gain the early advantage by attacking them before the opening bell but Rich and Willie quickly turn the tide. Rich and Willie hit a double team bulldog on Zicky. Willie “squeezes the lemon” as he targets Manny’s chest in the corner. Rich and Willie make quick work of The Learning Tree, connecting with an elevated neckbreaker on Manny to win.

.@ScottDAmore has instituted a no contact clause between @MickieJames and @DeonnaPurrazzo from now until #BoundForGlory!

Plus @DeonnaPurrazzo and @MickieJames will pick each other’s poison – starting with Deonna facing an opponent of Mickie’s choosing at #KnockoutsKnockdown! pic.twitter.com/U4iYoWhsMb

Following Deonna Purrazzo’s attack at Mickie James’ home last week, Mickie retaliates by attacking Deonna backstage at the IMPACT Zone! Scott D’Amore announces that a no contact clause between the two Knockouts is now in place. If Mickie puts her hands on Deonna, she will lose her Knockouts Title opportunity at Bound For Glory. If Deonna puts her hands on Mickie, she will be stripped of the Knockouts Championship! Gail Kim says that both of them will be picking each other’s opponent in a Pick Your Poison series. This Saturday at Knockouts Knockdown, Deonna will face Mickie’s handpicked opponent!

Alexander hits Ace with a delayed vertical suplex. Fulton distracts Alexander from the apron, allowing Ace to gain the advantage with a superkick. Ace hits a pinpoint buzzsaw kick for two. Cage delivers a series of shots in the corner, followed by a reverse DDT. Fulton gets involved once again, providing Ace with another opportunity to take control. Fulton begins to wear Cage down, then cuts off the ring as Ace hits a superkick. Cage spears Ace in mid-air, allowing him to make the tag to Alexander. The speed and momentum are in Alexander’s favor as he picks Fulton up on his shoulders and slams him down to the mat. Alexander hits Fulton with one German suplex after the other but Fulton pulls him into the corner where he’s met with a springboard kick from Ace. Cage pushes Ace off the top rope, then sends Fulton crashing into the steel steps. Alexander hits Ace with the Chaos Theory suplex. Cage tags himself into the match and connects with the Killswitch to win!

After the match, Alexander confronts Cage for tagging himself into the match.