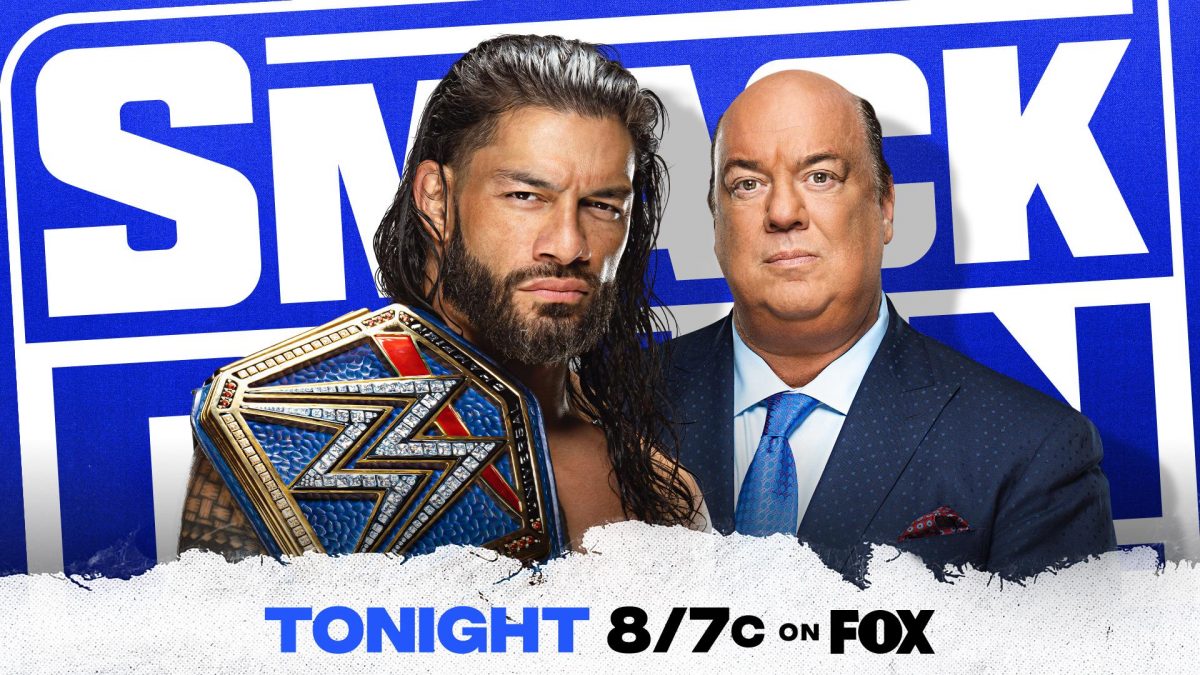 WWE SmackDown kicks off with Kayla Braxton in the ring. She says that rumors continue to heat up that Brock Lesnar’s suspension but as she is speaking, Roman’s music hits. Out he comes with Paul Heyman to the ring.

Heyman grabs the microphone from Kayla and tells her they don’t do rumors on the island of relevancy. He tells Kayla her problem is she parades around like she is a journalist but she knows how personal it is for Heyman and Roman. He tells her to speak facts next time she is in the presence of Roman Reigns. He says he used to like Kayla but instead of looking for sources, she is living her life through an Instagram filter. But there is no Instagram filter to be a legit journalist and until she is a journalist, she can leave the ring. He gives Roman the microphone.

Roman says rumors give losers false hope. He says he has defeated them all and Brock Lesnar is the number one loser. He says he beat him and it wasn’t even the best conditions. He flew all away around the world and beat him. He says Big E is also a loser because he beat him at Survivor Series. He says management is getting desperate, they have a Black Friday battle royal to determine the number one contender for the head of the table.

Reigns says they can leave four people win tonight and he would still beat them all. And he can do that because he is the best of the best, he is the Universal champion, he is the head of the table, he is the tribal chief. He says the whole world will acknowledge him.

The bell rings and we are under way. Corbin with a right hand on Hardy. He throws him into the corner and goes for a splash but Jeff moves out of the way. An atomic drop by Hardy following by a drop kick. Corbin with a right hand and Madcap is tagged in. He runs to the ropes and a shoulder tackle knocks Jeff down. He runs to the ropes but Jeff with a hip toss. He goes for a cover but Madcap kicks out. Drew is tagged in as they double team him. Drew goes for the cover but Madcap kicks out. Drew throws Madcap in the corner and a chop to the chest.

Back from commercial, Corbin knocks Drew off the ring apron and throws Jeff in the corner. Madcap attacks Jeff as the referee is distracted. Madcap is tagged in. Madcap and Jeff with double clotheslines and both men are down. Drew and Corbin are tagged in. Drew with a clothesline. A belly to belly by Drew. In comes Madcap as Drew hits him with a neck breaker. Drew with a neck breaker on Corbin.

Kayla is backstage with Aliyah and in comes Heyman. He asks Kayla if she got any confirmation or denials on those rumors. He says that’s what she needs to do and there are no rumors about Brock Lesnar. He says Lesnar got himself intentionally suspended to leave WWE no options. He says Lesnar is hiding behind these suspensions because Brock Lesnar fears Roman Reigns. He tells her to call Brock Lesnar but he doesn’t have his new number and she doesn’t have his number. And from what he hears, if she doesn’t have any confirmation or denials by the end of the night, she is gone. But that is a rumor.

The bell rings and we are under way. Cesaro with a right hand and an uppercut. Cesaro with right hands as Sheamus distracts him and Ride drops Cesaro onto the turnbuckle. A rugby tackle by Holland onto Cesaro’s knee. A clothesline by Holland as he goes for the cover but Cesaro kicks out. A head lock by Ridge but followed by an underhook suplex.

Holland with a head lock. Right hands by Holland followed by a knee to the face. Holland with a right hand but Cesaro rolls Holland up and gets the pin.

Drew is backstage with Adam Pearce and Sonya Deville. He asks if he is in the Black Friday battle royal. They tell him they don’t have all of the names just yet.

The bell rings and we are under way. Angel with a drop kick as he pushes Rick to the outside. Tables full of food are at ring side. Boogs picks Angel up but Angel grabs the ropes and kicks Boogs down. He throws Boogs back into the ring. Angel with a dropkick followed by a head lock but Boogs gets out of it. He lifts Angel up and spins him around throwing hm around the ring.

Boogs with a gut wrench. Humberto on the ring apron but Boogs knocks him down. He lifts Angel up and power bombs him. He goes for the cover but Angel kicks out. Boogs grabs Angel but Humberto plays on Rick’s guitar. Nakamura trips Humberto up on the table and he falls through the table. Angel with a super kick followed by the wing clipper. He goes for the cover and gets the pin. 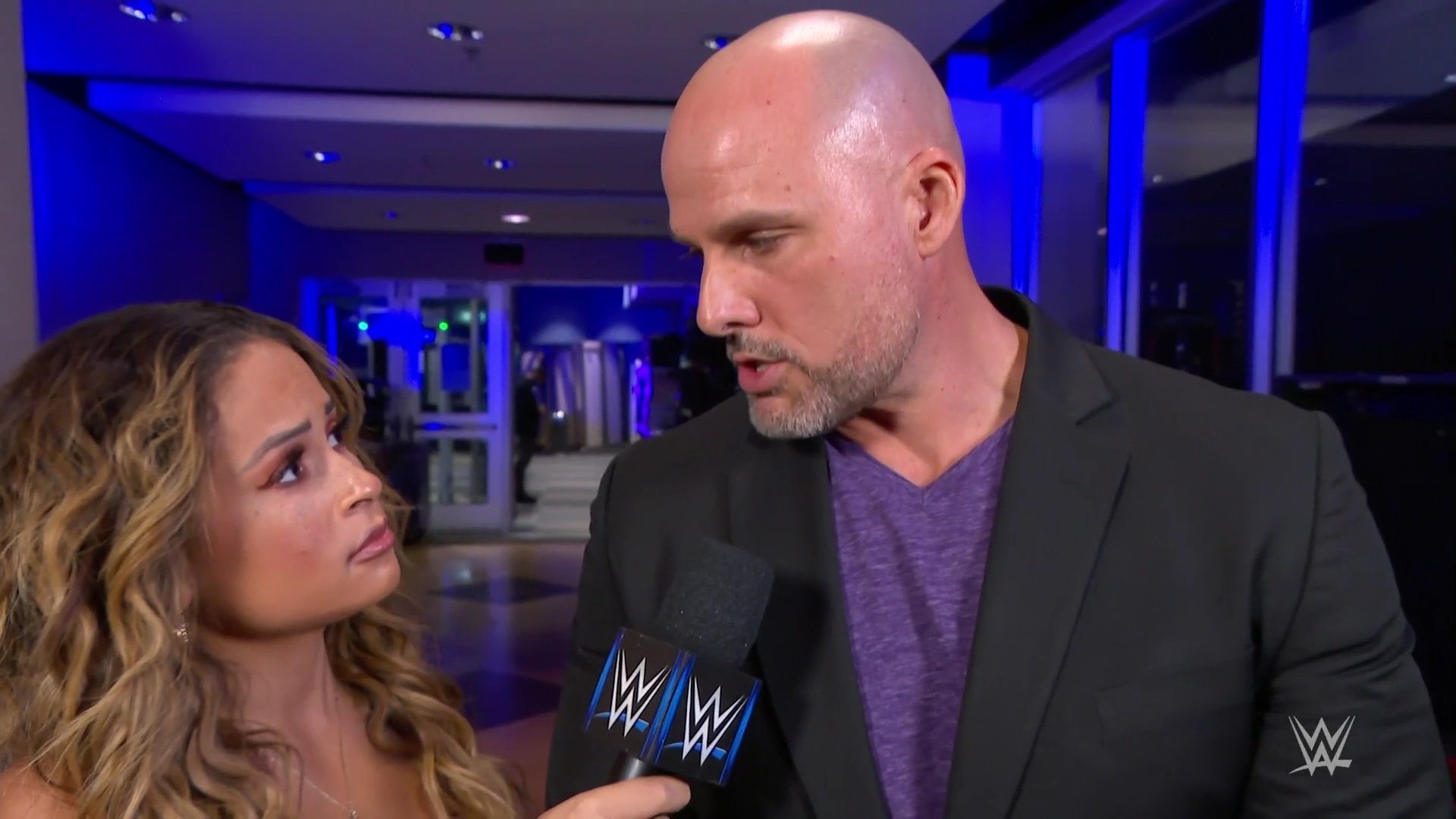 Kayla is backstage with Adam Pearce. He says he hasn’t heard anything about Brock’s suspension. He says Brock is a menace but he would be shocked if that suspension was lifted anytime soon.

Charlotte Flair is in the ring with Michael Cole. He says she must be disappointed about her loss against Becky Lynch at Survivor Series. She tells him the only thing she is disappointed about is the poor officiating in that match. She says everyone saw that the only way Becky can beat her is by cheating. She says Becky is not stronger than her and all that match proved was that Becky is everything she ever said she was. Becky knows that deep down, Charlotte is the better woman. And because of her, Becky’s success is thanks to her.

Cole asks what is in the near future for Charlotte. She says Becky can pretend to be Big Time Becks on Raw but in reality, she is still the most dominant woman in sports entertainment.

Out comes Toni Storm. She says Charlotte obsession with Becky made her lose. And what happens is that Charlotte will go after her because she was daring enough to stand up against her. She says she would make it easier for her, she is there. Charlotte says Toni thinks she was going after her but she barely knew she existed. And there’s a reason why she wipes her boots on the apron before getting into the ring and that is because there are levels to this and she is on a different level.

A clip from earlier during the show as they show Sasha backstage with Sonya. Sasha tells her she was captain at Survivor Series but she sabotaged it when she gave her a team full of traitors. Sasha says she blames Sonya. As captain, she should have been able to pick her own team and if Naomi was on her team, they would have won. She asks her what her problem with Naomi is. Sonya tells her to watch her tone and she lost. And she doesn’t have an issue with Naomi. Sasha asks Sonya if she is jealous of Naomi because she is more athletic, has more followers than her. She says Sonya has been downgraded to a suit. Sonya says she wears a suit and that makes her a boss. She says Sasha will team up with Naomi against Natalya and Shayna.

Several WWE superstars are backstage as there’s a paper with the names of all of the competitors who will be in the Black Friday Battle Royal. Drew looks at the list as Sheamus laughs and tells him he is not in the match.

Winner becomes the #1 contender for the WWE Universal Championship

Drew McIntyre is not in the match but out he comes to the ring with the sword. The superstars leave the ring and out comes Adam Pearce.

Back from commercial, the bell rings and we are under way. Michael Cole mentions that Drew has left the ring. They show Roman Reigns with Paul Heyman and The Usos watching the match backstage. Sami eliminates Drew Gulak. Sheamus and Holland eliminate Mansoor.

He celebrates on the second rope and Sami gets in the ring and eliminates Jeff Hardy.

There was no time for @SamiZayn to celebrate because @BrockLesnar returns NEXT FRIDAY on #SmackDown.

They show Roman Reigns, Paul Heyman and The Usos laughing backstage. Kayla gets in the ring and congratulates Zayn. Kayla gets a message in her ear piece saying that she just received breaking news. She says the suspension has been lifted and Brock Lesnar will be on SmackDown next week.

They show Roman Reigns, Paul Heyman and The Usos backstage. They look at Heyman.