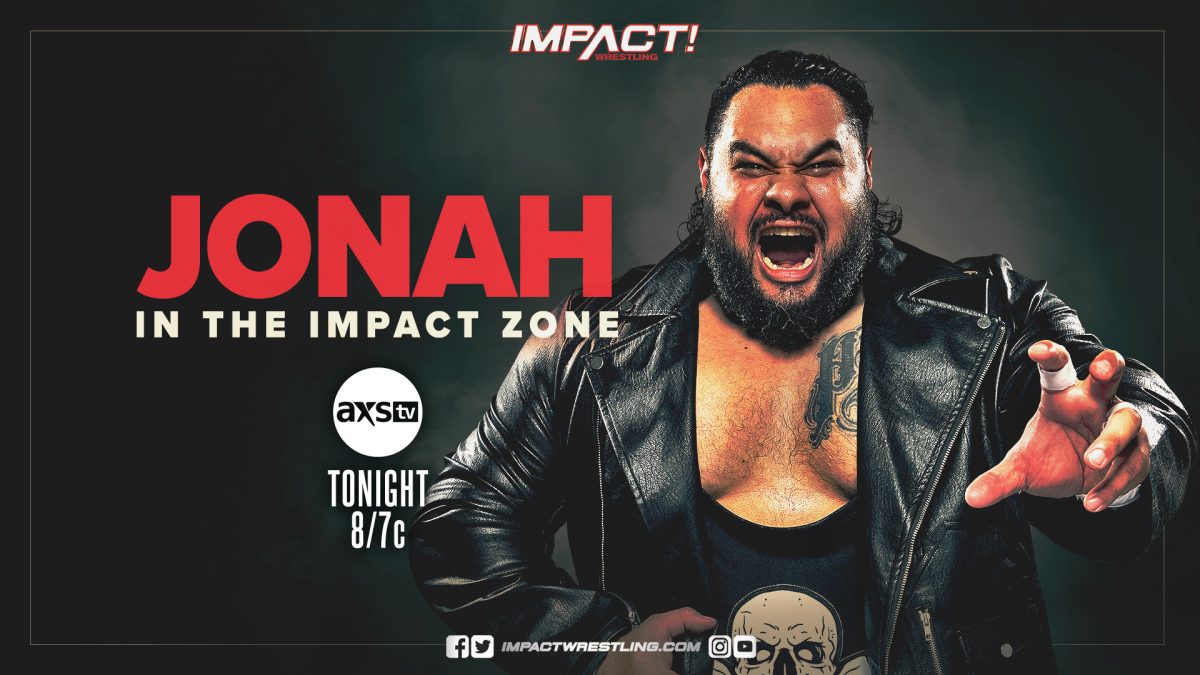 “You’re nothing but a mid-carder!”

Matt Cardona is in the ring to address his loss to W. Morrissey at Turning Point. Cardona says that he had Morrissey beat until Moose got involved and speared him while the referee was down. Cardona calls out Moose because the only reason he’s here is to become the IMPACT World Champion. Speaking of the champ, Moose interrupts and confronts him face-to-face. Moose tells Cardona that he’ll never be a top guy in this business and asks if he really wants to step in the ring with the “Wrestling God”. Moose calls him a mid-carder and Cardona explodes, taking out Moose with a flurry of offense. W. Morrissey blindsides Cardona and he falls victim to the numbers game. Moments later, Eddie Edwards makes the save as he and Cardona send Moose and Morrissey retreating up the ramp!

Violent By Design claim that Rich Swann and Willie Mack are standing in their way of claiming the power and control they crave.

IMPACT Digital Media Champion Jordynne Grace, Rachael Ellering, Tasha Steelz and Savannah Evans all want in the first-ever Knockouts Ultimate X match at Hard To Kill! D’Amore says that the six competitors will be announced next week but for tonight, Ellering and Evans will settle their business in a singles match!

Matthew Rehwoldt looks to understand the art of Chris Sabin by going one-on-one with him right here, right now! Deonna Purrazzo joins Matt Striker and D’Lo Brown on commentary as she reveals that she’s going back to her roots as a Fujiwara specialist in order to reclaim the Knockouts World Championship. Sabin hits a top rope crossbody in the early going. Rehwoldt sends Sabin flying from the apron to the floor to swing the momentum in his favor. Rehwoldt hits a pendulum elbow drop for two. Sabin quickens the pace, connecting with a tornado DDT out of the corner. Both men are down following a double clothesline. Purrazzo leaves commentary and confronts Sabin on the apron. Rehwoldt capitalizes off the distraction with the End Scene. Knockouts World Champion Mickie James makes her way to ringside where she brawls with Purrazzo and drives her into the steel ring post. In the ring, Sabin connects with the Cradle Shock to win!

Chelsea Green and Alisha are eager to compete in the first-ever Knockouts Ultimate X match at Hard To Kill.

After being decimated by Eric Young a few weeks ago, Jai Vidal begs Scott D’Amore for another opportunity, claiming that he’s “Hard To Kill”. D’Amore tells him that he has a match up next – against JONAH!

After destroying Josh Alexander at Turning Point, JONAH makes his IMPACT in-ring debut against Jai Vidal! JONAH quickly takes control with a delayed vertical suplex, followed by a jumping senton. JONAH flattens Vidal with a huge splash off the top rope to win!

After the match, JONAH gets on the mic and calls himself the “Top Dog”. JONAH recalls confronting IMPACT World Champion Moose at New Japan Pro Wrestling in San Jose and says that he deserves to be the champion. JONAH sends a verbal message to Josh Alexander and says that if he wants to be next in line for a title shot, he needs to go through the “Top Dog”!

Gia Miller interviews X-Division Champion Trey Miguel following his victory over Laredo Kid and Steve Maclin at Turning Point. Even though he won the match, he’s disappointed that he didn’t pin Maclin and end his undefeated streak in the process. Maclin blindsides Trey and a huge brawl breaks out. Security gets involved but Trey takes out everyone by launching himself off a raised platform!

VSK and Zicky Dice FaceTime Brian Myers and vow to right the wrong of VSK’s loss to Rich Swann at Turning Point – in a tag team match against FinJuice!

Moose convinces W. Morrissey to help him take out Matt Cardona tonight in exchange for an IMPACT World Title opportunity.

Rachael Ellering looks to even the score with Savannah Evans in this heated rematch! Ellering builds momentum with a running shoulder tackle but Savannah shuts her down with a bridged suplex. Savannah remains in control with a butterfly suplex. Savannah blocks the springboard leg drop as Jordynne gives Ellering some words of encouragement. Ellering begins to fight back with a series of strikes, followed by three running sentons. Tasha gets involved but Ellering makes her pay with a clothesline. Moments later, Ellering hits the fireman’s carry cutter on Savannah to win!

Tenille Dashwood is back from a trip around the world and The Influence is whole again. Madison Rayne tells her that The IInspiration became the new Knockouts World Tag Team Champions while she was gone. Dashwood storms off in search of her fellow Australians. The IInspiration is thrilled to see her and the two groups hit it off.

Rich Swann and Willie Mack seek revenge on their longtime rivals, Violent By Design! Rich and Willie hit Deaner with a flapjack bulldog. Doering takes out Willie with a running shoulder tackle from behind. Willie gets caught with a sidewalk slam from Doering, followed by a top rope headbutt from Deaner. Willie hits Deaner with a pop-up forearm to create separation and make the tag to Rich! The pace quickens as Rich connects with a handspring cutter on Deaner. Willie hits a Samoan Drop on Deaner as Rich follows up with the 450 Splash to win!

Post-match, Violent By Design attack Rich and Willie but Rhino and Heath make the save!

Rohit Raju and Raj Singh confront Johnny Swinger and Hernandez after they weren’t invited to Wrestle House. Lawrence D interrupts and as Lord of the Manner, tells Rohit that he didn’t want all of that riff-raff in his home. Lawrence challenges Rohit to a match next week!

The road to Hard To Kill continues on an all-new IMPACT! next Thursday at 8/7c on AXS TV and 8:30pm ET on YouTube for IMPACT Insiders! Knockouts World Champion Mickie James and Chris Sabin battle Deonna Purrazzo and Matthew Rehwoldt, Knockouts World Tag Team Champions The IInspiration team with The Influence to take on Decay, Eric Young collides with Rhino in a Street Fight and more.

It’s main event time as four of IMPACT’s top stars collide in a star-studded tag team match! Moose distracts Cardona from the apron, allowing Morrissey to capitalize with a sidewalk slam. Cardona counters a powerbomb attempt and makes the tag to Eddie. Moose gets involved once again and Morrissey sends him flying from the top rope to the floor. Moose and Morrissey hit a double Irish whip to Eddie as they cut off the ring ring and begin to wear him down. Eddie is about to make the tag when Moose pulls Cardona off the apron. Eddie finally fights off Moose, allowing him to tag in an enraged Cardona. Moose gets caught with a Reboot but Morrissey breaks the pin. It’s a stalemate after a flurry of kicks takes out everyone. Eddie dives through the ropes, colliding with Morrissey on the outside. In the ring, Cardona rolls up Moose to score the pinfall victory!

After the match, Morrissey lays out Moose with a big boot and stands over top of him as IMPACT! goes off the air.