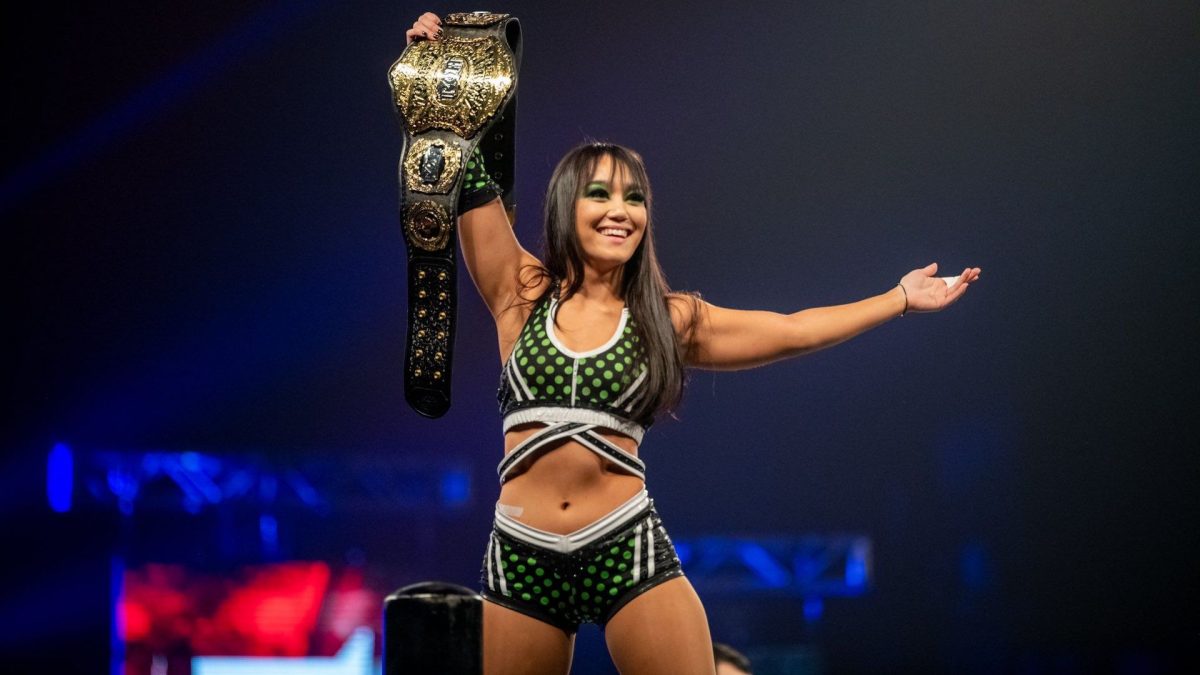 It was reported that their sources stated that there has been a “significant push” by several WWE officials to sign Rok-C to a potential contract with the company. This push reportedly started before Rok-C was invited to recent tryouts, which she was stated to have performed well at.

One source spoken to at WWE’s Performance Center stated that her match against Deonna Purrazzo on the January 9th episode of Impact Wrestling’s Impact! was being used as an example of why signing her would be a “no brainer” for the company. This same source also mentioned that they thought Wheeler Yuta was a no-brainer signing as well last year and that ended up not happening.

A recent episode of the Oral Sessions with Renee Paquette had former WWE talent Summer Rae as the guest. One of the topics discussed included Rae’s thoughts on the process leading up to her announcement for this year’s Women’s Royal Rumble match.

“When they called me about Rumble and stuff, at first they were like, ‘would you be interested? Would you even consider it?’ That was like the second thing that I said, ‘Oh, I’m red-headed now.’ I guess Sasha has every hair color under the world and [Naomi], but I think I look extremely different and some people don’t even recognize me, especially on socials. John Cone was like, ‘Johnny [John Laurinaitis] and I, will bring it up to Vince.’ I remember saying it in front of my sister and she was like, ‘Don’t use it as an excuse.’ ‘It’s not an excuse. I can’t just show up like this and Vince see me and be like who the hell is that?’

There were no rumblings ever. October (2017) was when I left, but then I hadn’t wrestled the year before. So, I had just crossed over four years gone, but five and a half years since a match. I was never out and injured, I just started to kind of speak up after this live event match and went to a doctor, went to another doctor, and I never really knew. I was like, ‘that’ll be cool to go to the Rumble and have a last match and be present in that moment and aware of what is happening. No one had called or texted.’ I remember at the beginning of the pandemic, living close (to WWE Headquarters) and then the pandemic hit. (Mark) Carano and (John) Cone would always message me ‘Happy Birthday’ and I never burned a bridge, but I also don’t have access to Vince.

I went to Tenille’s [Tenille Dashwood] show with IMPACT in Vegas and the dirtsheets picked that up, ‘she’s going there,’ no, it was just coincidental, I just happened to go to the show. I guess I could have sat in the back, but I wanted to see her. I’m packing for Abu Dhabi and 9 at night and I see Cone’s name on my phone and I went, ‘Whaaaat.’ You just know. I picked up the phone and went, ‘What do you want? It’s been four and a half years.’ ‘Well, we have you on our list of potential girls and wanted to get your interest.’ I honestly didn’t get my hopes up. I just said, ‘that’s flattering and cool, of course.’ The Rumble was always my favorite pay-per-view, that or Money in the Bank and of course Mania everyone loves. All my friends love the Rumble. They were like, ‘you probably won’t find out until the New Year.’ Five days later he called me and was like, ‘Merry Christmas. We have an answer with you, it’s yes.’ I was with Tenille. In my head I’m thinking, ‘What moves do I do? What’s my entrance? Do I tell? Do I not tell?’ Tenille was so happy for me. I was [so happy] but also processing it. ‘Do they know I have red hair?’ ‘Yeah, Johnny loves it. Vince thinks it’s cool.’ I didn’t even ask who else was in (in the Rumble), I just hung up.”

Rae also gave her thoughts about WWE’s decision to spoil her surprise appearance for the match ahead of time.

“Then they called me last Friday and said, ‘Vince wants to announce a couple of people tonight and he’s thinking about announcing you. Just a heads up, your socials are going to surge.’ I’m thinking, ‘I haven’t told any of my best friends. I’m going to look like such a bad person.’ I hadn’t told anyone because I didn’t want anyone to ruin the surprise. When it happened, I was a little taken aback, ‘That stinks, it was supposed to be a surprise.’ Also, in my head, I was like, ‘I’m going to use this to market the crap out of me and what I’m doing.’ When I’m in the gym it’s ‘Road to Rumble,’ I can reignite my beef with Nattie. Bayley wrote me and started putting me over. I talked to a bunch of the girls and they were like, ‘it’s an insane match to put together. Everything changes until the moment you walk out.’ How is that even possible? I have no ego and feel I’m easy to work with and think producers have a time with the matches with the personalities and egos and getting your shit in. I would love to have a Total Divas moment and maybe a spot with Nattie and then wave to my friends.”

Dave Meltzer reported in a recent episode of the Wrestling Observer Radio that this past Monday’s episode of RAW drew the second lowest paid attendance for a WWE main roster show since this past summer.

Meltzer reported that the total paid attendance for this week’s RAW show in Tulsa, Oklahoma was a little over 3,000. This reportedly would put it only behind the October 11, 2021 episode that was held in San Francisco, California for the lowest paid attendance for a WWE show since the company’s return to live touring this past July.