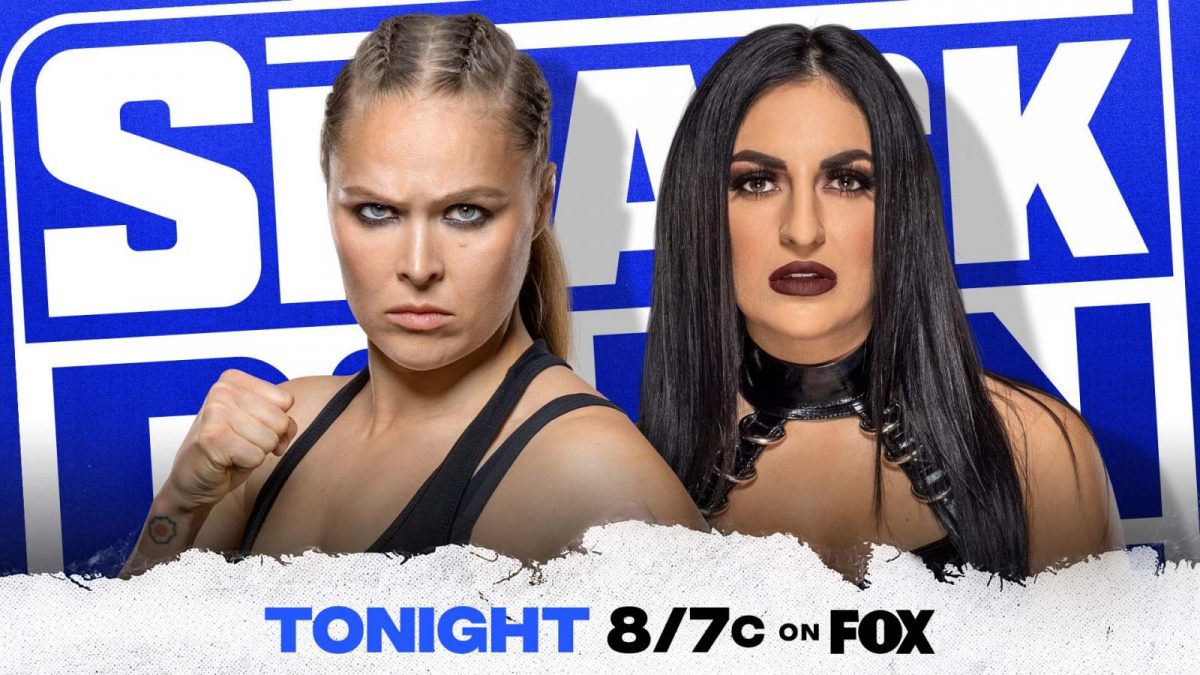 The bell rings and we are under way. Ricochet rolls Zayn but Zayn kicks out. Ricochet with a head scissor take down followed by a drop kick. Ricochet on the ring apron as he jumps off the top rope, Zayn moves out of the way and Zayn with a clothesline. He goes for the cover but Ricochet kicks out. Forearms to the face by Zayn. Right hands by Zayn and Ricochet with right hands.

Johnny Knoxville’s music hits and out he comes. He walks down to the ring as Zayn gets in the ring. Knoxville gets on the ring apron and distracts Zayn. Ricochet with a roll up cover as he gets the pin.

Out comes Austin Theory to the ring. He says he competes on Raw and he is the prodigy of the chairman of the WWE. He says Mr. McMahon is there tonight and where Mr. McMahon goes, Austin Theory goes. He asks Pat McAfee why Mr. McMahon was on his show. He says that Mr. McMahon is always one step ahead and Pat probably thinks Vince likes him but everyone knows that Pat is a loud mouth and everyone wants to hear him shut up.

Theory says that is entertainment. He asks Pat what he is going to do when his mouth is wired shut and he can’t eat without sipping his food through a straw. Theory goes to the outside and tells Pat that he is his opponent at WrestleMania. He slaps the headset off Pat’s head.

Pat climbs the announce table as Theory takes a bunch of selfies.

The bell rings and we are under way. Carmella goes to the outside of the ring as her assistants put her mask on for her. She gets on the ring apron and Naomi with a kick to the side of the head. Naomi climbs the top rope but Carmella trips her up. Carmella with a head lock.

Naomi with elbows as she gets out of it. She lifts Carmella on her shoulders and slams her knee first onto her face. Naomi goes for the cover but Carmella kicks out. Naomi goes to throw Carmella into the corner but Carmella reverses it and Naomi is slammed into the corner. Vega gets on the ring apron as Sasha trips her up. Sasha with the meteora onto the ring steps. Carmella runs towards Naomi but Naomi with a kick to the face. Naomi with a split legged moonsault. She goes for the cover and gets the pin.

They cut backstage and Happy Corbin and Madcap are playing poker with a few people. Corbin says they are going to watch Drew McIntyre’s match tonight.

The bell rings and we are under way. Jinder with a right hand followed by a head lock. Jinder throws Drew to the ropes but Drew with a shoulder tackle. A chop to the chest by Drew as he goes for another one but Jinder moves out of the way and a kick to the face. Jnder goes for the cover but Drew kicks out. Jinder with a modified head lock as he runs to the ropes but Drew with an over head throw.

A swinging neck breaker by Jinder. Shanky gets on the ring apron as Jinder throws him face first into the ring post. McIntyre with the Glasgow Kiss onto Jinder. Drew with the Claymore. He goes for the cover and gets the pin.

Kayla gets in the ring as she asks Drew about Madcap and Corbin. Drew says he doesn’t care what Madcap and Corbin think, no on cares what they think. Drew says no one likes them. He asks the crowd who wants to gauge their eyes out when Corbin is on television. Kayla raises her hand too. Drew tells Corbin he might be undefeated as Happy Corbin but that will end at WrestleMania.

We cut backstage to Corbin and Madcap playing poker. Madcap tells a bad joke about Drew and no one laughs.

Rick Boogs is playing the guitar as he introduces Shinsuke Nakamura. The Usos attack them from behind on the stage. Roman’s music hits and out he comes to the ring.

Roman tells Miami to acknowledge him. The fans cheer. Roman says tomorrow, he and Brock Lesnar will defend their titles at Madison Square Garden. He says he will destroy his opponent and send him to the back of the line. But Brock is where it gets interesting. He says not everyone wants to see Brock with that title or even make it to WrestleMania.

He says at WrestleMania, Brock Lesnar will acknowledge him.

Kofi is on the ATV at ring side ringing the horn. Ridge Holland hits him with a chair from behind. Holland starts breaking the ATV with the chair. Sheamus with right hands a knee to the face onto Big E. Sheamus goes to the outside of the ring as he and Holland get on the ATV. Sheamus drives away.

Back from commercial, they show Sheamus and Ridge Holland breaking The New Day’s ATV outside of the arena.

Kayla is backstage with Johnny Knoxville. He says that Zayn is a sad, strange, little man. He tells Zayn that getting in the ring with Zayn doesn’t scare him as he accepts his challenge for a match at WrestleMania.

Corbin and Madcap are backstage playing darts. A sword is shoved into the dart board as Drew McIntyre enters the locker room and everyone leaves.

Charlotte Flair makes her way down to the ring before the start of the match. The bell rings and we are under way. Ronda has tape on her right knee. A slap by Ronda followed by a kick. Ronda with a take down as she goes for an arm bar. Flair gets on the ring apron and distracts Ronda. Sonya with a chop to Ronda’s right knee. Flair joins the commentary team. Sonya slams Ronda’s head into the mat.

After the match, Flair takes her head set off and stands up. Flair gets in the ring and Ronda takes her down and gets her in an ankle lock and Charlotte taps.