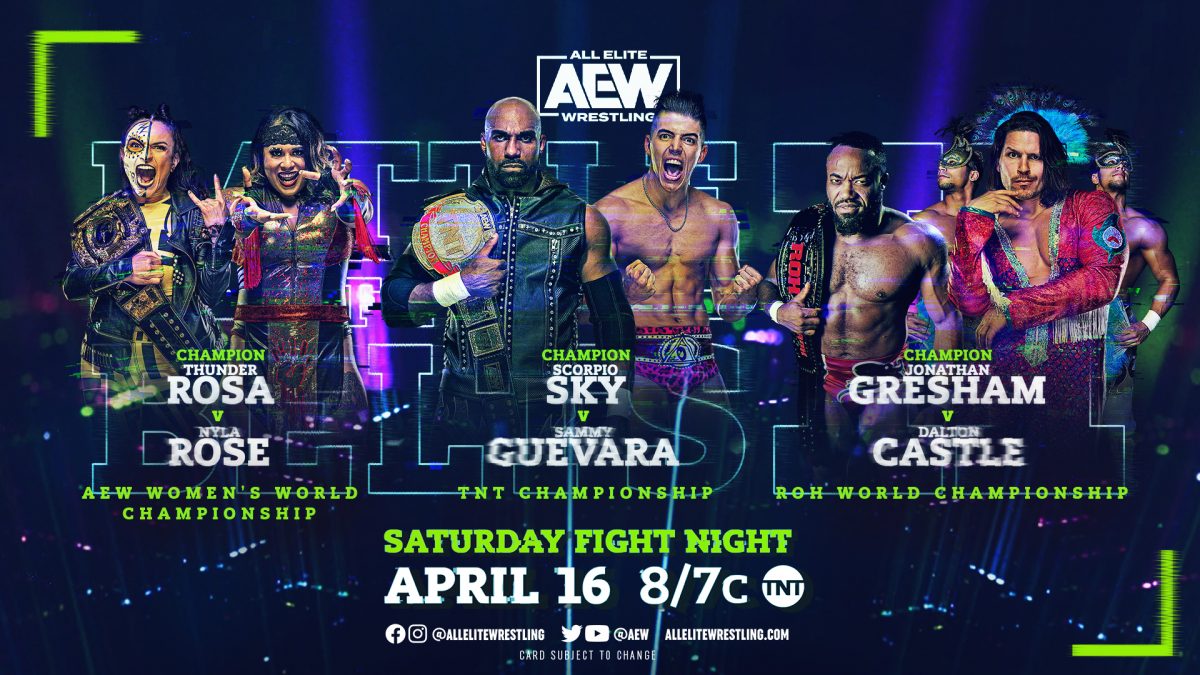 The second ever AEW Battle of the Belts special event kicks off with an elaborate cold open video package and theme song.

Ring announcer Justin Roberts handles the formal ring introduction of the challenger, Sammy Guevara. “The Spanish God” makes his way down to the ring accompanied by Tay Conti.

Next out is the current title-holder, Scorpio Sky, who heads to the ring along with DAn Lambert. Ethan Page came out with him and then went to the back.

Both guys are in the ring and our opening contest is now officially off-and-running, as the bell sounds to get our first of three title matches started.

Guevara works over Sky coming out of the gate, however Sky counters by taking him down and passing to side mount where he begins hammering down with ground and pound.

We see Sky remain in control of the offense for another moment or so before Guevara recovers and begins taking over.

The fans break out in some dueling chants as we see camera shots of Tay Conti and Dan Lambert watching on from ringside.

As Guevara goes for another spot while Sky is on the ropes, he stops to taunt Lambert outside the ring down below. This leads to Sky taking over on offense.

Sky works over Guevara a bit more but then the action spills out to the floor where “The Spanish God” starts to dominate once again until Sky drops him throat-first across the steel ring barricade.

We see Guevara recover and hit a big moonsault onto Sky after leaping off the top of the steel ring steps. His offensive run from there doesn’t last much longer, as Sky ends up connecting with his finisher on the floor.

After he hits it, we head to a mid-match commercial break as the action continues. When we return from the break, we see Sky still in control of the offense with complete ease.

Guevara remains on the defensive for a few minutes and then starts to fight from underneath, making his fired up comeback.

He hits a Spanish Fly on Sky to slow him down and the crowd starts rallying behind him as he strings together some fast-paced offense.

He heads up to the top-rope with intentions of finishing this one off, however Ethan Page runs down and pulls Sky out of the ring so there is nothing for Guevara to hit.

After pulling Sky out to the floor, over comes Tay Conti from ringside and the two yell in each other’s faces like a pissed off baseball player and an umpire.

Guevara notices this and decides to leap off the top-rope to the floor, splashing onto Sky and Page both in the process. He brings the action back into the ring and looks to hoist Sky up for a big spot.

Instead, Dan Lambert hops on the ring apron for the distraction. As this is happening, Conti runs over and pushes Sky, allowing Guevara to attempt a pin, which only gets two.

Moments later, we hear a loud pop from the crowd and notice Paige VanZant is running down from the back. The two crash to the floor and roll around in cat-fight fashion.

Meanwhile, back in the ring while the referee is distracted, he hits Sky with a low blow and then hits his GTH finisher for the pin fall victory.

We have a new TNT Champion. Sammy Guevara once again captures the title. After the match, we see Guevara and Conti celebrating and then we head to another commercial break.

We return from the break to the ROH ring announcer inside the squared circle after some quick pre-taped promos from the two competitors involved in our next match.

The ring announcer introduces the challenger, Dalton Castle, who makes his grand entrance accompanied by “The Boys.” He settles in the ring as the commentary trio sings the praises of the ROH performer.

With the challenger in the ring, his music dies down and then the theme for the defending title-holder hits. On that note, Jonathan Gresham makes his way out for his scheduled title defense.

Both guys are in the ring and the bell sounds to get our second of three title matches off-and-running. The two shake hands in trademark ROH fashion before getting after it.

We see the two exchange some early back-and-forth action and Castle then decides to head out to the floor to re-group while “The Boys” fan him off a bit.

Castle re-enters the ring and starts to display some impressive offense. He hits a gut-wrench on Gresham that he switches from side-to-side before dropping Gresham on his head.

The commentators react to Gresham being dumped on his head in scary fashion. The referee checks on him, however he is fine and he pops up and the two start to engage again.

Gresham comes off the middle rope with a nice move on Castle and then hits a couple of dropkicks to different parts of Castle’s body. From there, Excalibur talks us into a mid-match commercial break as the match continues.

We see some back-and-forth action when we return from the break and then business picks up as Castle hoists Sky up for his Bang-a-rang finisher.

Seconds later, we see Gresham avoid a big spot from Castle. He responds by locking him in his Octopus hold. He drops down to the mat with it and cranks back on the arm, forcing the tap from Castle. Great match.

Once the match ends, we hear Jay Lethal’s theme and out he comes accompanied by Satnam Singh and Sonjay Dutt.

Singh takes out “The Boys” at ringside with double chokeslams. Still in the ring by himself is ROH World Champion Jonathan Gresham.

The aforementioned trio enters the ring and while two provide distractions, Lethal jumps in from behind with his Lethal Injection finisher.

From there, Matt Sydal tries to run in to make the save, however the numbers game ends up being too much for him as well.

As the multi-person beatdown continues, we hear Samoa Joe’s theme music. He comes down to the ring to a huge pop while carrying his title and a lead pipe. Joe hits the ring but the heels head for higher ground, as they exit the ring and avoid any involvement with Joe, opting instead to head to the back.

We return from the break to some pre-taped promos from Thunder Rosa and Nyla Rose, as we get ready for our main event — the third and final championship match of the evening here on the second-ever AEW Battle of the Belts special event on TNT.

After the promos, we head back inside the Curtis Culwell Center where Nyla Rose’s theme hits. Rose makes her way down covered in war-paint on her face.

Upon settling into the ring, her music dies down. The challenger now watches as the theme for the reigning champion, Thunder Rosa, hits.

Rosa makes her way down to the ring and the two stare each other down. The bell sounds and we’re off-and-running with the Rose-Rosa main event.

Rose jumps off into an early offensive lead, taking it to Rosa and dumping her out to the ringside area on the floor. She follows her out and continues to dominate the offense out there.

Rosa ends up leaping off the ring post for a big bulldog on Rose. She rolls into the ring to stop the referee’s count and then rolls back out. She grabs Rose and smashes her into the steel.

She rolls Rose back into the ring and then climbs to the top-rope. She connects with a big missile dropkick and goes for the cover. Rose kicks out at two.

From there, we see Rose take back over on offense. She rag-dolls Rosa around a bit and then the action spills out to the floor once again.

Once on the floor, Rose hits Rosa with a power bomb, slamming her down on the hard part of the ring apron in the process. After this, we head to a mid-match commercial break as our main event continues.

We return from the break and we see Rosa in the middle of an offensive comeback. She hits a big stunner that pops the crowd and then she builds up a head of steam before connecting with a big dropkick to Rose in the corner.

A follow-up dropkick sends Rose out to the floor. She hits the ropes and builds up a full head of steam again, this time connecting with a big dropkick that connects through the ropes onto Rose on the floor.

Back in the ring, Rosa hits a crazy Tor-knee-do high spot from the ropes to the floor. The crowd went nuts for this one. She rolls Rose back in the ring and heads to the top-rope.

She launches herself onto Rose, who uses her brute strength advantage to catch Rosa. She blasts Rosa with a knee to the back of the head that slows down the momentum that the champion had built up.

We see Rose lay Rosa across the top-rope and then she climbs up to the top in the corner and leaps off looking for a knee to the back of her head. Instead, Rosa moves. Rose goes for another spot but Rosa counters it into a Code Red for a near fall. Rose kicks out at two.

Rose hits Rosa with a chokeslam. She picks her up and sends her into the ropes, blasting her with a big clothesline when she comes off of them. She only gets two on another pin attempt, however.

Once again we see Rose hoist up Rosa for another big chokeslam. The two trade big spots back-and-forth again, each time attempting a pin attempt but only getting two.

Finally a simple hurricanrana into a pin attempt from Rosa scores the three-count for the champion. With the win, Thunder Rosa retains her gold.

The show goes off the air literally seconds later as Rosa celebrates with her title in the crowd while Excalibur runs down the lineup for next week’s AEW programming.