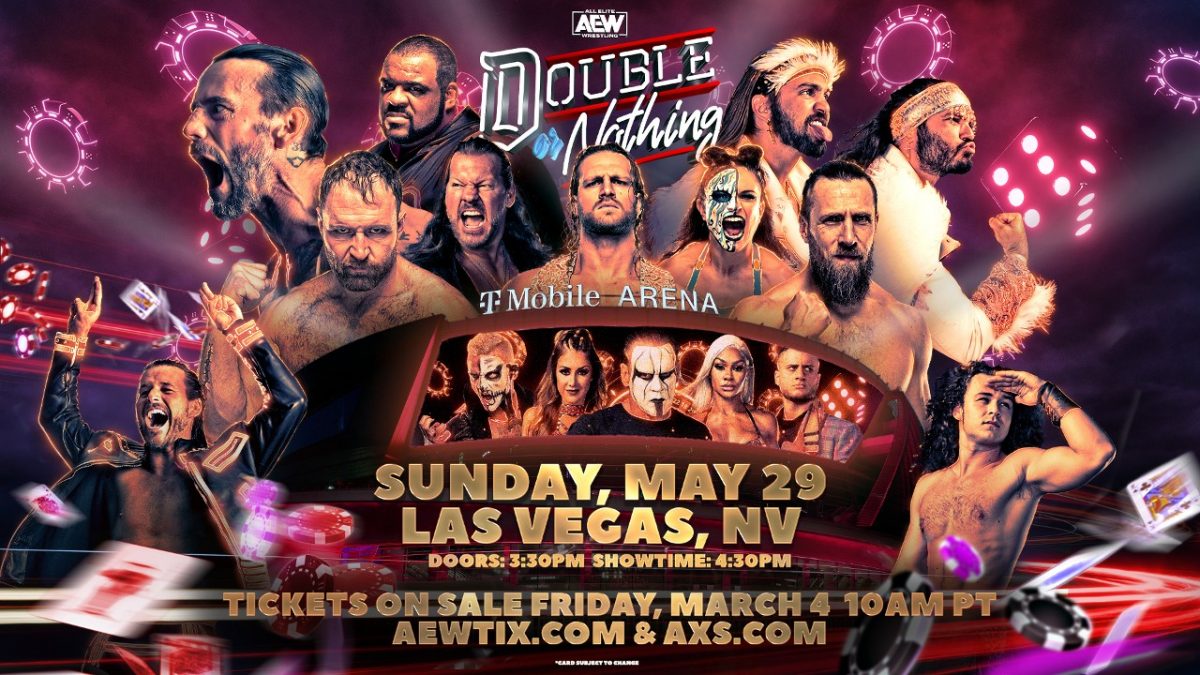 AEW CEO Tony Khan held a media call this past Thursday afternoon to promote this Sunday’s Double or Nothing 2022 event in Las Vegas, Nevada.

Some of the topics discussed included Khan’s thoughts on MJF’s current status in the company and him being vocal over his contract pay issues. Khan stated that he does not mind when real life issues are played out in storylines in AEW since he feels wrestling thrives when it can meet real life on-screen.

“Wrestling thrives when real life meets on-screen. The real-life conflict is often just as exciting as any conflict on-screen, which is one of the good things about what AEW has brought to the wrestling business. There was no real, major free agent market with the top stars crossing promotions, debuting, and frankly the competition needed to be brought to the biggest stage. With the 90s, we had TBS and TNT in the wrestling game. With the launch of AEW, we’ve been able to bring that back. Taking what is happening in real with potential movement and contract negotiations is exciting. Adding another element to what will be a very exciting match at Double or Nothing with Wardlow and MJF, who has been very vocal, not only about his own contract but about his former bodyguard and how he feels and he’s tried to hold down his career. For Wardlow, this is a huge opportunity to officially be part of AEW and to shed an image that he’s just MJF’s heavy and MJF’s thug. For MJF, it’s been a great opportunity to not only air some real-life grievances and air his actual status, contractually or otherwise. People are really excited about the fight at Double or Nothing on Sunday.”

On the topic of AEW’s working relationship with Warner Bros. Discovery going forward, Khan stated that they are featured in the best way possible on AEW shows. Khan also stated that they have received great feedback from Warner Bros Discovery officials and feels they will have a great working relationship going forward. Khan also stated that Warner Bros Discovery officials will be throwing a party for the company in Los Angeles next week as part of the celebrations for AEW’s debut in the city. Khan praised both AEW’s talent and fans for giving AEW a chance to survive and thrive as a company.

On the topic of the upcoming CM Punk vs. Hangman Adam Page match for the AEW World Championship and Punk’s work in AEW, Khan stated:

“CM Punk has come in so far and had a great series of matches with wrestlers of all different experience levels. Against younger wrestlers who, even for their age, have tons of experience like Daniel Garcia and Darby Allin, but also some of the great veterans along the way and people who are a mix of the two. MJF is another person who has a ton of experience for his age and I believe the people who have wrestled CM Punk, no matter the result, so far, have come out for the better have reached a bigger audience and have learned in the process. CM Punk is somebody who, continuously, surprises me and amazes me. He helped grow our business when he arrived here and that in particular helped put a spotlight on the young wrestlers, but he’s also been a really good mentor backstage, in addition to just helping people’s wallets, potentially, by getting everybody in a better position in this company by helping us get more fans, selling more pay-per-views and more merchandise, he’s been that guy, but he’s also been somebody that will help mentor wrestlers and will watch matches after the fact, matches they’ve had with him or other people.

A number of people will watch all their matches with CM Punk. He’s been a great mentor to a lot of men and women in our locker room. He brings a mindset of giving back, in particular to the younger wrestlers, but also somebody who has done a lot for the veteran wrestlers here. In doing so, he’s wrestled a lot of matches, he’s won a lot of matches, he’s helped us by not only being a great mentor, but by being involved in really compelling television that has helped AEW a lot, including his program with MJF that is probably one of the most personal rivalries ever in pro wrestling in terms of how strong the build was, how much you really wanted to see their pay-per-view match, the intensity between them. CM Punk has helped everybody in AEW so far. As to how he can do that as champion, we’ll see going into the pay-per-view if that’ll happen, but right now we have the greatest champion in pro wrestling.”

On the topic of AEW’s attempts to grab more people into becoming fans of the company, Khan stated that the best thing they have been able to do is to see the year to year growth of their AEW PPV buy rate numbers. He stated that his current goal is for AEW to be the place for young wrestlers to grow and develop while also being an attractive spot for veteran wrestlers. Khan also stated that AEW has the potential to enter new television markets and secure a new streaming deal as a way to boost revenues and interest for the company.

On the topic of his recent purchase of Ring of Honor, Khan stated:

“I just jumped on it, honestly, me personally. It was a unique opportunity. I was on the phone and I heard that if I paid a certain price, I could buy Ring of Honor then and there. I didn’t want to complicate it or make it any more difficult than it was going to be. I said, ‘I’ll do it,’ right then and there. It’s easy for me to do that. I didn’t have to go through any….the way I looked at is at the time was; the price was right, the opportunity was right, and I was looking out for AEW. I’m always thinking of AEW. In doing so, this transaction makes sense for Ring of Honor to be its own brand and stand on its own feet. I’m not saying Ring of Honor is a subsidiary of AEW or secondary in any way.

That’s one of the things that made Ring of Honor Supercard a really compelling event because you didn’t feel like it was a developmental show or a secondary show. You had great matches, it was a well-received card, one of the best reviewed shows of the year, critically. Commercially, it was a massive success. Is Ring of Honor as big as AEW right now? No. Is it selling as many pay-per-views? No, but that was incredible growth for Ring of Honor, a company that has over 20 years of history now and has sold a ton of pay-per-views over the years and that was, in all the shows they’ve promoted, one of the biggest Ring of Honor shows. It was the biggest show, by far, in years. When we get all the final numbers in and it’s all said and done, it’s going to be 20 times or more the recent Ring of Honor pay-per-views. 20 times as many people watching. We’ve been able to rebuild or get Ring of Honor to a stronger place than it’s been in many many years. I don’t see it as a secondary or subsidiary thing. It’s a separate, standalone thing, it’s one of the most important wrestling companies in the world. At the time, I thought it would make sense to jump on it and I was thinking, me personally, it was a great move. Also, I want AEW and Ring of Honor to work together, but Ring of Honor isn’t supposed to be working for AEW. They are their own two promotions and they’re both going to be very strong with great champions and I’ll operate them separately. One thing that has been great since the sale is having some of the top stars in Ring of Honor wrestle in AEW, including having the Ring of Honor World Television Champion Samoa Joe involved in the Owen Hart Tournament and in the finals against one of the biggest wrestlers in the world Adam Cole.”

On the topic of potential plans for AEW to hold shows in Canada, Khan stated that it is something he wants to do in the future. Khan stated that the COVID-19 pandemic ended up causing a delay to their travel plans and they are only now entering new markets they had originally planned to do so in 2020.

On the topic of a potential timetable for ROH’s return to live events and television, Khan stated:

“We’re still working on that. It’s an exciting time in media. It’s big for AEW that we’ve gotten some very kind interest and are being hosted in Los Angeles by the biggest content creators in the world, Warner Brothers Discovery, our great media partner. That is great conversation that I have had with them and will continue to have with them about what could potentially be a future for Ring of Honor, in conjunction with a future of things we can do to expand the AEW audience and expand the ways we deliver AEW content to our fans, in addition to all the awesome shows we have now with Dynamite on TBS and Rampage and Battle of the Belts on TNT. I would love to get Ring of Honor weekly TV series or streaming series, wherever it ends up going, very soon and it’s something I am working on and would be awesome for the fans. There is a lot of Ring of Honor fans around the world that can’t wait until the TV comes back. I’m hopeful we’ll have Ring of Honor TV and continue the great calendar of Ring of Honor pay-per-view events. I’d like to bring Ring of Honor back to pay-per-view and follow up on [Supercard of Honor]. We have great wrestlers in Ring of Honor and great champions. The company is in the strongest position it’s been in a long time or frankly, ever, with our love and support and the fact that I really care about Ring of Honor. Everything we’re doing to grow and nurture that business going forward, but also put my financial resources behind it and combining that with what I believe is some acumen for this business. I don’t know when the TV will start back up on a weekly basis, but that is my goal to get it going again and it’s something I’m working on.”

On the topic of the potential to introduce a Women’s Tag Team Championship in AEW in the future, Khan stated:

“Yeah, I have (thought about them). We have a lot of great wrestlers in AEW and a lot of great women’s and men’s wrestlers in AEW. I have thought about doing those and as we continue to expand the roster and hopefully get more teams and get some people who have been injury and on the shelf, back, that would be something I would love to do in the future. The trios belts would be something that I think the fans would enjoy and fans have called for, but I would love to add more titles and more champions as we go if they make sense and those are both cool ideas and stuff we’ve talked about.”