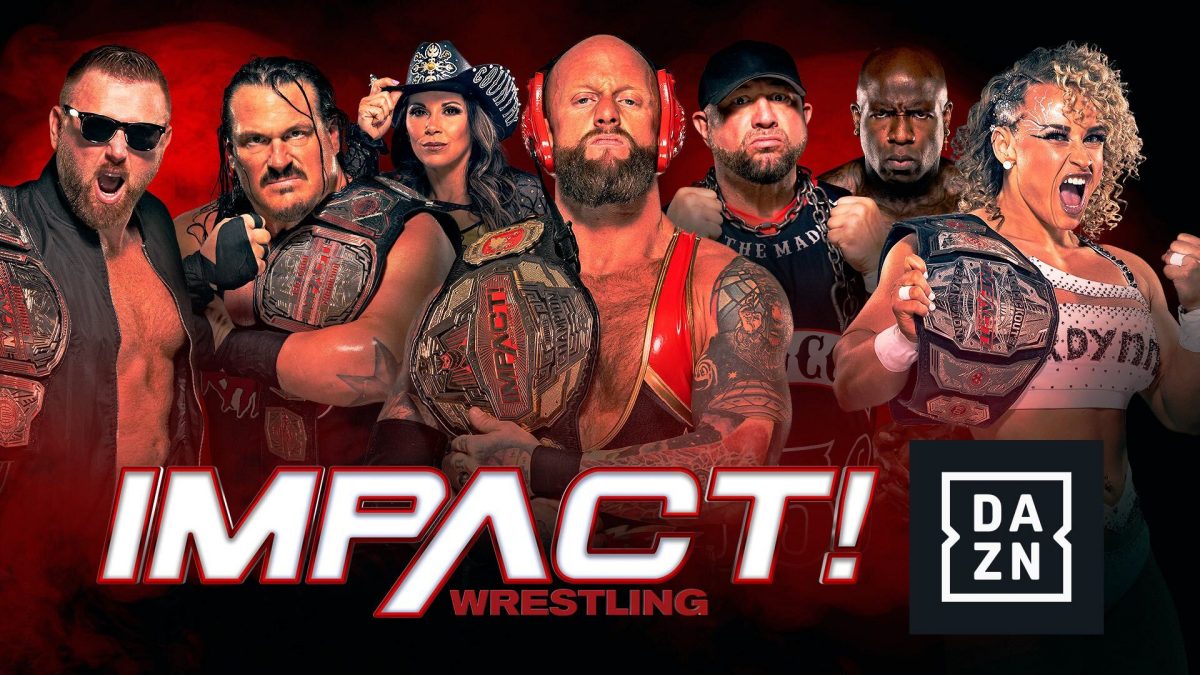 Impact Wrestling announced that they have recently signed a new multi-year international streaming deal with sports streaming service DAZN to air their Impact! television series, pay-per-view events, and content from their library on the service.

IMPACT’S Signature Series, PPV Events & Other Programming
To Be Televised By DAZN To More Than 170 Countries Beginning November 29

The multi-year agreement will give DAZN viewers in 170+ countries — including the UK, Ireland, Switzerland, Austria, France, Poland, Spain, Italy, the Netherlands, Japan, and Brazil — the best seat in the house to IMPACT Wrestling’s weekly IMPACT! flagship series, home to larger-than-life characters, high-stakes matchups and blockbuster drama.

Additionally, DAZN viewers will have access to IMPACT’s high-octane PPV events and premium IMPACT Plus live specials, as well as select titles from IMPACT Wrestling’s archives, directly through the DAZN platform.

DAZN can be accessed on Smart TVs, games consoles, Amazon Fire TV/Fire TV Stick, Google Chromecast and Apple TV, as well via the DAZN app on iPhone, iPad, android and other tablet and mobile devices. For all the ways to watch, please visit www.dazn.com.

“DAZN is a global leader in premier sports programming, and we are proud to partner with them as we expand IMPACT Wrestling’s international reach even further,” said Scott D’Amore, Executive Vice President, Anthem Sports Media Group. “From the beginning, IMPACT Wrestling has enjoyed a worldwide audience of passionate and knowledgeable fans who crave high-quality professional wrestling content. With this announcement, we hope to make it even more convenient for them to enjoy our flagship series, premium specials and pay-per-view events, while also introducing the IMPACT Wrestling brand to even more sports enthusiasts across the globe.”

Said Veronica Diquattro, CEO of DAZN Global Markets: “We are incredibly excited to sign this multi-year partnership with Impact. This deal will see the promotion’s world-class professional wrestling content arrive on the DAZN platform in more than 170 countries worldwide, reinforcing our growing position as the global home of combat sports.”

In addition to the aforementioned countries, IMPACT Wrestling programming is televised globally in 120 countries including on Anthem properties AXS TV in the US and Fight Network in Canada, as well as the Commonwealth Of Independent States, Latin America, Mexico, the United Kingdom, India and its subcontinent, and Africa.

A recent episode of the Ten Count podcast had Eric Bischoff as the guest. One of the topics discussed included Bischoff’s thoughts on the potential of CM Punk returning to WWE in the future.

“I’ve been around the business long enough not to make a prediction like that because anything can happen.”

“I don’t think it would be. I think CM Punk shit the bed. When Tony Khan brought CM Punk into AEW, he still had that mystique, the Pipe bomb mystique. He was this character that stood up to the man and walked away. There’s a rebel, rebellious quality in that character that I think the average American admires. So Punk had this mystique and still had his fanbase, and Tony Khan was able to take advantage of that. Over a very short period of time, that mystique began to just dissipate, it was like letting the air out of the ballon a little bit more each and every week. CM Punk came in and great ratings, and then, literally, the next week, started in a free fall back down to pre-Punk levels. You look at where AEW is in terms of week-to-week ratings, which is the only thing that we can have to measure that’s public because the financial information is all private, and we don’t really hear anything about the real financial information. We just get the top line stuff. But ratings is the data that we have that we can go, ‘Oh, okay. This is where this product is going.’ Flat-lined shortly after CM Punk got there. Flat-lined to pre-Punk levels.

I think that a lot of that has to do with people came, they were excited because of the aura and the mystique, they saw, and they went, ‘Eh. Not so much. Little bit, but eh. Nothing special.’ Then for Punk to conduct himself in the manner in which he did I think left a bad taste in not only the fans’ mouths, but why would anybody wanna hire a guy that’s willing to publicly disparage the guy that’s writing him a check every week when he’s right next to you? Why would anybody want to be in business with that guy?”

Bischoff also gave his thoughts on how he would have handled CM Punk’s infamous rant incident at AEW’s All Out 2022 post-show media scrum and if he would hire Punk if he was in charge of WWE.

“Tony had a mic. He had his own mic. He could have grabbed that mic, stood up and said, ‘This conference is over. Thank you all very much. Shut down the audio.’ Boom, it’s over. Then sort it out. But to sit there and be thrashed and flayed like a fish by a guy that you’re writing a check to for more money, five times more money than he’s really worth, is mine-boggling to me. Again, I’m stubborn in some respects. I think the most important quality that anybody has in life is loyalty and integrity above talent, and if someone would be that disloyal and show that lack of integrity, I would never want to be in business with him. I don’t care how much money I could make because it’s gonna be a short-term win. You’re gonna win for a minute, and you’re gonna be sort. That’s been the pattern, hasn’t it? It’s a well-established pattern. So no, I wouldn’t hire him back.”

Pro Wrestling Guerilla recently announced that Kommander, Alex Shelley, and Jonathan Gresham are the next official entrants for next year’s Battle of Los Angeles tournament on January 7-8, 2023 in Los Angeles, California.

Joe Hendry reportedly is currently planned to defend his Impact Digital Media Championship at NORTH Wrestling’s Actually it’s Darkness event on December 2nd in Newcastle, England, according to Cultaholic. It was reported that Hendry’s opponent for this upcoming match is currently not known.

Sports streaming service DAZN announced that they have recently signed a deal with Prime Time Wrestling to air their events on their service until the end of 2023.

WWE Hall of Famer and current mayor of Knox County Glenn “Kane” Jacobs reportedly was recently involved in a lawsuit filed against him by a former county employee, according to KnoxNews.com. It was reported that this lawsuit revolved around unpaid work done at his house and the illegal use of a county-owned golf cart for this job. The lawsuit reportedly claimed that Jacobs had asked several county employees to work at his home to get rid of a snake in his backyard but wanted it done during their break time and not on county time, which was stated to have taken “two hours” to complete. This lawsuit reportedly also claimed that Jacobs pressured a county department head to lie to a state investigator over the illegal use of a county-owned golf cart for this job and yelled at this person when he would not cooperate with the demand. It was reported that the lawsuit was settled with the county agreeing to pay $150,000 to former Parks and Recreations Director Paul White, who was fired over his refusal to lie to investigators over the incident.

Game Changer Wrestling recently announced that El Hijo del Vikingo will be making an appearance for the company at their Til Infinity 2022 event on December 31st in Atlantic City, New Jersey.

Reality of Wrestling recently announced a new match for the card of their Christmas Chaos XVII event on December 18th in Texas City, Texas:

Major League Wrestling recently announced a new match for the card of their Blood & Thunder 2023 event on January 7, 2023 in Philadelphia, Pennsylvania:

Create A Pro Wrestling recently announced a new match for the card of their Holiday Toy Drive 2022 event on December 8th in Lynbrook, New York: