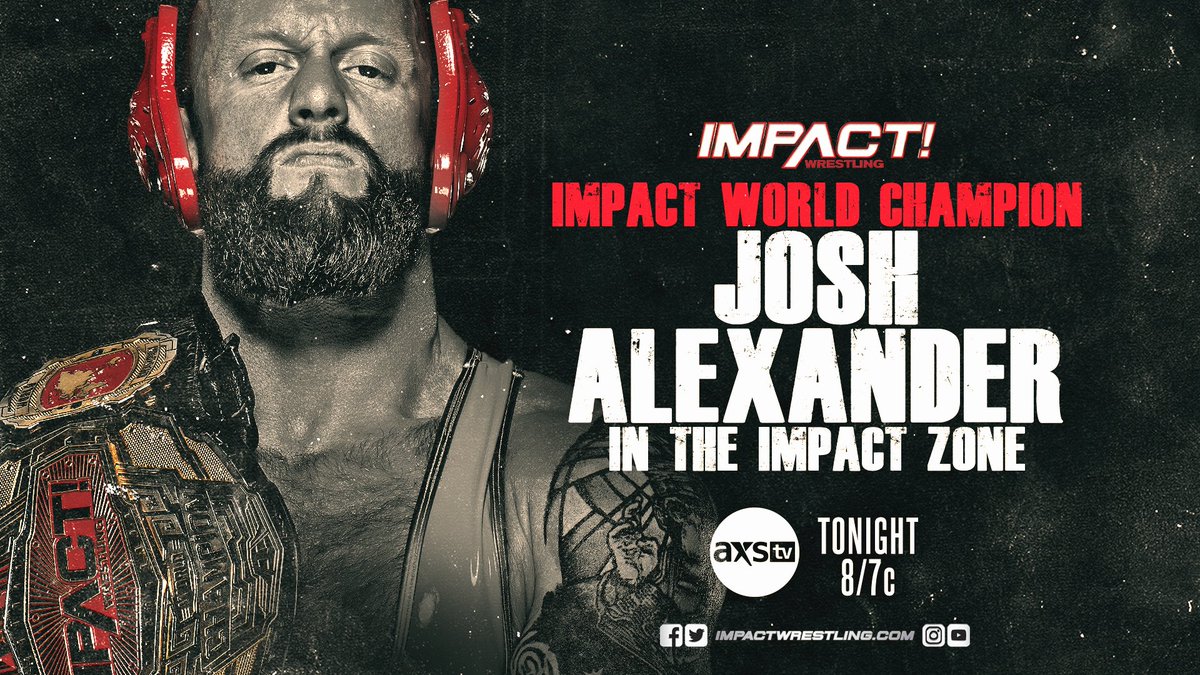 Cleansed in the blood of its designer, the movement has been reborn. Deaner, Angels and Kon appear in a dimly lit room. Deaner challenges Sami Callihan to step into the ring with Kon tonight and warns him to fear the evil he sees – the evil now known as The Design

The Motor City Machine Guns receive their long-awaited IMPACT World Tag Team Title opportunity against Heath and Rhino! Heath attempts to fight his way out of the Gun’s corner but Sabin hits a Dragon Screw leg whip from the apron to remain in control. Shelley locks in a Figure Four Leg Lock but Heath crawls to the ropes in order to break the submission. Heath creates separation with an explosive powerslam, allowing him to make the tag to Rhino. The pace quickens as Rhino hits Sabin with a Spinebuster. Shelley gets involved from the outside, allowing Sabin to capitalize. Sabin and Heath are exchanging strikes when the Major Players attack them from behind with a pair of Wake Up Calls.

The Major Players retreat up the ramp as they lay claim to the IMPACT World Tag Team Titles.

IMPACT World Champion Josh Alexander tells Executive Vice President Scott D’Amore that he’s going to handle things “his way” in regards to Bully Ray’s heinous attack on him and his wife at Over Drive.

Johnny Swinger confronts Scott D’Amore about receiving the title shot he claims to deserve. D’Amore tells Swinger that if he wins 50 matches, the title shot is all his.

Before they collide in a high-stakes Title vs Career match at Hard To Kill, Knockouts World Champion Jordynne Grace and Mickie James participate in a photo shoot. James says that she doesn’t want Grace to go easy on her, she wants to earn the Knockouts World Title. Grace tells James that she respects her enough to retire her.

Savannah Evans looks to teach Tasha Steelz a lesson by doing something that she was unable to do, defeat Knockouts World Tag Team Champion Taya Valkyrie! Valkyrie hits a thunderous spear but Evans avoids the follow-up offense. Valkyrie does the splits on the apron as Evans sends her crashing to the floor. Evans hits a butterfly suplex out of the corner. Valkyrie begins to build momentum with a Hurricanrana but Evans shuts her down with a big clothesline. Valkyrie comes back with a clothesline of her own, then hits a Blue Thunder Bomb for two. Evans counters the Road to Valhalla into a Full Nelson Slam for three!

Moose attacks Bhupinder Gujjar in the back and tells him to deliver a message to Digital Media Champion Joe Hendry, “it’s time to believe in Moose”.

.@ROHDelirious is on “another level” and has the chance to prove it against @TheEddieEdwards TONIGHT in our MAIN EVENT! #IMPACTonAXSTV pic.twitter.com/MIgaGIo5EF

Delirious lays out the challenge for a match with the former leader of Honor No More, Eddie Edwards. It’s made official for tonight’s main event!

After eliminating the sickness last week, Deaner leads Kon into battle against Sami Callihan! The early advantage goes to Kon as he runs through Callihan with a clothesline. Kon continues the assault with another clothesline in the corner, followed by a Spinebuster. Callihan creates separation with a jawbreaker, then begins to build momentum with a powerslam. Callihan takes the big man off his feet but Kon regains control as he chokeslams Callihan on the apron. Angels provides a distraction with a steel chair, allowing Deaner to attack Callihan. Kon hits the Death Valley Driver to win.

Josh Alexander is on his way to the ring. Tommy Dreamer tells him that he wants to talk but Alexander isn’t interested right now.

Earlier tonight on BTI, Trey Miguel defaced Jason Hotch just like he did to the X-Division Title. During an interview, Miguel threatens to spray paint Gia Miller when Crazzy Steve interrupts. Steve confronts him for cheating to defeat his partner, Black Taurus, in the finals of the X-Division Title Tournament. Steve considers himself an artist too, the only difference is that when he tags something, he does it with blood!

IMPACT World Champion Josh Alexander returns to the IMPACT Zone for the first time since Bully Ray’s heinous attack at Over Drive. Alexander says that he has received IMPACT management’s blessing to deal with things his way. Alexander lays out an open challenge for the IMPACT World Title and only wants one person to answer it – Bully Ray. Alexander pleads that if Bully loses tonight, he will still have another opportunity at Hard To Kill. Speak of the devil, Bully Ray appears on the screen but says he is too busy reliving Over Drive to answer his challenge tonight. Instead, Mike Bailey answers the open challenge and we have an impromptu IMPACT World Title match right here, right now!

Bailey soars over the top rope, colliding with Alexander on the floor. Alexander hits a strong backbreaker but Bailey quickly turns the tide with a dropkick. Bailey hits a running corkscrew for two. Alexander hits three German suplexes, trapping the arms on the pin attempt. Alexander locks in the Ankle Lock but Bailey fights out of it and begins to target his shoulder. Bailey spikes him with a Reverse Rana for another two count. Alexander goes for the C4 Spike but the damage has been done to the shoulder. Alexander catches him in mid-air with a forearm shiver. Alexander avoids Ultima Weapon but once again, his arm gives out on the C4 Spike attempt. Alexander goes for another C4 Spike but both men take a spill over the top rope to the floor. Bailey hits a springboard Moonsault, taking out Alexander on the outside. Alexander fights through the pain to lock in the Ankle Lock but Bailey breaks free. Both men exchange strikes in the middle of the ring as Bailey gains the upper-hand with a spin kick. Alexander dumps him on the hardest part of the ring as the match passes the 30 minute mark. Bailey counters a top rope Styles Clash but Alexander spins him down to the mat instead. Bailey connects with Ultima Weapon but is unable to capitalize due to the damage done to his knee. Bailey crashes and burns on a standing Moonsault as his knees are driven into the apron. Alexander hits his signature running crossbody, sending Bailey flying to the outside. They brawl to the top of the ramp where Bailey hits Moonsault double knees into the ribs of Alexander. Back in the ring, this match is now approaching 60 minutes. Bailey picks him off the top with a Hurricanrana, followed by Utlima Weapon but Alexander gets hit foot on the bottom rope. Alexander counters the Flamingo Driver into the Styles Clash. Alexander locks in another Ankle Lock, then spikes him with a Piledriver. Alexander successfully hits the C4 Spike, then connects with another one for good measure. Alexander pins Bailey to retain the IMPACT World Title in a grueling contest.

Alexander celebrates with the IMPACT World Title held high as the show goes off the air.

Don’t miss an all-new IMPACT! next Thursday at 8/7c on AXS TV and 8:30pm ET on YouTube for IMPACT Insiders. Due to the length of tonight’s impromptu IMPACT World Title match, Eddie Edwards vs Delirious will now take place next week. Sami Callihan battles Angels of The Design. Plus, Heath and Rhino defend the IMPACT World Tag Team Titles against the Motor City Machine Guns with the Major Players banned from ringside!