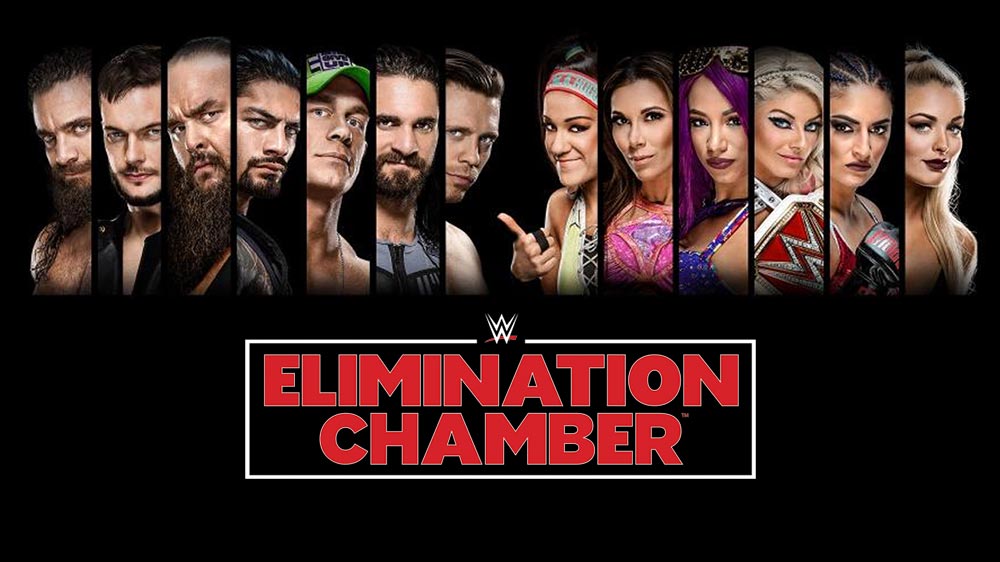 After the match, The Revival was interviewed backstage and they talked trash about Gallows & Anderson before being abruptly cut off as the camera went to the Kickoff desk.

Paige came out with Mandy Rose and Sonya Deville, but stayed on the ramp and went backstage. Mickie James was dressed like Wonder Woman.

Bayley and Sonya Deville started in the ring and everyone else was locked in their pods.

After five minutes, Mandy Rose was let out of her pod and entered the match. The crowd was behind Bayley. Absolution, of course, double teamed Bayley.

Sasha Banks entered the match next and immediately attacked Absolution. Sasha and Bayley worked together. Backstabber and Bank Statement on Mandy Rose by Sasha and Mandy tapped.

Seconds later, Mickie James was in next. After a couple of minutes, Mickie climbed to the top of a pod and jumped down onto Sonya Deville, sort of like a Lou Thesz Press. And Sonya was out…

Bayley then almost immediately hit Mickie James with a Bayley to Belly suplex and eliminated her.

Mickie James was eliminated by Bayley

Alexa was in next, but she tried to close her pod, then tried to climb the chamber to escape from Bayley and Sasha. Bayley and Sasha chased her around, then Sasha finally caught her on top of a pod. Sasha grabbed Bayley’s hand to help her up to the pod, but then kicked her down, turning on her. The crowd chanted “Yes!”

Bayley and Sasha wrestled for a bit until Bayley hit a middle rope Bayley to Belly on Sasha. She went for the pin, but Alexa pulled her off and rolled her up for a quick pinfall.

Bayley was eliminated by Alexa Bliss

Twisted Bliss off the top, but Sasha got her knees up. Later, Alexa went to the top of a pod and nailed Sasha with a Twisted Bliss, but for some reason Sasha immediately grabbed Alexa and locked on the Bank Statement, but Alexa was able to escape. Sasha tried to climb the pod, but Alexa slammed her face into it, then hit Sasha with a DDT as Sasha’s legs hung on the top rope, for the win.

Alexa was interviewed in the ring after the match and was “crying,” then said that this was for every little girl watching at home, and “dare to dream and dream big.” She then immediately stopped crying and was back in heel mode, saying that the truth is that none of you will ever accomplish your dreams. She said that she just proved that there was only one true goddess in WWE.

Endless rest holds by The Bar… Then they said their catch phrase that everyone loves. Another rest hold… Unbearable…

Titus hit the “clash of the Titus” on Sheamus, but Cesaro broke it up. Apollo then hit a dive onto the Bar outside. In the ring, Cesaro hit Apollo with a chop block to the knee, then the Bar hit him with some double team move for the win.

Asuka vs. Nia Jax
If Nia wins, she’ll be added to the Raw Women’s Championship match at WrestleMania

Michael Cole kept calling Nia Jax “the irresistible force.” Nia totally dominated the first few minutes of the match. Asuka tried to fight back with a guillotine hold, but Nia reversed it into a big vertical suplex. Nia went for a middle rope Samoan drop, but Asuka broke free. Asuka suddenly locked on an arm bar, but Nia lifted her up and drove her into the turnbuckle.

Nia shouted that she was going to WrestleMania. She lifted Asuka up for a powerbomb, but Asuka suddenly rolled through and pinned Nia for the win.

After the match, Nia attacked Asuka from behind, then drove her through the barricade on the outside, leaving her laid out.

Renee Young interviewed Alexa Bliss backstage after the match and she said she was happy with what Nia did to Asuka, and at WrestleMania, no one is ready for Alexa.

Matt Hardy’s incredibly horrible cringeworthy theme hit and he came out to a lukewarm reaction. The lights went out and Bray Wyatt appeared in the ring, but Matt Hardy was “missing,” leaving only his coat in the ring. Matt Hardy then started laughing over the PA, then said that he will fade away and classify himself as obsolete, then said he was going to “delete” him. Wyatt looked around the ring for Hardy, but couldn’t find him until Matt suddenly appeared on the apron and attacked Wyatt.

Wyatt controlled most of the match. So long… The crowd started chanting “Rusev Day.” Wyatt went for Sister Abigail, but Matt escaped and hit the Twist of Fate for the win. Alright.

Kurt Angle, Stephanie McMahon and Triple H entered the ring and stood in front of a red table. Triple H hyped up Rousey and talked about her accomplishments and the crowd started to chant “What.” Seems like this might not go well…

Rousey’s “Bad Reputation” theme hit and she came out to a pretty good reaction, surprisingly. Ronda got on the mic and seemed humble, saying she was speechless. The crowd started chanting “Ronda Rousey,” so that’s good.

Ronda asked Kurt if he wanted to say something. Kurt said that Triple H and Stephanie were geniuses. They wanted to bring Ronda here so they could manipulate her because of what she did to them years ago at WrestleMania. Kurt said that Triple H told him, “three years in the making and we own the bitch.” Triple H interrupted him and said that Kurt wasn’t feeling well, because he had the flu and was hospitalized earlier.

Kurt then said, “One last thing, Stephanie. Didn’t you tell me that Ronda was a has-been and that even you could take her?” Triple H grabbed Kurt and walked him down the ramp.

Ronda got in Stephanie’s face, but Triple H returned and broke it up, but Ronda got in his face. Triple H helped Stephanie out of the ring, then quickly walked back to Ronda and got in her face, but she picked him up and threw him through the table! Stephanie got back in the ring and slapped Ronda in the face and screamed, “Who do you think you are?” Rousey stared at her, but Stephanie quickly rolled out of the ring.

Ronda picked up the contract, signed it, and threw it down on Triple H. That was done really well.

Men’s Elimination Chamber Match
For a Universal Championship Match at WrestleMania
Braun Strowman vs. Elias vs. Finn Bálor vs. John Cena vs. Roman Reigns vs. Seth Rollins vs. The Miz

Elias started off in the ring and got ready to sing a song. He made fun of Las Vegas, then started to sing, but the crowd booed him, so he got angry and said “How about I don’t sing and go sit in my pod?” The crowd chanted “Yes.” Elias said that he just hit the right pitch, so he’s going to keep going.

Braun Strowman’s theme interrupted him. John Cena was next, then Roman Reigns, then Miz, then Seth Rollins and finally Finn Balor.

Seth Rollins, Finn Balor and The Miz started the match in the ring. After five minutes of nothing really happening, John Cena entered the match. Roman Reigns entered after another five minutes. Miz hit everyone with the Yes kicks until Reigns nailed him with a clothesline.

Braun Strowman finally entered and took out everyone. The crowd was not into this match. Very weird and slow pace. Cena and Rollins tried to double team Strowman and hit him with a suplex, but he reversed it and suplexed them both. The Miz ran away from Strowman and climbed up on a pod, but Strowman quickly chased him up, then tossed him off the pod onto everyone else in the ring. Running powerslam on The Miz and he’s out.

The Miz was eliminated by Braun Strowman

AA by Cena on Reigns. Superkick by Rollins on Balor. Everyone was laid out in the ring and Elias finally entered the match and tried to pin everyone, but they all kicked out. Elias got some offense on a few people until Strowman returned to the match and hit him with a Running Powerslam to knock him out.

Elias was eliminated by Braun Strowman

Cena dived onto Strowman off the top, but Strowman caught him and hit him with a Running Powerslam.

Balor hit a coup de grace onto Strowman, but Strowman kicked out. Balor then hit the coup de grace on Roman Reigns, but Braun Strowman returned and picked him and nailed him with a running powerslam.

Braun Strowman, Roman Reigns and Seth Rollins remained. Reigns and Rollins fist bumped then double teamed Strowman. Rollins suddenly turned on Reigns though. He went for the curb stomp, but missed, but he then hit a buckle bomb onto Reigns, but Reigns got up and hit a Superman punch. Later, Rollins hit a frog splash onto Strowman off the top of a pod. Rollins went for a curb stomp (which they kept calling “the stomp”) but Strowman got up and hit another running powerslam.

Roman Reigns vs. Brock Lesnar at WrestleMania for the Universal Championship, as expected. Reigns celebrated and looked at the WrestleMania sign until Braun Strowman suddenly got up and hit him with a running powerslam, then another. He then threw Reigns through one of the pods and raised his arms in the ring before walking down the ramp. Reigns lay in the pod as the show went off the air.