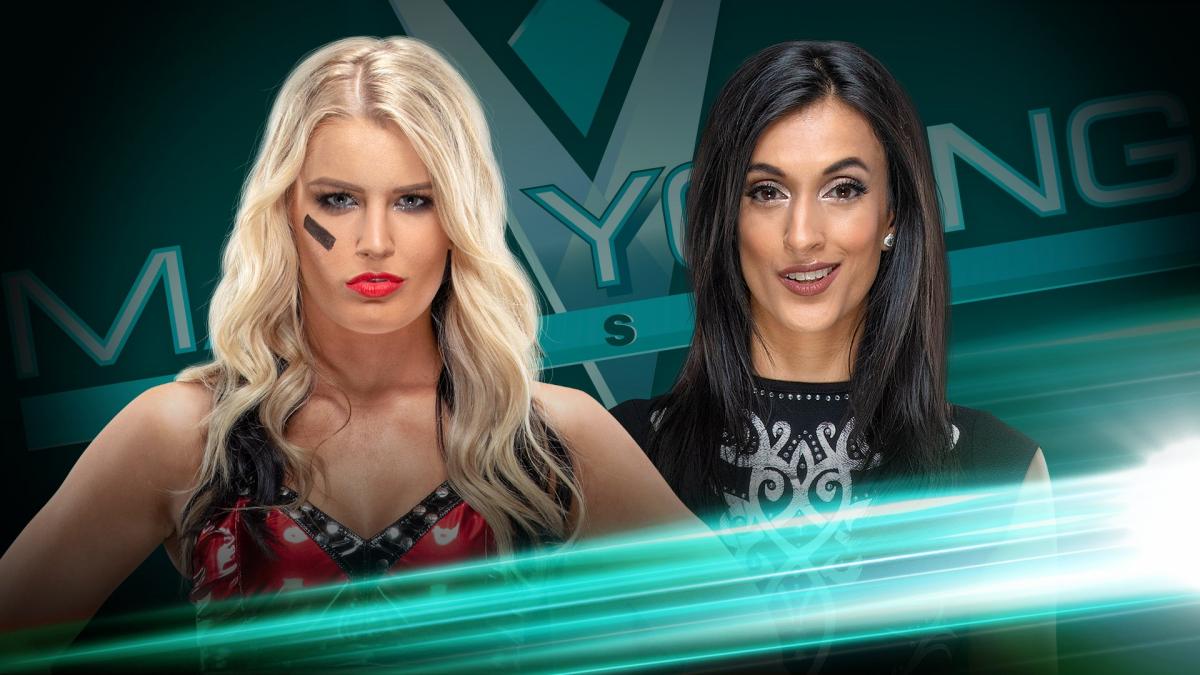 Kaitlyn defeated Kavita Devi in a first round match

As a lot of you reading this probably remember, I used to review NXT. The very first match on the very first show I reviewed was Kaitlyn vs. Maxine, which was such a terrible three minutes that it won the Wrestling Observer Worst Worked Match of the Year Award. Kaitlyn did improve quite a bit over the years and is a former Divas Champion and the winner of NXT season three. Ironically, she never had a match at WrestleMania — while Kavita Devi has been in developmental for under a year and was in the Women’s Battle Royal this year.

This match was mostly fine. It was a little rough in the middle, but they held things together and Kaitlyn won with a spear after a cannonball in the corner. Kaitlyn seemed ready to cry when her hand was raised.

Kaitlyn will next go one-on one with the winner of Mia Yim vs. Allysin Kay, which is our main event this week.

Toni Storm defeated Jinny in a first round match

Jinny is a fashionista, but she at least wants to use the MYC to catapult her career from modeling to WWE. If this were 1995, she would be wrestling to become a bigger star in modeling. Storm competed last year and made it to the semifinals before losing to Kairi Sane.

Tyler Breeze was shown at ringside watching on for this one. Makes sense since he’s a model and Jinny’s a model. The Iiconics were also shown watching.

Jinny tapped out to an armbar, but apparently it didn’t count. Storm nearly booted Jinny’s head off her neck, but Jinny gave Storm an STO into the middle turnbuckle. Jinny used an armbar and a crossface, which was unique. Jinny gave Storm an arm drag near the corner. Not sure if Storm was supposed to hit the turnbuckles, but she didn’t and bumped on the mat.

Jinny used a rolling surfboard but eventually had to let go. Jinny ran face-first into Storm’s foot, which began Storm’s comeback. She hit a snap German suplex, a running hip attack, and the Storm Zero Tiger Driver for the pin!

Storm will face the winner of Rachel Evers vs. Hiroyo Matsumoto.

Xia Li defeated Karen Q in a first round match

Li is the first Chinese female signed to WWE and was in last year’s Mae Young Classic, where she lost to Mercedes Martinez in her first-ever match. Q is a former gymnast, who has a master’s degree in nursing and has wrestled in ROH and SHIMMER.

Johnny Gargano and Candice LeRae were ringside for this one.

The match started with a show of respect and a martial arts demonstration. Q got the worst of it — so she slapped Li, much to the chagrin of the fans. Q periodically did a mocking bow towards Li during the match. Li made her comeback with a series of kicks to the thigh. Q ducked a high kick, but Li came up with the other foot to knock Q out.

The finish saw Q miss a frog splash and get pinned after a twisting ax kick. Li moves onto the Sweet 16 to face Deonna Purrazzo.

Mia Yim defeated Allysin Kay in a first round match

If the rumors are true, congratulations to Mia Yim on being signed to WWE. Both Kay and Yim are former Impact Knockouts Champions, and Kay beat Yim for the title when they were known as Sienna (Kay) and Jade (Yim). They also have wrestled each other all over the world, including a match where Yim broke Kay’s nose.

Sonya Deville and Shelton Benjamin were at ringside for this one.

Yim got the better of the early exchanges, including her running down the apron and kicking Kay squarely in the chest. Back in the ring, Kay laid Yim out with a Pounce that sent her halfway across the ring and out of it. Yim rebounded from that and hit a suicide dive. However, her advantage ended there as she backed Kay to the post and went for a chop, but Kay ducked and Yim chopped the ring post! That echoed across Full Sail.

An exchange of submission holds led to Yim blocking a high kick and the two enemies going forehead-to-forehead before resuming their battle. Kay backdropped out of a package piledriver attempt, but she got caught with a Code Red for a near fall. Yim went to the middle rope, and after a brief scuffle, hit Sole Food (Gail Kim’s Eat Defeat) for the win.

Probably the best match of the first round so far. Yim now faces Kaitlyn in the next round.