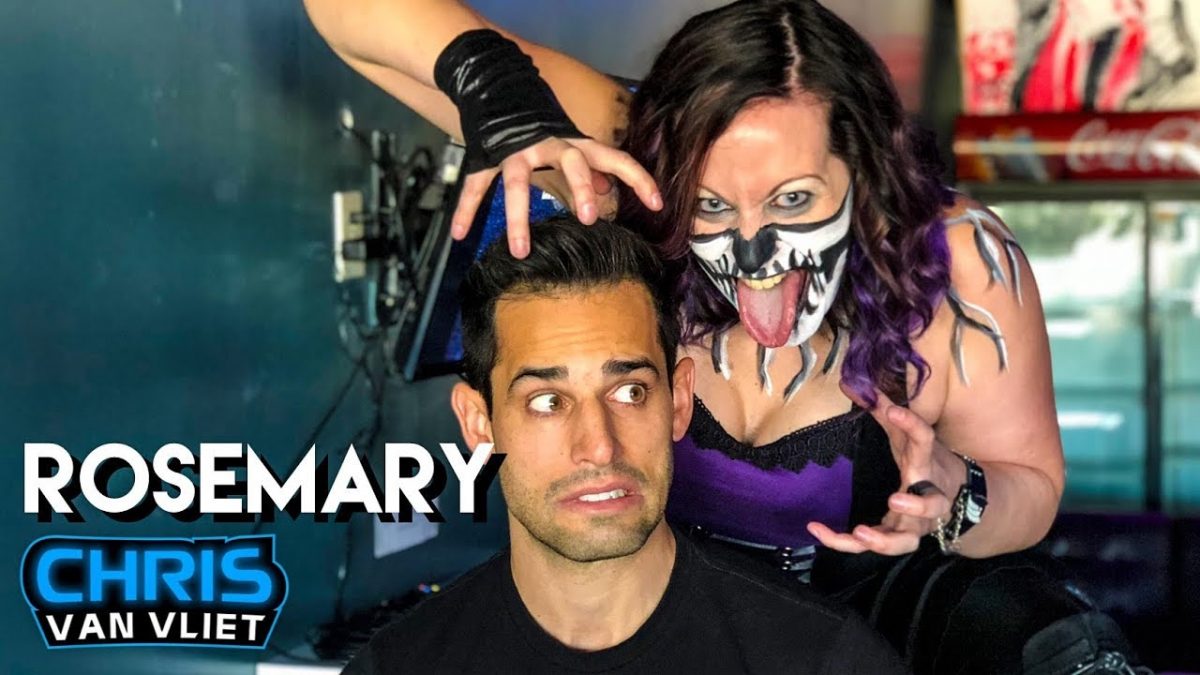 Rosemary was interviewed by Chris Van Vliet at a meet and greet put on by That Wrestling Club in Winter Park, FL.

She talked about her thoughts on Ronda Rousey, how the TNA Knockouts started the women’s revolution, the WWE Evolution Pay Per View, what scares her, why she hates Halloween and much more.

Her thoughts on WWE Evolution:
“It’s absolutely wonderful to see more and more opportunities that these female warriors acquire. It’s growth. There’s nothing more natural than evolution and we are of course an advocate of nature. It’s wonderful to see these opportunities in every step towards another one and another one and another one. It doesn’t matter what companies or what divides or who works where, it is all empowering these female warriors.”

On Ronda Rousey:
“She’s doing well thus far but could that be because she introduced an element of the unknown? Won’t it be interesting when the other girls start learning her tactics, learning her ways, learning her weaknesses. A true warrior studies their opponent and it’s only a matter of time before someone find that kink in her armor.”

On Impact Wrestling starting the women’s revolution:
“There have been female warriors for countless years, we just have not had the spotlight that we are receiving now. So the opportunity is there and they are taking it and running with it and showing that they always did deserve it all along. This is one of the reason we wanted to take our special brand of particular violence and chaos to Impact because we knew that there was history there. We knew that there were certain people that had come before such as Daffney and Roxxi Laveaux that had a certain brand of dark violence and we knew that ours would fit there as well.”

Why she doesn’t like Halloween:
“Oh it’s quite something different in the Shadow Realm, we assure you. There’s far too much candy and sugar and falsities and quite frankly lies here in the mortal realm. You’ve lost your way. It used to be about spirits and demons and our world and now it’s about sugar and pumpkin flavored energy potions.”

They talked about their recent WWE tryout, the feedback they received from the trainers at the Performance Center, how they got into the industry, why they use the 3D as their finisher and much more.

On their WWE tryout in June 2018:
Terrence: It went phenomenal. I think it went great. We got a lot of feedback from all the trainers, and yeah, it went great. The feedback was they think we’ll do very well in a future position. They would just like us to have a fanbase first. So they’re suggesting maybe starting out with Japan, the UK, stuff like that before we start out in NXT.

Terrell: We got a lot of advice from Scotty 2 Hotty as far promos, Mark Henry as far as character, how to feed off each other. Mark Henry, Scotty 2 Hotty, Matt Bloom, the head trainer over at NXT, so many guys gave us advice.

When they think they’ll be in WWE:
Terrell: Only time will tell, right now we’re focused on conquering every promotion we step in. Our main goal, though, is going overseas to Japan, to Europe… we want to touch base pretty much all over the world first, conquer that. That’s kind of what Bubba and D-Von advised us to do, because that’s what they did. We kind of want to earn our stripes first before we fully get our foot into NXT.

On using the 3D as their finisher:
Terrell: At first we didn’t want to do the 3D because we didn’t want to copy everything, but then Bubba pulled us aside and said why not use the most devastating finish for tag team wrestling of all-time? He said what other tag team finish utilizes both people like that? So I agreed, then we talked about it and we tried to come up with some weird finish where it was like a double Alabama Slam. It just didn’t really work. So we tried the 3D; we did our first 3D in Tampa for our first show, and we got a big pop. We were like — alright, we’re going with the 3D.

On doing the What’s Up:
Terrence: Our dad wanted us to do the What’s Up, but we felt like that was completely ripping him off. But when we do that, everybody pops. Who doesn’t pop when you put your head in somebody’s crotch? I mean, we get a pop every time with that! We’re trying to maybe just do the 3D for now and come up with some more stuff on our own.

What it was like growing up in the wrestling industry?
Terrence: We grew up in during the greatest era of wrestling: the Attitude Era. So how can you not fall in love with it? We weren’t just watching it on TV. We were there for all the shows. Madison Square Garden, The Godfather, Chris Benoit, all the greats. I was actually there when our dad powerbombed Mae Young through the table. That was like the sickest moment. So those experiences we had — we fell in love with it.