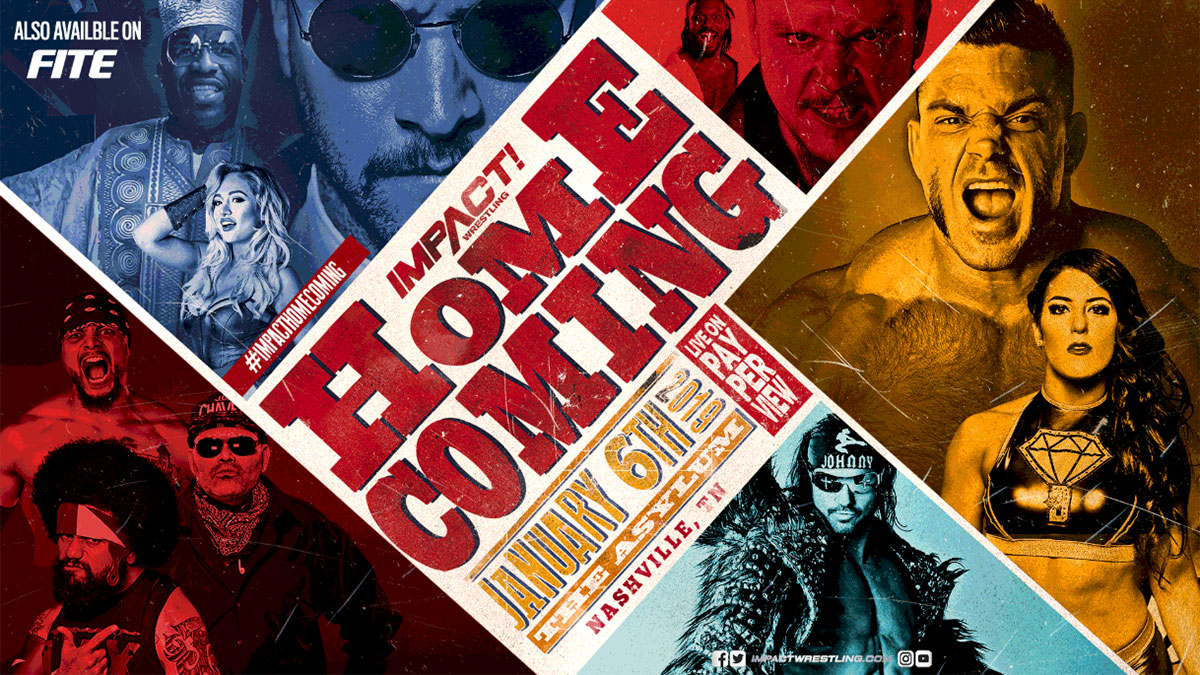 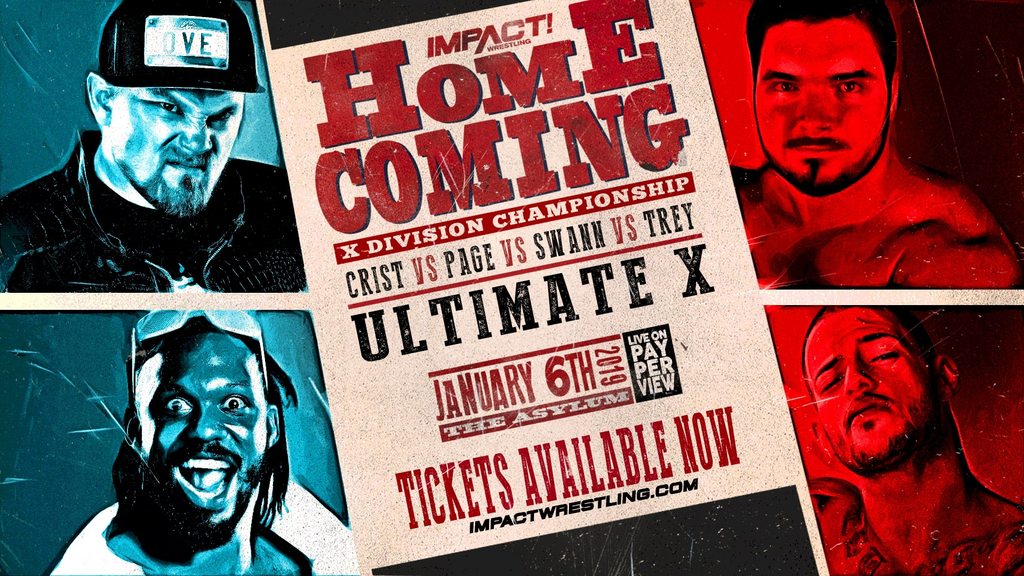 The first person to pull down the X-Division championship from high atop the ring will be crowned the new X-Division champion! Page throws Trey off the top rope into Crist and Swann on the floor. Crist hits a double cutter on Swann and Trey. Page climbs the cables but instead of going for the belt, he drops an elbow on Crist. Trey is next to climb across the cables but Page pulls him down into a backbreaker! Crist flies over the top rope and hits Trey with a DDT on the floor. Swann launches himself over the top, crashing into everyone on the outside! Trey climbs a truss and connects with a Moonsault to the floor! Crist hits Swann with a Tombstone Piledriver on the steel ramp. Crist is hanging from the cables when Page spears him to the mat! Swann and Trey race for the title but Swann gets there first! Rich Swann is the new X-Division Champion! 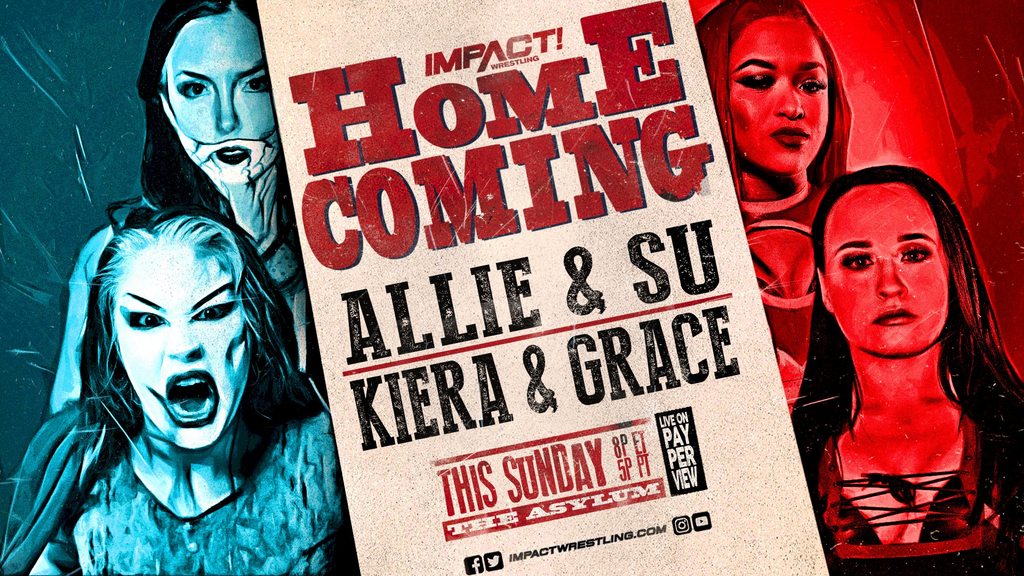 Allie and Su wear down Kiera on their side of the ring, preventing her from tagging in Grace. Grace attempts to get involved but the referee stops her, allowing an illegal two-on-one assault from Allie and Su. Su hits Kiera with a big neckbreaker out of the corner. Kiera turns the tide and gets the hot tag to Grace! Kiera hits Allie with a suicide dive to the outside. Su wants to fly next but Grace cuts her off. Grace picks up Su and Kiera jumps off the apron, slamming Su on the floor! Grace uses her power to slam both Su and Allie with incredible force. Kiera attempts a pin on Allie but she kicks out at two. Su spits red mist in the face of Grace! Su then gives the bloody glove to Allie and she locks in the Mandible Claw on Kiera for the win. 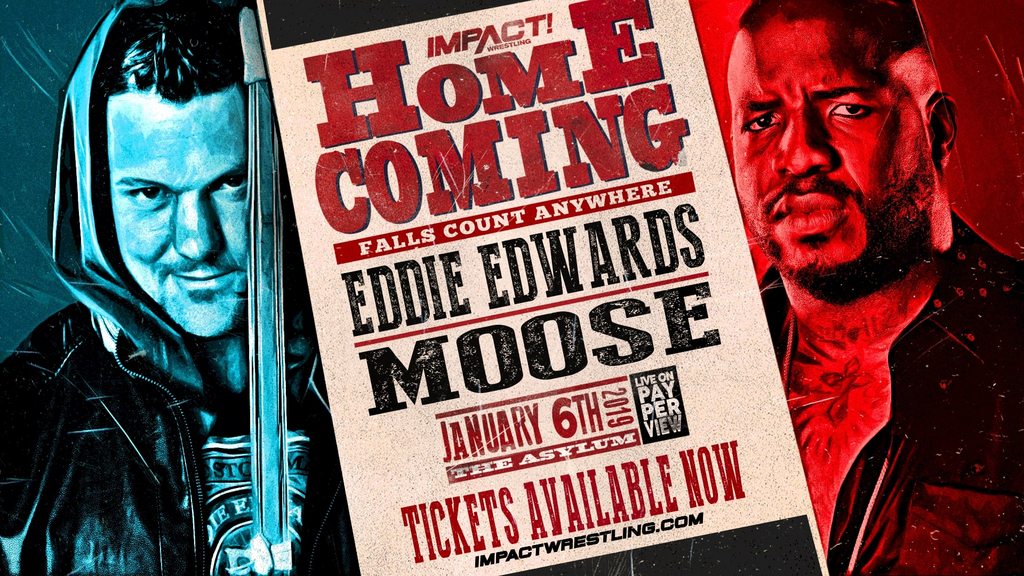 Eddie attacks Moose from behind during his entrance to jump-start the match! Moose hits a sick powerbomb on the edge of the ring apron. Eddie flies through the ropes, connecting with a big suicide dive. The brawl spills out into the crowd. Eddie hits a slingshot crossbody off the balcony! Moose is perched on the top rope as Eddie hurls a steel chair at him. Eddie connects with a Superplex off the top rope into a pile of steel chairs! Moose charges at Eddie but Eddie sends him over the top rope and through a steel guardrail on the floor! Alisha Edwards comes out, pries a kendo stick out of Eddie’s hands and cracks Moose over the head with it! Eddie hits his signature DDT to score the victory. 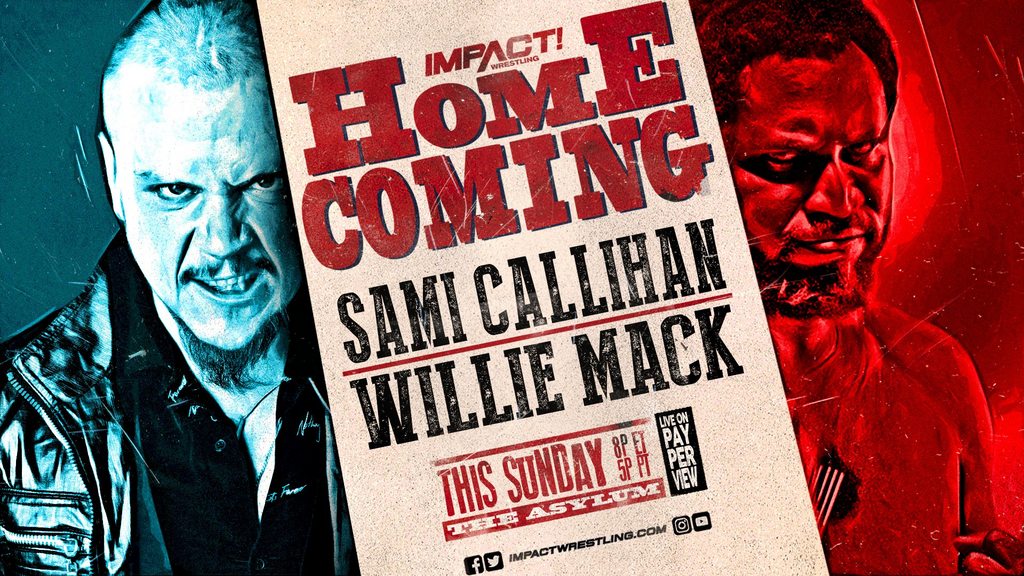 Mack hits a flip-dive over the top rope into Callihan and Crist on the floor. Crist distracts Mack on the floor, allowing Callihan to gain the advantage. Mack hits a Samoan Drop, followed by a standing Moonsault for a near fall! Mack connects with a Sky High sit-down powerbomb but Callihan kicks out. Callihan hits a powerbomb of his own, followed by a knee to the jaw. Crist grabs Mack’s leg, allowing Callihan to connect with a Death Valley Driver off the top. Callihan goes for the pin but Mack kicks out at one! Callihan is finally able to score the victory with a devastating Piledriver. 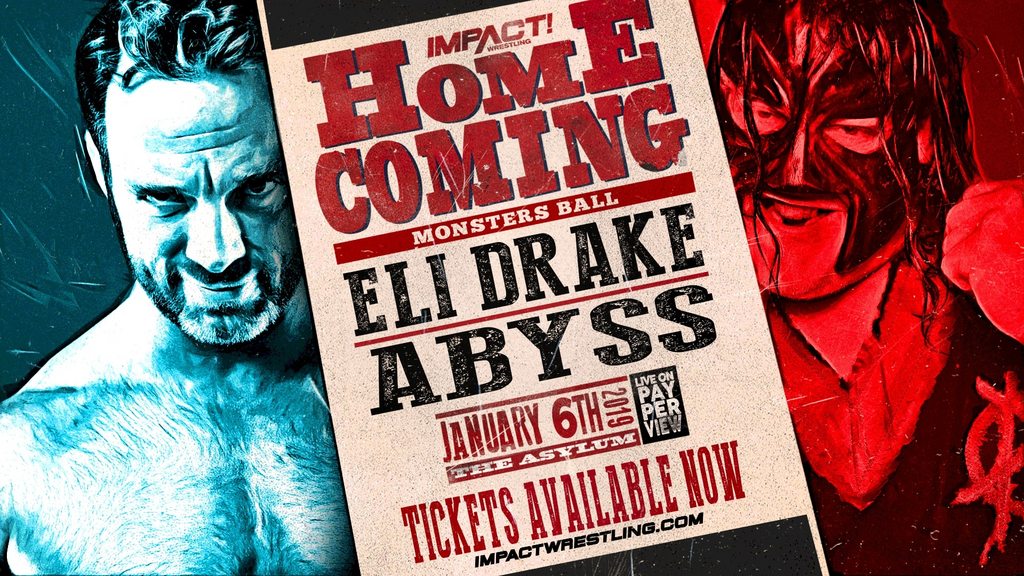 Monster’s Ball means there are no disqualifications, no count-outs and anything goes! Drake attacks Abyss from behind to gain control in the early going. Abyss grabs a staple gun and staples the chest of Drake! Abyss flips Drake over the top rope, sending him crashing through a table on the floor! Thumbtacks are brought into the match by Abyss. Drake grabs a handful and throws them at Abyss but he ducks, causing Drake to hit the referee! Abyss hits the Black Hole Slam but the referee is blinded. Abyss retrieves his signature weapon, Janice from underneath the ring. Abyss swings but Drake cuts him off with a chair. Drake attempts to use Janice but Abyss chokeslams Drake into the thumbtacks! Abyss goes for the pin but somehow, Drake kicks out at two! Drake assaults Abyss with a steel chair, then breaks a paddle over his head to win the match. 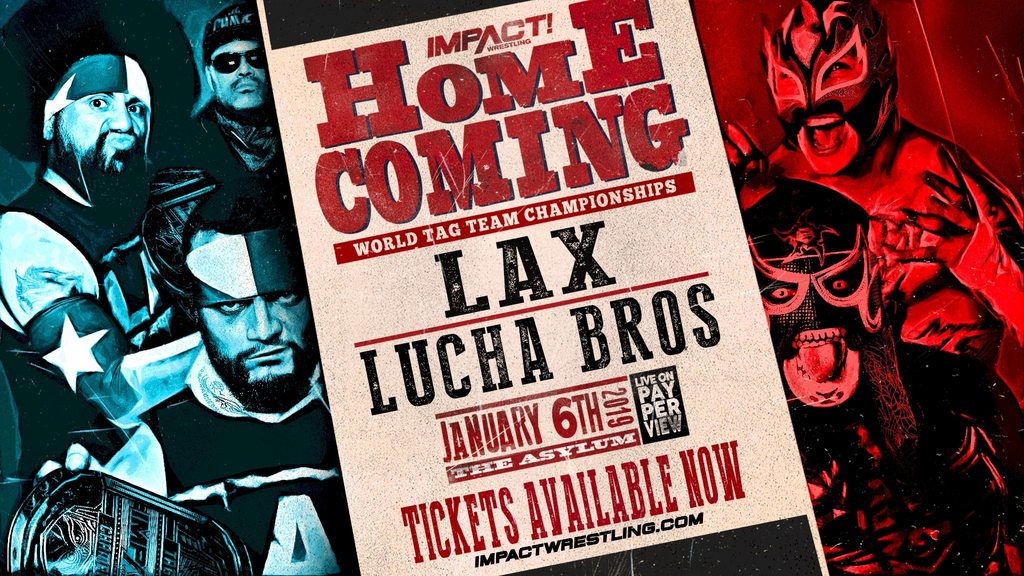 The Lucha Bros are on fire in the early going as they almost put LAX away in the opening minutes! Ortiz hits a flip dive through the ropes, taking out Fenix on the floor. Santana is next to fly with a springboard Moonsault to Pentagon. The Lucha Bros continue to fly as Pentagon launches Fenix into LAX on the floor. Pentagon hits Ortiz with a Codebreaker, followed by a double foot stomp from Fenix for a near fall. There’s a crazy flurry of action that ends with a sick Destroyer from Pentagon! The Lucha Bros hit the spike into the Fear Factor Piledriver for a very close near fall! Santana and Ortiz connect with the Street Sweeper on Pentagon but Fenix flies into the ring to break the pin attempt! LAX hit an insane flurry of action on Fenix to put him away and retain the Tag Team Championships.

After the match, Konnan comes to the ring and admits that he was wrong. LAX and the Lucha Bros! were able to compete without ruining their relationship. Konnan congratulates both teams on an amazing performance in the birthplace of IMPACT Wrestling. 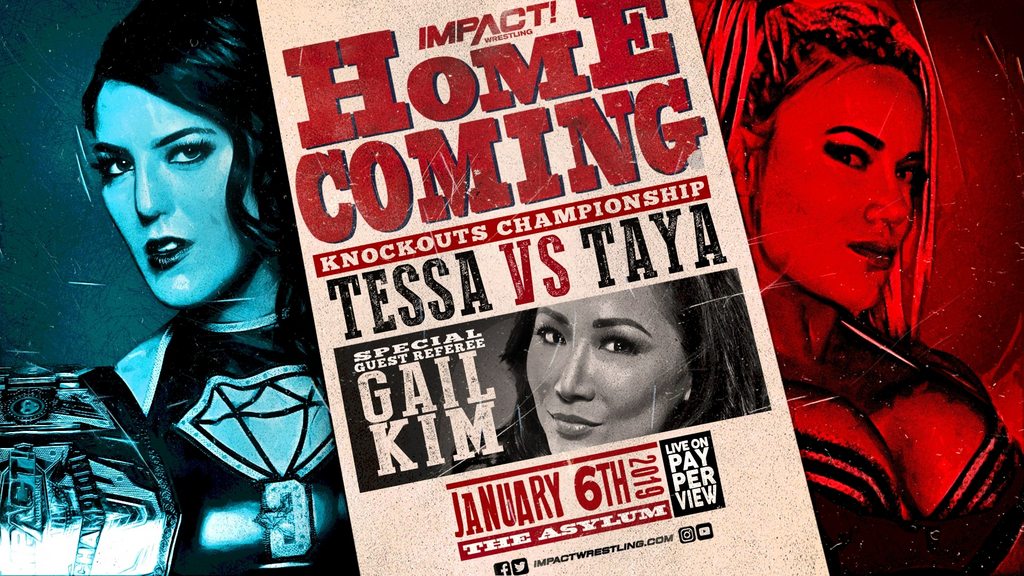 Tessa wears down Taya in the early going. Taya hits a German suplex to turn things around. Taya connects with double running knees in the corner for a two count. Tessa attempts the Buzzsaw DDT but Taya counters into a Northern Lights suplex! Taya misses a Moonsault, allowing Tessa to connect with the Spear for a near fall! Tessa inadvertently hits Gail Kim, knocking her down to the mat. Tessa hits Taya with the Buzzsaw DDT but Gail is unable to make the count! Tessa grabs the title and Gail attempts to pry it out of her hands. Tessa lets go, causing Gail to hit Taya with the title! Tessa goes for the pin but Taya kicks out again! Tessa attempts to hit Gail but she turns it around and connects with Eat Defeat! Taya follows up with the Road to Valhalla to score the pin and the Knockouts Championship! 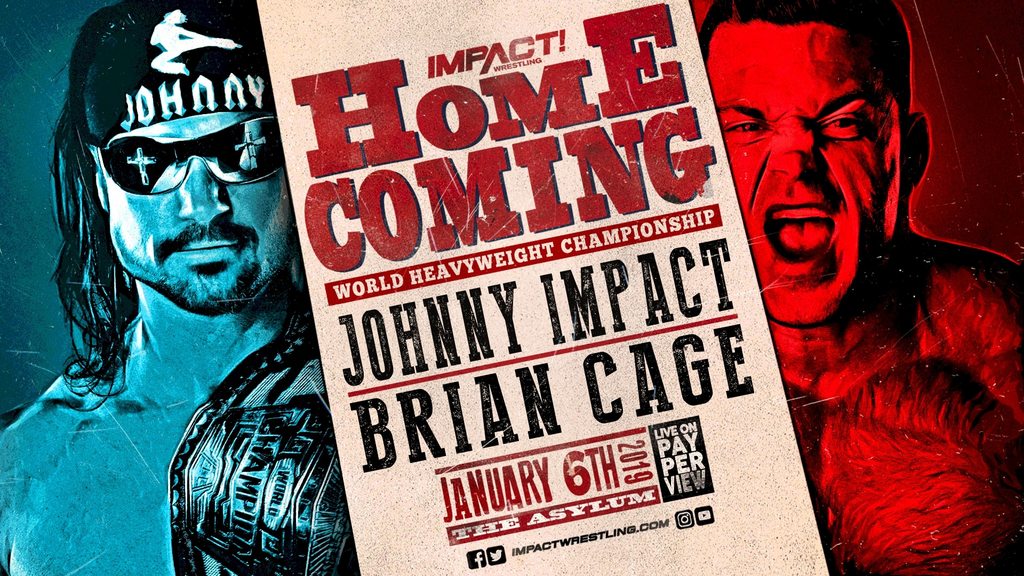 Impact attempts a slingshot into the ring but Cage catches him and hits a Northern Lights suplex. Cage hits an Electric Chair face-plant for a two count. Impact connects with a tornado DDT, sending Cage to the outside. Impact follows up with a flying knee from the top rope to the floor! Both men exchange running strikes. Cage gets the better of it with a German suplex that sends Impact flying across the ring! Impact hits back-to-back swinging neckbreakers, followed by a big kick for a two count. Impact attempts a Razor’s Edge but Cage fights it off. Instead, Impact connects with a sliding German suplex through the ropes. Cage hits the F5 for a near fall! Impact counters Weapon X into a rollup but Cage kicks out! Cage connects with a huge discus clothesline but Impact still gets his shoulder up before the three count. Impact hits Starship Pain for a very close near fall! Impact connects with a Spanish Fly off the top rope but this time, Cage kicks out before the one count! Cage fights back with a series of powerbombs. Cage hits Weapon X but Impact breaks the pin by getting his foot on the bottom rope. Impact’s buddies from Survivor cause a commotion around ringside, distracting Cage and the referee! Impact launches himself off the top and pins Cage to retain the World Championship!

After the match, new Knockouts Champion Taya Valkyrie comes out to celebrate with her husband. Then, Killer Kross attacks Impact from behind! Taya fights back but Kross hits her with a powerbomb off the stage!

IMPACT Wrestling debuts on its new home of Pursuit Channel, this Friday at 10 p.m. ET. If you can’t watch on Pursuit, IMPACT Wrestling will be simulcast in the US on our Twitch Channel each and every week.