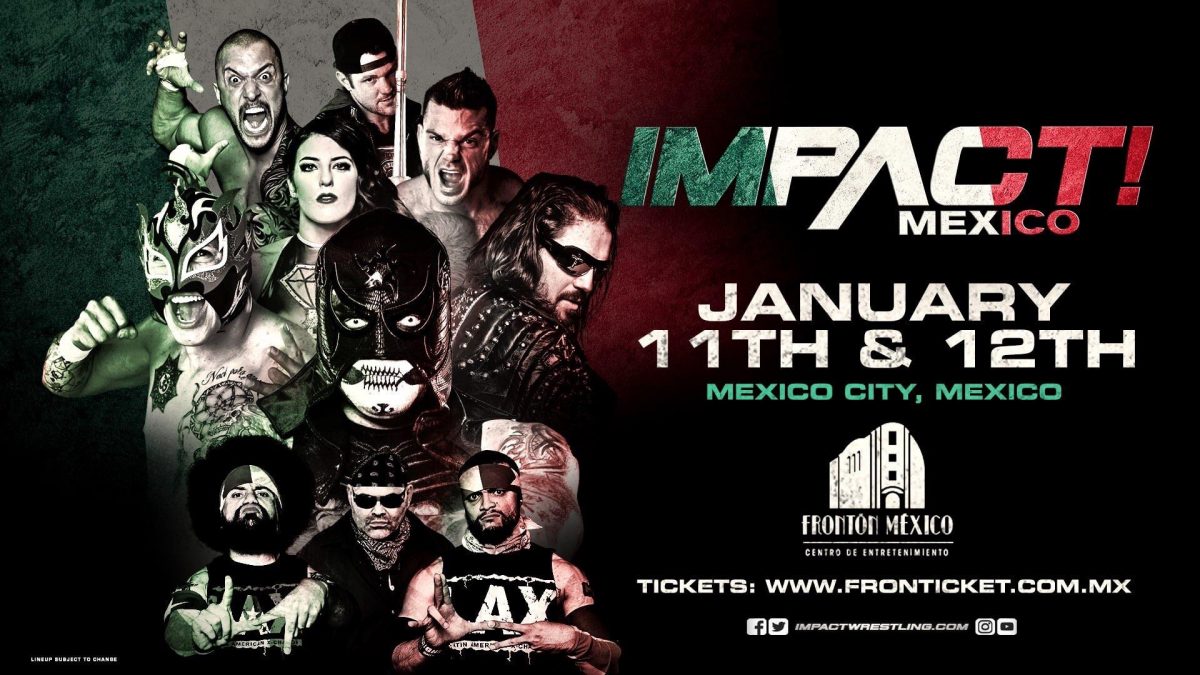 Results via f4wonline.com and Antonio Garza

Impact World Championship: Johnny Impact (c) vs. Killer Kross ended in a no contest – Johnny’s title was on the line. Brian Cage interrupted the match and got involved, taking both Johnny and Kross out when Kross had a sleeper on Johnny. Afterwards, Moose got involved and they all started brawling, with Cage and Johnny teaming up to clear the ring. Cage and Johnny faced off at the end. The crowd was energetic, mostly behind Johnny, but there were a few Killer Kross fans. Moose was wearing beautiful sparkling shoes.

The Rascalz (Dezmond Xavier & Zachary Wentz) defeated The Desi Hit Squad – Before the match, Gama Singh got heat from the crowd by claiming he had pinned El Santo, Mil Mascaras, Blue Demon, and other names like that. Wentz pinned Raj after hitting the Hot Fire Flame. The crowd liked this match.

Knockouts Champion Taya Valkyrie defeated Keyra in a non-title match – Valkyrie won via STF submission. She then cut a promo bringing up that Tessa Blanchard has been suspended and that she will be a fighting champion. The crowd was behind Valkyrie all match.

Trey Miguel defeated Ethan Page – Trey won with a Cross Rhodes-like move after selling most of the match. The audience was mostly dead for this — you could tell they didn’t recognize either man.

Pentagon Jr, Fenix & Tauro defeated LAX & Daga – Easily the match of the night, in both in-ring action and crowd reactions. The Lucha Bros were incredibly over, and Pentagon pinned Ortiz after a spike Fear Factor. Daga and Taurus had a great showing. After the match, Pentagon challenged LAX for another shot at the Tag Team titles for “next week.” LAX accepted.

Kiera Hogan & Jordynne Grace defeated Su Yung & Allie – Most of the match saw Grace play the babyface in peril. Allie was dragging herself for a tag to Yung, but the lights went out, and once they came back, Rosemary had taken Yung’s place at the corner. Allie, surprised, was pinned by Kiera Hogan, who took advantage of the distraction.

Rich Swann & Willie Mack defeated oVe – Mack was the most over of the four. Swann pinned Dave Crist after a 450.

Moose & Killer Kross defeated Johnny Impact & Brian Cage – Moose speared Johnny and pinned him after Cage and Johnny had some miscommunication and got distracted arguing with each other.

In-Ring: Sami Callihan, Rich Swann – Sami Callihan came out for a promo on Swann. Callihan claimed that Swann had rejected his invitation to join oVe. Swann came down, and they got in a fight that ended with Callihan piledriving Swann on the ramp and then tossing him off the ramp into a table.

X-Division Champion Rich Swann defeated El Hijo del Vikingo in a non-title match – This was a great, must-see match and a great showing for Hijo del Vikingo, who got a big reaction from the crowd. Swann pinned Vikingo after a 450 Splash. After the match, oVe came out to confront Swann. Sami Callihan talked about the history between he and Swann, saying that he was always there for him, more than his family, and so Swann owed everything he had achieved to him. Callihan offered Swann to join oVe, but he rejected the invitation.

Kiera Hogan defeated “Dark” Allie – There was no clear interference from either Grace or Yung, but the finish saw Grace take out Yung, distracting Allie who left her guard down for Hogan to roll her up for the win.

Trey Miguel defeated Rohit Raju – This was an action packed match that got a good amount of time. Miguel got a better reception from the fans and won with a top rope meterora.

Knockouts Championship Street Fight: Taya Valkyrie (c) defeated Tessa Blanchard to retain – These two women went out there looking to give it their all. The spots in the match were not particularly violent in nature, but looked brutal live. There was a big board in the ring that they were not able to break even after a second spear against it. The finish saw Valkyrie hit a double foot stomp from the top rope onto Blanchard, who laid on a table. The crowd reacted well to the weapon spots and were behind the champ.

Impact World Championship Four-Way: Johnny Impact (c) defeated Moose, Killer Kross, and Brian Cage to retain – This was another great must-see match with four big dudes going all out. The fnish saw Impact hit Starship Pain on Moose while Cage hit the Drill Claw on Kross, but Impact covered Moose a second earlier so he won the match. Cage and Impact faced off afterward.

Psycho Clown defeated Fallah Bahh – Like on Friday, the reaction to Psycho Clown wasn’t favorable. He won with La Magistral.

Sami Callihan defeated Puma King – King had a great reaction from the fans, while Callihan was a heat machine. Callihan pinned Puma King after a piledriver in a great match with a lot of time.

Eli Drake and Eddie Edwards defeated The Rascalz – The finish saw Drake hit the Gravy Train on Xavier after hitting him with Edwards’ kendo stick behind the referee’s back. After the match, Edwards complained to Drake about using the stick to win. Edwards brought out the stick to begin with, so I’m guessing he was just jealous someone else used it.

Impact Tag Team Championship: Lucha Bros (Pentagon and Fenix) defeated LAX (c) to become the new champions – The Lucha Bros got a big match entrance with Chinese dragon dancers. This was about as good as the Homecoming match, if not slightly better. The crowd was hot for the Lucha Bros, and when some fans started an ‘Impact Wrestling’ chant, the Cero Miedo chant would overtake it. The finish saw Pentagon pin Santana with the spike Fear Factor, while Fenix hit a Tope con Giro on Ortiz on the outside. After the match, all four men embraced. The show ended with all the babyfaces coming out to celebrate with the Lucha Brothers. They got an ‘Impact Wrestling’ chant going, and stayed for a while taking pictures with the fans and high-fiving all around.

Xplosion: Fallah Bahh defeated Raj Singh – Bahh was really over with the crowd and pinned Raj after a Banzai Drop.