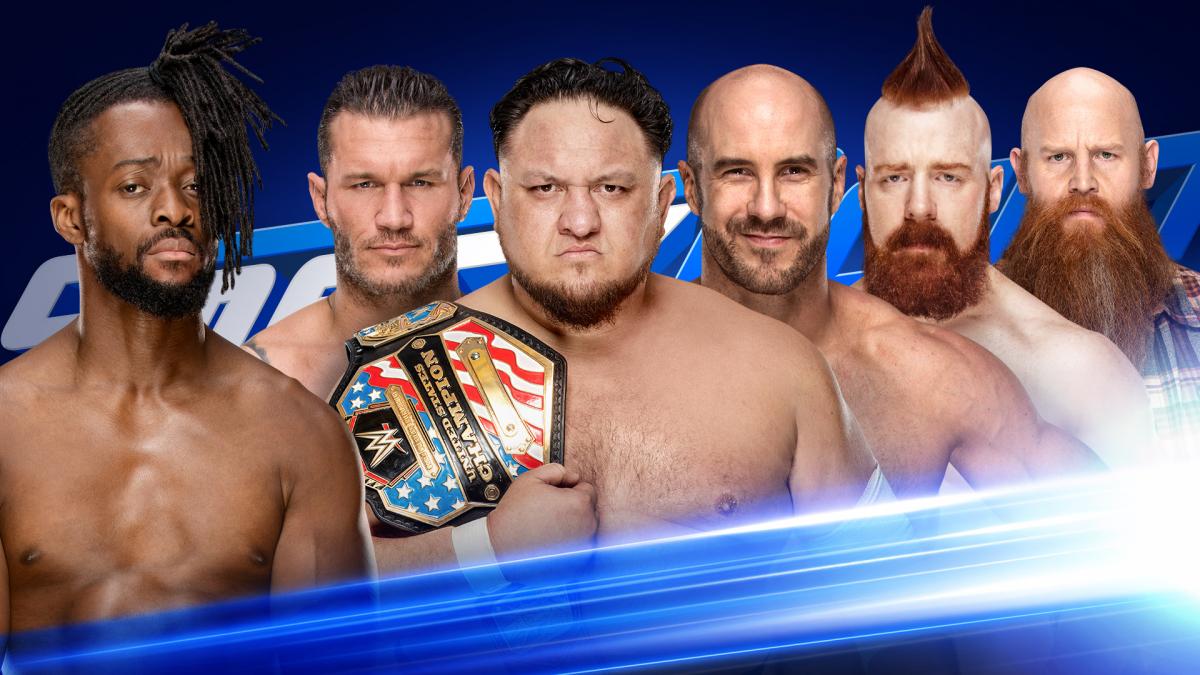 The Miz said that for over 10 years, he was focused on one road and that is the road to WrestleMania. But at what cost? Because he has taken advantages, shortcuts to get there. Aside from his wife and daughter, he has sacrificed every relationship in this business and that’s what this means to him. And that’s what his friendship meant with Shane to him. He says that it was all to prove to one person, his dad. When his dad stood in the ring, it was the first time he heard his dad say he loved him and was proud of him. And Shane made that happen for him. And Shane told him that one of his dreams was being a tag team champion and Miz helped make that happen.

Miz says that people warned him about Shane but he didn’t believe them. But he was wrong and at Fastlane, Shane attacked him in front of his 68 year old father. Miz asks what kind of person would do that? And after that, Shane put his hands on his father. And it is something that will stay with him for the rest of his life. The Miz calls Shane disgusting and says he is rotten to the core just like his father. Miz says he wasn’t born best in the world, he’s a McMahon, he was born the worst. Miz says they may own the company but they don’t own him. And they don’t own Kofi.

Mis states he was born in Cleveland, destined to flip burgers, not rich. People said he was average. But he went on and proved everyone wrong and he did it and became a champion. And he did all of that on his own. Miz says that you can never deny his work ethic and he believed hard work beats talent when talent doesn’t work hard enough. He is a proven success story and that’s something to be proud of. Miz says that Shane deserves the one thing he earned all by himself. An ass whooping from him at WrestleMania. He drops the microphone and leaves the ring.

Bayley & Sasha Banks vs. The IIconics

This was a non-title match. The challengers get on the microphone and talk about how the champions are finally on Smackdown Live. But how they look strange, small and strange inside their ring. As if their parents bought their way into an ivy league school they couldn’t get into. Royce even says they went back to NXT to make themselves feel important and they get pushed away on Raw. And how they have no choice but to face the best women’s tag team.

Lacey Evans’ music hits. She walks down the ramp. With Bayley distracted, Billie Kay attacks Bayley from behind and Peyton Royce is tagged in. They double team Bayley. Royce goes for the cover but Billie Kay kicks out.

Back from commercial, Royce tags Kay into the match. Both Bayley and Billie Kay run into each other in the ring and both fall. Bayley tags Sasha Banks in and Peyton Royce is tagged in. Sasha with a kick to Royce. Banks gets on the second rope and jumps onto Royce. She goes for the cover but Kay breaks it up. Royce rolls Sasha up and goes for the cover but Sasha kicks out. A kick to the face by Sasha. Kay grabs Sasha and trips her. Bayley runs to Billie Kay but Kay hits her. Royce rolls Sasha Banks and Billie Kay grabs Royce’s arm for advantage and they get the 3 count.

Backstage, Rey Mysterio says he has exciting plans for WrestleMania. He calls in his son Dominic in. Rey says that after pinning Samoa Joe, he will be facing Joe for the United States championship at WrestleMania. Dominic is asked about what he thinks. Dominic says Joe is just a bully and at WrestleMania, he will see his dad do what he does best and that’s taking out bullies and brining in another WWE title.

Kevin welcomes everyone to the new and improved Kevin Owens show. New because of the enhanced graphics and improved because of what he’s wearing. Owens says this year, it’s all about Kofi Kingston and not KO Mania. And tonight, we’ll see if Kofi can keep the momentum going and face Daniel Bryan for the WWE championship at WrestleMania.

A loud “Becky” chant from the crowd.

Kevin Owens welcomes them to the show. He says no one knows better than him that friendships can go wrong. No one can get under their skin like their former best friend. A lot of things have been said and he has his little KO Show cue cards.

Owens proceeds to read reads which were said by WWE Raw champion Ronda Rousey about how she can beat them both in a handicap match. Owens says Ronda is not here but Charlotte is and Owens reads how Charlotte said Becky’s 15 minutes of fame are up and she will be back to carrying her bags by SummerSlam. And how herself and Ronda are the chosen ones and how Becky was shoehorned into the match. Owens says the point he’s trying to make is that they have said a lot and he speaks for himself and the WWE Universe when he says no one wants to see them talk anymore. But this is the Kevin Owens show. Fight always fight but that’s not it. Tonight it’s fight Becky fight. Tonight it’s fight Charlotte fight.

Backstage in comes AJ Styles. He’s asked about his match against Randy Orton for WrestleMania. Styles says he thinks Orton has advantages that most of them didn’t havei n WWE. He’s a third generation superstar, he’s 6’5 and he never said Orton wasn’t good. He’s great. But the difference between them is Orton is a first round draft pick and Styles is a walk on. But look at him now. At WrestleMania, Orton will be standing across someone who didn’t have the advantages that he had. And how Orton said Smackdown wasn’t built by AJ but AJ isn’t going to WrestleMania to build. He’s going to tear the house down. Because he’s the phenomenal AJ Styles. Oh and good luck to Kofi Kingston tonight.

WWE champion Daniel Bryan is in the ring with Rowan. Bryan says “injustice”. Kofi Kingston being in this gauntlet match is an injustice because Kofi Kingston does not deserve the opportunity. Bryan says he knows what it’s like to have the deck stacked against him and he knows more than anyone about having the authority against him. And despite what Kofi said, that didn’t happen to Kofi. Daniel says Kofi was chosen to replace Mustafa Ali at the Elimination Chamber. He was hand picked out of the tag team division and was giving an opportunity he never earned. And in that gauntlet match and Elimination Chamber match, Kofi fought his heart out but both times Kofi Kingston lost. Kofi Kingston earned nothing. Because Kofi Kingston, unlike him, is nothing more than a B+ player. And that’s okay for all of them because for them, B+ is good enough.

With Cesaro at ring side and Big E and Xavier Woods banned from ring side, the bell rings. Sheamus pushes Kofi into the corner. The referee breaks it up. A kick followed by a head lock take down by Sheamus. He goes for the cover but Kofi Kingston kicks out. Kofi puts hie leg on Sheamus’ knee from behind and reverses it. An arm drag take down by Kofi. He goes for the cover but Sheamus kicks out.

Sheamus runs towards Kofi but Kofi lifts Sheamus up and throws him to the outside. Kofi runs and jumps over the top rope landing on Sheamus. He sends Sheamus into the ring. With Kofi on the ring apron, Sheamus hits him with a knee. Sheamus with punches to the chest of Kofi. Sheamus lifts Kofi up but Kofi lands on his feet and a super kick by Kofi. With Sheamus on the ropes, Kofi stomps on him. Sheamus trips Kofi and with the referee distracted by Sheamus, Cesaro hits Kofi with an uppercut. Sheamus goes for the cover but Kofi Kingston kicks out. With Kofi down in the ring, Sheamus with a double knee to the face. A head lock by Sheamus. Kofi fights out of it and runs to the ropes but an elbow to the face by Sheamus.

The Usos are backstage eating pancakes with Big E and Xavier Woods.

Sheamus goes for the Brogue Kick but Kofi reverses it into a cover but Sheamus kicks out. Kofi hits Sheamus with the Trouble in Paradise. He goes for the cover and gets the pin.

The referee gives Kofi a second to take a breather. Kofi runs towars Rowan but a big clothesline by Rowan takes Kofi down. Rowan throws Kofi in the corner and a big splash. He throws Kofi to the outside. Rowan goes to the outside and another big clothesline takes Kofi out. Rowan rolls into the ring and breaks the count. Rowan throws Kofi into the security rail. Rowan grabs Kofi again and throws him into the security rail. Rowan grabs a steel chair and hits Kofi with it. The referee disqualifies Rowan from the gauntlet. Rowan gets Kofi into a bear hug and slams Kofi into the ring post. Rowan lifts Kofi up and throws Kofi through the announce desk.

Samoa Joe with the Coquina Clutch on Kofi. Big E, Xavier Woods and most of the Smackdown Live locker room are backstage watching and are furious. WWE officials come out and get Samoa Joe out of the ring.

Back from commercial, Randy Orton throws Kofi Kingston into the security rail on the outside of the ring. Orton goes to throw Kofi into the ring steps but Kofi reverses it throwing Orton into the ring steps. Both men get back in the ring but an uppercut by Randy Orton. With Kofi down, Orton stomps on Kofi’s left leg. Orton goes for the cover but Kofi kicks out. A head lock by Orton but Kofi with a right hand. A chop to the chest by Kofi. He goes for a drop kick but Orton moves out of the way. Orton stomps on Kofi and throws him into the corner. Orton with an uppercut. He sends Kofi to the corner but Kofi reverses it. Kofi goes for a splash, Orton moves out of the way, Orton goes for the RKO but Kofi moves out and hits the SOS. Randy Orton rolls to the outside.

Back from commercial, Kofi is on the top rope and Randy Orton goes for a suplex. Kofi with a right hand and Orton falls off. Kofi with a cross body off the top rope but Orton reverses it into a cover but Kofi kicks out. A kick by Orton who sits Kofi onto the ropes and a DDT. Randy Orton sets up for the RKO but Kofi reverses it into a cover and gets the pin.

Big E and Xavier Woods run down to the ring and lift Kofi Kingston up on their shoulders. Kofi Kingston climbs the ropes and points to the Wrestlemania sign.

Vince McMahon’s music hits and he comes out to the ramp. He congratulates Kofi Kingston. He says that Kofi is going to Wrestlemania. He’s going to Wrestlemania as long as he can defeat one last person. The New Day are furious. Vince bans Big E and Xavier Woods from ringside. Vince says good luck.

Daniel Bryan’s music hits and out comes the WWE champion.

Bryan gets back up before Kofi. He hits Kofi with the double kicks. He goes for another but Kofi reverses it into a cover but again Bryan kicks out. An elbow by Kofi. He jumps off the top rope but Bryan moves out of the way. Bryan stomps on Kofi. Bryan with the running knee. He goes for the cover and gets the pin.