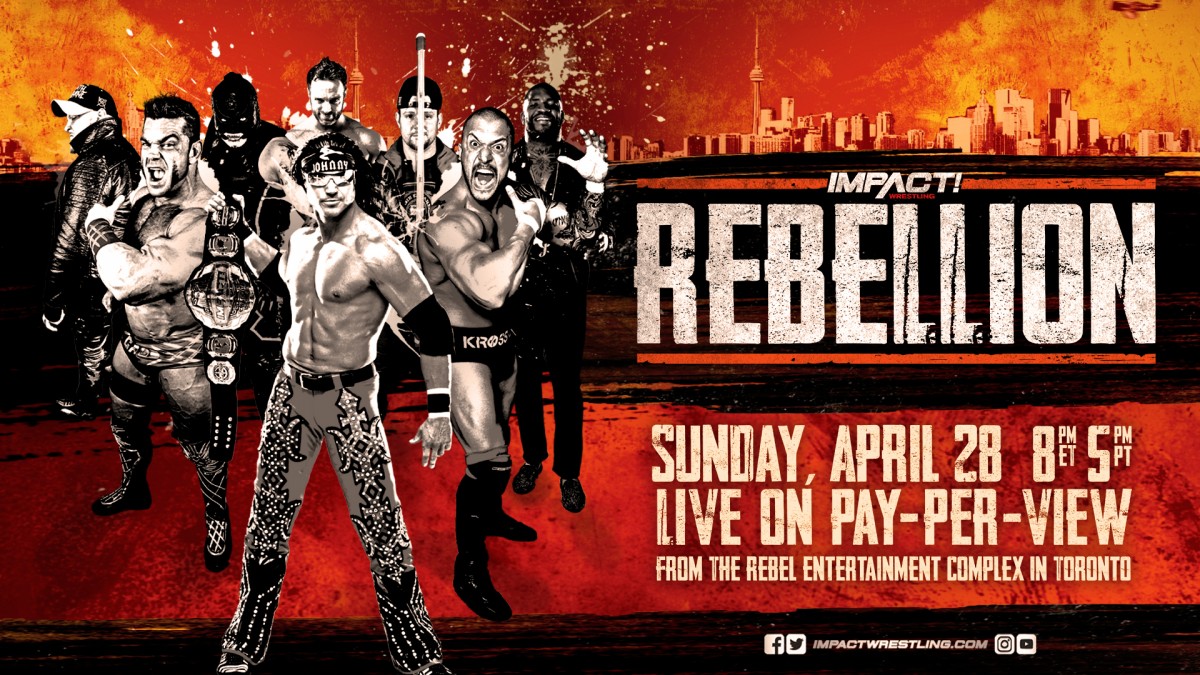 The first man to score a pinfall or submission will win the match. Petey jumps over the top and hits Eddie with a Hurricanrana on the floor. Prince is looking to fly but Ace cuts him off with a springboard kick. Jake Crist connects with a cutter on Ace, sending him crashing into everyone on the outside. Prince hits a 450 Splash on Jake Crist but Ace breaks up the pin attempt. Eddie connects with a Tiger Driver on Ace. Cousin Jake then takes out Eddie with a huge swinging slam. Petey hits Cousin Jake with the Canadian Destroyer but Ace breaks up the pin attempt and rolls up Petey to win!

Following the match, Josh Mathews announced that Impact Wrestling will be launching a new streaming service called Impact Plus on May 1st on various platforms. It was also announced that the first live event to air on this new service will be Impact and House of Glory’s co-promoted Code Red event on May 5th in New York City, New York.

A brand new platform built from the ground up to be the very best way to enjoy all your favorite IMPACT content!

It arrives May 1st! pic.twitter.com/UwkxYd9ilY

Scarlett dropkicks Raj at ringside, allowing Rohit to take control off the distraction. Scarlett locks in the crossface but Rohit powers out of it. Rohit hits the ropes but Scarlett counters with a German suplex. Scarlett launches herself off the top rope, hitting a huge crossbody! Fallah distracts the referee, allowing Scarlett to hit the low blow and a modified piledriver for the win!

Moose & The North vs. The Rascalz

The North use their power advantage to wear down Dez. Dez is perched on the top rope but Moose hits him with a dropkick, then tosses him down to the mat. Dez connects with a tornado DDT on Moose. Dez flips Wentz off the ramp into Page onto the floor. Trey jumps over the top but Moose catches him in mid-air and sends him into the steel guardrail! Dez cannonballs off the ramp, crashing into everyone on the floor! There’s a huge flurry of high-risk offense, it’s total chaos! The North hit Dez with a double team spinebuster. Moose follows up with a sick Spear to score the victory.

Winner: Moose & The North via Pinfall.

Jordynne goes on the attack right from the opening bell by charging at Taya! Jordynne takes Taya to the outside and powerbomb’s her on the apron. Taya repeatedly drives Jordynne’s arm into the steel ring post. Taya continues to target Jordynne’s arm. Jordynne begins to fight back with a series of slams but her arm is too damaged to fully connect. Jordynne hits a Muscle Buster but Taya somehow kicks out at two! Jordynne’s arm gives out on a clothesline, allowing Taya to hit the Road to Valhalla. Taya scores the pin to win the match and retain the Knockouts Championship. Jordynne suffers her first defeat since coming to IMPACT Wrestling.

oVe rules means there are no disqualifications, no countouts and anything goes! However, other members of oVe are banned from ringside. The weapons are out early as Callihan staples the mouth of Swann. Callihan hits a sick piledriver on the ring apron. Callihan connects with an Exploder Suplex into a steel chair. Swann begins to build momentum, slamming Callihan into a steel trash can. Swann hits a Hurricanrana, followed by a handspring cutter on the ramp! Callihan connects with a Piledriver into the steel guardrail for a near fall! Swann takes Callihan off the top rope into a pile of building blocks. Callihan throws powder into Swann’s face, then hits a top rope Piledriver into the building blocks but Swann kicks out at two! Swann uses Callihan’s own barbed wire baseball bat and forces him to tap out to retain the X-Division Championship.

Tessa’s father, Tully Blanchard and Gail’s husband, Robert Irvine are watching on from the front row. Tessa dives through the ropes, crashing into Gail on the floor. Gail hits a 619 on the outside. Tessa hits Gail with a Codebreaker out of the corner. Gail charges at Tessa but she ducks, causing Gail to fly through the ropes to the floor. Both competitors exchange shots in the middle of the ring. Gail gets the upper-hand with a huge crossbody! Tessa sends Gail flying off the ramp to the floor! Gail hits Eat Defeat but Tessa kicks out at two! Tessa bites Gail’s arm, then throws her off the top rope to the mat. Tessa hits the Magnum Codebreaker for a two count but immediately locks in a follow up crossbreaker to win by submission.

After the match, Gail and Tessa show each other respect by hugging in the middle of the ring. Tessa leaves and the fans chant “Thank you, Gail”.

Cage hits an F5 in the opening moments of the match for an early near fall. Johnny hits a German suplex back into the ring. Cage hits a standing Moonsault for yet another two count on the champ. Johnny sends Cage flying off the ramp to the floor with a Spanish Fly! Cage is busted open after being tossed into the steel guardrail. Meanwhile, Taya and Bravo set up a table at ringside. However, it ends up costing Johnny as Cage slams him off the apron through the table! Taya and Bravo cause the distraction, allowing Johnny to hit Cage with the title! Johnny then attacks referee Lance Storm! Bravo takes off his jacket to reveal a referee shirt but Cage still kicks out! Lance gets back to his feet and takes out Bravo! Cage connects with the Drill Claw to win the match and become the new IMPACT World Champion!

After the match, Michael Elgin makes an appearance and hits Cage with a huge sitout powerbomb! Elgin stands tall with the World Title held high above his head!

Following the match, Impact Wrestling aired a video announcing that this year’s Slammiversay pay-per-view event will be taking place on July 7th in Dallas, Texas.

Slammiversary is coming to DALLAS, TEXAS on July 7th! pic.twitter.com/k8t4dRbX41

In Full Metal Mayhem, there are no disqualifications, no countouts and weapons are encouraged! Lucha Bros dive over the top rope, sending LAX crashing through two tables. Pentagon places a garbage can on Santana’s head and both Lucha Bros hit him with in-sync superkicks. Santana hits Pentagon with a rolling cutter, followed by a Codebreaker from Ortiz. LAX hit Fenix with a double footstomp cutter into steel chairs! Both teams sit down and exchange shots in the middle of the ring until all four men collapse. Lucha Bros hit Santana with the Fear Factor Spike Piledriver into a stack of steel chairs for a near fall! Fenix hits Ortiz with a Spanish Fly off a ladder, through a table! Ortiz powerbombs Pentagon off the ladder through a thumbtack covered table to win, awarding the Tag Team Championships to LAX.

After the match, Konnan brings both teams together as they show each other respect. The IMPACT Wrestling locker room comes out to celebrate. Rebellion goes off the air.