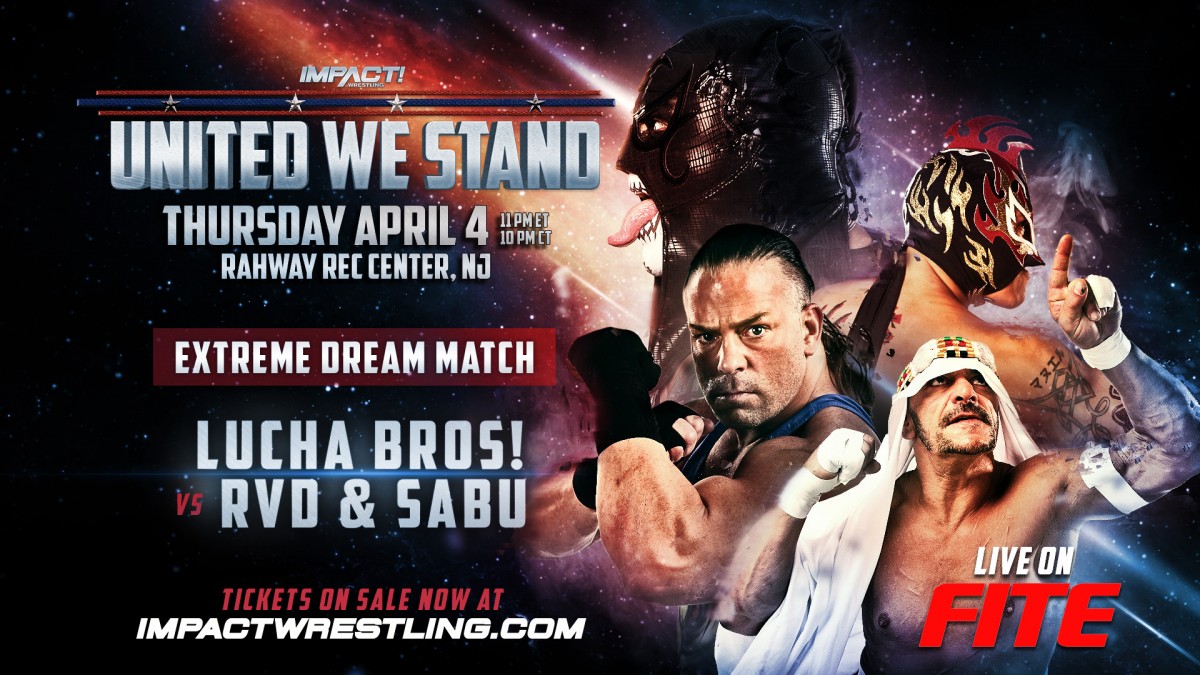 Results via Joshua Gagnon of WrestlingInc.com

Impact gets everyone hyped up, then bails out of the ring and tries to go for the X hanging above the ring. Looks for a cutter, Fox counts with a handstand. Austin looks to climb, but decides to hit a springboard spinning kick on Fox, then take Crist down with a suicide dive. Impact launches Buck into the guardrail, climbs up and tries to go for the X, but Austin yanks him down with a powerbomb.

Everyone in the ring now, trying to scale up to the top. Austin has a hand on the X, but gets pulled down to the mat. Impact tries going up against Crist follows him up, superplex hits. Buck works his way over, but Crist pulls him down on shoulders, hits a death valley driver. Everyone makes their way to the floor, Fox hits an inverse 540 to take out most of the guys. Austin climbs all the way to the very top of the scaffolding and hits a front flip on the other four wrestlers down on the floor!. Has a pretty tough landing with that one, but gets back up.

Four wrestlers all climb up and make their way to the X, all four eventually get pulled back down. Impact lands a spanish fly on Fox off the top rope. Austin wraps his feet and arms around the ropes as he tries for the X, but Crist leaps from the top rope and hits a reverse cutter! Austin is taking some nutty spots in this one. While everyone is down, Impact is able to climb to the X and grab it. The Impact World Champion can now challenge for the X Division Championship down the road.

Backstage, Eddie Edwards is getting ready for his match, Moose shows up and tells him to chill out as he tries to talk to Edwards who starts yelling back at him. Audio is messed up, so it’s tough to hear them. Brian Cage shows up and calms them down because they are already down a man.

Edwards and Aerostar get things started, quick back and forth counters that end in a stalemate. Marty and Tommy tag in, Drago makes his way in, mistimed hurricanrana. Daga and Cage tag in, dropkick on Cage, hurricanrana and Cage gives it back to him, then hits a hip toss into a backbreaker. Cage looks for a powerslam and Moose tags himself in. Moose and Cage shove each other a bit, Daga with a low dropkick, sends him out of the ring and Daga hits a suicide dive. Cage then clears out the other three members of Lucha Underground. Aerostar with a corkscrew splash, pop-up dropkick with an assist from Drago. Aerostar with a step-up flip to the floor.

Drago looks to fly, Cage stops him, then suplexes Drago out to the floor on everyone. Dreamer then gets into the ring and looks to fly, but just walks out and punches a few of them. Dream then drinks some water and spits it into Edwards’ mouth, who then sprays the other team. Back in the ring Edwards getting worked over. Cage finally gets tagged in, neckbreaker on Daga, back elbow, kick, release german suplex, cover, Marty breaks it up. Everyone hit their signature moves on each other. Cage looks to finish off Daga, but Moose hits Cage with a spear. Dreamer then nails Moose with the kendo stick and Edwards hits Moose with a suicide dive. Marty hits a butterfly DDT on Dream for the win.

Backstage, Taya Valkyrie talks about her displeasure about having to defend the title against three other women in New Jersey. Valkyrie says she will walk in and out as champion.

Rosemary gets attacked almost instantly by all three and is clotheslined out to the floor. Three-way test of strength that ends with a trio of roll-ups. Valkyrie and Forbes now teaming up against Grace, but she hits a double clothesline on them. Grace charges Valkyrie, who pulls the rope down and Grace goes out to the floor. Valkyrie goes to work on Forbes, hip attack in the corner, double knees. Rosmeary makes her way back in and tosses Valkyrie around the ring a bit, she eventually rolls out to the ring as Grace nails Rosemary with a forearm and then sends her shoulder first into the second turnbuckle. Grace with an elbow, vader bomb, cover, two.

Grace with an airplane spin on Rosemary. Forbes hits an ax kick, handspring elbow, pump kick, pin, two. Valkyrie hits a german suplex on Forbes. All four women attack each other and end up all going down to the mat. Forbes has Valkyrie on her shoulders, then tries to put Rosemary on her shoulders, but can’t hold both up. She carries just Valkyrie over and Graces takes them out with a dropkick off the top rope. Rosemary hits a spear on Valkyrie, out from the back comes Su Yung. Rosemary sees her and meets Yung out on the ramp, the two brawl their way to the back. Grace driver hits on Forbes, but Valkyrie kicks Grace away, jumps in for the pin, 1-2-3.

Backstage, Tessa Blanchard says Valkyrie may feel great about retaining the title, but Valkyrie is only the champion because of what Gail Kim. In regards to her own match, she has no problem knocking any man out and she plans on making Joey Ryan her b—- tonight.

Low-Ki and Santana get things started, Low-Ki gets the best of Santana twice in the early exchanges. Lots of trash talking early on, Martinez and Ortiz both tag in. Ortiz with a sunset flip, barely a one count. Ortiz with a modified german suplex with the bridge, two. Low-Ki and Santana back in, Santana getting worked over again, Martinez back in, jams Santana’s face into the mat multiple times, pin, two. Low-Ki back in, hits a mule kick out of the corner, pin, two, locks in a neck crank on Santana.

Ortiz brought for the hot tag, drops Low-Ki, floats over a grounded Martinez, hits a dropkick to the back of the neck. Low-Ki tries to get the best of Ortiz, but he hits him with a second rope missile dropkick. Martinez and Low-Ki recover, Low-Ki looks for a double stomp on Ortiz, Santana knocks him down. Superkick/cutter hits on Martinez, cover, Low-Ki with a senton off the top rope to break up the pin. Ortiz on Martinez’s shoulders, Low-Ki with the springboard kick on Ortiz, cover, two. Santana takes care of Low-Ki on the outside by throwing him into the ring post, Ortiz plants Martinez in the ring, pin, and that will do it.

Ryan starts the match off by asking Blanchard if she wants to touch “it” she gives him the middle finger. Blanchard with a wrist lock that gets reversed by Ryan. She breaks it and asks him “what the hell?” Blanchard grabs Ryan by the chest hair and whip him across the ring, she lands a bunch of forearms then hits a codebreaker, cover, two. Blanchard gets sent to the apron and he then sends her into the ring post. Ryan is focusing on Blanchard’s arm, he wraps it around the steel guardrail. Back in the ring, he continues to work the arm, cover, two.

Quick counters from both wrestlers, Swann finally lands a dropkick that sends Flamita out to the floor, Swann with a twisting flip out to the floor. The champ looks to hype up the crowd, which seems to be losing steam (nearing 1 am ET at this point in the show). Back in the ring, Flamita catches Swann with a dropkick, eventually sends him out of the ring, front flip over the top rope to clear out Swann. Back in the ring, Swann lands a dropkick, looks for another, nope, Flamita with a lung blower, cover, two.

Swann with a flurry of strikes, pin, two. Swann looks for a phoenix splash off the second rope, lands on his feet. Flamita with a standing spanish fly, 450 off the top rope, cover, two-count. Back-and-forth strikes from both wrestlers, handspring cutter on Flamita, cover, close two-count. Flamita heads to the top, Swann stops him, standing hurricanrana, phoenix splash off the top rope, cover, 1-2-3.

Havoc with a hurricanrana that puts Callihan out on the floor. Havoc looks to fly, but instead staples Callihan with a staple gun. Callihan smacks Havoc with the ring bell, then launches a chair at his opponent. Havoc ends up going under the ring for something. Callihan finds a chair and garbage can, tossing both in the ring. Havoc is already busted open. Callihan chokes Havoc with a chair, looks for a chop, but misses and hits the ring post. Callihan picks up a garbage can and flings it at Havoc.

Callihan is put down in a chair, Havoc circles the ring and ends up just poking Callihan in the eyes. A chair is then sent Havoc’s way. Both end up on the apron, back-and-forth attacks, Callihan digs into Havoc’s eyes, hits a piledriver on the apron. Callihan finds another staples and eventually staples Havoc’s forehead. Callihan is getting some newspaper and staples them to Havoc’s arms and forehead. A frying pan makes its way into the match as Havoc gets smacked a couple times with it. Callihan now brings in some lemons and puts it into Havoc’s cut on his forehead. Callihan puts a trash can over Havoc and smacks it.

Crowd fairly split for this one as both teams taunt each other a bit. All four wrestlers go at until a stalemate takes place. Lucha brothers kick Sabu and RVD out to the floor, they look to fly, but Sabu and RVD both move. They pull the brothers out to the ring, Sabu already using a chair on Pentagon. Back in the ring, Sabu with a clotheline on Fenix, RVD with a roundhouse kick. RVD bodyslams Pentagon Jr. They look for rolling thunder, RVD kind of messes up his part. RVD with a big monkey flip on Fenix, Sabu tries for the cover, two. RVD with a low dropkick to the face.

Pentagon chops Sabu and RVD, kick to the head. Double superkick to Sabu. Fenix and Pentagon go to work on RVD, pin attempt is broken up by Sabu. Table is brought into the ring, Pentagon and Fenix are put on the table. Sabu and RVD both head to the top rope, double leg drops, cover, kick-out at two. Steel chair strike to RVD that sends him to the floor. Sabu is on the receiving end of double superkicks, fear factor (double stomp/package piledriver combo) lands, cover, 1-2-3.

Winner: The Lucha Bros via Pinfall.